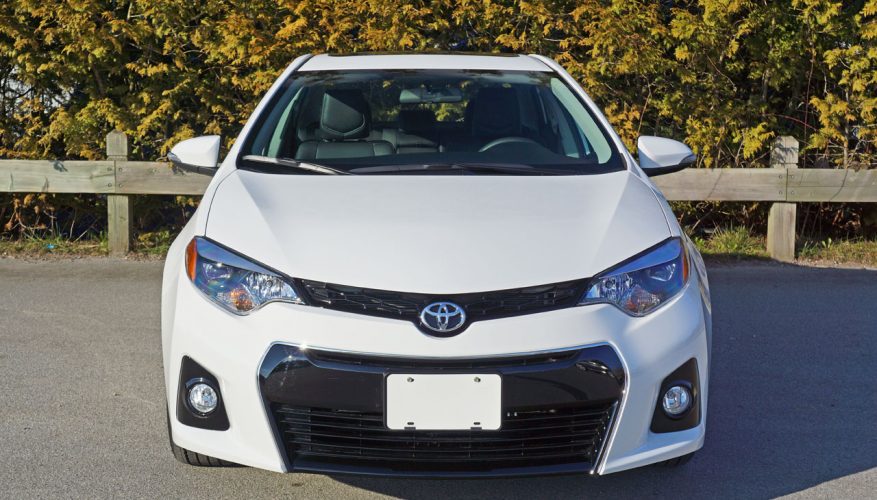 By: Trevor Hofmann
The newest Corolla is in its second year, but I still find myself saying “That’s a Corolla?” every time I see one drive by. Recently it was me on the inside looking out, mind you, and believe me when I tell you that the view from this angle is at least as impressive as the popular car’s exterior styling.

Yes, the Corolla is ridiculously popular. Toyota Canada sold 48,881 Corollas last year, which was the third best year the car has had in the past 10. It’s also the third bestselling compact in Canada, but it should be noted that it achieved its 2014 sales total with just with one four-door sedan model. Its main rivals marginally surpass the 50k threshold, but they do so with multiple body-styles under the single nameplate, from less sought after two-door coupes to very popular five-door hatchbacks. If you want a sporty two-door Corolla you’ll need to walk over to the Scion side of the showroom where the tC is parked, whereas the upcoming Scion iM replaces the recently discontinued Toyota Matrix, which was effectively a Corolla five-door wagon.

The Corolla is proof positive that compact four-door sedans are what most people want in Canada and the US, while this side of the border it’s also TCI’s best selling model, adding up to more than a quarter of all Toyotas sold here last year. The Yaris might be less expensive, but the Corolla outsold it by more than five to one in 2014, whereas the Corolla outsold the Camry, Toyota’s best-selling car in the US, by three to one here in Canada. Even RAV4, which seems to pop up around every corner, sells at about three-quarters the rate of the venerable Corolla.

There’s reason for its popularity, of course. Corolla is one of the most trusted names in the industry. While flying from YYZ to YVR a number of years ago I met a partner in a Toronto law firm who was doing very well financially, yet had just purchased her fourth Corolla. She bought her first one way back when she was in law school, and it was obvious that had been a considerable time prior. When I asked her why she hadn’t upgraded to a Camry, Avalon or even a Lexus, any of which she could easily afford, she told me that her Corollas had been so good to her over the years that she wasn’t willing to take the chance on a car that might not live up to the reliability she’d experienced, and possibly leave her stranded on the DVP or Gardiner Expressway in the thick of traffic. I’ve suffered through rush hour on these two corridors many times, not to mention the 401 and many of Vancouver’s ever-clogged arteries, so I don’t blame her for choosing dependability over something with more performance, luxury or flash. Then again, Toyota hadn’t created the current Corolla S yet, which gives you all the storied reliability with much more style than anything previously wearing the Corolla badge.

The Corolla S looks fabulous from nose to tail, its front fascia getting a unique styling treatment for a more assertive stance, the narrow upper grille blending into multi-angle headlights, the deep and wide chrome-rimmed lower grille highlighted by a gloss black bumper cap and outer edges, and circular fog lamps surrounded in the same glossy black finish. My tester’s optional 17-inch machine finished alloys with black painted pockets complemented the design while looking decidedly sporty (the stock S gets 16-inch steel wheels with covers, so you can personalize it with your own aftermarket rims or any of Toyota’s TRD alloys if desired), and body-colour mirror caps with integrated turn signal repeaters further enhance the compact model’s upscale appearance. Toyota has trimmed out the rear end with a nice deck lid spoiler above the same curved and angled taillights that make the regular Corolla look so unique and attractive from behind, while S trim gets a sportier diffuser-style lower valance fitted with a single chromed exhaust tip.

Inside, the S is once again upscale for the class and quite sporty. I love the blue pinstripe that extends across the dash and then spans each door panel, highlighted by a nice satin silver accent line in the S. The metallic black gloss surfaces on the dash are good looking too, and thankfully different from the piano black lacquered look that’s now way overused and therefore hardly special anymore. Soft-touch surfaces include a leather-like dash top, with nice stitched detailing on its edges, while the instrument panel facing is also a high quality synthetic that starts to the left of the steering column and stretches underneath the infotainment system and onto the dash panel ahead of the front passenger. The doors have soft inserts too, incidentally, with nice thick padding underneath, while the armrests are done out in comfortably padded and stitched leatherette.

The Corolla S seats are also impressive. They look like the chairs in premium branded sport sedans thanks to grippy cloth inserts detailed out in a black and grey pattern with a tiny light green fleck, these rimmed by thick leatherette bolsters stitched in contrasting medium grey thread and trimmed in grey piping.

The sport steering wheel is thick with ideally placed thumb spats, and of course wrapped in leather with exposed stitching for grip. My tester was fitted with the Corolla’s continuously variable automatic, so a set of paddle shifters allowed much more driver engagement than most cars in this class offer, while the new CVT does a decent job of finding its pseudo gears.

Sport mode helped a lot in this respect. When you press the “SPORT” button, which is located on the lower console next to a button for turning off the electronic stability control system, both switches situated directly behind the shift lever, four things occur: a sport mode indicator shows up in the primary instrument cluster, throttle response is more immediate and the unique CVTi-S “gearbox” uses modified program mapping so that engine revs are able to spin closer to redline before shifting, both improving acceleration, while lastly the electric power-assist steering is adjusted for a sportier feel. The drivetrain defaults to normal mode when restarted, which is good as you won’t want to be wasting fuel by revving the engine unnecessarily. Last year I tested the Corolla S with the nicely sorted six-speed manual that comes standard, and while the DIY gearbox remains my personal preference due to its fully and completely engaging experience, I totally understand why most people opt for the CVTi-S. It’s miles easier to use around the city and its slight fuel economy improvement is difficult to argue against.

With fuel economy as thrifty as this, you might be able to guess that the Corolla doesn’t pack a lot of weight under the hood. It’s DOHC, 16-valve 1.8-litre four gets dual variable valve timing with intelligence (VVT-i) for a total of 132 horsepower and 128 lb-ft of torque, which is the exact same performance offered in the base Corolla CE model. The irony in the new Corolla’s story is found in the aforementioned fuel-friendliest LE ECO CVT model, an obviously eco-focused four-door that packs 140 horsepower albeit slightly less torque at 124 lb-ft. The brainiac (no doubt a committee of brainiacs) who decided the sport model should incorporate a less powerful engine than the eco model should get an Einstein award, but I digress.

Truth be told, the less powerful Corolla S engine is still capable of chirping the front tires on its way to car impounding speeds. It zips to highway speeds quickly enough too, while it can cruise all day with power to spare for overtaking maneuvers when called upon. The Corolla S is plenty of fun through the curves too, its upsized standard 205/55R16s doing a good job of maintaining their line through tight corners, whereas the even meatier optional 215/45R17 Firestones on my tester were downright sticky, certainly making the most of the Corolla’s stock MacPherson strut front and torsion beam rear suspension setup. An available Corolla S bonus comes in the form of optional rear disc brakes that deliver better stopping power, especially after repeated stomps.

Those Corolla S extras come as part of a $1,750 Upgrade package that also includes automatic climate control and a powered tilt and slide glass sunroof. The S package already adds $3,605 over the base Corolla’s $15,995 window sticker, all trims also including a freight and pre-delivery prep charge of $1,520. The CVTi-S adds a mere $985 over the six-speed manual, a reasonable price to say the least, and I should also mention that the additional cost of the S package doesn’t only improve performance while enhancing styling from the outside in, but it takes a step upward in equipment levels too.

You can get more features if you upgrade to the Technology package, which will cost you $3,915 over the base Corolla S and includes everything you get in the Upgrade package plus proximity-sensing access with pushbutton ignition, an electrochromic auto-dimming rearview mirror with an integrated compass, satellite radio, a navigation system, an eight-way power-adjustable driver’s seat, and SofTex leatherette upholstery.

SofTex is Toyota’s proprietary thermoplastic polyurethane leather-like seat surfacing by the way, a treatment that provides better breathability and thermal qualities than vinyl, not to mention a slightly more realistic feel. Toyota claims SofTex is up to 10°C (18°F) cooler than similar upholsteries due to its infrared reflective capability, but I must admit to preferring the cloth/leatherette seats that came in my Corolla S tester.

This year only, you can also opt for a 50th Anniversary Special Edition Corolla that celebrates five decades of Toyota in Canada. As you can imagine the theme is mostly red with unique red stitching inside and the option of Absolutely Red exterior paint, while upgraded rear discs get framed by a set of cool looking black gloss finished 17-inch alloys (red alloys would’ve looked a bit strange). TCI offers this package with the auto climate control and powered sunroof too.

These features, along with its strong body structure, contribute to top “Good” ratings by the US Insurance Institute for Highway Safety for all crash test categories except the small front overlap test in which it scores “Marginal”, or in other words not very well. The “M” is identical to Chevy Cruze and Kia Forte IIHS crash test results, but worse than most rivals that either score an “A” for acceptable or best “G” rating. Toyota will want to address this. The US National Highway Traffic Safety Administration, however, awarded it five stars where the IIHS gave its marginal score, and only four stars in rollover tests where the IIHS showed “Good” results. It received five stars for side impact as well as the NHTSA’s overall rating.

On a much more positive note, J.D. Power and Associates gave the 2012 Corolla top honours in its 2015 Vehicle Dependability Study, a survey that looks at reliability over the last three years of ownership. Toyota, Scion and Lexus took seven out of 19 top model positions in this study, two of which were based on Corolla underpinnings. Toyota as a brand placed third amongst 31 competitors. It was also the highest placed mainstream volume brand, only beaten by its own premium Lexus nameplate and GM’s Buick division. Scion, incidentally, landed in the top 10, ahead of every Toyota competitor except Honda.

It’s difficult not to like the new Corolla, its sportiest S trim line and noted Upgrade package making it one of the more desirable cars in the compact sedan segment. Thinking back to the lawyer I met on the plane, oddly enough while returning from a Corolla launch event held outside of Toronto, I wonder which Corolla trim she’s driving now? A Corolla S perhaps? Or maybe the more powerful and thriftier Eco model. Either way, I’m sure she’s still comfortably confident about getting to work on time. The Corolla inspires such trust and therefore deserves its ardent loyalty.
©(Copyright Canadian Auto Press)
Car Shopping Tools