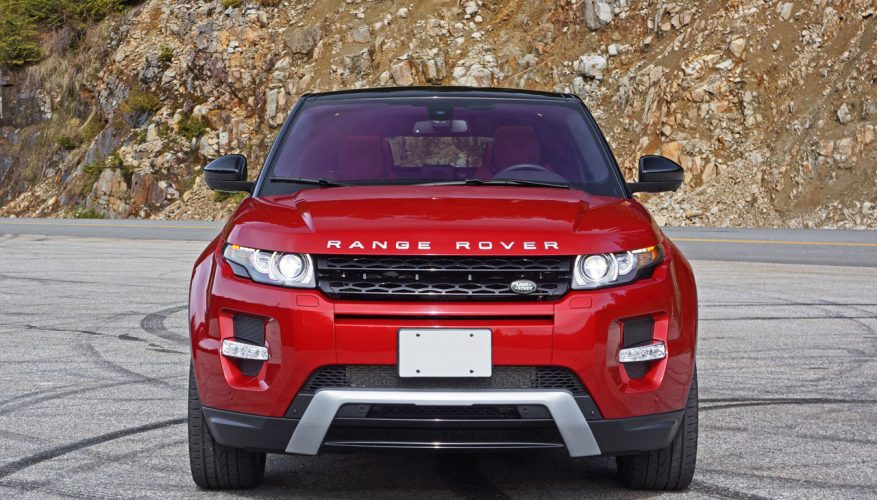 By: Trevor Hofmann
When the Range Rover Evoque originally wowed Detroit auto show-goers as the Land Rover LRX Concept in January of 2008, nothing else existed in the truly compact premium crossover segment. Certainly BMW had its X3 whereas Audi and Mercedes-Benz had just started producing their Q5 and GLK respectively, but these were near mid-size models in comparison to the diminutive CUV that would soon become Evoque.

The production Evoque hit the road in 2011 as a 2012 model and I could hardly wait to get my hands on it, my first weeklong test being in a three-door coupe version. Looking long, low and sleek despite its abbreviated dimensions, its measurements being 4,371 mm (172.1 inches) long, 1,985 mm (78.1 inches) wide (with the mirrors folded), and 1,605 mm (63.2 inches) tall while riding on a 2,660-mm (104.7-inch) wheelbase, it was the hot hatch of premium SUVs, a beautiful bit of Brit kit that turned heads quicker than anything else in the LR or RR lineup, let alone any of its competitors.

Despite the early Land Rover concept, BMW was first to make waves in this more diminutive compact premium market by arriving in 2009 with its slightly longer albeit narrower X1, whereas Mini hit the road with its smaller yet taller Countryman the year after that. Audi joined the Evoque’s production debut in 2011 with its longer and narrower Q3 (although this model didn’t arrive in North America until late last year as a 2015 model), followed by Buick with its Chevy Trax-based Encore in 2012 (currently the smallest albeit second tallest CUV in the luxury segment), and Mercedes-Benz with its longer yet narrower GLA in 2013. Infiniti will soon compete with its QX30 (expected to be the smallest yet one of the tallest entries in the segment if it ends up similar in size to the Nissan Juke it’s based on), and who knows how brands like Acura (something pulled from the new HR-X perhaps? CDX is the rumoured name), Cadillac, Lexus, Lincoln and Volvo will respond.

You may have noticed a common theme in the competitive dimensions mentioned above: the Evoque is wider than anything else in its class. And we’re not just talking a few millimetres here, but real noticeable width that results in much more interior space for shoulders and hips let alone reasonably comfortable three-abreast rear seating. This doesn’t affect its maneuverability around town as it’s not as long as most rivals, helping it slot into “Small Car” parking spots or those curbside gaps between big trucks and smaller cars you wish you had something short enough to fit into.

As for ride comfort, you’ll easily notice uneven road surfaces and poorly executed pavement patchwork as the Evoque is firmly sprung, but this said it’s never unpleasantly rough or jarring to the senses, resulting in good around town comfort levels. The Evoque’s real skills become evident when trying to get somewhere quickly, its point and shoot capability allowing quick lane changes and rapid-fire acceleration for dodging through clogged inner-city traffic.

The little Range Rover is even more enjoyable when all that traffic disappears. Photos necessary, the big parking lot atop West Vancouver’s Cypress Mountain ideal, we made our way out of the congested downtown core, cruised through the majestically treed Stanley Park causeway, took in the breathtaking view from Lions Gate bridge (which never gets old), sped up Taylor Way to the Upper Levels Highway where we crested the North Shore enjoying spectacular ocean scenery far below, and finally wound our way up the ribbon of three-lane roadway the leads to the Cypress ski area.

That high-speed stretch of long sweepers and doglegged hairpins is where the Evoque came alive, its direct-injection turbocharged 2.0-litre four-cylinder utilizing all of its 240 horsepower and 250 lb-ft of torque while the new class-leading adaptive shift program enhanced nine-speed automatic was much more engaging than the old six-speed unit I previous tested, needing more flicks from the fingers when set to manual mode but always maintaining the engine’s sweet spot to optimize performance for a thoroughly satisfying process overall, especially with the Drive Select system’s Sport mode turned on. Land Rover claims a 7.6-second sprint to 100km/h and top speed of 217 km/h (135 mph), the first number respectable and the second unwise to verify.

High-speed handling is really the Evoque’s forte, mind you. It feels more like a sports coupe than the crossover utility its outward appearance suggests. The harder I pushed the more it seemed to lock into place, my Dynamic-trimmed tester’s meaty 245/45R20 Continental Cross Contacts doing their part to straighten each and every curve we powered through. Full disclosure required, while active differentials and torque vectoring make the all-wheel drive system on any Evoque ultra-capable, my loaner came equipped with Adaptive Dynamics, a $1,000 option featuring Terrain Response and advanced MagneRide to optimize handling whether on pavement or off the beaten path, the system automatically detecting the ground surface and setting the dampers appropriately. The adaptive suspension, wide rubber and generally good mechanical dynamics of the Evoque, not to mention a relatively light 1,670-kilo (3,682-lb) curb weight thanks to prodigious use of high-strength steel throughout, aluminum for the hood and roof panels, polymer and composites for the front fenders and tailgate, etcetera, combined for superb performance, making this my top recommendation in the class if tackling the twisties, or better yet, hitting the trail is your idea of a good time.

To that end, Terrain Response gathers information from vehicle speed, individual wheel speeds, longitudinal and lateral acceleration, cornering yaw rates, throttle position and brake pressure to provide the best possible traction in a given situation. Depending on road or trail surface you can switch from general to grass, gravel or snow modes for tackling the rough stuff, and when on pavement just leave it to its own devices. The on-demand system monitors overall vehicle dynamics and when required automatically activates four-wheel drive within 300 milliseconds. What’s more, at constant speeds above 35 km/h it automatically decouples 4WD to reduce driveline drag and therefore save fuel, the result being five-cycle EnerGuide-rated fuel economy of 11.3 L/100km in the city, 7.9 on the highway and 9.7 combined.

If its exemplary on- and off-road capability didn’t already set it apart from compact premium competitors, the Evoque’s absolutely gorgeous interior is in an entirely different league. And it’s not just in the quality of materials used, but rather the overall design that’s so stunning. Certainly Range Rover hasn’t skimped on finishings, such as the high-grade soft-touch padded dash top, the same material used on the dash facing, albeit stitched in red instead of black. That red comes as part of a no-cost Ebony and Pimento interior colour option (beige is also available) that includes the same perforated grain leather albeit with Pimento contrast stitching on the dash and armrests instead of black, as well as Pimento centre seat panels and door inserts, a sporty combination that ideally matched up with my loaner’s Firenze Red metallic exterior paint.

Back inside, the Evoque’s door uppers are made from a nice soft synthetic as well, but such is par for the course in this range of vehicle, as is the harder plastic used on the lower portions of each door, plus the lower portions of the dash and console. This said, beautifully textured aluminum trim spans the upper portion of the dash, the lower sides of the centre stack and lower console. Aluminum circles the speakers and covers the speaker grilles as well, while comprising the door handles and ringing most of the switches and knobs. Press the ignition button and the aluminum-rimmed rotating gear selector rises up out of the lower console in similitude of a Yes in the Round stage, an audio-visual experience that most who can afford to buy into the Range Rover brand may remember from the seventies.

On that note all of Evoque’s switchgear is superb, without even the tiniest bit a side-to-side wiggle from any of the buttons on the centre stack or steering wheel, unlike some of its German peers. They’re ideally damped too, while the electronics many of these buttons connect through to are top-tier equipment that measures up to anything else in the segment. From the full-colour infotainment display with integrated navigation and back-up camera to the upgraded 825-watt 17-speaker Meridian surround sound system in my Dynamic tester, plus of course the elegant way Range Rover designed the Evoque’s interior and put everything together, there’s a rarified sense of occasion in the Evoque that none of its peers match up to. It truly is a Range Rover in every sense of the name.

I should mention that not everything you see here in the photos is base equipment. You’ve heard me banter around the Dynamic name a couple of times, one of six trim levels with the five-door model, including Pure at $47,695, Pure City at $49,895, Pure Plus at $52,195, Dynamic at $60,895, Prestige at $61,295 and Autobiography at $64,595. Each move up the respectability ladder doesn’t only mean additional features, but in the case of my Dynamic loaner includes styling enhancements that set it apart from those below and above, such as a unique grille, bumpers, sills, tailpipes, the option of contrasting roof and spoiler colours, and optional premium sport interiors that Land Rover says are “based on a darker, moodier environment” featuring “unique sports detailing.” The Dynamic menu also includes special Oxford grained leather with perforated seat inserts, a perforated Oxford leather-wrapped multifunction steering wheel, textured aluminum accents, unique carpeted mats with edging, proximity-sensing keyless access, illuminated Range Rover tread plates, gloss black mirror caps and adaptive HID headlamps with LED signature DRLs.

My tester also included the $1,200 Driver Technology Package that adds blind spot monitoring with closing vehicle sensing and reverse traffic detection, plus lane departure warning and traffic sign recognition, while those 20-inch tires I mentioned earlier rolled on a unique set of six-spoke ‘Style 601’ rims with vibration polished finish adding a cool $2,500 to the bill. The roof is normally body-colour, by the way, but mine was done out in Santorini Black at the cost of $650, while a $200 gloss black Aeroflip rear spoiler finished off the look and a $275 Ebony Morzine black headliner carried that theme inside where those heated rear seats I mentioned earlier added an extra $500 to the bottom line. These additions, which also included $1,200 for metallic paint, totaled $7,525, pushing the price of my Evoque Dynamic model up to $68,420, plus $1,575 for freight and pre-delivery prep.

The seats I mentioned in the previous paragraph are simply fabulous, incidentally. Truly some of the most supportive of any I’ve tested in this class. When I say supportive, they’re not only comfortable but totally hold backside and buttocks in place while executing sharp fast corners. The seats in back are also quite comfortable and as mentioned are roomy enough for three, whereas cargo space is more than adequate at 575 litres (20.3 cubic feet) with the 60/40 split rear seatbacks upright and a commendable 1,445 litres (51.0 cubic feet) when they’re laid flat. That last point might be my only complaint, or more specifically my request for the flexibility for 40/20/40 split rear seatbacks that allow skis down the middle and two more comfortably seated people at each side, both capable of enjoying the heated rear cushions. On the positive, the Evoque will haul up to 500 kilos (1,102 lbs) of payload when called upon, and if towing a small trailer is required it’s good for 1,595 kg (3500 lbs).

So you see, you don’t have to go without luxury, performance or utility if you’re trying to make a smaller carbon footprint on terra firma. The Range Rover Evoque continues to lead its compact crossover SUV segment in style, on- and off-road performance, overall opulence and prestige.