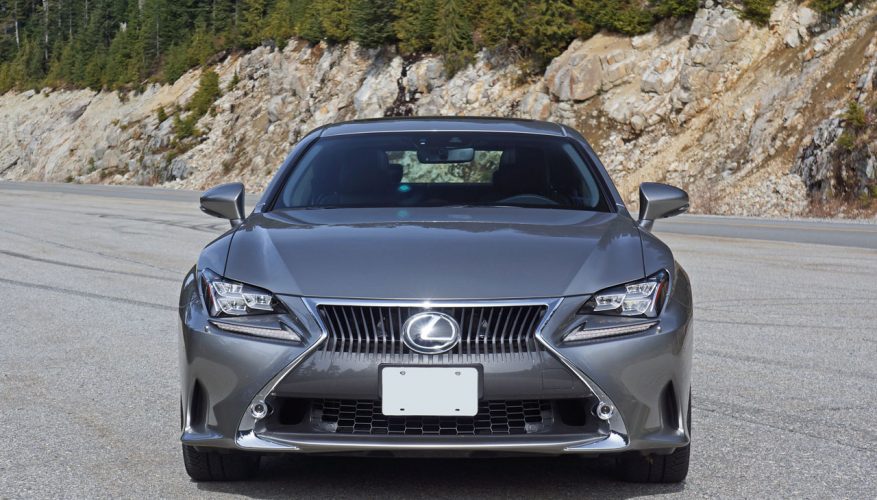 By: Trevor Hofmann
Lexus’ IS lineup has included a sedan and retractable hardtop convertible for some time, but no fixed hardtop two-door model. And this while its premium competitors clean up in the personal sports coupe segment.

Audi has its A5/S5 coupes, BMW its legendary 3 Series/M3 Coupe, which was recently renamed 4 Series/M4, not to mention a slightly smaller 2 Series two-door, and Mercedes-Benz added a C-Class Coupe to its lineup a few years back. Lexus’ Japanese rival Infiniti has long offered the G35/G37 Coupe, now dubbed Q60, while Cadillac gives North American patriots (and other global patrons) the option of a very stylish ATS Coupe as well as the new Chevrolet Volt-based electrified ELR coupe. Even Land Rover makes a “sport coupe” with its two-door Range Rover Evoque, not to mention new premium four-door coupes are available from luxury brands in the compact segment. Yes, it’s about time Lexus anted up with a compact sports coupe of its own.

Enter the new 2015 RC 350, RC 300h and RC F, three models that share components with the IS sedan. The first and last are available in North America whereas the second is not, but instead goes up against competitors’ diesel offerings in Europe and other markets where much higher fuel costs and carbon tax issues dictate product offerings. The RC 350, available in rear- or all-wheel drive, uses Lexus’ ubiquitous 3.5-litre V6 tuned to an almost identical 307-horsepower and 277 lb-ft of torque as the IS 350, whereas the RC 300h makes use of the same 2.5-litre inline-four and Lexus Hybrid Synergy Drive system offered in the ES 300h, albeit tweaked to deliver better performance. The infinitely sportier RC F utilizes the old IS F sedan’s performance-tuned 5.0-litre V8, albeit now sending a hair-raising 467 horsepower to the rear wheels instead of 415, while adopting a version of the lightning quick-shifting ZF eight-speed automatic.

A version of that eight-speed gearbox comes standard with the RC 350, but only when you opt for RWD. My tester came in RC 350 AWD guise, which means that it made due with a less enticing six-speed automatic, but I’ll get to that in a moment. Ahead of this issue I simply must talk styling and proportions.

The profile is low and steeply raked towards the rear where an abbreviated deck lid almost immediately melds into an integrated rear spoiler which flips upwards just above a stunning set of taillights that can’t be compared to anything else on the road. Beautifully sculpted lenses of red and clear white might be considered jagged if they weren’t so elegantly penned, but either way they look wickedly fast even when motionless. The ’80s side strakes jutting out of the rear fender vents might have something to do with this inert speed phenomenon, a possible ode to the Ferrari Testarossa Don Johnson made forever famous in Miami Vice, not to mention slant-nosed 911s of that time or just about any other exotic or tuned premium car from the era. Either way the look works as well with the RC as it does with the new NX. A sweet set of 10-spoke 19s shod in 235/40 Michelin Pilot Alpin PA4 winters looked fabulous and would have been the perfect fit if we’d had any snow this year, but despite getting excellent all-round ratings and performing admirably in the dry, they weren’t anywhere near as sticky as a decent set of performance tires such as Michelin’s Sport PS2s.

Making this Achilles’ heel apparent was one of my favourite mountainside romps, a two- and three-lane ribbon of tarmac that winds its way up to the parking lot of a local ski hill. With the sun bearing down, pavement heating up and no snow or even dampness in sight, my RC 350 AWD tester nevertheless made good use of its all-wheel drive by maintaining grip on melting rubber. The rear end tried to slide much to my delight, courtesy of the Vehicle Dynamics Integrated Management (VDIM) off button, but the front tires automatically took control and kept me on the curved and narrow. These aren’t the stock tires, by the way, those being Bridgestone all-seasons. Lexus smartly adds winters to their press vehicles during the colder months and any other year we’re all thumbs up in gratitude, but this brings up a good point when it comes time to re-shoe your ride. Rather than go with a tire that tries to do everything and comes up short all-round, when OEM replacements are required consider a set of summers in summer and winters in winter. It costs a bit more initially, but shouldn’t add any more to your long-term budget other than the price of swapping them over each season, while delivering much better traction when called upon.

Despite the softer rubber compound and wider spaced tread pattern the RC 350 AWD tracked as brilliantly through long fast-paced off-camber corners as it held its lane during doglegs taken at “slightly higher than posted” speeds – ahem. The odd thing is that it feels like a comfortable cruiser around town and on the highway, just an ordinary Lexus, which I must say is extraordinary at such tasks compared to many other cars. Yet when you let it loose on an empty backcountry road it’s as quick and capable as its racy styling suggests.

Such relaxing moments on the highway or trolling through town are ideal for fully appreciating the RC’s phenomenal interior. If you remember how I was literally taken aback by the NX’ cabin I enjoyed late last year, I was even more impressed by Lexus’ latest attempt to sway premium buyers their way. First of all, forget everything you once knew about Lexus’ staid and conservative past, because the new RC’s interior design and execution is as provocatively beautiful as its exterior sheetmetal. Gentle curves fuse with razor sharp angles for an edgy tech-centric cabin that’s both visually stimulating and highly functional. Rather than name each area covered in high-quality soft synthetics it’s easier to inform about surfaces that aren’t, the lower dash and lower door panels. White contrast stitching highlights the leather-trimmed hood over the primary instruments and some of the door panel detailing, which matches the leather-wrapped steering wheel and perforated leather seat upholstery, while genuine shimamoku wood trim and real metal accents are tastefully applied for a thoroughly luxe experience.

Touch-sensitive LED overhead lamps shine a soft white light over everything at night, illuminating all that’s not already internally backlit. The latter includes simple yet elegant chronograph style gauges, a recessed gloss-black infotainment screen that’s perfectly flush with the surrounding framework for a high-end finish, a beautifully detailed horologist’s delight between the dash vents, a narrow LCD display atop the perfectly rectangular matte black HVAC/audio panel, the latter complete with real metal knobs, and a multicoloured gear selector display next to the shift lever. Just behind the shifter is my new favourite infotainment controller: Lexus’ revised Remote Touch Interface.

RTI 1.0, which is still being used in some of the brand’s models, is more like a joystick with a large cap on top. You move it around and the cursor on the infotainment screen follows, “clicking” into place via haptic sensors when it finds a link to a given function. Push down and it follows the link to the chosen category or executes a command, just like your computer at home. RTI 2.0 is even better, as it’s basically the same type of touchpad used on laptops. It delivers a more accurate response to input and arguably a more appealing design. The touchpad is sectioned into quadrants, appearing as if it’s a sight for dropping bombs, no doubt playing up the stealth fighter image Lexus’ new design language emulates. What matters is it all works ideally, from the touchpad to the functionality of the infotainment system itself.

Examine any section of the instrument panel, lower console or switchgear on the door panels and the RC satisfies. For instance, the gaps between the buttons surrounding the rotating dial for selecting the Drive Mode Select system’s Eco, Normal or Sport settings are extremely fine and perfectly aligned, while each button fits tightly and is nicely damped. Inspect one of its German competitors as thoroughly and you may not be so impressed.

Settle into the superbly comfortable and ideally supportive driver’s seat, which like its partners uses a new integrated foam construction process, wrap your hands around the small but thick leather-wrapped steering wheel, choose your favourite audio track, rotate the drive mode selector into Sport, slot the leather and aluminum clad shifter into manual mode, rest your fingers on the backside of each aluminum paddle, and dig into the throttle. The RC’s 3.5 responds with a muted growl followed by significant bite from each corner, its launch from standstill to obscured sideline scenery exhilarating and ability to zip past a humbled warning into pricy ticket territory before racing towards impoundment all too easy. It’s just that the ultimately stable RC makes fast travel an almost casual affair, complemented by as-mentioned road-holding that’s so thoroughly capable and wonderfully entertaining you’ll likely never feel out of your element unless you’ve truly pushed the rules of driving engagement beyond any reasonable understanding of inertia and adhesion. With the RC, Lexus has built a sports coupe that can be driving quickly by those with mere adequate skills, while easily keeping up with its Japanese peers and German opponents.

Braking power is robust too, my twisting and undulating downhill charge from the summit of that favourite two-lane mountain stomp rife with firm centre pedal action yet rewarded with full binding power thanks to minimal fade, the RC as confidence inspiring when fast approaching a slow-to-30 hairpin as I was relaxed and blissful sweeping through a long high-speed loop, yet while wiling away the hours on the highway or sauntering through town it could almost be left to its own devices.

And here lies the true beauty of driving this car, its extreme comfort and casualness at one end and riveting performance on the other. This, along with one of the most impressive interiors in its class combined with all the expected reliability and safety a Lexus can offer makes for a sports coupe fully worthy of your undivided attention. Priced at $54,600 plus $2,045 for freight and pre-delivery prep, which is exactly one thousand fifty less than a BMW 435i xDrive and filled with more standard features, should be enough to get would-be buyers’ attention.

Again, no matter the configuration the RC 350 AWD delivers superb value, all packaged up in one of the more intriguing new sport coupes available. I can’t help but recommend it.
©(Copyright Canadian Auto Press)
Car Shopping Tools