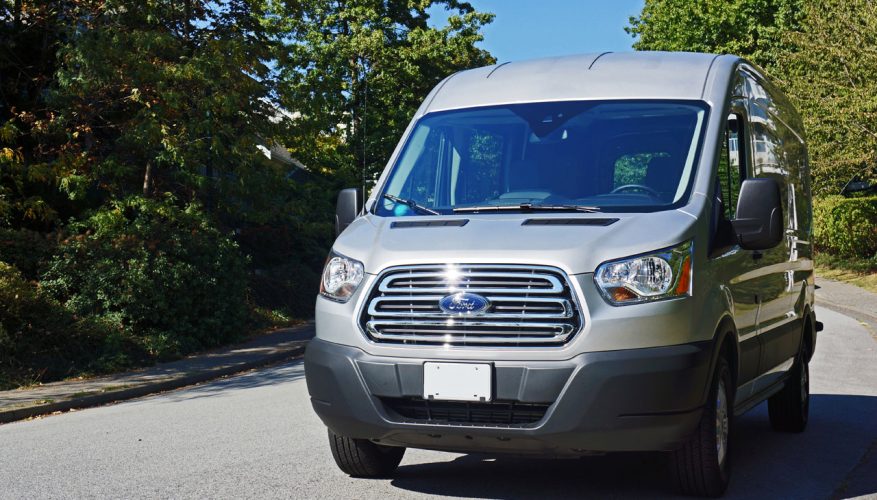 By: Trevor Hofmann
There could only be a couple of possible reasons you’re reading this review: 1) you love reading about any and all things automotive, or 2) you’re a small business owner/operator or medium to large company’s fleet manager and in the market for a new panel van(s). If you’re in the former camp, please read on and enjoy. Those in the latter lot will want to pay closer attention as the new Ford Transit truly has a lot to offer.

Transit is a new name in North America, but not so in over 110 markets on six continents, some of which have been selling it since 1965. The Econoline/E-Series has been on the market since 1961, having enjoyed best-selling segment sales for the majority of its tenure. Why discontinue a bestseller? Like many blue-oval branded models we’ve been getting lately, from the Fiesta and Euro-sourced Focus to the C-Max and smaller Transit Connect, the new full-size Transit is now in our market because of the Dearborn, Michigan-based automaker’s “One Ford” product plan that calls for a single global model strategy to simplify design and production processes and therefore reduce costs. Not every model fits this mold, the individual success of the Asian/Euro-market Ranger pickup truck and North American F-Series forcing their hand, not to mention a bevy of small to medium sized minivans/MPVs available throughout the world that replace the North American-market Flex for family duties, but for the most part the company is able to make their one-size-fits-all policy stick.

Back in 2009, Ford gave us the European-designed and built Transit Connect to service the light-duty delivery market, and it’s helped to rejuvenate a segment that is now rife with competition. The new full-size Transit enters a sector already teeming with European imports, from the Mercedes-Benz Sprinter to the new Fiat-sourced Ram ProMaster. Nissan’s NV is also vying for full-size van buyers, while General Motors’ more traditional Chevrolet Express and GMC Savana have long combined for the lion’s share of the large van market.

How is the new Transit selling in Canada? So far it’s trending similarly to old E-Series sales in years’ past, with 2015 YTD sales of the Transit at 2,477 units compared to 2,709 YTD E-Series deliveries at the end of April 2014. While a bit lower, it should be noted Ford is still selling off 2014 E-Series stock, having delivered 536 so far this year, which effectively means sales are up by 304 units for a total of 3,013 commercial vans delivered since the beginning of the year. This upward trend is similar to what rival commercial van sellers are experiencing, with GM’s twins having stronger collective sales (driven solely by GMC’s variant, as the bowtie-branded van’s numbers are down), 2014’s first four month tally rising from 2,083 units to 2,592; Mercedes’ Sprinter sales up from 1,249 deliveries from January through April 2014 to 1,446 so far this year; Nissan’s more meager NV sales increasing from 205 YTD at the close of April 2014 to 224 currently; and Ram’s growth in the segment the most rapid (which makes sense as it’s been out of the game since it lost the rebadged M-B Sprinter back in 2010), from 652 sales after the first four months of 2014 to 1,046 units sold to date for 2015. So far it appears that Ford is number one, even when combining Chevrolet and GMC brands, which is a good first sign that buyers like what the blue-oval brand has brought to market.

One of the reasons the Transit is doing so well is its ability to satisfy almost any buyer’s requirements. No less than 2,000 configurations are possible, from regular to long wheelbase versions; three lengths including a LWB-E extended body; low, medium or high roof body styles; three weight categories including 150, 250 and 350; panel versions for cargo, wagons for carrying passengers, plus chassis cab and cutaway designs; as well as XL and XLT trim levels for passenger vans. Interior volumes range from 6,985 to 13,797 litres (246.7 to 487.2 cubic feet) behind the first row of the cargo van (or 8,072 to 15,353 litres/285.0 to 542.2 cubic feet with the front passenger seat removed) to myriad passenger van cargo capacities depending on seating configurations, which can reach up to five rows deep. All of this gives the Transit “best in class” bragging rights, at least as far as variety goes, so if you want it there’s a good chance Ford’s got it.

Fuel economy is one of the Transit’s big selling points. Ford claims a 46-percent improvement when the old 6.8-litre V10 is compared to the new Ecoboost V6, both capable of similar payload and tow ratings. That’s an average fuel savings of $1,700 USD per year according to the EPA, massive money when considering the price of the new base Transit is actually $200 lower than the E-Series, now retailing for $31,799. Being a commercial vehicle there are no official EnerGuide fuel economy numbers available, so we’ll just have to take the automaker’s word for it.

And those cargo capacity numbers I mentioned earlier are also best in class, plus at maximum volume the new Transit is 75 percent more spacious than the largest E-Series van. Likewise the LWB-E 15-passenger van delivers best in class cargo stowage behind its last row of seats at 2,846 litres (6,274 lbs), whereas the best in class headroom of the high roof wagon would make the ideal team vehicle for International Basketball Association players being that each six-foot-four and under member could stand upright as he walks to his seat. The Transit’s rear door height? It’s best in class too.

If you just looked at the specs you wouldn’t think the Transit would be all that much better than the E-Series from a driving perspective as both vans have independent front suspension setups and leaf springs in the back, but getting behind the wheel proves it’s a wholly improved vehicle. I spent a week in a long wheelbase, medium roof 2015 Transit 250 with the optional 3.2-litre turbo-diesel, which added $1,650, $1,000, and $5,995 to the price respectively, and so equipped it delivered a smoother, quieter and more comfortable ride, more accomplished handling and generally better all-round drivability than the last E-Series van I drove.

It didn’t hurt that my tester was a great deal more car-like than the simpleton E, or at least it appears so from inside. Those familiar with modern-day Fords will immediately notice a similarity between the Transit’s instrument panel and many other models within the blue-oval range, and while dash and door plastics aren’t soft to the touch due to cost restrictions and the need for long-term durability, the cabin’s fit and finish is very good. Some bits, such as the audio and HVAC interface are pulled directly from Ford’s car parts bin, a good thing, while unique to the Transit are myriad storage compartments for a delivery driver’s clipboard, contractor’s laptop, worker’s lunchbox, toolkit or what-have-you.

Being that the Transit is for the most part a work van you might be surprised with some additional options, but then again I could understand why someone upgrading it for recreational use might want to opt for the $1,910 Premium package with its 10-way powered pewter leather upholstered driver and front passenger seats, if the fine print didn’t add that this feature isn’t available with the Motorhome Prep package. Go figure? It’s not available with the $1,700 Ambulance Prep package either, but at least that makes sense. Scrolling through the rest of the options menu shows that the same leather and powered seat upgrade can be added as a standalone option for $1,290, so RVers can breathe a sigh of relief.

Some additional standalone items that are not only useful but extremely well priced include fixed rear door glass for only $76, a fixed rear door and passenger side door glass combo for $150, fixed windows all-round for just $270, front map lights for $55, a CD player added to the stereo for $350, satellite radio for $200 more, Ford Telematics powered by Telogis for $853, a rearview camera for $450, a perimeter alarm for $195, a reverse sensing system for $510, long-arm powered mirrors for $210, the same with integrated signal repeaters for $376, regular sized heated side mirrors with integrated turn signals for $165, and much more.

With a new lower price, more with-it Euro styling, wholesale improvements in interior quality and features, much greater cargo and seating capacity including all of its best-in-class stats, a stronger engine lineup delivering better fuel efficiency, and years of brand dominance in the commercial van sector, Ford’s new Transit not only stands a good chance of maintaining its brand sales leadership, but might just take the overall automaker sales crown away from GM, while having immediately trounced Mercedes-Benz right out of the gate. It’s certainly worthy of its early success.
©(Copyright Canadian Auto Press)
Car Shopping Tools