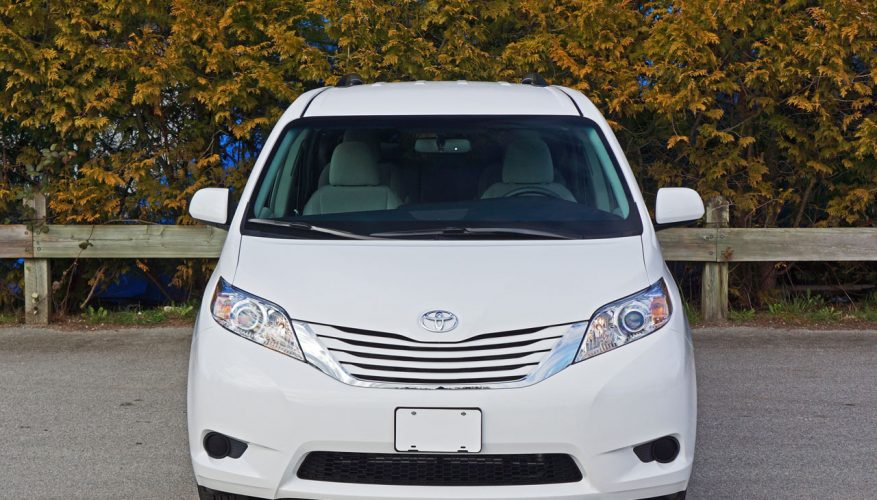 By: Trevor Hofmann
One of the best-looking minivans available, especially in sporty SE trim, Toyota found street cred with its third-generation 2011 Sienna when introduced in 2010. Now, four years later, it gets a mid-cycle upgrade for the 2015 model year.

The old adage “if it ain’t broke don’t fix it” certainly applies to the Japanese brand’s refreshed minivan, at least on the outside. Exterior styling enhancements are limited to a new headlamp cluster design, optionally infused with a thin strip of de rigueur LED running lights, as well as fashionably late mirror housing-integrated turn signals on top-tier trims, and newly designed taillight lenses.

My tester only featured two of the above, being a just-above-base LE AWD model. Nevertheless it’s a pretty classy looking ride as far as minivans go, with a body-colour grille featuring thick chrome trim around its lower half, plus clean lower bumper design with black caps where fog lights would otherwise go if so equipped. These would look a lot better if Toyota found a way to make the base van look like it wasn’t missing something, such as adding some fake brake vents, but instead base and LE models are so obviously void of fog lamps that it’s as if you’re telling the world you’re too cheap to pay for the upgrade. This was in sharp contrast to the 18-inch alloy rims at each corner, which look very upscale thanks to a bright machine finish with painted silver pockets. These wheels also come standard with Limited FWD and top-line XLE AWD trim, a nice bonus for this LE AWD model. Another Sienna highlight is the rear wiper that’s hidden underneath the rooftop spoiler, while new taillight lenses are particularly attractive. They’re the same elegant shape as the old ones, but with a cleaner lens design. Like I inferred a moment ago, it’ll take a keen eye to notice the differences between the 2014 and 2015 Sienna, but why mess with success?

Of course, it’s what’s on the inside that counts, right? Such has always been the case with family-friendly minivans, which is why Toyota has devoted most of its efforts to the 2015 Sienna’s cabin. The new van’s instrument panel has been totally reworked, the upside-down Nike swoosh (or rather right-side up Puma swoosh) now eliminated to make way for a more conventional and arguably more appealing overall design. Toyota has visually combined the primary gauges with the centre stack by stretching a rich looking padded and stitched gauge cover halfway across the dash and then surfacing both areas underneath in the same matte black before applying a new steering wheel ahead of a classic two-dial speedo and tachometer duo that bookends an available 4.2-inch colour multi-information display which can show turn-by-turn directions and more. My tester didn’t include the full-colour treatment ahead of the driver, but rather its simple and straightforward primary gauges integrated a useful 3.5-inch LCD multi-information display at centre, while the use of thick black lacquer to garnish the rims of each dial is very unique and looks great, like a designer watch. What’s more, the way the chrome and satin-silver interior trim integrates into the dash design is especially attractive.

A new centre console-mounted 6.1-inch touchscreen display audio system is now standard, and it’s one of the slickest I’ve ever seen no matter the price of the subject vehicle. Truly, this infotainment display is so ultimately simple and elegant. It’s just a single glossy piece of high-quality black plastic with beautifully simple circular dials in the same high gloss black at each side, the remaining “buttons” touch-sensitive with gorgeous blue backlit lighting. Toyota has really outdone itself with this interface. It’s filled with Toyota Apps and a handy standard backup camera. It can all be upgraded to a seven-inch infotainment touchscreen display with capacitive switches that allow driver and front passenger to swipe items “on” and “off” in XLE and Limited trims.

The audio system of my LE AWD model was also excellent for the near entry-level class of van I was driving, while the nicely laid out manual HVAC system interface incorporates a small high-resolution screen for displaying settings. Just to the left, the gearshift lever is surrounded in piano black lacquered plastic and once again equipped with manual shift mode, while reshaped air vents above and to the sides, plus other trim details combine for a look that’s decidedly more upscale than the outgoing model.

The Sienna doesn’t only look higher-end, but it feels better too with more soft-touch materials all-round, not only including the aforementioned padded strip across the top of the primary instrument binnacle and centre stack, but also covering the elegantly designed upper glove box lid with a padded soft-touch synthetic, plus the front door uppers and nicely padded inserts that meld into the armrests just below. The pull-down inboard armrests attached to the seats are covered in patterned velour, and very comfortable like the similarly upholstered seats. The lower dash and door plastics are also high in quality, nicely textured and appear like they’ll stand the test of time.

New features for 2015 include Driver Easy Speak, which places a built-in microphone near the driver for rear speaker-projected parental commands. No doubt the kids will be sighing the 10th time dad says, “This is your captain speaking…” but the intercom-like tool will be easier on the vocal chords than yelling at the top of your lungs to get Johnny to stop hitting Susie. My tester didn’t include this upgrade, but like all Siennas it came with a pull-down conversation mirror to keep an eye on those two before anything gets too out of hand.

Altogether the 2015 Sienna is available in seven trim levels, including two class-exclusive all-wheel drive models as well as Mobility versions. The all-wheel drive models get an on-demand AWD system that Toyota claims to deliver “superior driving confidence while maximizing fuel efficiency,” and I have to agree it is pretty efficient when compared to the front-wheel drive Sienna. That version is EnerGuide five-cycle rated at 13.0 L/100km in the city, 9.5 on the highway and 11.4 combined, whereas AWD only pushes the numbers up to 14.4 city, 10.2 highway and 12.5 combined.

The class-exclusive AWD benefit is superb all-weather traction and the ability to drive on sections of snow covered roadways without chains. I’ve experienced the frustration of being turned back at chain-checking road stops and knowing that if my vehicle had only included all-wheel drive I would have made it past the safety sentinels and on to my destination, which in my case would have meant a day of skiing that was missed.

While my LE AWD tester didn’t have the steering and suspension upgrades of the sportiest Sienna SE, it nevertheless felt stable and secure during fast-paced curves. The six-speed transmission’s manual shift mode made such moments more enjoyable whereas the DOHC, 24-valve 3.5-litre V6 featuring dual variable valve timing with intelligence (VVT-i) that the autobox connects to is thoroughly capable of getting you into trouble with the park ranger quickly. It makes a sizable 266 horsepower and 245 lb-ft of torque, ample for speedy takeoffs and prodigious passing power, while it’ll cruise all day long in totally relaxed, near silent, calm, cooled and collected composure. That’s what driving a minivan is all about. They’re not canyon carvers, and while certainly better at road holding than most SUVs, not to mention a great deal more comfortable and miles more useful, are ideal on the flat wide open or for shuttling around town.

Passenger and cargo capacity is any minivan’s forte, the Sienna delivering complete comfort in all of its three rows, plus 1,107 litres (39.1 cubic feet) of gear-toting space when all seats are in use. Drop each side of the 60/40-split third row into the floor and cargo capacity opens up to 2,466 litres (87.1 cubic feet), while a staggering 4,248 litres (150.0 cubic feet) can be made available if the middle row is completely removed.

This last positive brings up a critical negative, those captain’s chairs are large, awkward and heavy, and extracting them from their mounts is either a two-person job for smaller men and the majority of women or a hero’s effort followed by a trip or two to the chiropractor. For big loads you’ll want to tumble the middle seats upward and slide them as far forward as possible, but I must say this process and end result is nowhere near as effective as the ability to drop them below the floor, but sadly this option is not available.

If your yard work requires a utility trailer or a camp trailer is a regular part of your summer vacation the Sienna is capable of 1,588 kilos (3,500 lbs) in trailering weight in LE trim and above, except for top-line XLE AWD trim that gets the same 454-kg (1,000-lb) tow rating as the base van.

Sienna pricing starts at $31,040 plus $1,730 for freight and pre-delivery preparation, whereas the LE FWD can be had for $34,300 plus freight and my LE AWD for $37,125. If you load up an XLE AWD with the Limited Package it’ll pass the $50k threshold with freight, but that gives you a van that could vie for limousine status and is a heck of a lot more comfortable than most airport town cars.

The good thing about the new 2015 Toyota Sienna is that it looks great no matter the trim level, while providing a stylish well-made interior filled with a good assortment of features even in base trim. My LE AWD tester was certainly a pleasant surprise, and worthy of your investigation when it comes time to upgrade your current ride.
©(Copyright Canadian Auto Press)
Car Shopping Tools