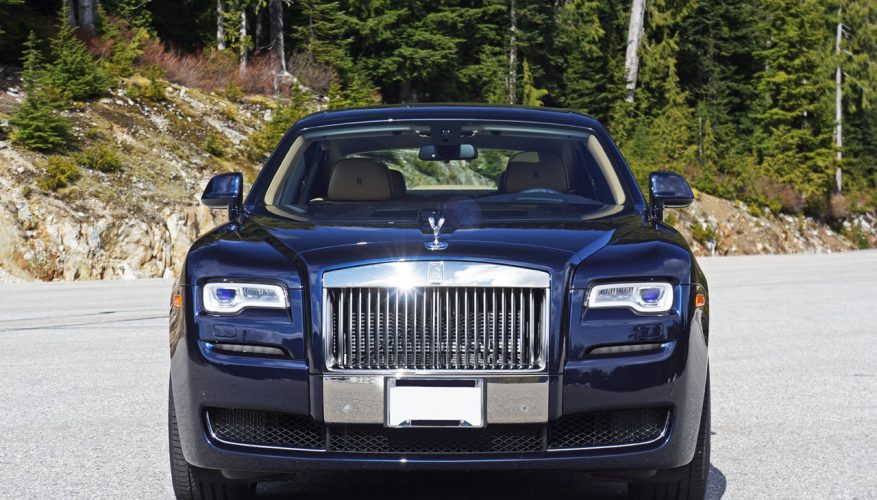 By: Trevor Hofmann
As far as four-door luxury sedans go, nothing shows you’ve arrived as adequately as a Rolls-Royce.

Mercedes-Benz is well respected as a premium brand and its new Mercedes-Maybach S 600 a thoroughly impressive luxury car, but it loses out on cachet points due to three-pointed star siblings selling in the $30k range, these vying for the spotlight with Audi, BMW, Jaguar and even premium Japanese brands, whereas Rolls-Royce only has Bentley as a true ultra-premium competitor, and due to the greater portion of last century spent as the lesser brand under parent Rolls-Royce, Bentley has long been deemed the poor man’s Rolls in the same fashion as a Tudor wristwatch is the poor man’s Rolex. This, along with the fact there are much fewer Rolls-Royce models on the road than Bentleys makes the Goodwood, Sussex-based British marque much more prestigious than anything made in Crewe, or for that matter Volkswagen’s Dresden, Germany factory where the Flying Spur is produced alongside the VW Phaeton.

The Flying Spur is the Rolls-Royce Ghost’s chief rival, a car based on Volkswagen Phaeton architecture. The Ghost shares underpinnings with the current BMW 7 Series F01/02 platform, although only 20-percent of 7 components are apportioned to the Ghost as its design is heavily modified. A keen eye will pick out small details like the plastic casings for the vanity mirrors and adjoining clips, the circular Velcro fasteners for the floor mats, etcetera, items that won’t likely put anyone off buying a Ghost as they mostly go unseen. Unlike the aluminum-bodied Phantom, the Ghost is constructed of high-strength steel and therefore weighs almost as much despite its smaller size, the base Phantom hitting the scales at 2,550 kilos (5,620 lbs) and the Ghost weighing in at 2,490 kg (5,490 lbs).

In case you were wondering, that’s a lot of poundage for any car, reason enough for a powerful engine under the hood. Where the 2,422-kg (5,341-lb) Bentley Flying Spur utilizes V8-power in base trim, the Ghost relies solely on the performance of a V12. At 6.6 litres in displacement and sporting two turbochargers between its manifolds, the Ghost’s powerplant produces 562 horsepower and 575 lb-ft of torque resulting in an almost silent but nevertheless breathtaking sub-5.0-second sprint to 100km/h.

A specially tuned eight-speed ZF automatic aids forward momentum with imperceptibly smooth transitions from gear to gear, but that’s just the beginning of its capability. Impressively, this Satellite Aided Transmission incorporates GPS and mapping data to control gear levels, which allows it to “see” beyond the corner or crest, anticipating the appropriate gear based on speed and your current driving style. It predicts the outcome, and being in control of the situation gets its predilections right more often than not, allowing higher speeds with safer outcomes each and every turn.

All the while the Ghost’s ride benefits from an aluminum-intensive multilink and adaptive four-corner air suspension that’s so sensitive it can even detect and compensate for the movement of a single rear passenger from one side of the seat to the other. My tester included optional adjustable dampers as part of the Ghost’s Dynamic Driving Package, helping it remain close to flat during hard cornering but in no way making it harsh. Truly, you’ll be hard pressed to feel any road imperfections at all, the Ghost purposely isolating driver and passengers from such untoward behaviour. You’d think with those massive 21-inch alloys on 255/40R21 Continental ContiSportContacts you’d feel every pebble, but the Ghost never exhibited such incivilities.

The Ghost is more about pampering than perspiring, its mission to quietly whisk driver and occupants along at a brisk pace with nary a disturbance from the outside world, other than opportunity to watch scenery blur past from its expansive side windows and big panoramic glass sunroof, a standard item this year. You might think said niceties should be expected in a luxury sedan that starts at $329,808, and I happen to agree, but plenty of options are still on the table. The picnic tables attached to the front seatbacks of my tester aren’t standard, nor are the contrast stitched R-R monograms on the headrests, the blue piping around their edges, the piping lining each lower cushion and backrest insert, those seats with integrated massaging action up front, whereas the extended leather upgrade even wraps the impeccably finished hides into the door jams. The ambient lighting inside the door pockets was optional too, while my car’s steering wheel had some attractive coloured accents, and the polished stainless steel doorsill treadplates were downright decadent, complete with “Hand Built in Goodwood, England” plaques at centre. The entire interior scheme of my loaner was bespoke, actually, its private parlour club-like glossy burled walnut accents and caramel leather finishings a perfect match to its mirror-finish dark blue metallic exterior paint. Even the trunk was upgraded from its usual carpeted splendor with a Luggage Compartment Convenience Package featuring a beautifully detailed cargo cover that automatically extends little chromed prongs from the sidewalls for clipping the chrome enhanced leather bar to when fully expanded. All of these additions raised the Ghost’s price to $413,290, but if you have to ask…

As you’d expect with a car that’s priced similarly to a small Vancouver investment condo, some of the Ghost Series II’s standard features are rather unique. For instance, the beautiful Spirit of Ecstasy hood ornament is electrically retractable, while the wheel hubs feature R-R emblems that remain constantly level due to counterbalanced bearing mounts. What’s more, each front door features a full-length Teflon-coated umbrella integrated within, whereas the car’s rear-hinged coach doors in back are electronically regulated.

All doors automatically cinch closed, as does the trunk lid, but this is nothing new for the premium sedan class, although the LED headlamps pose an interesting twist. While they’re adaptive, responding to steering wheel input, they also incorporate new glare-free high beams. These replace the old Ghost’s automatic high-beam system, and instead deflect the lights’ beam so that approaching drivers aren’t blinded, making long stints on the highway at night easier thanks to the brighter light of high-beams the entire way.

While the Ghost includes two of the most comfortable rear seats I’ve ever had the pleasure of lounging in with commodious legroom even in regular wheelbase form, plus the availability of rear powered controls that let you reposition the front seat just ahead to allow for additional legroom, an extended wheelbase model can be had which adds 170 mm (6.7 inches) of rear legroom and a more regal appearance inside and out.

No matter the list of options, the Ghost Series II is easily one of the best-built cars available today. I could ramble on for hours about its seemingly perfect interior quality, the scrupulous attention paid to every detail and, of course, the cabin’s generous helping of chromed metal, with each turn of the head resulting in yet another awe inspiring example of handcraftsmanship, and my words wouldn’t do it justice.

I’d have to say the same for the Ghost’s exterior design, especially since the Series II upgrade made last year. It pulls eyeballs right out of their sockets when you drive by. First and foremost the Ghost isn’t exactly a car you see every day. During a quick stroll that covered a couple of city blocks near my downtown apartment, my partner and I saw two new bright red Ferraris, a silver McLaren, umpteen BMWs and Mercedes’ in M and AMG trims respectively, a two-door Maserati and even a couple of Bentley coupes, but not a single R-R badged car. Buy any Rolls-Royce and you get the only type of luxury that can’t be purchased easily, exclusivity.

New for 2015, more shapely LED headlights differentiate the Series II from the Ghost that came before, while de rigueur daytime running lights were added too, but refreshingly no turn signal repeaters on the mirror caps. Follow the Spirit of Ecstasy’s wings rearward and you’ll see a new tapered “wake” channel gracing the re-sculpted hood, whereas the radiator ornament now leans seven degrees further forward – talk about attention to detail. A revised chrome-rimmed front air intake with a new black mesh insert better cools the front brakes, while the bumpers were also reshaped and the character waft line that runs down each side of the car now leans further forward. Lastly, standard 19-inch wheels have been added, supporting reengineered front and rear dampers, updated steering gear, and new hydraulic rear axle bearings that Rolls-Royce claims ensure better ride quality and improved rear stability, plus reduce vibrations and cabin intrusions even when rolling on the optional 21-inch forged rims I experienced, and I must concur as the updated car feels ultimately comfortable no matter the road surface and thoroughly stable through the corners.

It takes a keen eye to pick out any changes to the Series II from the rear, but this said I’m glad R-R kept the Ghost’s back end design as it was, this being a particularly elegant car from behind, its smallish tail lamps and overall styling almost, dare I say, understated. If you’re looking for more excitement, Rolls-Royce will be only too happy to fulfill your wildest dreams via their Bespoke Commission program. The sky’s the limit, with no less than 44,000 colours beyond the standard five, plus myriad additional features.

Along with everything already said about my test car’s interior, all Ghost Series II models get a new thicker steering wheel, whereas the primary instrument dials and clock fascia feature new polished metal chaplets and floating matte-chrome centres. The dash top is now softer with more supple finishing, while chrome surrounds have been added to the sunvisor lights and natural grain leather-wrapped A and C pillars have become optional. Additionally, Rolls-Royce added standard powered thigh supports to the front seats and redesigned their depth adjustment for greater comfort and support. Meanwhile, the rear perches can be angled slightly towards each other to make conversing easier when set to the “Lounge seat” configuration. Three-way seat heaters are standard all-round, while optional massage function adds to the ultra-luxe experience.

While all the itemized features are wonderful, just listing them off doesn’t remotely represent the majesty of the setting they’re placed in. Like the larger Rolls-Royce Phantom, each Ghost Series II is handcrafted by artisans with years and often decades of experience passed down from a legacy of craftsmanship that dates back 103 years. The end result is a luxury sedan that’s more lavishly attired than most anything else you’ll ever see rolling down main street, yet it’s never overdone unless its owner overdoes it through Rolls-Royce’ aforementioned Bespoke Commission program, and is so enjoyable to pilot through town or on the highway that you can drive it every day.

Of course, you’ll need to prepare yourself for the majority of eyes pointing your way and the occasional thumbs up or even shout out from passersby, in my case a worker on the side of the road smiling and yelling “nice car” as I rolled by. It makes sense of course, as the Ghost Series II is drop dead gorgeous. Truly, with every turn of the wheel you’ll be making a statement of unquestionable personal means and undeniably good taste, while giving those with aspirational dreams a new goal to shoot for. Who knows whom you’ll inspire to greatness just by driving by?
©(Copyright Canadian Auto Press)
Car Shopping Tools