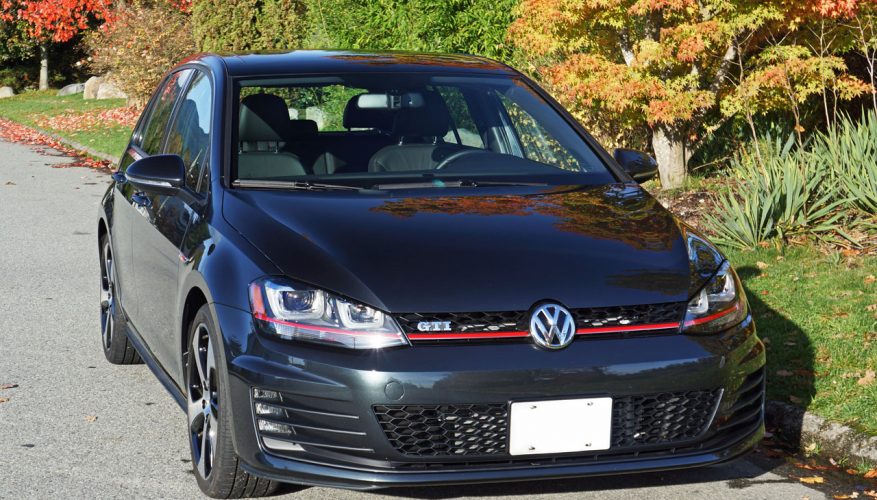 By: Trevor Hofmann
If you’re a hot hatch fan, Volkswagen’s Golf GTI likely owns a bit of your heart. You may have sidestepped to a different brand that’s wooed you with more power or fancier features, but respect must be paid to the pocket rocket that started them all.

I won’t bore you with GTI history as more than enough has been said about every generation that’s come along over the model’s 39-year tenure. Suffice to say the car is now legend.

With the totally redesigned seventh-generation 2015 Golf GTI, Volkswagen hasn’t deviated one iota from the classic shape, which should be a relief to traditionalists although none would have bet on Wolfsburg changing it up too much. The car’s comfortable upright driving position, roomy interior and stubby good looks have won admirers for almost four decades, so steady progressive evolution it is. This said I think most will be pleased with what VW has done.

First off it’s longer, wider, lower and lighter than the GTI that came before, a nice combination that aids livability as much as drivability. Detailing around the car is truly attractive, especially the trademark red pin line that spans its narrow slit of a grille before continuing through the complex headlight clusters, a nice match to the bright red brake calipers at each wheel, dagger-shaped GTI emblem on each front fender, and bright red lettering on the rear hatch. VW has continued pulling pages from Ferrari’s Miami Vice-era Testarossa and countless flat-nosed Porsche 911s of the same ’80s generation by adding even larger cheese slicer side strakes to the front corners, mimicking brake vents while now slashing rearward across the optional LED fog lamps that came with my Autobahn-trimmed tester, a sporty look that bookends the honeycomb-filled lower grille opening nicely.

The rest of the body shell is mostly 2015 Golf, its set of angular taillights an especially attractive carryover, while a more aggressive rooftop spoiler looms overhead and racier diffuser-infused bumper sits below, replete with twin chromed tailpipes. The Autobahn model’s scythe-shaped five-spoke Austin rims grew on me after a week’s drive, being much more attractive than the battle axe rims from years ago, but I’m wondering how their large flat bases will fare against the brutality of high inner city curbs over time.

The 225/40R18 all-season rubber that wraps around them certainly sticks to the road. VW offers even stickier summer tires on up-level Performance trim, that model also getting a 220 horsepower version of the brand’s 2.0 TSI dynamo, along with Dynamic Chassis Control, a locking front differential, the same red brake calipers with a “GTI” logo etched into each, and more for just $2,295 over the price of the Autobahn model I drove.

Autobahn trim meant the above items were nixed from my tester’s menu, but the aforementioned wheels and LED fogs, plus automatic adaptive HID headlamps with auto high-beam function, rain-sensing wipers, proximity-sensing keyless access with pushbutton ignition, an auto-dimming rearview mirror, a rearview camera, 400-watt Fender audio upgrade with eight speakers and a sub, powered recline for the front seats, and a tilt and slide powered panoramic glass sunroof were added to the base model’s standard kit.

My loaner also featured the regular GTI’s 210 horsepower 2.0-litre four-cylinder, a worthy substitute for sure. The engine, up 10 horsepower from last year, uses direct injection and turbocharging to dole out 258 lb-ft of soul stirring torque from as low as 1,600 rpm, resulting in intense acceleration whether bolting off the line or whizzing past slower traffic for those “do I have enough space/time/power to make it” moments. Believe me, you do.

That’s when you’ll appreciate the GTI’s stiffer more stable suspension tuning. The undercarriage remains fully independent, as it’s been for a very long time, the front setup incorporating struts and the rear a multi-link system, while thick stabilizer bars keep both ends level.

On the road, the engine sounds a lot more exciting than the regular Golf mill, VW somehow exorcising the loose tappet diesel sound from the base model’s direct injection system, adding to the car’s overall sportiness. Press down on the throttle and that throaty song combines with serious go power, the GTI once again delivering stronger performance than its output numbers suggest. The six-speed DSG autobox proved as brilliantly as ever, the paddles precise and reaction instantaneous, while VW’s Driver Profile Selection, with normal, sport, and individual modes, allows exactly the level of responsiveness your mood dictates. I had it set to sport mode more often than not, which made a noticeable difference in performance levels and driving feel. As readily quick as the GTI is, take comfort that braking power is enormous and fade from repeated application almost nonexistent.

While the GTI is as much a driver’s car as it’s ever been, the latest version also provides a more refined ride. Some might find this newfound comfort perplexing, like VW has somehow messed with the recipe and gone all soft on us, but that’s not the case at all. First of all the new model is hardly soft, and it handles just as well or possibly a bit better than the last version I drove, the lack of feedback from its electric speed-sensitive power steering aside. Purely from a standpoint of grip, mind you, it’s superb, while it’s simultaneously more pleasurable during everyday traffic where you’ll likely spend much more time day in and day out.

These are the times you’ll appreciate its larger dimensions. It doesn’t look bigger from the outside, its low stance, increased length and width and some of the new design details making the latest GTI appear sportier than the old one, but its styling is a ruse designed to lure in compact tuner buyers before trapping them within a comfortable, premium experience. Let’s face it, while Volkswagen is always trying to appeal to a youthful demographic just like every other brand, most GTI fans aren’t getting any younger. As much as we might enjoy the odd breathtaking moment in a Focus ST, we don’t want to have to work too hard each and every moment.

To that end the GTI continues forward with its pampering, premium-level persona. The dash top is made from soft-touch synthetic, as are the front door uppers, although unlike the old model the rear door uppers are now hard plastic. I can live with this as I’ll never ride back there anyway, but just like previous drives in the new Golf I was a bit put off by the cheap feeling hollowed-out steering column stalks as well as some of the less appealing centre stack switchgear. Likewise fabric only wraps down the A-pillar now, not the other two, VW AG wordlessly telling GTI buyers to upgrade to an Audi A3 if they want such niceties.

Still, it’s not like the new model is devoid of interior improvements, VW even covering the inside of the door bins in a nice grey carpet-like material, no doubt improving sound absorption while keeping bottles from clunking around during hard charging. More so, the infotainment system is a big step up, now with a larger higher resolution full-colour display that loads up quicker at startup and is filled with a much more appealing interface.

The optional Fender audio system delivers good sound quality, although I must admit to liking the old Dynaudio system better. The Fender offers richer, deeper bass tones than the previous Dynaudio, although that system didn’t include a sub, unlike the identically specified eight-speaker, 400-watt, 10-channel Dynaudio upgrade currently offered to European GTI buyers. Still the Fender lacks in overall fidelity, especially when playing classical, jazz, soul, alt pop like Coldplay or some of the folksy alt stuff that’s currently popular. The final verdict: Motorhead rips but Radiohead not so much, although the Talking Heads are good fun either way. No matter, VW’s come a long way from the Blaupunkt days. That’s what we had in dad’s ’76 Scirocco, and while the Bee Gees Jive Talkin’, Donna Summer’s I Feel Love, and Jim Croce’s I’ve Got a Name sounded much better in that car than on the AM box in my mom’s ’69 Pontiac Parisienne Coupe, even today’s cheapest subcompacts offer better sound quality. My point? Nothing much to complain about with the Fender system.

There’s really nothing much to complain about with the entire car. I’ve grumbled a little because that’s what I’m paid to do, but in reality the newest Golf GTI delivers one of the best interiors in its class, all wrapped up in a package that’s edgier than a regular Golf, but not so much that people point fingers and stare at the old guy driving by in his son’s car. It’s maturely understated, allowing the kids to tune it to their hearts’ content as well as those of us who were growing up when the original GTI hit the road to still enjoy driving a brilliant performance car without looking like we’re going through midlife crisis.

A variable-height cargo floor is also standard, reducing luggage space to 490 litres (17.4 cubic feet) when in place or when removed opening up 670 litres (23.7 cubic feet) of capacity, whereas a total of 1,520 litres (53.7 cubic feet) becomes available after folding the 60/40 split-folding rear seats flat. Unlike most in the class, Volkswagen also includes a pass-through behind the centre armrest that allows stowage of longer items like skis while two rear passengers enjoy the comfort of the outboard seats.

Moving up to the Autobahn edition adds $4,000 to the price, while my tester also included the automatic DSG gearbox for an additional $1,400 and four side doors adding $900 more. VW decided against the plaid seats for this tester, instead checking off the $1,095 Leather Package on the options list, which upped the luxury quotient to include black Vienna hides with red stitching to match the red stitched steering wheel, as well as 12-way power for the driver. A $695 Technology Package added navigation and forward collision warning, which when combined with everything else pushed the price of my loaner to $36,085 before adding freight.

While that price is high as far as compact hatchbacks go, you really need to compare the Golf GTI to premium equivalents as its quality, performance and prestige surpass some that wear luxury badges. On this note there are a handful of direct rivals that pack more performance with similar levels of refinement for less, but none that offers the legend that goes with GTI.

Yes, the 2015 Volkswagen Golf GTI is one class act that just got classier, not to mention better in every way.
©(Copyright Canadian Auto Press)
Car Shopping Tools