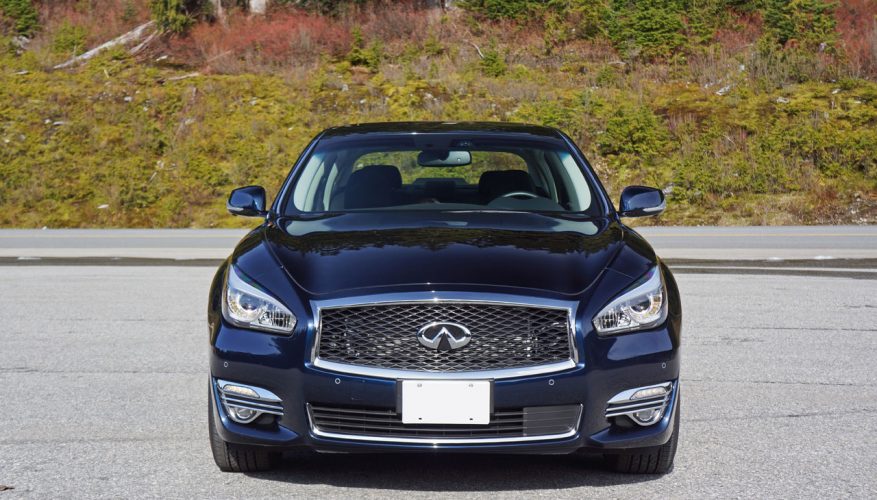 By: Trevor Hofmann
In the automotive sector, attaching an “L” to a luxury sedan’s backside normally designates a long-wheelbase version, and fortunately in this particular model naming process Infiniti isn’t at all confusing. The new Q70L 5.6 AWD is a longer version of the mid-size Q70 four-door, the 150-mm (5.9-inch) stretch not only making the rear quarters more spacious but also adding stateliness to the car’s overall design.

The longer model’s grandeur is appropriate for its role as a flagship luxury car, as is its liberal use of chrome. A thick rim of brightwork surrounding the big double-arch black mesh grille initially catches the eye, while another strip bends around the bottom portion of the lower grille whereas significantly more chrome artfully enhances the fog lamps, albeit these details are identical to the regular wheelbase Q70. Likewise for the gorgeous LED headlamps featuring LED “eyebrows” overtop what looks like a spiral of LEDs circling the main bulbs. The chrome window surrounds and door handles follow the lead of the shorter model too, although the chrome body moulding running across each door is unique to the Q70L. Bright metal finishes off the rear end design too, including a thick strip of chrome applique above the license plate and thinner strand just below, both duplicating the smaller model’s trim garnish and looking especially upscale against my tester’s rich Hermosa Blue paintwork.

On that note I’d like to see a bit more visual differentiation between the two models. Infiniti didn’t even go so far as to change up the wheels from the top-line Q70 I tested earlier this year, which is one of the easiest ways for manufacturers to add unique style to an up-level model. The stock 20-inch split Y-shaped five-spoke alloys are plenty attractive, but some chrome detailing would make them stand out more and simultaneously help to separate this flagship model from the regular wheelbase Q70. In the end, the Q70L is a big luxury car with a sporty personality.

This brings up an important point: Is the new Q70L supposed to fill the position of de facto full-sizer that has been a void in Infiniti’s lineup since it axed the Q45 way back in 2006? That long gone model was an accepted player in the premium F-segment, measuring 5,101 mm (200.8 inches) from bow to stern in its final 2005 through 2006 iteration, which was a number that equaled its mostly German peers in length and mass, but despite the new Q70L actually adding inches to the old Q45, now spanning 5,131 mm (202.0 inches) from end to end and even gaining one millimetre of width for 1,845 mm (72.6 inches), the Europeans have always been wider, which makes a big difference in overall interior volume. While the new Q70L is in fact slightly longer than the latest Mercedes-Benz S-Class that’s already longer than the current 7 Series, the S-Class has 408 litres (14.4 cubic feet) more interior volume at 3,539 litres (125.0 cubic feet) compared to 3,132 litres (110.6 cubic feet). This is partially due to the M-B’s greater width, the S-Class measuring 1,899 mm (74.8 in) side-to-side, which is 54 mm (2.1 inches) wider than the Q70L, and the 7 Series is even wider than the S-Class. So therefore the Q70L doesn’t quite measure up to the full-size premium sedan status quo, but creating a car that directly competes in the F-segment may not have been Infiniti’s intention anyway.

For starters, the Infiniti Q70L is priced more like the E-Class and 5 Series, with a base window sticker of $68,400 plus $1,995 for freight and pre-delivery prep. To be clear, you can get into an E for as little as $59,500 and a 5 for just $56,900, but these regular wheelbase models compete more directly with the similarly sized Q70 that starts at an identical price to the BMW, albeit with a larger more powerful standard engine and more standard features. Infiniti follows this value for money theme with the longer Q70L too, upping the standard engine to its 5.6-litre V8 and only offering the car in one fully-loaded trim level. Rear legroom aside, this puts it head-to-head with the equivalent $76,300 E550 4Matic and $76,600 550i xDrive, before these two start adding options in order to match the standard kit included in the Q70L. Again, the Infiniti value proposition is compelling.

Of course, even a long list of features hardly tells the entire story. For one, the Q70L’s interior is at least as impressive as the regular Q70 if not a bit more. The leather covered primary instrument binnacle with exposed contrast stitching is a nice touch, as are the padded leather knee protectors at each side of the lower console, also stitched attractively. Most of the surfaces are soft to the touch while extra padding is added to the door inserts and of course along the armrest, these covered in leather as well. The Q70L’s suede-like headliner and wrapped roof pillars were especially rich, whereas Infiniti’s choice of white ash silver-powdered hardwood is particularly attractive and purposely Japanese-sourced, celebrating the car’s heritage, its darker edges reminding me of the sunburst effect on a few of the guitars I’ve owned over the years. As with all Infinitis the analog clock at dash central is a key design highlight, a feature that once set models like the old Q45 apart from its peers, before others caught on and provided attractive timepieces of their own.

Features expected in a car selling in the Q70L’s category are all present, the long list itemized a moment ago making this crystal clear, but little thoughtful items like the felt-lined smartphone holder on the centre console make living with the car easier. Additionally the Q70L’s perforated leather upholstery was stitched together in a very appealing wavy quilted pattern, while the front seats’ multiple adjustments made for good comfort and support in all the right areas, although the headrests aren’t powered like some in the full-size class.

As you might expect with more length than an S-Class, the Q70L’s rear legroom is monstrous, or maybe the term gigantic is more suitable being that giants wouldn’t have any trouble fitting in. The heatable cushion controls can be found by folding down the centre armrest, a good idea unless the centre position is occupied.

That centre armrest hides a pass-through from the trunk, incidentally, which helps transport longer items such as skis that wouldn’t otherwise fit into its 422-litre (14.9 cubic-foot) trunk. While offering reasonably good cargo volume for the mid-size segment, the Q70L’s comparative narrowness to the S-Class and 7 Series result in significantly less space. Also, the rear seatbacks don’t fold forward, which might pose a problem for some but is par for the course in the full-size class.

Getting up the mountain certainly won’t be an issue no matter the weather, Infiniti equipping the Q70L with its very capable Attesa ET-S all-wheel drive system and a Drive Mode Selector that lets you swap between Standard, Sport, Snow or Eco modes and then controls throttle response plus shift points to make the most of traction in any situation, while substantive 245/40R20 Bridgestone Potenzas make sure you’ve got plenty of grip. Of course, you’d want to swap those out for a set of winters for maximum traction in the snow, but the stock rubber served me well during dry weather testing that included a particularly quick run up a circuitous mountainside road that terminates at a popular ski resort overlooking my city. The road is paved smoothly for the most part, but its selection of long high-speed curves and ultra-tight switchbacks, with everything else thrown in between, makes for a telltale proving ground. Suffice to say the Q70L can hold its head high, tracking steadily while trees blurred past the side windows and then when taking to the hairpins feeling more like the regular wheelbase Q70 and therefore lighter and sportier than many of its full-size peers, much thanks to standard active trace control that automatically engages the inner or outer brakes to optimize the car’s line through corners. When called upon the Q70L’s four-piston front and two-piston rear calipers clamping down on a large set of ventilated rotors were more than adequate to tame aggressive maneuvers, even keeping their cool after repeated stomps during the downhill charge.

Strong brakes are essential when dealing with a 1,978-kilo (4,352-lb) car that can ramp up speed as quickly as the Q70L, its 32-valve, DOHC, 5.6-litre V8 with microfinished camshafts, Variable Valve Event and Lift (VVEL) and continuously variable valve timing capable of 416 horsepower at full song, plus 414 lb-ft of torque at 4,400 rpm. The engine’s growl under max throttle seems almost inappropriate for such a resplendent luxury sedan, although I welcomed the stimulating sound just the same, and it was all made even more entertaining while downshifting. The Q70L utilizes a sophisticated electronically controlled seven-speed automatic transmission with driver Adaptive Shift Control (ASC), which basically means that a learning algorithm senses your current driving style and immediately adapts to it, which reduces the need for paddles that aren’t included with the Q70L anyway. You can row through the gears manually via the shift lever if you want, although the transmission’s Downshift Rev Matching (DRM) capability works either way as long as Sport mode is selected.

I’ll make a wager that most Q70L owners won’t be pushing the envelope often, but rest assured its highway ride is as comfortable as the car is stable. This is where I enjoyed the advanced adaptive cruise control system, choosing a safe distance from the car ahead, setting the speed and then just letting the car do the rest. If someone slots in between the Q70L slows slightly to get back to its safe following distance, and then when space opens up it automatically resumes the preset speed.

Driven like this the Q70L is rated at 10.2 L/100km on the highway according to the new five-cycle EnerGuide process, whereas its city rating is 15.0 L/100km. That’s about what you can expect from any V8-powered luxury sedan, although it should be noted the big Infiniti doesn’t include some of the environmentally friendly features of its German rivals such as regenerative braking or automatic engine start-stop to reduce emissions while idling. The Q70L isn’t without its green graces, mind you, the entire car a remarkably slippery shape augmented by zero-lift front aerodynamics for an impressively low 2.7 coefficient of drag, which of course aids interior quietness.

While the Q70L may not be the true full-size flagship missing from Infiniti’s luxury sedan portfolio, it offers a credible alternative to those wanting more rear seat roominess yet not requiring all the bulk of its competitors. With almost all the luxury along with a solid dose of performance to back up its sportier styling, the Q70L delivers good value in the large luxury sedan segment.
©(Copyright Canadian Auto Press)
Car Shopping Tools