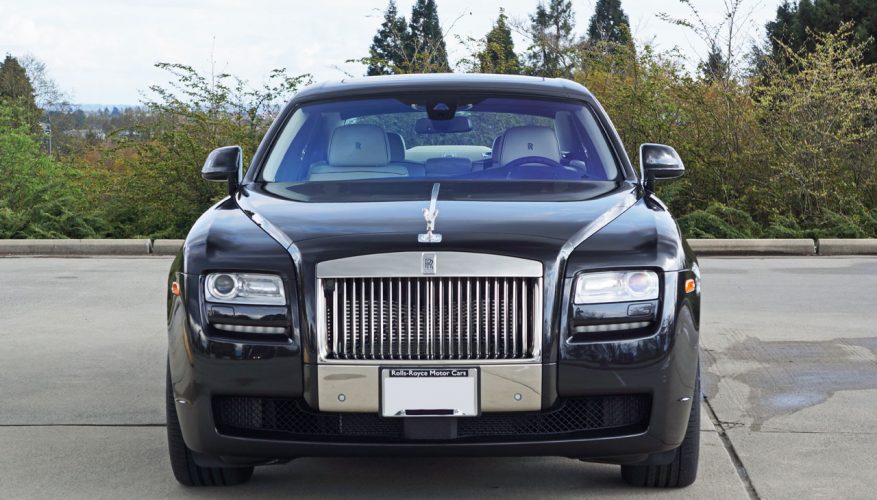 By: Trevor Hofmann
When the Ghost arrived on the scene in 2009 it became the automotive luxury brand of luxury brand’s first attempt to go after entry-level buyers. Of course, Rolls-Royce’ concept of entry-level might be a bit different than yours or mine. They run in a crowd that would consider an Omega or Rolex a work watch, preferring their Audemars Piguet, Patek Philippe and A. Lange & Söhne Grand Complication tourbillons for dinner engagements and society parties (ok, you could buy 10 Ghosts for the price of that last watch, but you get my point). Wearing an MK or Guess watch? Just as likely as nabbing a bunch of 70-percent off deals at H&M before going for burgers and suds at TGIFs.

I’m jesting of course. People are people and even those who live in Beverly Hills like to slum it in Hollywood some of the time, but there’s a continental divide between those who can purchase a luxury car that costs more than the entry price of a Vancouver or Toronto condominium and those that live in those shoebox-sized condos.

Rolls-Royce sells to the people who build those condos. No, not the construction workers, although some of them get paid pretty well, but the folks who own the property development companies, those that fund the people who own the property development companies, and so on. We aren’t even talking about the one-percenters here, but rather the world’s point-one percenters.

That’s a pretty tiny demographic, which ironically means that Rolls-Royce isn’t anywhere near as rich as Toyota or Hyundai, let alone BMW, the automaker that owns it. Throughout 2014 the British brand sold a mere 4,063 units globally, which was the best year it’s ever had. They can thank the Ghost for that. Under BMW ownership Rolls-Royce sales have grown year by year, but they almost tripled after the Ghost was introduced in 2010 and have been climbing steadily ever since. But don’t worry, because surpassing 4,000 sales won’t tarnish the luxury brand’s exclusivity one iota. They’re still selling at a bit more than half the rate of Ferrari, a brand that doesn’t deliver anywhere near as many cars as Bentley, Rolls’ arch-nemesis.

There aren’t many rivals vying for buyers in the $300k-plus bracket (yes, that’s approximately where the Ghost starts out in Canada). Even Bentley’s Flying Spur can be had $50k cheaper. To be exact, Ghosts currently start at $329,808 with prices increasing to $367,310, again not including all options. Sure, you can add extras onto the Spur, but you can do that with a Ghost too, and then some. My tester was a V-Specification model, first made available between January and June 2014, but Rolls has held onto this example for testing purposes. Lucky me.

No matter the trim level, the Ghost Series II is one of the best-built cars the world has to offer. I could go on and on speaking about its impeccably made interior, the fine attention to detail paid to every surface and, of course, the car’s almost complete lack of plastic, the handcrafted leather not only covering every inch of each door panel that isn’t enhanced with chromed metal, beautifully finished hardwood, or specific to the vehicle I drove, glossy piano black lacquer over hardwood, but even wrapping that leather right down into the door jams. Extravagant? Absolutely. Everywhere you turn it’s another breathtaking example of craftsmanship, and while the Ghost doesn’t have many more features than say, a top-line BMW 7 Series, everything is finished to a much higher standard.

The same can be said for the Ghost’s exterior design. It pulls eyeballs right out of their sockets when you drive by; a Rolls-Royce not exactly a sight you see every day. Its grille is classically bold, a façade many have attempted to duplicate, but to no avail. While totally modernized, the Ghost wears its 103 years of heritage well. It’s instantly recognizable as the world’s most luxurious automotive brand yet goes about it in an almost understated way, especially from the rear where its stately taillights are refreshingly small compared to the rest of the car’s sizable albeit tasteful proportions.

If you want more flash, Rolls-Royce will be only too happy to facilitate anything you can dream up through their Bespoke Commission program. The sky’s the limit. Just from the perspective of body colours, R-R offers 44,000 options over and above the five standard hues. I’ve seen gorgeous one-offs over the years, but then again I’ve also witnessed some garish examples of wealth run wild, a bright yellow Phantom Drophead Coupe parked in front of Quail Lodge while attending the Pebble Beach Concours (full disclosure: I was there as a guest of Bentley) that made the supersized drop-top look no more exclusive than a New York taxicab, so I was glad that the car loaned to me by Rolls-Royce was finished in a particularly elegant dark metallic grey, nearing black.

Its cream and black interior was also the epitome of cultured taste. Along with all of the awe-inspiring finishings that I alluded to a moment ago, including chromed detailing just about everywhere I looked, the list of Ghost standard features and options doesn’t appear all that different than what you’d find offered in the aforementioned BMW 7 or any other full-size premium sedan, also including proximity-sensing access with pushbutton ignition, an electronic parking brake, power-cinching doors, a leather-wrapped power tilt and telescopic multifunction steering wheel, head-up display, automatic high-beams, front and rear memory seats, front and rear heated and ventilated cushions, four-zone automatic climate control with fan settings that Rolls calls “Soft” instead of low, adaptive cruise control, parking sensors and a rearview camera, rear entertainment with dual screens set into the front seatbacks and TV capability, picnic tables just below, lane-departure warning, a night-vision camera, or myriad connectivity features like on-board Wi-Fi for email, file sharing, telephony and video-conferencing, or one-touch voice-recognition for calling up the navigation, phone and audio commands, etcetera, albeit the latter items get displayed on a particularly attractive and wide 10.25-inch high-definition screen actuated via an impressive Spirit of Ecstasy rotary controller featuring a touchpad crown with pull and pinch capability.

Exclusive to my tester were stunning 21-inch part-polished wheels, piano black trim on the dashboard and the door panels, massaging seats covered in unique silver leather with contrasting black stitching (although they looked like cream to me), a panoramic sunroof, the V-Specification motif engraved into the treadplates and embroidered on the rear armrest, hand-applied steel inlays, a front multimedia screen lid, a 360-degree camera, plus a unique clock with a black crown surrounding its face.

A few items from the overall features list that truly stood out as being mostly unique to Rolls-Royce included wheel hub emblems that remain perfectly level to the road thanks to counterbalanced bearings, the ability to raise and then stow away the Spirit of Ecstasy ornament, rear “suicide” doors, and that umbrella fitted within the driver’s door never gets old.

The gearbox is ZF’s seamless eight-speed automatic, a perfect match to the 6.6-litre twin-turbocharged V12 under the hood. The stock Ghost engine makes 562 horsepower and 575 lb-ft of torque for acceleration that’s beyond spirited, standstill to 100km/h taking less than five seconds. My tester was equipped with even more capability, its horsepower bumped to 592 thanks to its V-Specification trim. The car’s performance is not only invigorating, but outright shocking considering its size and heft – it weighs almost 2,500 kilos (more than 5,000 lbs) after all. Likewise its handling prowess borders on the bizarre! A car this large and lavishly outfitted shouldn’t be able to corner and brake as deftly as the Ghost, but it does, much thanks to a well-tuned active air suspension.

When not carving up the mountainside, the Ghost might be the best possible place to endure the morning commute. Whether enjoying the car from the driver’s seat or from its commodious rear quarters, which feature two of the most comfortable seats I’ve had the pleasure of relaxing in even in regular wheelbase guise (an extended wheelbase model that adds 170 mm/6.7 inches of rear legroom is available), complemented by powered controls that let you reposition the front seat just ahead to allow for additional legroom, the sound quality of the stock 16-speaker audio system is superb. Those who know me might think the stereo would be my favourite feature, being such an audiophile, but no, the soft as a puppy’s fur lambs wool floor mats totally did me in. Nobody does floor mats like Sir Charles Rolls and Sir Henry Royce, or at least the Goodwood, West Sussex team that lives up to the legendary R-R nameplate.

The same attributes that cause wristwatches made by the watchmakers noted above to be worth tens of thousands at the low end and hundreds of thousands, and sometimes even millions at the high end make a Rolls-Royce more valuable than a similarly sized car replete with the same list of features. Each Ghost is handcrafted by artisans with years and sometimes decades of experience passed down from a legacy of craftsmanship that reaches back more than one hundred years. The Ghost shares its paint, wood and leather workshops with the larger and even more upscale Phantom, but has its own dedicated production line at Rolls-Royce’ Goodwood assembly facility.

This results in a car that’s more opulent than almost anything else on the road, yet its not overdone, hardly garish, astonishingly capable, and something you could drive everyday if your personal fortune allows. Impressed? How couldn’t I be? It’s a Rolls-Royce. Nothing more needs to be said.
©(Copyright Canadian Auto Press)
Car Shopping Tools