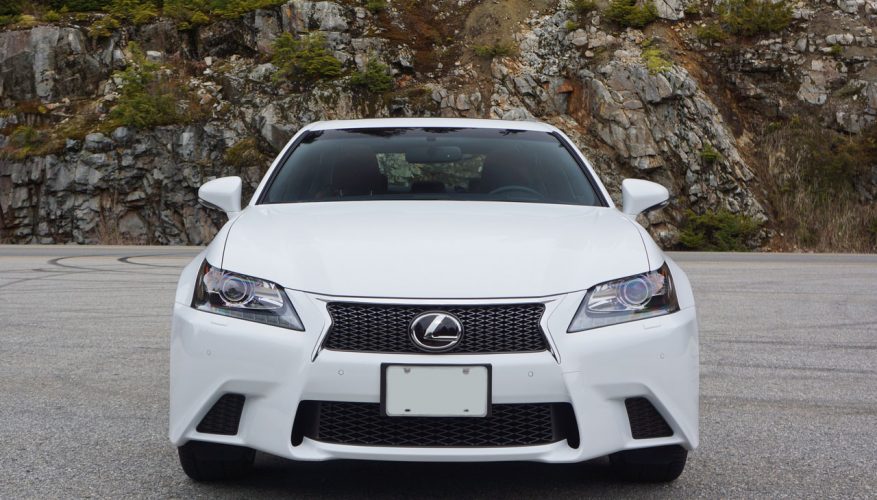 By: Trevor Hofmann
When the GS sedan was redesigned for the 2013 model year it made a dramatic statement, especially for a mid-size Lexus. Sure it is Lexus’ performance-oriented midsize model, so it should look more aggressive than the comfort-biased ES, per se, but its new spindle-shaped grille was even more provocative than the nose on the Japanese premium brand’s exotic LFA supercar.

That spindle grille has now become the brand’s trademark look, showing up on everything from the best-selling RX crossover SUV to the aforementioned ES sedan, making the latter look uncomfortably similar to the pricier GS. This in mind, the comparatively radical IS sport sedan and near over-the-top NX compact crossover are so compelling that, dare I say, the GS almost looks staid and conservative in comparison, even in top-line F Sport trim. Don’t get me wrong as I still think it’s an attractive sport-luxury sedan that’s easily as alluring as most rivals, but I wouldn’t put it past Lexus to go even edgier when the GS gets updated next, especially considering that sales aren’t exactly booming.

I’ll touch on this point in a moment, but before I do it’s a good idea to look at the segment overall to see what this car is up against. The GS fits into the premium midsize E-segment that puts it in contest with the Audi A6, BMW 5 Series, Cadillac CTS, Infiniti Q70, Jaguar XF, and Mercedes-Benz E-Class, not to mention a couple of others that reach up above their brands’ mainstream status such as the Chrysler 300 and Hyundai Genesis. Here in Canada the GS gets standard all-wheel drive, while Lexus also offers the performance-oriented GS 450h hybrid model with a rear-wheel drive layout.

Despite getting a full redesign in 2013, Lexus gave the 2014 GS 350 some major updates. Most were made to the rear-drive model that we don’t get anymore, mind you, so rather than talk about the fabulously quick-shifting eight-speed automatic pulled from the even more sport-oriented IS F, a discussion that might make performance fans north of the 49th feel more than a bit cheesed off, it’s best to make note of F Sport styling enhancements that certainly made the top-line car look a lot more aggressive. These continue forward into 2015, the six-speed automatic-equipped GS 350 AWD F Sport I’m reviewing here looking much more enticing than the more basic version.

Before I delve into that, you’re probably wondering why Lexus chose to discontinue its sportiest GS here in Canada. While I don’t have official word, it likely came down to numbers like so many things do. With sales only reaching 480 units in 2014 and most Canadians opting for AWD to combat our generally colder climate, the amount of rear-drive GS 350 models that left the showroom floor was no doubt nominal. In the U.S. where buyers snap up the GS at a much higher rate per capita, 22,198 down the road last year alone, the rear-drive model makes much more sense.

Good news is the car’s VVT-i infused 3.5-litre V6 makes ample thrust either way, with 306 horsepower and 277 lb-ft of torque immediately responding to throttle input plus a snarly albeit muted bark when right foot hits the floor that really gets the adrenaline going. The six-speed benefits from an engaging set of paddle shifters and increments should flick by fast enough for all those who haven’t already experienced the lightning quick eight-speed unit.

After a more than pleasant week motoring around town, hitting the highway on occasion and enjoying the various cloverleaves at high speed, my partner and I scaled a local mountain road that quickly made clear that the GS shares little than similar styling and size with the comfort-biased ES. The GS 350 AWD’s high-speed stability is rock solid, capability through long sweeping off-camber corners even and steady, and response when flung into sharp hairpins completely controllable with just enough spin from the rear 235/40R19s to make it interesting. Its electric power steering feels tight yet without a trace of nervousness, with reasonable feedback although it’s not the class leader in this respect. Likewise, braking is effective even after repeated stomps on the centre pedal, something many so-called sports sedans can’t claim.

Of course the car’s four-wheel discs get all the usual active safety equipment for emergency braking too, including ABS, electronic brake-force distribution and emergency brake assist, while Lexus goes a step further with standard Vehicle Dynamics Integrated Management (VDIM) that gets all of the safety equipment working through one “brain”, including the stability control, traction control, hill-start assist, and Smart Stop Technology (SST) that limits power to the engine during braking. Rear side-thorax airbags and knee blockers for both front occupants join the usual assortment of airbags, while tire pressure monitoring and LED brake lights cap off some of the safety highlights.

As you might expect in a car that starts at $57,850 plus $2,045 for freight and pre-delivery prep, the GS 350 AWD is well equipped. Without getting too granular, some of the standouts from the base menu include heated and powered auto-dimming side mirrors with integrated signals and puddle lamps, an auto-dimming rearview mirror, dual-zone automatic climate control with cabin air filtration and rear seat heater ducts, a heatable leather-wrapped multi-function steering wheel with those paddle shifters I mentioned earlier, 12-speaker premium audio with an auxiliary jack, USB input, satellite radio and Bluetooth hands-free phone connectivity with audio streaming, plus Lexus’ exclusive remote touch interface with haptic sensors for controlling the large 12.3-inch LCD infotainment display, which integrates a standard backup camera and navigation.

On that note the remote touch interface is the one Lexus first introduced years ago, featuring a joystick-like controller you actuate with the forefingers rather than the new touchpad version that really improves the user experience while modernizing the overall look. The old controller still works fine and accesses an infotainment system replete with myriad functions, but having already moved on to the new improved RTI and then coming back to the old one is like spending a week with the latest new smartphone and then having it replaced with a palm pilot. OK, it’s not that dramatic, but you get my point. Kudos to Lexus for developing such a great new system, now here’s to incorporating it into the next GS.

The rest of the GS interior is a thing of rare beauty, the car really exuding a sense of occasion that never gets old or stale. Elegantly contemporary forms, textures and colours are impressively put together, the materials quality, fit and finish easily up to premium standards and then some. While the base GS gets woodgrain trim, leather upholstery, 10-way powered front seats with heat and air-conditioned cushions, driver’s side memory, a stylish analog clock with LED illumination, a TFT multi-information display, aluminum scuff plates, LED interior illumination, a powered moonroof, variable intermittent rain-sensing wipers, an electric parking brake, adaptive and automatic bi-Xenon HID headlamps with light control and washers, fog lamps, LED daytime running lights, and LED clearance lamps, the F Sport keeps all the really good stuff and adds yet more.

I didn’t realize this until I started writing the story, but there are actually two different flavours of F Sport within the GS range. Both F Sport Series 1 and Series 2 packages, priced at $62,100 and $66,650 plus freight respectively, include the styling enhancements that are so immediately noticeable on this model, such as its deeper more aggressive grille and even edgier lower valance, subtle but effective rear spoiler, fabulous looking dark grey 19-inch alloys, three-spoke “F Sport” badged steering wheel, unique perforated leather-wrapped shift knob, special F Sport leather upholstery and trim that either comes in black or absolutely stunning Garnet as per my tester, F Sport scuff plates, sportier metallic interior accents, and aluminum sport pedals with rubber inserts, plus both series get the performance improvements including Drive Mode Select with S and S+ modes, four-wheel active steering, Variable Gear Ratio Steering (VGRS), and the front and rear Adaptive Variable Suspension (AVS) with TEMS, but the Series 1 makes do with a shorter list of features including a 16-way power-adjustable driver’s seat with powered lumbar support, a 10-way powered front passenger seat, power-folding mirrors, clearance and backup sensors, blind spot monitoring with rear cross traffic alert, and an easy close trunk. The Series 2 upgrade adds a 17-speaker Mark Levinson audio upgrade that sounds brilliant, dynamic radar cruise control that’s wonderful on a long trip, and a head-up display system that helps keep eyes on the road while checking numerous functions, plus driver monitoring and pre-collision systems. My car’s Ultra White paint is exclusive to the F Sport too, although you can get it in other colours if you want to.

While a performance-bred luxury car the GS is also amply comfortable for five adults and their gear, the trunk’s 404 litres (14.3 cubic feet) of cargo capacity not the largest in its class, but hardly the smallest either.

As long as we’re thinking practically, the GS 350 AWD is reasonably fuel-efficient for a mid-size performance sedan with an EnerGuide five-cycle rating of 12.6 L/100km city, 9.1 highway and 11.0 combined, while pricier premium unleaded is required.

It should also be noted that the GS is a very safe car, having earned top crash test marks from the IIHS resulting in “Good” ratings for all categories. Additionally, Lexus is rated highest in the J.D. Power and Associates 2015 Vehicle Dependability Study, a title it’s now held for four consecutive years, although the GS model didn’t even rate in the top three of its Midsize Premium Car class. This study doesn’t reflect the current generation GS, mind you, but rather rates vehicles after three years of ownership.

I certainly haven’t heard or read any negative experiences from GS owners, although as mentioned they’re a scarce lot. Lexus in general is the go-to brand for reliability so I’m going to guess the purchase of a GS 350 AWD should be a safe bet. I don’t have to guess about its performance, however, or its beautifully built cabin, impressive assortment of top-tier features or the general goodness of the car overall. The GS 350 AWD, especially in F Sport guise, is a superb sport-luxury sedan that delivers as much soul as it does refinement. Get ready to be impressed.
©(Copyright Canadian Auto Press)
Car Shopping Tools