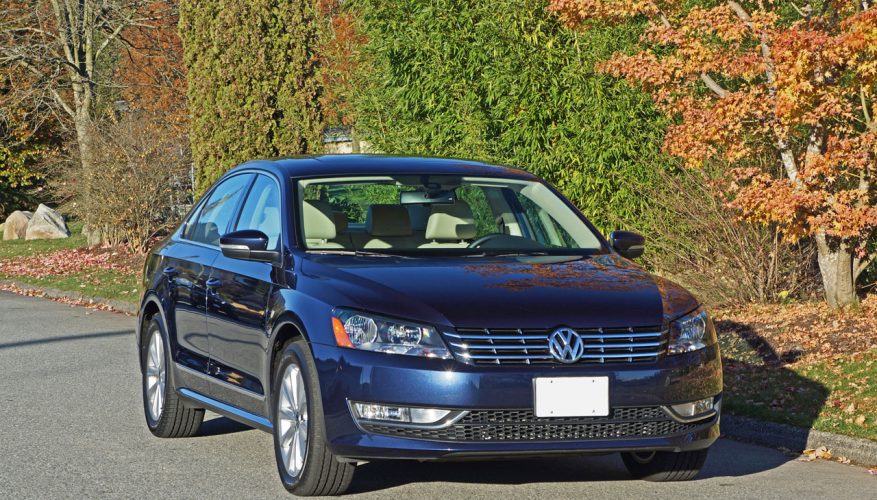 By: Trevor Hofmann
If you tend to “ask the audience” before making a decision and generally follow the crowd when it comes to major purchases the Volkswagen Passat isn’t for you. That’s not to say it doesn’t sell well, but out of 11 mainstream mid-size models available in Canada it ranked eighth on the sales charts last year.

Of course, popularity rarely translates into best, at least not what’s best for every buyer in each automotive segment. For some, styling matters more than features, my Night Blue Metallic on Cornsilk Beige Passat tester looking pretty classy, and never forget that price plays a significant role when it comes to mass-market appeal. Also, some of the brands make their mid-size models available with special de-contented fleet packages that appeal to large companies and government agencies that buy in bulk, these numbers helping the car look more popular in the retail sector than it really is. Not factoring such differentials into the equation and therefore simply laying the list out in order of sales the Ford Fusion is number one with 18,772 units sold in 2014, followed by the Honda Accord with 16,962 deliveries, Toyota Camry with 16,029, Hyundai Sonata with 13,645, Chrysler 200 with 11,655, Nissan Altima with 9,475, Chevrolet Malibu with 8,246, Volkswagen Passat with 7,520, Kia Optima with 7,408, Mazda6 with 3,023, and Subaru Legacy with 2,924 sales for 2014.

To some it might surprise just how well the Passat does, especially considering that it’s always been pricier than its peers. Or has it? That statement would have been true four years ago, but since late 2011 when the entirely new and unique U.S.-built 2012 model was introduced to the North American market it’s been priced similarly to the segment leaders. Just to prove how important pricing is to popularity, the 2011 Passat was nudging up against $28k in its least expensive form whereas the 2012 model came to the Canadian market with a base window sticker of just $23,975, some $3,800 less than the year before, and sales followed with fiscal 2011’s 3,009 Passat deliveries growing to 8,019 in 2012, followed by a slight dip to 7,909 in 2013 and a further drop to 7,520 units last year, the last two years following a negative sales trend across Canada’s mainstream mid-size sedan segment.

To think the Passat’s newfound success is all about pricing wouldn’t be fair either. The updated car, while still including a nice soft synthetic dash top and the same treatment across the door uppers, plus soft door inserts and nicely padded armrests is not quite as premium in execution as its predecessor due to more hard plastic surfaces elsewhere, which align it more closely with other volume sellers within its class, as does its considerably greater size overall.

Another big benefit continues to be a 48-litre (1.7 cubic-foot) larger trunk at 450 litres (15.9 cubic feet), while standard 60/40 split seatbacks allow stowage of longer cargo and an optional pass-through behind the flip-down rear armrest makes cargo options even more flexible.

Extra size is good, but what about weight? Oddly the bigger Passat lost 67 kilos (148 lbs) during its redesign due to the use of lighter materials such as aluminum and high-strength steel, the base car weighing in at just 1,436 kilograms (3,165 lbs) and the current 2015 model having gained just 3 kilos (6.6 lbs) over the last three years of standard add-ons (keep reading) for a new base weight of 1,439 kg (3,172 lbs).

This lighter weight allowed VW to downgrade the base engine to meet its new price point and slightly improve its fuel economy rating, the old 2.0-litre turbocharged four-cylinder with 200 horsepower and 207 lb-ft of torque replaced with a naturally aspirated 2.5-litre five-cylinder featuring 170 horsepower and 177 lb-ft of torque. While acceptable, you don’t grow sales without improving product offerings, and I’ll guarantee the German brand isn’t satisfied with last year’s eighth-place mid-size sedan ranking. Therefore the entry-level 2015 Passat gets VW’s TSI treatment to the tune of 170 horsepower and 187 lb-ft of torque, but more importantly the engine’s much smaller 1.8-litre displacement results in dramatic improvements in fuel economy.

With the base model’s five-speed manual transmission the new turbocharged direct-injection 1.8 TSI is capable of a 9.8 L/100km city and 6.7 highway five-cycle EnerGuide rating, while the six-speed automatic ekes out an even thriftier 9.7 city and 6.6 highway. Considering the Passat’s accommodating size and well-equipped standard trim, such mileage is exceptional. You can do better at the pump with the available Passat TDI Clean Diesel or enjoy more performance from the Passat’s optional 280 horsepower 3.6L FSI V6, but this time around my focus is on this most basic model in its attractively priced, well-equipped top-tier Highline trim.

As an overview, Canadian-spec Passats come in three trims including Trendline, Comfortline and Highline. The base Trendline model is hardly short on features despite its low price. Actually, that price has come down over the last three years to $23,795 plus $1,395 for freight and pre-delivery prep (that freight charge also very low in comparison to rivals, by the way), while content has increased substantially with new standard items like heatable front seats, heatable windshield washer nozzles, illuminated vanity mirrors, a rear centre armrest with storage, seatback map pockets and 16-inch alloy wheels on 215/60R16 all-season tires, the latter a big improvement over the 2012 model’s standard steel wheels with covers. These items were previously part of a Trendline+ package that pumped the so-equipped 2012 Passat’s price up quite a bit, but now they’re just standard fare.

Additional standard kit includes a host of premium-level features such as power windows with automatic one-touch up/down all-round, automatic halogen headlights with a “coming home” feature that temporarily keeps the lights on after you get out of the car, daytime running lights, turn signals integrated into the powered and heatable side mirrors, lane-change turn signals that flash three times with just a single touch, dual-zone automatic climate control, a tilt and telescopic leather-wrapped three-spoke multifunction steering wheel connecting through to a six-speaker AM/FM/CD/MP3 audio system with auxiliary input, VW’s Media Device Interface (MDI) with iPod connectivity (a USB connector is optional, crazy but true, but previously MDI only came with Comfortline and Highline trim so who can complain), doors that lock automatically at 3 km/h, voice activation, a leather-wrapped shift knob and handbrake lever, fabric-wrapped A-pillars, Intelligent Crash Response System (ICRS), and more, not to mention a premium-like comprehensive warranty covering the entire car for four years or 80,000 km, which is a year longer than most competitors. The same goes for roadside assistance, while the powertrain warranty is the usual five years or 100,000 km.

Comfortline trim, which now starts at $26,695 plus freight, $1,280 less than it sold for three years ago despite the improved engine, or $28,095 with the automatic, adds new Carbon Metallic interior trim, new rain-sensing wipers with automatic speed control, as well as eight-way driver and new eight-way passenger powered leatherette “Comfort” seats (the old model only had a six-way powered passenger seat), plus a fore/aft sliding centre armrest, a powered tilt and slide glass sunroof with manual sunshade, an upgraded eight-speaker 6.5-inch touchscreen display audio system with a six-disc CD changer, SD card reader, satellite radio and integrated rearview camera system, as well as rear air vents on the backside of the front centre console, and 17-inch Sonoma alloy wheels on 215/55R17 all-season tires.

Comfortline buyers can upgrade their Passats with a $1,995 Technology package featuring a navigation upgrade for the infotainment system and a powerful 400-watt Fender audio system with a booming subwoofer, plus you can get a $1,995 Sport package that includes two-tone Titan Black and Moonrock leatherette sport seats, Carbon interior décor, aluminum doorsill scuff plates with the Passat logo, paddle shifters, alloy pedals, a rear centre armrest with storage tray, fog lamps, a rear spoiler, and 19-inch Luxor alloys on 235/40R19s.

Due to its winter preparation my top-line tester was shod in 17s on snows when it would have otherwise been clad with 18-inch Bristol alloys on 235/45R18s, while the base manual was swapped out for the optional six-speed automatic with Tiptronic manual shift mode as well as Sport mode, but that was about it for options as nothing else is offered from the factory in Highline trim. This said, at $31,295 for the manual and $32,970 with the automatic it featured some pretty upscale fittings such as ritzy chrome bumper inlays front and back, leather and Dinamica microfiber upholstery, Autumn Nut Burl accents, proximity sensing remote keyless access with pushbutton ignition, driver’s seat and mirror memory, an auto-dimming rearview mirror, an interior lighting package featuring ambient lighting, footwell lighting and rear spot lamps for reading, a universal garage door opener, remote start, the aforementioned infotainment enhancements including navigation plus the Fender stereo, and more.

Volkswagen also provides a impressive array of dealer-added accessories, a short list including 17-inch twinned five-spoke Helix wheels for $1,212; 19-inch twinned five-spoke (but more like 10-spoke) Tornado wheels at $1,855; cool valve stem caps with tiny VW logos for $20; side skirts (primed and ready for paint) for $645; a rear lip spoiler (also primed) for $207; a rear valence with a left exhaust cutout or one with dual exhaust cutouts for $623 (primed); and brushed stainless steel or aluminum doorsills for $265.

While I would have enjoyed the 19-inch rims or some of the aerodynamic add-ons, or for that matter the Comfortline’s Sport Package, or even the regular 18s on my Highline tester, I made due with the 17s, the console-mounted shifter, regular rubberized pedals and supportive enough standard seats, even this Passat feeling sporty compared to most mid-size rivals thanks to a well-sorted fully independent German-engineered suspension with MacPherson struts, coil springs and a stabilizer bar up front, plus a multi-link setup with coil springs and an anti-roll bar in the rear. Its vehicle speed-proportional electromechanical power-assisted rack and pinion steering was light enough for easy maneuverability around town thanks to an 11.1-metre (36.4-foot) curb-to-curb turning circle, yet amply tight for direct response through the curves where the Passat feels ultimately connected to the pavement below. The new 1.8 TSI four-cylinder is wonderfully responsive to throttle input too, quicker feeling than the numbers suggest off the line and amply powerful for highway passing.

Who would have thought such a Teutonic feeling four-door could come out of Chattanooga, Tennessee? VW might have Americanized its most recent Passat to appeal to more would-be North American buyers, the success it’s had in recent years proving it made the right choice, but in the end it’s a well-made mid-size sedan with sporty driving dynamics that keeps its German heritage fully intact. That it’s also wonderfully efficient is just a big bonus that should have you smiling all the way to the bank. Odd that more Canadian buyers haven’t figured this out, but if VW stays the course by continuing to deliver strong value in such a high quality package sales should grow in the years to come.