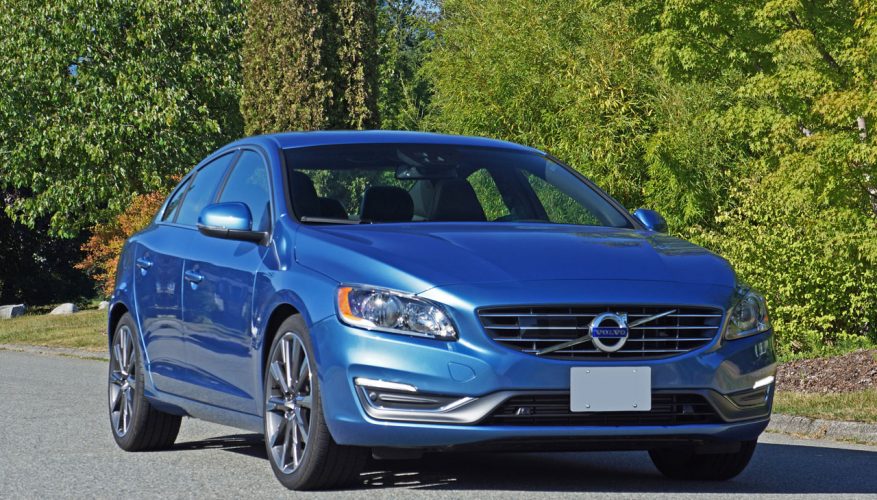 By: Trevor Hofmann
Once upon a time Volvo had a stronghold on the North American premium import market, with its boxy albeit well made and fun to drive substitutes to BMW and Mercedes-Benz targeting the nonconformists in well-to-do society. Now, however, the most competitive rival to the Teutonic twosome also hails from Germany, Audi having risen through the ranks to effectively replace Volvo as the European luxury alternative, while plenty of worthy offerings from Japan, Korea and the U.S. have made competing in our market, not to mention other global markets, ever more challenging.

This competition almost killed Volvo, which was underfunded and left to wither and die under Ford ownership, at least after the blue oval automaker had decided to let go of its Premium Auto Group offerings in order to restructure and rebuild. A good decision for Ford, which now appears to have clairvoyantly forecasted the Great Recession of 2008/2009 that forced General Motors and Chrysler into government assisted life support, but not such a positive result for Volvo that was depleted of resources needed to bring fresh new products to market.

Just the same, the new S60, which was brought out in 2014 as a 2015 model here in North America (it hit the European market a year earlier), is climbing its way back into Canada’s upper-crust sector with respectable sales numbers. Fifteen years ago Volvo’s Canadian division was selling S60s at the rate of 3,500-plus per annum, but these numbers fell to just 541 examples in 2008 and an almost flatlining 145 units in 2009, so its sales of 1,916 S60s in 2014 (a number that also includes the new V60 wagon) should be seen as an impressive recovery. In comparison BMW’s 3 Series surpasses 10,000 units per annum, whereas the M-B C-Class managed just over 7,000 sales last year and Audi’s A4 almost achieved 6,000. Cadillac’s ATS only found 3,714 buyers in 2014, however, and Acura’s new TLX, which replaces both the TSX and TL, made do with just 2,121 deliveries, albeit only after a partial year’s sales, so if Volvo continues building cars as good as the new S60 its well respected name in the industry should allow for continued growth.

This most recent 2015 model year redesign is only a mild but effective refresh of the second-generation S60 that hit the market in 2010. It’s comprised of new body panels from the A-pillars forward including a revised hood, front fenders and fascia, plus a reshaped wider grille incorporating a larger Ironmark logo and bookended by updated headlights. A larger, wider lower front intake gets enhanced with bright detailing as well as horizontally-mounted LED daytime running lights, while the rear design includes reworked taillights and new tailpipes integrated into an updated bumper. The look is immediately more appealing, especially in my test car’s beautiful Power Blue paint, an $800 option although just one of 10 colour and shade choices, eight of which incur the metallic surcharge.

Even within the base T5 Drive-E FWD model there are four trim levels, the $41,350 Premier adding proximity-sensing Keyless Drive access, Volvo’s Personal Car Communicator (PCC), leather upholstery, a three-mode TFT adaptive digital display for the primary instruments, an auto-dimming rearview mirror, a powered tilt and slide glass sunroof, bright side window trim and unique 17-inch Sadia alloy wheels. The $42,150 Premier Plus model ups the ante with power-retractable side mirrors, a rearview camera, a Quick-Fold front passenger seat that enables stowage of long cargo, a Homelink universal garage door opener, a compass and a grocery bag holder in the trunk, whereas $45,350 Platinum trim adds auto-dimming side mirrors, a navigation system, a 12-speaker Harmon/Kardon audio upgrade with a 650-watt amplifier, and soft-white ambient accent lighting.

Additionally, some standalone options include Park Assist Pilot, a $500 extra that will park your S60 for you, plus active HID headlights for another $1,000. If aluminum interior trim is not your thing you can opt for piano black lacquered wood inlays or Urbane wood inlays for $400, while Volvo lets you up the wheel size without opting for the Sport Package, albeit only to 18 inches instead of 19 for an additional $1,000 (although for $200 more it doesn’t make much sense), while the Quick-Fold front passenger seat can be had on its own for just $100.

On top of all these prices is a $1,800 freight and pre-delivery prep fee, which incidentally is up to $500 less than some rivals for another example of value for money exchanged.

Merely discussing standard and optional features doesn’t really do the S60 justice, however, as the way Volvo has incorporated all of these details into and onto its most popular sedan makes it truly stand out from every competitor. In this respect the Scandinavian brand has long been a leader when it comes to good, clean, tastefully understated design, the latest S60 improving on this theme with some of the best materials quality in the segment. One look is all it takes to get my point, but there’s no way to fully appreciate the expense Volvo has undertaken in order to win over new buyers until you take a seat inside and get a feel for yourself. As you might expect the S60 covers most surfaces with rich feeling soft-touch synthetics, with only the lower portion of the dash and inside walls of the lower console made from harder plastics, just like segment competitors. The only touch points that Volvo should immediately address are the inside grips of the door handles that feel a bit substandard, but most everything else is very well executed.

For instance, the primary gauges are exquisitely detailed, the customizable high-resolution TFT graphics beautifully designed and replete with useful functionality, large seven-inch infotainment system clear with attractive graphics and loaded with features, floating centre stack still a gorgeous brand-exclusive design element that’s held up wonderfully since introduced almost a decade ago, the innovative rotating knobs and buttons encapsulated within some of the most elegantly laid out in the industry and easiest to use, leather and aluminum clad shifter stylishly modern, rearward-rising lower console with its roll-top lidded storage bin uniquely useful, and beautifully sculpted leather-clad sport seats as enticing to look at as they’re comfortable and supportive to sit in. Ditto for the rear seats, that offer accommodating shoulder and hip room and acceptable head and leg room, while featuring a handy flip-down centre armrest with dual cupholders and yet more storage, not to mention a useful pass-through to the trunk allowing longer items such as skis to be loaded in while four passengers enjoy greater comfort (and the benefit of seat heaters in my tester) than if the 40-percent section of the 60/40 split seatbacks is lowered.

I should note here that there are four additional S60 models above the T5 Drive-E FWD, starting with the T5 AWD and then moving up through the more powerful T6 model to include the T6 Drive-E FWD, T6 AWD, and T6 R-Design AWD. I’m not going to go into any detail with these models other than to say that the T5 AWD is powered by an older-tech (non direct-injected) 250 horsepower 2.5-litre four-cylinder with 266 lb-ft of torque; that the T6 FWD spins its front wheels via an ultra-advanced supercharged and turbocharged direct-injection 2.0-litre four capable of 302 horsepower and 295 lb-ft of torque; the T6 AWD incorporates a 3.0-litre turbocharged inline-six putting out 300 horsepower and 325 lb-ft of torque; the T6 AWD R-Design AWD employs the same straight-six turbo tuned to produce 325 horsepower and 354 lb-ft of torque, and last but hardly least a new S60 Polestar incorporates a 350 horsepower version of the same engine.

As exciting as some of those S60 alternatives sound, the base T5 E-Drive FWD’s aforementioned 2.0-litre direct-injection turbocharged four-cylinder feels quite quick all on its own thanks to 240 horsepower and 258 lb-ft of torque. This engine goes back to Volvo’s PAG days and therefore is shared with some blue oval models as well as a select few from Lincoln and Volvo’s ex-cousin brand Land Rover. The engine loves to rev but doesn’t really need to as its full load of torque comes on at a very low and tractable 1,500 rpm, this saving fuel if driven with a light right foot. The eight-speed autobox with its start-stop system helps in this respect too, while providing snappy shifts that are also suitably smooth for this luxury car’s refined demeanor.

While the S60 Drive-E FWD’s 9.8 L/100km city, 6.6 highway and 8.4 combined fuel economy rating is a critically important selling point in Canada where we pay more for gas than south of the border, and especially where I live in Vancouver where the price per litre is significantly higher than anywhere else in North America, the way it drives will no doubt win you over. As mentioned it uses torque-vectoring Corner Traction Control to get it quickly through fast-paced curves and dynamic stability control to maintain similar speeds whether in dry or slippery conditions, so when Sport mode is engaged it’s superb fun no matter your route.

Even driving home from the dealer Volvo uses to prep the test cars I had a smile on my face, the engine’s performance surprising, transmission’s adaptive shift control and optional paddles engaging, and brilliantly set up sport suspension ultra-agile when slotting in and out of traffic. Then again when I hit a few favourite roads that circulate up and around Vancouver’s North Shore mountains the S60 really came alive, reminding me why the Swedish brand has managed to hold onto its small group of fiercely loyal fans despite its many challenges. The 1,658-kilo (3,655-lb) T5 E-Drive model’s braking is at least as capable as its handling prowess, making for a grin inducing package that easily matches the majority of its immediate peers. All the while the suspension doesn’t interfere with passenger comfort one iota, its ride quality excellent and isolation from road perfections superb.

Where the S60 shrinks from most competitors is inside its 339-litre (12.0 cubic-foot) trunk, which is rather small for the class and only made up for by the car’s stylish profile. I can live with this, and of course if you can’t the new V60 wagon allows SUV levels of luggage space in the same basic package, while Volvo’s XC60 compact CUV delivers impressive performance for those who would rather have the visibility advantages of a taller ride height. Volvo really does have the compact luxury segment covered, at least until it once again offers an S40 sedan for our market that will more effectively help it compete with some of the premium sector’s new assortment of true compact models. Until then the S60 delivers more car for less money, which isn’t so bad now is it?

In the end, Volvo might not be as big a player as it once was and the S60 likewise not as popular in its segment, but that’s not because it’s any less of a sport-luxury sedan than its German, Japanese or U.S. rivals. In fact, in many ways it’s better and therefore totally deserving of your attention.
©(Copyright Canadian Auto Press)
Car Shopping Tools