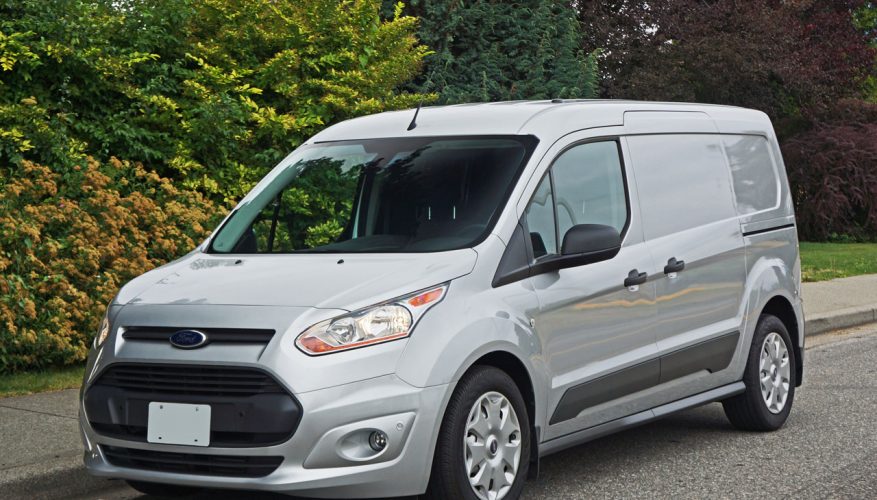 By: Trevor Hofmann
If you’re in the market for a fuel-efficient delivery vehicle or something suitable for hauling around gear dedicated to your small business there’s never been a better time to buy into the compact cargo van category.

We can thank Ford for that. Back in 2009 when the blue oval brand started exporting the Turkish- and Romanian-made van to North America there wasn’t much competition in the segment, but now Nissan has its NV200, Chevrolet is finally back in the market with a rebadged version of the same Nissan called the City Express, and Ram has its new Fiat Doblò-sourced ProMaster City to go along with its Grand Caravan-based Cargo Van.

Completely revamped last year and now built in Almussafes on the outskirts of Valencia, Spain as well as by Ford Otosan, jointly owned by Ford and Koç Holding in Gölcük, near Kocaeli, Turkey, the second-generation Transit Connect remains the one to beat when it comes to style, performance and overall value, so it’s pretty much status quo for the 2015 model.

And don’t underestimate styling when it comes to the commercial sector. Your van represents your business, whether it’s decaled out in company colours and corporate logos or simply suited up in plain white, it’s an extension of your firm’s brand identity, a mobile billboard that speaks volumes about your business’s level of success, ability to stay current with changing times, and environmental responsibility.

To this end the Transit Connect provides a good public image, its new design fresh and bold while its compact size shows that you value fuel friendliness and resultant lower emissions. Behind its new grille design is one of two engines replacing the outgoing 2.0-litre Duratec four-cylinder, starting with Ford’s 2.5-litre Duratec four-cylinder in base trim, and an even more powerful and more fuel-efficient optional 1.6-litre Ecoboost direct-injection turbocharged four-cylinder in upper trims, my tester fitted out with the latter. The technologically advanced engine makes a surprising amount of power for such a small displacement, doling out 178 horsepower at 5,700 rpm and 184 lb-ft of torque at a very tractable 2,500 rpm, which is significantly more than the larger displacement base engine’s 169 horsepower at 6,000 rpm and 171 lb-ft of torque at 4,500 rpm. Still, even the base engine is up 33 horsepower and 43 lb-ft of torque over the old 2.0-litre’s output, while the new six-speed automatic transmission with SelectShift manual mode is light years more efficient and fun to drive than the antiquated four-speed slushbox that kept the old model in the dark ages.

Performance is good, but most fleet managers and small business owners would rather talk about fuel economy. This is where the smaller Ecoboost powerplant commands the most attention thanks to an impressive five-cycle EnerGuide rating of 10.6 L/100km in the city, 7.9 on the highway and 9.4 combined. The larger base engine is still pretty decent, eking out 11.3 city, 8.2 highway and 9.9 combined from the TC’s 60-litre tank, but you’ll need to factor in who’ll be driving your van as the efficiency figures diminish quickly when mated to those with a heavy right foot, especially with the Ecoboost engine.

The Ecoboost saves 17 kilos (37 lbs) in curb weight, which aids fuel efficiency ever so slightly, weighing in at 1,624 kilograms (3,580 lbs) compared to the 2.5-litre van’s 1,641-kg (3 618-lb) mass. While its 12.2-metre (40.0-foot) curb-to-curb turning diameter isn’t exactly small, this the result of front-wheel drive and a wheelbase length of 3,062 millimetres (120.5 inches), the lighter van is also a tiny bit more maneuverable around the tight confines of parking lots and back alleys where loading bays are often kept, and combined with its electric power steering that provides plenty of assist at slow speeds and impressive response when velocities increase, makes it more manageable through higher-speed curves where its independent MacPherson strut front suspension and twist-beam rear setup does a respectable job of holding its lane, the Transit Connect’s front and rear stabilizer bars aiding body lean and therefore road-holding. Of course, you’ll need to slow things down a tad when entering a sharp corner if the Transit Connect is pulling its best-in-class trailering weight of 907 kilos (2,000 lbs), when properly equipped, or fully laden with 739 kilos (1,629 lbs) of maximum payload – it’s GVWR is 2,390 kg (5,269 lbs) incidentally – especially if it’s piled high up into the tall van’s 1,262-mm (49.7-inch) rafters.

That’s the maximum cargo height available in back, the length at the floor measuring 2,217 mm (87.3 inches), length at the belt slightly shorter at 1,958 mm (77.08 inches), length with the front passenger seat folded 2,969 mm (116.9 inches), and width between the rear wheelhouse spanning 1,226 mm (48.2 inches). The load floor height is 601 mm (23.6 inches), which makes for easy loading, while the rear door has an opening height of 1,118 mm (44.0 inches) and opening width of 1,252 mm (49.3 inches) at the floor, ample enough for easy access of large cargo. The rear doors, available with or without windows, can be swung out at 180-degree right angles too, allowing closer access to loading bays, and new for this second-generation Transit Connect is the availability of a minivan-style liftgate with a single-pane rear window if that’s more to your liking. Standard dual sliding side doors brings to memory another minivan innovation that makes the Transit Connect more functional for business, each side-slider available with or without glass, either way opening up to an access width of 838 mm (33.0 inches) and height of 1,223 mm (48.1 inches). If your business requires no slider on the driver’s side you can get the TC with only one on the passenger side, just like cargo vans of yore. Load it up to the brim and you’ll be maximizing 3,698 litres (130.6 cubic feet) of cargo capacity.

The passenger compartment is large and spacious with 1,790 litres (63.2 cubic feet) of volume, but what I like most about the new Transit Connect is the design and layout of the instrument panel and controls, which come pretty close to the impressive usability and quality of the Focus. It didn’t hurt that my tester came in top-line XLT trim and furthermore was kitted out in almost every available option Ford could throw at it, which meant that a full-colour high-resolution multifunction display was set into the attractively laid out primary gauges along with steering wheel controls to operate them, not to mention steering spoke-mounted buttons for Sync hands-free phone connectivity, voice-activation, the audio system and cruise control.

Atop the centre stack, a 6.5-inch MyFord Touch infotainment display added phone features including audible text messaging with compatible phones, plus climate control and entertainment features, not to mention full navigation capability and a rearview camera with guidelines to complement the rear (and front) parking sonar system.

Ford offers an optional auto-dimming rearview mirror too, but being that my rear doors didn’t include the optional rear windows there was an odd-looking nub where a mirror would otherwise be mounted. Just below the infotainment screen sits a complete set of audio controls for the amply good sounding AM/FM/CD/AUX/USB/satellite stereo, and below that easy to use three-dial HVAC switchgear for the A/C-equipped manual climate system, all within easy reach. Power-adjustable side mirrors made optimizing rear visibility easier and being heatable they won’t require scraping on cold winter mornings. Variable-speed windshield wipers were also included, while the list of extras not fitted to my tester’s cabin included a six-way power-adjustable driver’s seat, rain-sensing wipers and remote start.

The standard equipment list is long so I’m not going to even try to detail it out for you, but a shortlist of items not already mentioned includes powered locks with remote keyless entry, a tilt and telescopic steering column, powered front windows with one-touch down on the driver’s side, an AM/FM audio system with an aux jack, a four-way adjustable driver’s seat and four-way passenger seat (the latter with a fold-flat feature allowing stowage of longer cargo), vinyl floor coverings for the passenger compartment and the cargo area, a front dome light, daytime running lamps, integrated spotter mirrors, and a full-size spare. Many of the options already mentioned can also be added to the base XL model, although most of the higher end ones can’t.

There was no shortage of classy looking metallic accents highlighting my XLT’s cabin, especially on the gauge package, steering wheel spokes, centre stack and nicely detailed shift knob, while the door panels received aluminum-like detailing on the pulls and handles. The seat fabric consisted of an attractive geometric pattern in grey and silver over a high-quality black woven material, again more impressive looking than I was expecting in a panel van and a lot more comfortable too thanks to an uprated six-way driver’s seat with much appreciated lumbar adjustability, while between the two was a centre console featuring a 12-volt power plug, spare change holder and twin cupholders just ahead of a nice padded armrest covering a handy storage bin.

Speaking of handy, Ford carried over the Transit Connect’s ultra-useful overhead storage shelf up above the windshield, ideal for stowing stuff you need to access quickly. The driver-side sunvisor gets a ticket strap along with a vanity mirror whereas the passenger-side version just includes the vanity mirror, although more useful to me were large bottle pockets integrated into the lower door panels.

Some of the packages Ford offers with the Transit Connect are really interesting, such as the Crew Chief system powered by Telogis. Fleet managers will love this one, as it provides real-time alerts on a variety of driver and vehicle metrics, featuring reports about driving habits and fuel efficiency plus asset utilization and vehicle maintenance.

When the 2.5-litre four-cylinder is chosen, Ford can also upgrade the engine with a CNG/LPG gaseous engine prep package for conversion to compressed natural gas or liquefied petroleum gas. The package includes hardened intake valves, hardened exhaust valves, and hardened valve seats, although it doesn’t include the CNG/LPG fuel tanks and lines, which are installed by CNG/LPG providers.

On the road, the 1.6-litre Ecoboost fitted to my tester was a lot more spirited than what I experienced in my last test drive, which was a first-generation Transit Connect kitted out in heavier taxi trim no less. The new van gets up and goes quickly and the six-speed automatic shifts smoothly and very quickly, either by its own devices or via a cool thumb toggle on gearshift lever. As mentioned the steering is electric power assist for less drag on the engine and it works more than adequately for the panel van class, while the ride was surprisingly smooth. Even when pushing it a bit too hard the TC’s four-wheel discs with ABS and electronic emergency brake assist slowed everything down with composed confidence, while Ford’s excellent AdvanceTrac with Roll Stability Control kept it within the chosen lane in slippery conditions.

Safety in mind, a tire pressure monitoring system is standard as is Ford’s SecuriLock passive anti-theft system, while the airbag count includes the usual two up front, two for side impact and two curtain-type bags for a total of six.

Also, keep in mind that the Transit Connect can be had as a seven-occupant passenger van with windows all-round that not only works well for shuttle services but would be ideal for large families as it can be upgraded with some truly luxurious features and even Titanium trim, while this model can still be had fully equipped for taxi service.

The old Transit Connect was a well-conceived business tool that certainly won me over when it was introduced six years ago, but this new iteration moves everything up a solid notch. It’s better looking, much more enjoyable to drive, delivers greater efficiency and is miles more refined, while still offering the high level of overall functionality panel van users demand.