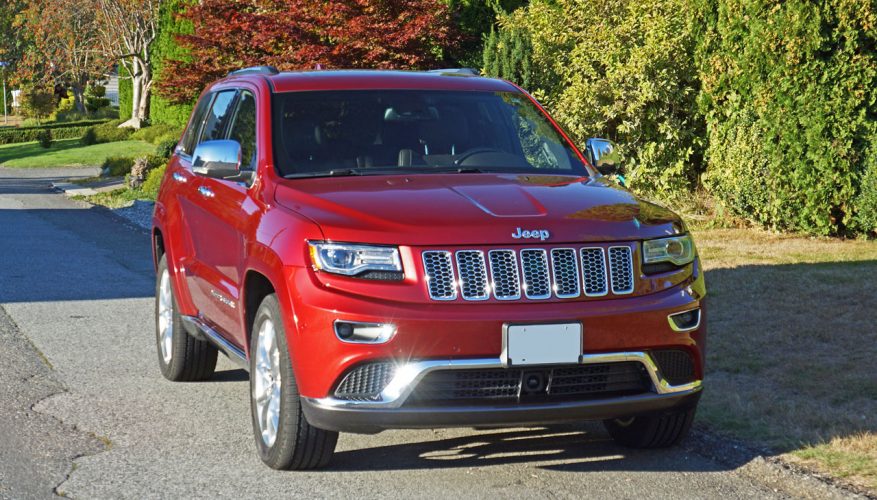 By: Trevor Hofmann
Jeep only just gave its flagship Grand Cherokee model an update last year, so there aren’t many changes to the 2015 model. The intensely fun Grand Cherokee SRT that I tested last year gets a minor five horsepower and five lb-ft of torque bump in output for a staggering 475 ponies and 470 twisties respectively, while the same SRT model as well as the Grand Cherokee Summit I’m testing here get active noise cancellation plus additional noise abatement to the windshield and second-row windows to reduce NVH levels, the latter appreciated by the well-to-do crowd this model attracts.

It’s no secret that the Grand Cherokee is as loved by the worlds wealthy as it is by global adventurers, its go-anywhere capability almost overshadowed by an interior that easily makes it a candidate for premium status. Jeep’s legendary name and the all-round capability that comes with it taking care of the rest. That it looks so very good isn’t just icing on the proverbial cake, however, it’s absolutely critical for sales success these days, which is why we’re seeing so many seemingly miniscule updates from automakers year after year.

The fourth-generation Grand Cherokee’s 2014 refresh included a revised front fascia with a slightly reworked chrome trimmed body-colour grille surround on all but the SRT, which is now black, plus new smaller headlights that are given a unique shape in Overland models and above, these with integrated daytime running lights too while the SRT gets even cooler LEDs. Redesigned projector fog lamps are also included, whereas new wheel designs enhance the model’s profile view, and at the rear new taillights are no longer connected via a centre chrome applique. My appropriately named Summit trimmed tester, top of the line ahead of the SRT, looked especially smart in its Deep Cherry Red Crystal Pearl paintwork and gorgeous 20-inch chromed Y-spoke alloys, every bit the premium ride its price point suggests.

Yes, so equipped the Grand Cherokee isn’t a layman’s SUV, the base Laredo model’s $40,495 entry price quickly rising to $64,745 before tacking on the freight and pre-delivery prep charge of $1,695. Also added to my tester’s tally was $4,995 for the 3.0-litre EcoDiesel V6 that joined the lineup last year, a wonderfully smooth and refined engine that produces up to 240 horsepower and an even more impressive 420 lb-ft of torque, much better performing than the Mercedes-sourced 3.0-litre inline-six in the old CRD model I tested back in 2009, which made 215 horsepower and 376 lb-ft of torque. What’s more, the efficient new diesel delivers the kind of fuel economy expected of a four-cylinder crossover, let alone a fully capable SUV that can leap forward from standstill as quickly as the GC EcoDiesel, whether leaving the stoplight or launching up a rock strewn canyon trail at just the right speed to make it to the top without spinning its tires into ruts or worse, bouncing its belly off of boulders.

Despite a short-lived respite in pump prices that has since seen them pop back up near where they left off late last year, fuel economy remains an important factor in choosing a new car. This, and a lower entry-level price, is why the Grand Cherokee can be had with an efficient 3.6-litre V6 in base and even Summit forms, still very capable with 290 horsepower and 260 lb-ft of torque yet also good for a claimed five-cycle EnerGuide rating of 13.9 L/100km in the city and 9.8 on the highway. Also available is the 5.7-litre Hemi V8 making no less than 360 horsepower and 390 lb-ft of torque while utilizing upwards of 17.3 L/100km city and 11.5 highway, while the EcoDiesel ekes out a much more wallet-friendly 11.2 city and 8.4 highway rating. That’s about 50 percent better than the V8’s fuel economy by the way, so while there’s a significant surcharge for the EcoDiesel it’s bound to pay off if you keep your GC long enough. Just looking at my personal cost of fuel last year, which was quite low at $3,830 compared to previous years that reached upwards of $6,000, it wouldn’t take long to pay off a $5k upgrade that saved me 25 percent, let alone 50.

The direct-injected turbo-diesel oil burner comes from FCA’s own VM Motori Centro division, a clean-diesel that’s enjoying at least as many accolades in Ram’s latest 1500 half-ton truck, causing that model to become the most fuel-efficient full-size pickup ever. It’s a joy to drive no matter the application, making light work of the Grand Cherokee Summit’s 2,247-kilo (4,954-lb) curb weight insomuch that it felt like a nimbler compact crossover around town and when ramping up to highway speeds.

I didn’t have opportunity to take the Summit EcoDiesel off-road, one of my favourite pastimes but such a rare occasion these days. I’ve driven many GC’s off the beaten path and have always come back impressed, so I can just imagine how much better it would be with this torque-infused engine, not to mention my tester’s Quadra-Trac II four-wheel drive system with its low-range gearing, plus its Quadra-Lift Air Suspension system that allows for more ground clearance, the latter also quite the asset on pavement where its ride is excellent, handling enhanced, and aerodynamics improved by a slightly lower ride height that leans into the wind.

On that note the Grand Cherokee’s fabulous new paddle shift-actuated ZF-sourced eight-speed gearbox is about as smooth shifting as automatic’s get, a testament to the continued validity of conventional torque-converted automatics in a day and age that’s seeing CVTs and dual-clutch gearboxes surge into the spotlight, none of which would be suitable for an off-road vehicle, or for that matter an SUV capable of pulling up to 3,265 kilograms (7,198 lbs). That’s a fully stocked camp trailer by the way, or better yet, a Sea Ray 260 Sundancer, which would look mighty fine in tow behind this equally rich SUV, the Grand Cherokee’s trailer sway control making sure your load stays nice and steady. Such talk makes me feel like going on a road trip, the GC EcoDiesel’s 93-litre tank capable of a 1,300-kilometre (808-mile) range, which would allow requisite family pit stops to occur somewhere more enjoyable than dumpy gas stations.

If you haven’t driven a diesel in a while you’re in for a treat. Modern-day clean diesel engines are much quieter and less smelly than they were in the past, the Grand Cherokee Summit benefiting further from the aforementioned active noise cancellation and other NVH reducers, such as acoustic glass, extensive door and window sealing plus sound deadening materials within the sidewalls and doors. To this end the GC has that wonderfully well-constructed ambiance that most German luxury models possess, where the doors shut with a level of solidity most mainstream players can’t replicate, and once ensconced inside all tones are hushed by those sound deadening processes just mentioned, as well as the quality of soft-touch materials used throughout.

Yes, the five-occupant mid-size Jeep is really upscale inside, with a stunning stitched leather dash top, a nice match for the leather armrests and seat bolsters, both of which get attractive contrast stitching as well, while the seat inserts are perforated for three-way ventilation that joins three-way heatable cushions as part of the Summit upgrade. Most every other cabin surface is made from pliable synthetics, giving this 4×4 a more upscale interior treatment than some premium branded products. I especially like the open-pore matte wood trim and extensive use of satin-finish metallic accents on the gloss-wood and leather-wrapped tilt and telescopic multifunction steering wheel, as well as around the vents, surrounding the centre stack, covering much of the lower console and ringing each door speaker, while each A-pillar is wrapped in the same suede-like Alcantara as the roofliner for an over-the-top opulence the private club set will appreciate.

That centre stack is filled with one of the largest infotainment touchscreen displays in the industry at 8.4 inches, which gives full access to a sensational sounding 19-speaker, 825-watt Harmon/Kardon audio system with Bluetooth audio streaming, satellite radio with a year’s subscription and all the expected audio features (my tester including an optional remote CD as well), while the Uconnect system features a voice activation system that actually works.

Those front seats I just mentioned are 12-way power-adjustable up front, for incredible comfort even after a long drive, while driver memory settings are also included. Rear outboard passengers don’t get ventilated seats, but they do benefit from heatable cushions to make sure everyone quickly warms up after a day on the slopes, while all Grand Cherokees benefit from more than enough rear seating room for three medium-sized adults abreast. In the Summit, a large panoramic sunroof makes everyone feel less claustrophobic too, while dual-zone automatic climate control keeps the cabin at the ideal temperature no matter what’s happening outside.

The liftgate is powered too, while opening it up presents a luxurious Berber carpeted mat underscoring a sizable 1,028 litres (36.3 cubic feet) of cargo space behind the 60/40 split-folding rear seatbacks and 1,934 litres (68.3 cubic feet) when they’re lowered flat, more than enough for most families’ weekday and weekend requirements.

Many of the aforementioned active safety features can either make or break the driving experience, especially if there’s too much interference from the digital nannies. For instance, while most of these safety aids worked away in the background without my noticing, except when the cross-traffic alert warned me of a car passing my backside while reversing (I was grateful to nanny for that one), and the blind spot warning system regularly kept me aware of vehicles running alongside where I might not otherwise see them (ditto), the collision warning system was a bit oversensitive when driving around town, where it alerted me to a car that appeared to be coming towards me but was really within its own lane on a curving road, and did so again on another occasion when pulling around a vehicle that was making a left turn. These problems only showed up a couple times throughout my week’s test drive, while most of the time I was quite happy to have an extra set of eyes to look out for me and my family as traffic whirred by.

Now that I’m talking about issues, a diesel engine that uses urea to make itself cleaner isn’t the easiest to live with. Normally the 30-litre urea tank gets filled up during regular servicing every 16,000 km or so (at a cost of approximately $1.85 per litre), but if for some reason you forget to take it in when it’s due and you don’t heed the warnings that it will not start after a given odometer reading, you’ll be left with an SUV that won’t start at all until you get some urea from your local dealer and pour it in yourself (and don’t worry about getting it on your hands as it’s no longer a bovine extract but is made synthetically now), have it towed into the dealer, or call for roadside assistance (and most roadside assistants don’t have spare urea to sell you). I recommend you pay attention to the warnings and make a detour to your dealer as soon as possible.

Of course the Grand Cherokee EcoDiesel’s dependence on urea is by no way a deal-breaker, the efficient, clean-burning turbo-diesel transforming the stylish Jeep into one of the best luxury off-roaders money can buy, even when stacked up against much pricier European and Japanese premium SUVs. Whether or not its improvements in fuel economy will save you money over the duration of its tenure isn’t the issue here, but rather the engine’s impressive performance, excellent range and fabulous towing capacity, all core reasons for purchasing a large SUV in the first place. That it gets immensely better fuel economy is just a very big bonus that you’ll appreciate throughout ownership.
©(Copyright Canadian Auto Press)
Car Shopping Tools