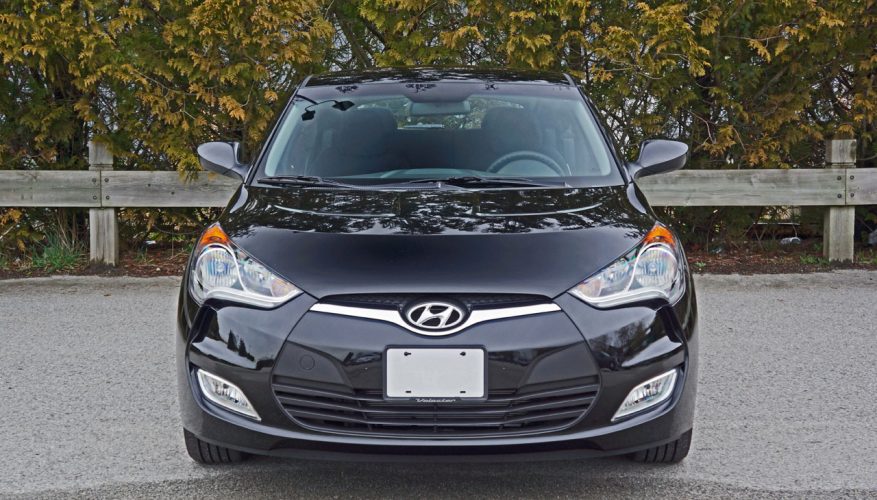 By: Trevor Hofmann
Adding a bunch of fancy features to a car in any given model year is nothing new, but offering a less expensive stripped down version really gets my attention, which is one of the reasons I requested this particular trim level in the sporty Hyundai Veloster, a car that can now be had for a sweet and low $17,999 plus $1,695 in freight and pre-delivery prep charges (plus a $878.34 no-haggle discount at the time of writing).

The Veloster’s standard 1.6-litre four-cylinder engine is impressive too. Along with the usual double overhead cams and 16 valves it also incorporates dual continually variable valve timing and direct injection for greater output and better efficiency, resulting in a sporty 138 horsepower and 123 lb-ft of torque along with a revised EnerGuide five-cycle claimed rating of 9.0 L/100km in the city, 6.7 on the highway and 8.0 combined with the base model’s six-speed manual, or 8.6 city, 6.6 highway and 7.7 combined for the six-speed EcoShift dual-clutch automated transmission that also includes Hyundai’s Active Eco system, this advanced gearbox being the only option my tester included, adding an extra charge of $1,400 and upping the final price to $19,399 plus freight (and a no-haggle discount of $966.12).

Along with better fuel economy, the dual-clutch transmission, or EcoShift DCT as Hyundai calls it, delivers a sporty driving experience enhanced by steering wheel-mounted paddle shifters. Positioned in the traditional racing car layout, with the right paddle for upshifts and left one for downshifts, the response to tugging on either is an instantaneous shift, much faster than you or even a professional driver could swap gears by using a conventional manual and of course quicker shifting than most torque converted automatics can manage as well. Dual-clutch transmissions produce less driveline drag too, which aids fuel economy.

Out on the road the engine loves to rev, which adds to the overall excitement level of this zippy little sports coupe. The redline starts at 6,750 rpm but lets you cycle it all the way up to 8,000 for the spine-tingling whine of a Japanese four-cylinder superbike (out of respect to the Veloster’s home market I would have referenced the South Korean-made Hyosung GT650R but its V-twin doesn’t make the same noises as say a Yamaha YZF-R1), while the dual-clutch gearbox snaps off shifts with even more efficiency than anything on two wheels. Likewise four thick tires grip tarmac better than two, the base Veloster’s stock 17s shod in a decent set of 215/45R17 Nexen all-seasons that match up well to the sport-tuned MacPherson strut front and torsion beam rear suspensions with stabilizer bars at both ends, for nice and crisp at-the-limit handling. For this class of car the Veloster is comfortable enough too, never jarring over pavement imperfections, its motor-driven rack and pinion powered steering easily following where it’s pointed even if you’re coaxing it quickly.

As mentioned there are two sets of ABS- and EBD-infused discs front and back, the former ventilated and measuring 280 millimetres and the rears solid and 262 millimetres across, ample for hauling a hurling 1,205-kilo (2 656-lb) Veloster down to standstill in short order whether scrubbing off speed methodically or in a panic situation, while they’re even quite good when pushed quickly through a curving stretch of roadway where braking before each turn is requisite and premature fade won’t only ruin the enjoyment factor but can also prove dangerous. During normal use the brakes are easy to apply and never grabby, another example of a car that’s well set up all-round.

A good set-up starts with good ergonomics, and to that end the Veloster’s front buckets are once again better than anything you’ll find in the compact sedan or hatchback sector despite this sport coupe’s low base price. They’re covered in a really nice high-quality woven black fabric held together with attractive grey stitching, with superb side bolstering allowing for that all-important lateral support needed when pushing hard through corners. Overall comfort is excellent, aided by the six-way driver-side adjustability I spoke of earlier. The steering wheel, shifter and pedals all fall ideally to hands and feet, the seat’s ample adjustability enhanced by the tilt and telescoping steering wheel I mentioned before, the rim a simple urethane synthetic but nevertheless thick and nicely shaped with comfortable thumb spats, not to mention a three-spoke design that’s better for performance driving.

These details in mind, I must say the Veloster’s interior is one of the best in its class. Ahead of the steering wheel are some of the nicest gauges you’ll ever see, their deeply set twin-dial design likely what subliminally had me referencing sport bikes earlier in this review. They’re well shaded from sunrays and therefore easily legible no matter the lighting conditions, while at night they give off a colourful array of digital and analog information, much of which can be controlled via the steering wheel buttons I mentioned before.

The gauges are surrounded in an attractive silver metal-like trim, like numerous other surfaces around the cabin including the trim around the centre vents that sidle up against the centre stack as well as the trim around the vents at each corner that visually melds into the door trim, the latter featuring the most interesting set of chainsaw-style pull handles (spent too much time in the bush as a kid). The metallic silver design theme continues between the seats where stylish buttresses connect the centre stack with the lower console, the DCT’s shifter also trimmed out with the glossy satin silver garnish. Additional detailing includes piano black lacquered plastic on that shifter and the gated surround just below, visually matched up to yet more of the shiny inky stuff ringing the centre dash-mounted HVAC controller knob and another strip circling the Veloster logo, incidentally where the pushbutton ignition switch goes if you’re willing to pay a bit more for options.

The design of the centre stack I keep mentioning is a real thing of high-tech beauty. Laid out vertically to optimize dash space, an optical drive at the very top is hooded by the pointed brow of the soft-touch dash top, while the aforementioned infotainment screen is surrounded by two sets of vertically stacked buttons, a row of audio, phone and setup controls underneath, and a tightly packed HVAC interface below these, its buttons arranged in an attractive V-shape. The infotainment system is filled with features excepting a back-up camera system or navigation, these items available in upper trims, but it’s easy to use. The HVAC system is also user-friendly being a straightforward manual design that should be second nature to most anyone. All switchgear is well made too, with a high-grade feel, good damping and very little side-to-side wiggle, Hyundai having become one of the best volume manufacturers when it comes to fit, finish and tactile quality.

The same goes for exterior finishings. While the Veloster’s overall design might have you standing back to take it all in, its aggressive frontal styling as intriguing as its muscular haunches and abruptly canted hindquarters, not particularly fast looking like a greyhound but instead powerful like a bull terrier, some of its finer detailing will make you want to come in a bit closer to get a better look. The multi-angled headlamp clusters are filled with reflective brightwork that glistens no matter the outside light, complemented by a set of sporty fogs positioned at the outer lower edges of what at first glance appears to be a large brake duct that curves upward to tuck under the halfway point of the headlights in a most unusually interesting yet very attractive way, the shape mimicking the outer edges of the large grille at centre, the latter of which is really made up of a narrow chrome-enhanced upper slit and lower grille opening bisected by a thick bumper cap, but the way Hyundai has penned it makes it appear like a big, bold grille.

The satin silver finished five-spoke rims are stunning too, whereas the Veloster’s rear end design can’t be described, it must be seen. One of the narrowest rear windows in the auto business sits up high near the roofline, the latter featuring a thin strip of painted bodywork before reaching frontward as a steeply raked piece of glass, the rearmost portion of the standard panoramic sunroof I previously covered. The high-mounted horizontally ovoid taillights wrap farther around the side of the car than they extend into its backside, but they do a good job of alerting surrounding drivers to your presence no matter which angle they’re coming at you from. Lastly the Veloster is finished off with a diffuser style lower valence fitted with one of the coolest twinned rectangular centre-mounted tailpipes available from any sports model for any price.

Hyundai refers the Veloster as a three-door coupe, but rather than confuse those who have already read my reviews of Minis, VWs and many other small cars, it’s probably best to dub it a four-door due to its single opening on the driver’s side, two doors on the passenger’s side and large hatch in the rear. Yes, you heard me correctly. The Veloster has two doors on the passenger’s side, both shorter than the driver’s door that’s long and more traditionally coupe-like. The passenger doors allow easy access to the front seat and both rear seats, the one behind the driver requiring some shuffling to get over to, complicated by a little hop over the flush-mounted cupholder-filled centre console. Once seated they offer ample room for average adult bodies, while even those who are wider but not too tall should be quite comfortable. My medium-build five-foot-eight frame had inches remaining in front of my knees and above my head, so I’m guessing six-footers should squeeze in easily enough.

Another Veloster bonus is cargo capacity, with an impressive 440 litres (15.5 cubic feet) of volume under the hatch and up to 982 litres (34.7 cubic feet) available when its 60/40-split rear seatbacks are dropped down to make a nearly flat load floor.

And that last bit of info is likely why the Veloster sells so well. To give you an idea just how well, the Veloster’s 3,444 total unit sales were stronger than the entire Mini Cooper line in Canada last year, not to mention the Scion FR-S and its more directly competitive tC model combined. I’m not sure how well it did against the Honda Civic Coupe or Kia Forte Koup as these models’ sales numbers are clumped together with their regular four-door Civic and Forte siblings just like Hyundai combines Elantra Coupe and five-door Elantra GT sales numbers with the ultra-popular four-door model (the Elantra sold more than 50,000 units in Canada last year), but it certainly does well for being such a unique niche model, its overall practicality no doubt swaying buyers at the time of purchase and likely keeping them happy throughout ownership.

On another owner satisfying note, the Veloster, which has won numerous awards over its quartet of model years, just garnered the U.S. National Highway Traffic Safety Administration’s highest 5-Star overall safety rating for 2015, an impressive feat.

I’m a fan for all these reasons, but mostly because the Veloster is totally and completely different from anything else on the road. It shows Hyundai has creativity and more so that it can execute an original idea very well, the Veloster really having no major fault. It’s a wonderfully inspired looking design followed up with great driving dynamics, impressive technical advancements throughout that help it eke out good fuel economy, plus about as much practicality as any compact sport coupe can offer, all packaged into a well made car with good expected reliability topped off by one of the best standard comprehensive warranties in the industry at five years or 100,000 kilometres.

And I’m only talking about the base model. There are upgraded SE and Tech trims that add more features and a Veloster Turbo that really pumps up the performance. I’ll leave that model and those trims to future reviews, but suffice to say that Hyundai has a lot to offer compact sport coupe fans with its superb little Veloster.