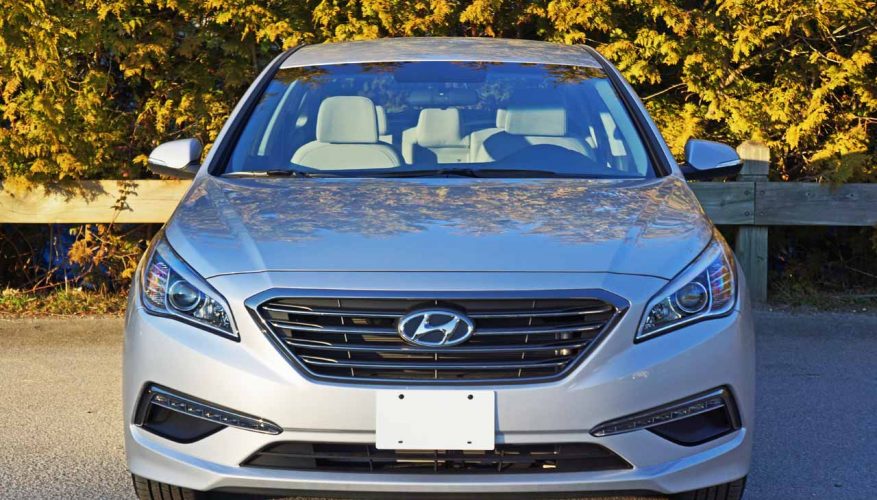 By: Trevor Hofmann
As far as four-door sedans go the Sonata is hardly the most important in Hyundai’s five-model Canadian lineup. Its entry-level Accent and second-rung Elantra combine to outsell their mid-size counterpart by more than five to one, yet this reality has nothing to do with the Sonata’s desirability within its own mid-size segment, as a similar scenario also gets played out within other mainstream volume brands. Still, while the majority of Canadians purchase smaller cars there’s a place in our market for larger family sedans, and the competition between brands for those buyers who step up to these more expensive models is sign enough that they’re a critically important component to the overall financial health of any automaker.

Certainly it’s about profits, but doing well in the mid-size sector might be even more important to a brand’s image. Name the volume brands that don’t offer a competitive mid-size model and I’ll show you a company that’s not in very good fiscal health. Remember Suzuki? While the Kizashi was good, its smaller size and underpowered engine didn’t fit North American tastes and therefore the car wasn’t very successful, and the brand’s automotive division is now gone from the U.S. as well as Canada. Mitsubishi’s Galant? It had the size and performance but lacked in other areas, therefore never finding enough buyers here in Canada and was subsequently pulled after the 2010 model year, and from the U.S. market after that. The tri-diamond brand’s financial health isn’t exactly robust on either side of the border, proving my point.

Hyundai and its Sonata, on the other hand, has been building a strong bond with Canadian mid-size buyers over the past 30 years, this new seventh-generation model’s more restrained yet still attractive styling starting showing up all over my city, and I’m sure yours. Yes, the last version was a standout design that swooped and curved its way into the hearts of mid-size consumers everywhere, looking more like a chromed up luxury sedan than the comparatively inexpensive four-door that it was. I was on that model’s launch trip back in 2009 and was as impressed as its myriad buyers have been over the past five or so years, but this said the new 2015 Sonata stimulates the cerebral cortex with near equal effect, yet does so in a more understated fashion that seems to be saying, “I’ve arrived and I don’t have to show off to get attention.”

Its hexagonal grille pulls cues from the big and boldly beautiful new Genesis, although the Sonata’s lighter looking lines make less of an aggressive statement when compared to Hyundai’s sport-luxury executive sedan. The Sonata is more of a family sedan anyway, so therefore it needs to have broader appeal for an audience that doesn’t necessarily gravitate towards bravado. Then again its bolder new grille is joined by a stylish set of LED fog lamps with dramatic chrome surrounds even in base trim, while the gorgeous jeweled headlamps wouldn’t look out of place if they were from any premium brand. The new Sonata’s front fenders sweep upwards from the elongated headlamps where an elegant chrome beltline reaches rearward before forming the lower garnish of the side windows. The chrome strip wraps up and around each rear quarter window and then back around the entire greenhouse for a completed look, while my GLS tester’s chrome door handles and LED-enhanced mirror caps add to the car’s classy lines. The Sonata’s multi-angle taillights are totally unique and attractive too, while the subtly sporty rear lip spoiler is part of the GLS upgrade. Everything culminates at the sporty matte black diffuser style lower valance incorporating a slick looking hexagonal chrome-tipped tailpipe. Rounding out the design is an attractive set of 16-inch twinned five-spoke alloys wrapped in 205/65R16 Hankook Kinergy GT tires, the same as included with the base model.

As mentioned the GLS sits just above the base GL model, while five additional trims are available above this. Despite my tester’s lower level trim I was taken aback by its overall appearance and very livable feature set. After pressing the proximity-sensing button on the driver’s side front door handle (there’s one on the passenger’s side too), I was treated to an interior that looks even more upscale than its appealing exterior design. Premium level soft-touch synthetic surfaces improve the look and feel of the dash top and front door uppers, while the harder surfaces Hyundai employs are attractively textured to appear like the pricier finishing. All lesser models come fitted with attractive light grey cloth upholstery featuring a tight woven fabric on the seat bolsters and sides plus a nice wavy pattern on the inserts. This model is devoid of any fake wood, but rather comes with superb looking patterned pewter silver trim spanning the dash and doors, while attractive darker silver surfaces surround the HVAC system and storage compartment lid on the lower centre stack, chrome embellishing lesser elements such as the rims around the dash vents and the vent controllers, as well as the knobs on the radio and HVAC interfaces.

That switchgear is excellent in quality and the 5.0-inch touchscreen infotainment setup is quite good for a base model. It features a welcome reverse camera system, while sound quality from the six-speaker audio system is pretty good whether listening to the AM/FM/satellite radio, single CD/MP3 player, or importing music from your personal device via the iPod/USB/aux inputs. These upscale features follow Hyundai’s usual value-laden strategy, the base Sonata getting more standard gear than most competitors, such as Bluetooth hands-free and three-way heated front seats, not to mention standard Drive Mode Select with Normal, Eco and Sport modes that control steering, engine, and transmission response.

For all of this automotive goodness Hyundai only charges $23,999 plus $1,695 for freight and dealer preparation, although at the time of writing the automaker was also offering a no-haggle discount of $1,252.48. If you spend just $2,300 more for the $26,299 Sonata GLS (currently offered with a $1,792.21 no-haggle discount) you also get exterior door handle welcome lights along with that proximity-sensing entry and pushbutton ignition system I spoke of earlier, not to mention a proximity-activated hands-free trunk that opens automatically as soon as you to stand close enough to the rear of the vehicle for a few seconds with the key in your pocket. Additional GLS equipment includes a comfortable eight-way powered driver’s seat with lumbar support, a heatable steering wheel, heatable rear seats, rear parking sonar, LED turn signals integrated into the side mirror housings, plus Blind Spot Detection (BSD) with Lane Change Assist (LCA) and Rear Cross Traffic Alert (RCTA).

In case you’re wanting more, additional Sonata trim levels include Sport, Sport Tech, Sport 2.0T, Limited and Ultimate 2.0T, and the breadth of features these upper level models offer range from styling and performance upgrades to the latest in infotainment technologies as well as near-premium levels of luxury. We’ve covered some of these trims in separate reviews so make sure you check them out.

The 2.0T designation denotes the highest grade engine offered in a Sonata, a 2.0-litre twin-scroll turbocharged and intercooled direct-injection four-cylinder with dual-continuously variable valve timing and two-stage variable induction that combines for 245 horsepower and 260 lb-ft of torque, while its fuel-economy rating is a claimed 10.4 L/100km in the city, 7.4 on the highway and 9.1 combined. My GLS tester and most other trims come with Hyundai’s larger displacement but less powerful 2.4-litre four-cylinder engine outfitted with the same direct-injection, dual-continuously variable valve timing and two-stage variable induction technology, albeit a more moderate 185 horsepower and 178 lb-ft of torque. Fortunately this engine gets better mileage than the turbocharged unit at an estimated 9.8 city, 6.7 highway and 8.4 combined, while it performed admirably at takeoff, around town, cruising on the highway and during passing maneuvers.

One of the reasons it feels so lively is its standard six-speed automatic with Shiftronic manual mode, which shifts promptly yet as smooth as any rival’s torque-converted autobox whether letting it do so on its own or rowing through its gear lever actuated manual-mode yourself. The Sonata’s rack-and-pinion steering imparts fairly good feedback for the class too, while its MacPherson front strut suspension with coil springs, Mando dual flow dampers and a stabilizer bar, and multi-link rear setup with coil springs, the same shocks and another stabilizer bar make for a supple ride that’s still nimble enough through sharp corners to be enjoyable.

I mentioned the term Drive Mode Select when going over the GL model’s standard feature set, but neglected to fill you in on the details. Next to the rear parking sonar’s “P OFF” button on the lower centre console, the “DRIVE MODE” button allows you to select from Eco or Sport modes, the former designed to help you achieve those fuel economy numbers mentioned earlier and the latter stiffening up the steering and adding quicker response from throttle input and gear changes. I’m not going to go so far as to say the Sonata GLS feels particularly sporty to drive, but it’ll have no problem keeping up to the Jones’s Camry and Smith’s Altima whether on the freeway or tackling a curving mountain road.

Mattering more to most who buy into this class is ride quality, which is excellent for inner city driving, rural backroads and highway cruising alike; refinement levels, such as engine, road and wind noise, which are all quite low, the latter aided by a 0.26 coefficient of drag; interior comfort, which is exemplary front and back; and overall roominess, ditto. The front seating area should be amply spacious for the majority of body types while the powered driver’s seat I mentioned earlier offers a plethora of adjustments for optimizing comfort, and rear passengers will be kept at ease with three-abreast seating that’s totally accommodating for full-size adults. Likewise the Sonata’s trunk is large at 462 litres (16.3 cubic feet), whereas 60/40 split rear seatbacks can be folded for passing through longer cargo that wouldn’t otherwise fit in the designated cargo area.

If you like what you’re hearing you’re certainly not alone. The Sonata has earned its place near the head of the mid-size family sedan table here in Canada, only upstaged by the Ford Fusion, Honda Accord and Toyota Camry when it comes to sales numbers, but really not by much. Factoring in that some of these models are purchased by fleet buyers (rental car companies, company cars for governmental agencies or large corporations, etc.) more often than others, which tends to reduce a model’s resale value, last year’s 13,645 Sonata sales compare well against the Fusion’s 18,472 fleet sale packed figure, the Accord’s 16,962 units, and Camry’s 16,029 deliveries for 2014. Then when compared to the Chrysler 200 at 11,655 (no doubt boosted up by a lot of fleet sales too), Nissan Altima’s 9,475 deliveries, Chevrolet Malibu’s fleet-supported 8,246 unit sales, Volkswagen Passat’s 7,520 sales, Kia Optima’s 7,408, Mazda6’s 3,023, and Subaru Legacy’s 2,924 deliveries last year, Hyundai should be proud of how well its Sonata fares amid such strong competition.

It all boils down that great value proposition I mentioned earlier, although if the Sonata hadn’t look great and driven well over the last couple of generations it wouldn’t have accumulated such an ardent following of loyal repeat buyers in the first place. The fact that every new 2015 Sonata comes standard with an IIHS Top Safety Pick+ award doesn’t hurt matters either, not to mention the car’s second-place ranking in JD Power and Associate’s 2014 Initial Quality Study (IQS), a survey in which the entire Hyundai brand was rated fourth out of 32 brands, besting every other mainstream volume carmaker including Toyota.

The new 2015 Sonata is the best version of the popular model yet, and one of the best choices in the mid-size sedan segment, period.
©(Copyright Canadian Auto Press)
Car Shopping Tools