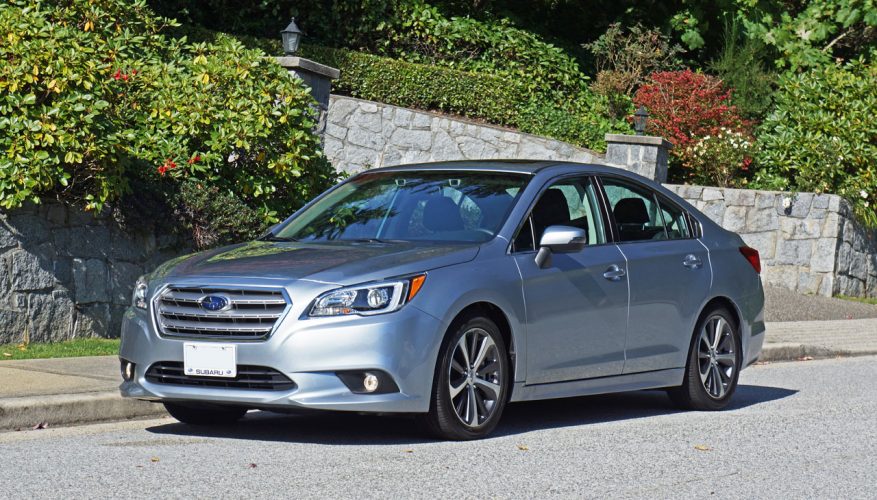 By: Trevor Hofmann
Just for fun I typed the word “Legacy” and “definition” into a popular search engine to see what it would come up with, and the first response was, “An amount of money or property left to someone in a will.” While interesting and possibly a positive association to some, I think the second definition is better suited: “Anything handed down from the past, as from an ancestor or predecessor.”

Now that the latest model has recently arrived as a 2015 model, Subaru’s Legacy has been with us for six generations spanning some 26 years. Over the decades each new model has been endowed with the types of qualities its relatively small but fiercely loyal ownership base demands, although its progeny might just be more notable. The old Legacy Wagon was the basis for the legendary Subaru Outback that came on the scene in 1993 as a 1994 model, which makes it one of the first modern-day crossovers. While there was once a very odd but ultimately useful Outback Sedan (dubbed SUS) and the Legacy Wagon is no more, the new 2015 Legacy is Subaru’s strongest contender in the midsize family sedan segment yet.

The Lafayette, Indiana-built four-door is new from the ground up, and most should find the stylistic changes to their liking. The car’s most dramatic design update is right up front, the outgoing model’s near-hexagonal grille (its trapezoidal grille had two tiny edges at each outermost top portion that almost made it six-sided) is now a full-fledged hexagon in similar fashion to the new Hyundai Sonata and Ford Taurus. The hexagonal shape is obviously a design trend that rings well with consumers or else Subaru and its rivals wouldn’t be choosing it to visually define their respective images, although it should be noted that the previous Legacy wasn’t the first incarnation of a six-sided grille on a Subaru – the brand has been using variations of this theme for years. Still, some will find it difficult to pick out a new Legacy from a new Sonata on a crowded city street.

The grille is bigger and bolder than anything that’s come before, however, and that’s a global trend that most gravitate toward. It portrays power and luxury, attributes the new Legacy has aplenty. Of course, the available power and luxury depends entirely on which trim level you opt for, and there are many to choose from starting with the 2.5i mated up to a six-speed manual or an optional continuously variable (CVT) automatic, followed by the fuel- and emissions-friendly 2.5i PZEV that comes standard with the CVT, 2.5i Touring in manual or CVT guise, and exclusive with the CVT the 2.5i Touring with the Technology package, 2.5i Limited, 2.5i Limited with the Technology package, 3.6R Touring, 3.6R Limited and the 3.6R Limited with the Technology package that I tested here.

If you hadn’t guessed already, 2.5i refers to the base four-cylinder engine that is 2.5 litres in volume and continues Subaru’s legacy of a unique horizontally opposed layout (hey, if it’s good enough for Porsche… enough said), whereas the 3.6R is also a “boxer” design albeit comprised of six cylinders and therefore lot more powerful while also more refined. Where the 2.5i puts out a respectable 175 horsepower and 174 lb-ft of torque the 3.6R produces 256 horsepower and 247 lb-ft of torque. That makes for a difference you can really feel and hear, the 3.6R launching the Legacy with confident clout while sounding superb as the revs climb, whereas the CVT feels like a regular automatic transmission because it delivers gear changes in conventional stepped fashion rather than the usual linear experience CVTs are known for. The shifts aren’t sharp at all, however. Instead, each transition slides from one to the other in a lazy slush-box sort of way, even when using the paddle shifters in manual mode. Truly, manual mode is more of a manual mood, and instead of the assertive shout of today’s self-shifting automatics it’s more of a relaxed sigh.

The Legacy 3.6R gets where it’s going quickly nevertheless, with all four wheels gripping the pavement for immediate takeoff no matter the road surface conditions. Handling is very good too, the Legacy’s fully-independent MacPherson strut front and double-wishbone rear suspension with stabilizer bars at both ends providing good balance and control during hard cornering while delivering a nice smooth ride on all but the harshest surfaces, assisted no doubt by my Limited tester’s Stablex ride control dampers and 18-inch alloys on 225/50R18 Goodyear Eagle LS2 all-season tires (the base model comes with 17s wrapped with 225/55R17 all-seasons), plus the brand’s legendary symmetrical all-wheel drive system.

All Legacy trims come standard with Subaru’s much-lauded all-wheel drive system as has been the case in North America since the second-generation car, although for 2015 it’s a new design that works in concert with brake-based active torque-vectoring which slows the inside front wheel to sharpen turn-in and minimize understeer. The new active-torque-split symmetrical AWD design is as user-friendly as possibly, allowing you to merely plant your foot on the throttle and let the electronics and mechanicals do the rest.

As you may realize already, the Legacy is the only mid-size sedan from a volume producer to offer all-wheel drive as standard equipment, but what I find strange is that most of its mainstream competitors don’t offer AWD at all. Back to that search engine, look up “all-wheel drive mid-size cars” and you’ll get the Legacy showing up on every list, but the remaining offerings are from much pricier premium brands other than some full-size mainstream competitors that aren’t really direct rivals due to their dimensions, and three mid-size contenders, the Buick Regal, Chrysler 200 and Ford Fusion, oddly all domestics. There isn’t a single import going after Subaru’s loyal all-wheel drive customers, which gives the Japanese brand a serious advantage in Canada’s snowbound provinces, especially important right now during this particularly cold winter.

Along with the technical and styling upgrades the new 2015 Legacy delivers a decidedly more premium experience inside, my 3.6R Limited featuring soft-touch synthetic surfaces across the dash-top and dash facing ahead of the front passenger, while both front and rear door uppers were comfortably padded, as were the perforated leather-like door inserts and nicely stitched armrests, all of which matched the attractive stitched leather sport seats with perforated inserts. Of course the steering wheel is leather-clad in Limited trim, as is the shifter knob, while attractive faux hardwood and satin-silver trim grace the dash and doors.

Subaru has also made great strides in the quality of the Legacy’s switchgear, now much more upscale than in versions past. Likewise the electronics being actuated are a lot more appealing, my Limited model also receiving the very well priced $1,200 Technology package (available with the 2.5i too, but only with the CVT) that added a handsome full-colour five-inch multifunction trip computer within the primary instrument cluster, along with proximity-sensing keyless access with pushbutton ignition and a host of impressive safety gear including steering-responsive fog lights and EyeSight, Subaru’s advanced autonomous emergency avoidance system that uses a pair of cameras mounted high on the windshield (two eyes are better than one, as the saying goes) to detect potential problems up ahead and then react with or without your involvement via pre-collision brake assist and throttle management, adaptive cruise control, lane departure warning, lane sway warning and lead vehicle start alert. Subaru’s latest TV spot showing a Legacy heading toward a crash test barrier and then automatically screeching to a stop before hitting it makes this point clear, and truly this system is a step ahead of its competitors, making the Legacy’s stopping capability as technologically advanced as its four-wheel drivetrain.

Before I get into some of the extras you get with either Touring or Limited trims, I should mention some of the other standard features that come with the 2.5i, such as a four-speaker display audio system utilizing a nice, clear, full-colour, high-resolution 6.2-inch touchscreen accessing AM/FM/CD/MP3/WMA and satellite capability as well as auxiliary, USB and iPod inputs, Bluetooth audio-streaming and of course hands-free phone connectivity, all manageable via steering wheel-mounted switchgear that includes cruise control too, while the standard list also adds tilt-and-telescopic steering, power windows with front auto up/down, automatic on/off headlights, a 3.5-inch multifunction trip computer, a premium-level electronic parking brake, a manual HVAC system with air conditioning, dual illuminated vanity mirrors, powered and heatable side mirrors within body-colour housings, and body-coloured door handles. The base 2.5i starts at $23,495 for the manual and $24,795 with the CVT, plus $1,595 for freight and pre-delivery prep.

The Touring package, at $26,495 for the manual and $27,795 with the auto, adds fog lights, 17-inch alloys, side mirror-mounted turn signals, a stainless steel exhaust tip (or dual stainless exhaust tips with the 3.6R), and a windshield wiper de-icer to the outside, plus the aforementioned leather-wrapped steering wheel and shifter, as yet unmentioned auto-dimming side and rearview mirrors, dual-zone automatic climate control, six-speaker audio, and a powered tilt and slide glass sunroof to the menu.

Limited trimmed models, at $31,195 for the 2.5i or $30,795 with the 3.6R, upgrade to the previously noted 18-inch wheels, Stablex ride control dampers, enhanced interior trim, leather upholstery, and larger multifunction trip computer within an electroluminescent primary gauge package, plus navigation becomes part of the infotainment system, as does text messaging capability and an awesome sounding 12-speaker audio system with a 576-watt amplifier and subwoofer. Voice-activated dual-zone automatic climate control is also part of the Limited package, as is a garage door opener, ultra-comfortable 10-way driver’s seat with memory, four-way powered front passenger seat, heated rear seats, rear climate control vents and HID headlights. My fully loaded tester came with all of these features as well as the Technology package for a grand total of $35,395 plus freight, very reasonable considering its standard all-wheel drive and advanced safety features.

Its fuel consumption should also put a smile on your face, coming very close to similarly powered rivals that don’t include the benefits of all-wheel drive. Keep in mind that Natural Resources Canada upgraded our rating system to a new five-cycle process for the 2015 model year (so don’t use these numbers for comparison against 2014 models), and the 3.6R’s 11.9 L/100km city and 8.2 highway estimates look very good, while the 2.5i CVT’s 9.0 city and 6.5 highway rating is excellent, even besting front drivers like the new 2015 Toyota Camry. The manual gearbox doesn’t fare as well at 10.7 city and 7.8 highway, but then again most of the Legacy’s competitors don’t offer a manual at all, giving the performance nod to Subaru once again.

And the Legacy gives up nothing to its rivals when it comes to interior comfort and roominess, both front and rear seating areas totally accommodating and thoroughly comfortable, while its trunk is a large 425 litres (18.5 cubic feet) with the advantage of 60/40 split-folding rear seatbacks for stowing longer items like skis. Under the cargo floor is a bit of storage for tools (or valuables) along with a compact spare tire – oh how Subaru has given up so many of its quirky traditions since the Legacy came on the seen more than a quarter of a century ago; that spare tire used to be located under the front hood, behind the engine and above the transmission.

Some traditions continue on, of course, such as Subaru’s legacy of reliability, the brand above average in J. D. Powers and Associates 2014 Vehicle Dependability Study (the most recent at time of writing), and even better, the new 2015 Legacy becoming Consumer Report’s “top-scoring midsized sedan.”

I must concur, as the new Legacy delivers a lot more than its competitors for a similar price, not to mention a higher than average expected resale value. The Legacy is a win-win proposition that should be on your shopping list.
©(Copyright Canadian Auto Press)
Car Shopping Tools