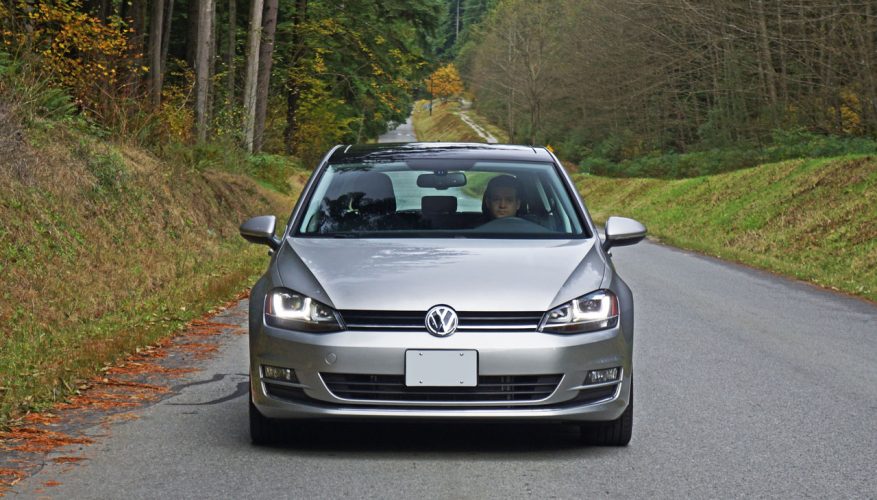 By: Trevor Hofmann
Last year Volkswagen brought an entirely new Golf to market, something that’s now occurred seven times. Not many automakers can make such a claim about a single model, but VW has been building this compact hatchback since 1974. In case you’re confused, the original Mk1 was dubbed Rabbit here in North America, but it was the same car with an arguably quicker, more endearing name.

A quicker name? True, bunnies are tough to catch, but 2012 RE/MAX World Long Drive Champion and world record holder Ryan Winther struck a golf ball 366.3 km/h (227.6 mph), which is much faster than even a Jackrabbit that can scoot along at speeds of up to 72 km/h (45 mph), or for that matter hares that have been recorded up to 80 km/h (50 mph), the ninth and seventh fastest mammals in the world respectively (or so I just learned). So maybe the Golf name wasn’t a bad choice after all.

The compact hatch certainly has had its share of success, finding more than 30,000,000 new owners (and who knows how many pre-owned buyers) since inception, making it the third best-selling vehicle ever produced and the second best-selling car. No, not bad at all.

Why do people love it so? Being one of my favourite rides and a popular choice amongst other professional pundits I know, I have to say it comes down to doing everything it needs to well and being priced within reach of the majority of buyers. On that note, when the Golf/Rabbit was first introduced it was an entry-level vehicle designed to replace the much-loved Beetle (that car the fourth best-selling vehicle ever), so while more refined and sportier than most of its rivals it was still priced near the bottom of the compact class. The good news is that some things don’t change.

Today’s Golf is priced very close to its compact peers despite delivering a lot more value than most rivals. First off it’s not the cheapest car in VW’s lineup, the $14,990 Jetta taking that position. The two cars have reversed roles over the years, and now a sportier and slightly more upscale base Golf can be had for $18,995, plus a very reasonable $1,395 for freight and pre-delivery prep. That’s a thousand bucks less than last year’s Golf, by the way.

Even in barebones Trendline trim that car hits the road with a lot more fire in its belly than anything else it’s up against, its direct-injection 1.8-litre TSI four-cylinder putting 170 horsepower and 185 lb-ft of torque down to the front wheels via a five-speed manual gearbox. A six-speed automatic transmission with Tiptronic manual mode can be had for just $1,400 more if that’s your thing, while the suspension underneath isn’t the usual front coil and strut, rear torsion beam setup that most competitors try to get away with, but rather a fully-independent setup comprised of coils and struts plus a 22-mm stabilizer bar up front and a multi-link (four-link) design with coil springs and a 19-mm stabilizer bar in the rear. The brakes? Rear drums aren’t on the base menu, but rather 272 mm solid discs complemented by 286 mm ventilated discs up front, plus the usual electronic aids such as ABS and EBD (which VW calls Electronic Brake-pressure Distribution instead of the usual Electronic Brake-force Distribution), plus the unusual albeit welcome addition of EBA (Engine Braking Assist) and HBA (Hydraulic Brake Assistant), not to mention automatic post-collision braking to go along with its ICRS (Intelligent Crash Response System).

You might think that those nifty LED turn signals integrated into the side mirror housings of top-trimmed mainstream models and premium branded cars are there just to make them look cool, but they were initially designed with safety in mind, and yes they’re standard on the Golf too, along with the power-adjustable and heatable mirrors within, as are the stylish daytime running lights integrated into the car’s slick looking new headlamps. Additional exterior gear that doesn’t normally come standard on rival compacts include variable intermittent aero wipers, a diversity antenna, a rear rooftop spoiler, dual exhaust, and stylish 15-inch alloy wheels on 195/65R15 all-season tires. But wait, there’s more.

Seven shades and colours including numerous metallics won’t cost you a dime more, my tester buffed up in the ideal German shade of Platinum Grey Metallic, which looks a lot more like a dark silver than light grey (silver is Germany’s racing livery). Unlike most competitors that give you a single “choice” of upholstery in base trim, the Golf lets you choose between Titan Black or Shetland beige “Zoom” cloth upholstery at no extra charge, mine appropriately black.

The only packages for the base model include the aptly named Cold Weather Package that adds heatable front seats and heatable washer nozzles for $250, and the Cruise Control Package that adds (you guessed it) cruise control and (you didn’t guess it) a leather-wrapped multifunction steering wheel for $400.

My tester was far from base, starting off with its 5-Door body style (the base comes with two long side doors plus a hatch and is dubbed 3-Door) that incidentally makes the Cold Weather Package standard. These upgrades and the two extra doors automatically bump the price up a thousand to $19,995 plus freight, while the car loaned to me was also upgraded to Highline trim, which bypasses the $22,895 Comfortline for a $28,495 window sticker. For that, however, you get a little luxury car. It includes most everything I’ve already mentioned as base, plus much of the Comfortline model’s standard kit, such as its multifunction leather-wrapped steering wheel with cruise control, a leather-wrapped shift knob and handbrake grip, plus a rearview camera, powered recline for the now heatable front seats, front fog lamps with static cornering lights, and automatic post-collision braking, while the leatherette upholstery is upgraded to real leather, the Comfort seats to Sport seats with 12-way power adjustment for the driver, and the 16-inch alloy wheels get replaced by 17-inch rims on 225/45R17 all-season rubber.

Added to my tester was a $2,195 Media Package featuring HID adaptive headlamps with automatic leveling and signature LED DRLs, plus the "Discover Media" infotainment upgrade with navigation and a fabulous sounding 400-watt Fender audio system with a subwoofer.

While that’s an impressive list of features, you can never judge a car by the sum of its parts. What impresses as least as much inside any Golf are subtler details that most competitors don’t offer, such as fabric-wrapped front roof pillars, a full soft-touch dash top, and soft-touch door uppers up front. Then again the old Golf had fabric wrapped pillars in the back too, and while the front door uppers weren’t as soft and pliable, both front and back door uppers were comprised of a quality matte textured skin that looked and felt much nicer than the hard shiny plastic used on the back doors of the new Golf. It’s a good-looking cabin all-round, although some disappointments include less premium-feeling (and sounding) switchgear, specifically the steering wheel stalks, window switches, and some dials on the centre stack that are now made from cheaper plastics that are more obviously hollow, whereas the rings around the radio knobs and HVAC dials are now quite flimsy feeling. I could never have said that about the outgoing model.

The seats are still superb, however, with impressive comfort and great lateral support, the latter of which is critically important because the Golf continues to set the compact hatchback segment’s handling benchmark. Flinging it into corners is a joy, its electromechanical speed-sensitive power steering responding to turn-in well and feedback quite good, while the car’s grip is absolutely wonderful considering the model I was driving wasn’t a GTI. Likewise the TSI Highline’s high-speed stability was excellent and ride much too good for a compact, amplified by a particularly quiet and refined interior. That is until you put it in reverse and the backup camera pops out of the tailgate making a very odd loud noise. Possibly a little grease needed?

Not to “squeeze” yourself inside, mind you. The Germans tend to be taller than average people and therefore the Golf had large door openings along with more than ample room for my Austrian-Swedish-Scottish mutt-breed dimensions when seated, about four inches of airspace above my five-foot-eight frame whether up front or in back. Golfs have always been ably suited to hauling cargo as well, and the 2015 model doesn’t disappoint in this respect with 490 litres (17.4 cubic feet) behind the rear seats under the parcel shelf, 670 litres (23.7 cubic feet) with the parcel shelf removed, and 1,520 litres (53.7 cubic feet) when the 60/40 split-folding seatbacks are laid flat. Laid flat isn’t exactly accurate, as the seatbacks sit a little higher than the load floor, which isn’t ideal when trying to keep a large object horizontal. Fortunately this can be remedied quickly by moving the cargo floor up a notch, at which point the cargo floor is perfectly flat.

Now that we’re talking pragmatic issues, the powerful little 1.8-litre engine uses regular unleaded fuel, saving about 10-percent at the pump compared to premium unleaded. With the manual gearbox it gets a claimed rating of 9.3 L/100km in the city and 6.4 on the highway, whereas the smooth shifting automatic I drove was good for the same city rating and a slightly thirstier 6.5 L/100km highway estimate. These numbers appear less efficient than last year’s Golf despite the new engine’s many improvements, but don’t let the figures fool you. In case you haven’t heard, Natural Resources Canada finally brought our EnerGuide fuel economy estimates closer to reality via a new five-cycle rating process that replaces our old two-cycle system, so you can be pretty confident that an automaker’s fuel efficiency claim can be achieved. In the case of the Golf TSI, I can attest with an average of 8.0 L/100km during my weeklong test, which sits right in the middle of the EnerGuide estimate.

I mentioned that a number of my professional colleagues like the new Golf, but that’s too much of an understatement not to expand on. So far, the new seventh-generation Golf has won the Best of the Best Award from the Canadian Automotive Jury (CAJ), Best New Small Car over $21,000 from the Automobile Journalists Association of Canada (AJAC), 2015 North American Car of the Year, World Car of the Year, numerous other Canadian, American and global COTY and best buy awards, and quite possibly its most important award of all, a Top Safety Pick+ rating from the IIHS. Last but hardly least, Volkswagen’s 1.8 TSI four-cylinder engine also received Ward’s 10 Best Engines recognition.

Not everything about the new 2015 Golf is an improvement, but most things represent a sizable leap ahead. It looks great, drives wonderfully, gets better fuel economy, features a better than average interior with loads of standard features, can be optioned out like a premium car yet still doesn’t break $30k, while the base model is a g-note cheaper. Expect to see a lot of these new Golfs in your neighbourhood soon.
©(Copyright Canadian Auto Press)
Car Shopping Tools