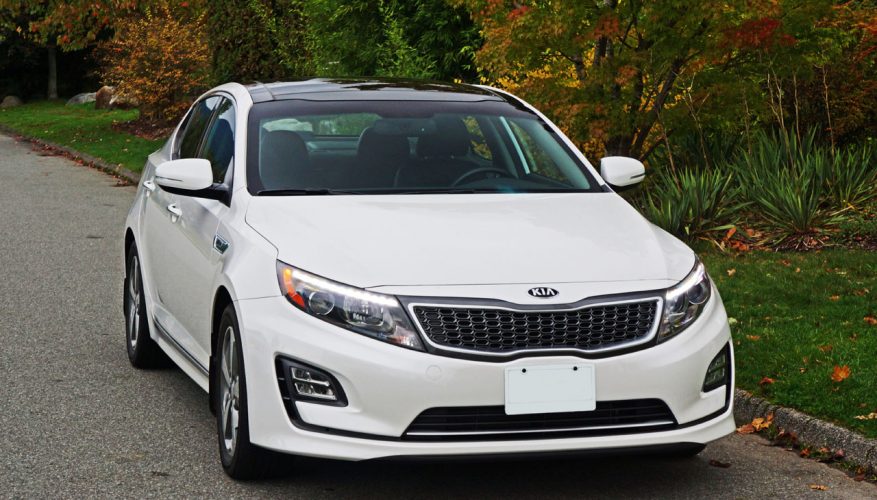 By: Trevor Hofmann
If ever there was a car ten times more exciting to look at than it is to drive, the Kia Optima Hybrid is it.

But don’t go thinking it’s a bad car or anything remotely negative. The Optima Hybrid is just so aggressively attractive that its comfortable, relaxing performance is a bit of a letdown. On the positive, it’s every bit as thrilling to pilot down a curving two-lane roadway as a Hyundai Sonata Hybrid or Toyota Camry Hybrid, all of the above only capable of getting the blood boiling if a tendency to produce body roll and then understeer to the point of squealing and squawking low rolling resistance tires when pushed hard is your idea of excitement. It isn’t mine, but then again I do get mighty pumped when my fuel bill goes down.

My opening sentence was both a compliment and derision of the new Optima Hybrid, its eye-catching styling making it one of the best looking four-door sedans in the mainstream midsize volume-brand class. This has helped it sell very well, a beauty that is much more than just skin deep as witnessed by the car’s impressive interior, replete with soft-touch synthetics across the dash, door uppers and armrests, not to mention myriad features.

My tester came in top-line EX Premium trim which is priced at $36,695 plus $1,485 for freight and pre-delivery prep, while the mid-grade Optima Hybrid EX starts at $33,695, and lower end LX model still boasts a long list of standard kit for just $30,095 plus freight. A cursory glance shows off automatic LED-enhanced headlamp clusters with fog lights just below, LED turn signals integrated into the housings of the heated and powered side mirrors, split-chrome door handles, chrome door mouldings, cool LED light bar tail lamps, a hidden exhaust pipe (odd because automakers are normally boasting about twin-chromed tailpipes), plus front and rear splashguards at the backs of standard 16-inch aerodynamically designed five-spoke alloy wheels wrapped in, you guessed it, low rolling resistance rubber.

To get inside, the Optima Hybrid LX comes standard with a proximity-sensing remote that also connects through to a pushbutton ignition system, while Kia hasn’t held back on premium features like a standard leather-wrapped tilt and telescopic multi-function steering wheel, the latter incorporating the usual audio and cruise controls plus an "Active Eco" switch for getting the most out of a tank of gas. Just ahead of the driver is an enhanced LCD Supervision primary gauge cluster incorporating a large full-colour multifunction display at centre and unique hybrid information plus an engine temperature gauge where the tachometer would normally go on the left, the right-side dial made up of the usual speedometer and fuel gauge.

Kia hasn’t only designed the primary instruments around the driver, but the secondary ones found on the centre stack too. Visually it appears as part of the primary gauges, and is slightly canted towards the driver as well. Between two large vents Kia’s excellent full-colour UVO infotainment touchscreen display takes up the topmost portion of the centre stack, complete with a useful rearview camera, while just below in a separate section resides a surprisingly conventional set of radio knobs and buttons, much appreciated compared to the types of touch-sensitive sliders some carmakers are pushing on us these day, which rarely work as advertised. The six-speaker stereo is AM/FM/CD/MP3 and satellite radio compatible plus features the usual aux and USB ports as well as Bluetooth hands-free connectivity. Directly below the radio controls is the Optima Hybrid’s HVAC interface, which incorporates convenient automatic dual-zone climate control with cabin air filtration. A leather-clad shifter knob and boot take up most of the lower console, except for standard heated seat buttons that also featured forced seat ventilation on my EX Premium trimmed tester.

This cooling air comes through perforated leather upholstery, a step up from the standard cloth seats LX and EX models come with. It matches the LX model’s standard leatherette door trim and console lid, and in EX trim is complemented by a truly luxurious stitched leatherette dash top. I found the standard powered driver’s seat quite comfortable even after a long stint behind the wheel, its lumbar support especially appreciated to keep the lower back feeling fresher than it would otherwise be. The standard seat heaters work well too, featuring just two temperature settings but nice and toasty when set to the high position just the same, the rear outboard seats getting heat as well in EX models. This trim receives a heated steering wheel too, especially nice on cold winter mornings, while power remote mirrors are heated to get moisture or ice off in base trim and with the EX they’re power-folding to stop them from getting whacked in parking lots, plus the EX model’s rain-sensing wipers are ideal for drizzling commutes when the weather doesn’t seem to know if it wants to clear up or stay miserable. The EX’s soft red interior mood lighting could help to improve one’s state of mind in such circumstances, even lighting up the rims of the dual front cupholders, or if that’s not enough to boost your spirits the dual-pane panoramic sunroof overhead should allow for maximum vitamin D intake. Lastly, stainless steel illuminated door scuff plates add a little eye candy while climbing into the EX.

Driving around town in the Optima Hybrid is a comfortable, smooth and effortless experience, helped along by the EX model’s very handy automatic windshield defog system to keep the windshield clear, and an auto-dimming rearview mirror to keep shining lights at the rear from searing the retinas, a convenient sunglasses holder overhead to keep the Ray-Bans close at hand, power windows with express up and down for those moments at the drive-through, and last but hardly least, a cooling glove box to keep beverages cold so that you don’t have to order a full meal deal and instead drink something healthier than liquefied sugar with your wrap.

My EX Premium tester had more gear yet, including the aforementioned air-cooled and leather-clad seats, a powered passenger seat, driver-side memory, a larger eight-inch infotainment display, voice-activated navigation, an Infinity audio system with excellent sound quality, handy rear parking sensors and blind-spot detection. My test car was covered in a beautiful coat of Snow White Pearl paint, a $200 charge that’s worth every penny.

I slammed the Optima Hybrid at the beginning of this review for being as tepidly exciting to drive as its main competitors, but I must say the 17-inch alloys on the EX and EX Premium helped to keep it locked in its lane despite its 215/55R17 Kumho Solus KH25 low rollers, the Optima’s fully independent suspension delivering adequate cornering prowess as long as you don’t push it too hard. The problem is its powertrain really likes to scoot along thanks to almost 200 combined internal combustion and electrified horsepower, the internal combustion engine (ICE) part of that equation being a 2.4-litre direct-injection Atkinson-cycle four-cylinder with dual-cam variable valve timing that makes a total of 154 lb-ft of torque at 4,500 rpm, whereas the electric motor produces 151 lb-ft from zero to 1,630 rpm. It all works through a six-speed automatic with Kia’s Sportmatic clutchless manual shift mode for performance that’s more than adequate if not exhilarating.

Braking is good due to four-wheel discs with the usual ABS and electronic brake-force distribution, while traction control and electronic stability control make sure the Optima Hybrid’s tires adhere to the road as much as possible. On that note it helps to see where you’re going, the EX model upping the forward lighting ante with a set of HID headlights featuring nice looking LED daytime running lights that were complemented by LED front fog lamps. A full assortment of airbags gives confidence that all occupants are as protected from accident as can be, but the thought of ruining the Optima Hybrid’s beautiful bodywork is really too much for this author to contemplate.

What I don’t like? A fixed rear seat that makes it impossible to carry skis unless you opt for a roof rack, and to add insult to injury the Optima Hybrid’s trunk is eaten up by the rear bulkhead mounted battery leaving just 305 litres (10.8 cubic feet) of space for gear, which in case you were wondering is less volume than a subcompact Kia Rio Sedan’s trunk, let alone the boot in the compact Kia Forte Sedan. Most of the Optima Hybrid’s rivals offer larger trunks and some even include folding rear seats with room for said skis.

In the end, it’s styling that initially gets buyers into new car showrooms and the Optima Hybrid has that in spades, which no doubt has been affecting its sales growth. Last month the electrified sedan’s sales grew by a staggering 88 percent over January of last year, which was the best January on record since it debuted in 2011. Additionally, the regular Optima is a 2015 Canadian Black Book “Best Retained Value” Award Winner in the mid-size car category behind the Subaru Outback, which is a wholly different kind of wagon-based crossover utility, and ahead of the Honda Accord, speaking volumes about how this model has been accepted in the marketplace and no doubt reflecting on the Optima Hybrid’s long-term depreciation as well.

For the best looking midsize mainstream hybrid that money can buy, not to mention one of the best values for the money asked, the 2015 Kia Optima Hybrid delivers the goods. No wonder sales are up.
©(Copyright Canadian Auto Press)
Car Shopping Tools