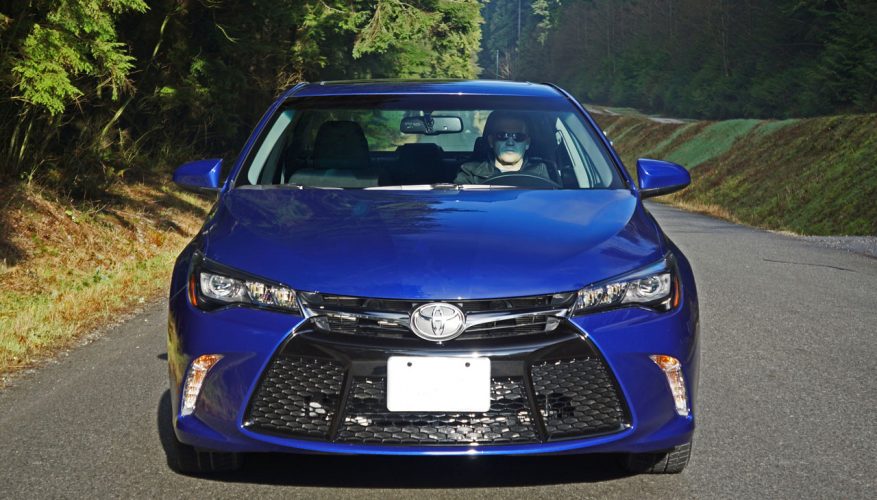 By: Trevor Hofmann
As if the best-selling Camry wasn’t doing well enough already, Toyota Canada just reported a 60.8-percent improvement in last month’s sales over January of 2014 with a total of 1,045 delivered. The only models in Toyota’s lineup that sold better last month were the RAV4 and Corolla, helping Toyota Canada achieve a new January record with a total of 10,249 units down the road. Not a bad result for a month that saw our dollar slump and economic recovery appear to start flatlining, resulting in lower interest rates and… aha! Not a bad time to buy a new car after all.

And I really can’t blame these buyers for snapping up the new Camry so quickly. The 2015 update is a great looking redesign that appears like much more than a mid-cycle refresh, and the new XSE trim level I recently tested takes the Camry’s solid, dependable, reliable character into a decidedly sportier arena that none of its volume brand rivals have a direct answer for.

Just one look and you’ll see the Camry XSE is different. It starts off with the visual changes made for 2015 including the larger more aggressive grille opening, except that, like the SE and Hybrid SE, the bumper cap is redesigned and finished in gloss black instead of body colour and the lower portion of the grille features three gloss black mesh inserts instead of the usual matte black horizontal ribbed design. The same forward canted stacks of fog lamps carry over from base LE to all other trim levels including the XSE, details I’m certainly glad weren’t changed. Ditto for the shape of the attractively penned multi-angled headlights, although in the XSE they get a unique set of lenses incorporating LED daytime running lamps and the added benefit of full LED headlamps when optioned out with the V6 that I just happened to be fortunate enough to test.

As is easy to see, the entire Camry range has gone through a dramatic metamorphosis from head to tail, shunning the outgoing model’s more upright look for a sleeker more aerodynamic design, the roof being the only body panel unaffected by the redo. Like the fogs, shape of the headlamps and taillights the XSE wears the same chrome detailing as every other trim, the upper front grille incorporating a wing-style brightwork strikethrough centered by Toyota’s stylized tri-oval “T” logo, the side windows surrounded by a nice thin strip of chrome edging, and the rear end wearing the mirror-finish shiny stuff overtop the license plate. Only a twinned set of chrome-tipped tailpipes (with the V6, the four-cylinder SE, XSE and Hybrid SE only get one), a slightly reworked lower valance and a trunk lid spoiler differentiate the XSE’s backside from all but the SE and SE Hybrid unless you’re looking at this sportiest Camry from an angle, at which point its fabulous looking 10-spoke 18-inch alloys on 225/4518 tires truly stand out. My tester’s gorgeous Blue Crush Metallic paint would’ve been a dead giveaway too, if it weren’t also shared with the lesser SE.

Inside, the differences are even more noticeable. As soon as I opened the door my eyes were immediately pulled toward the XSE’s unique suede-like Alcantara door inserts, stitched together with a double seam of bright red thread. The theme continues throughout the interior, the red stitching also adorning the front edge of the soft touch dash top, leather-clad steering wheel, shifter boot, centre armrest, and beautifully detailed sport bucket seats, which also get the Alcantara treatment on the bottom and lower back inserts as well as full upper back potions for a Velcro-like adhesive quality during hard cornering.

Hard cornering in a Camry? You heard me. Along with those aforementioned 18-inch rims the XSE gets a set of sport-tuned dampers to go along with firmer bushings, higher-rate coil springs and a more performance-oriented steering setup, all resulting in the most capable Camry I’ve ever driven. Even in town the steering feels sharper and ride quality, while still totally compliant and comfortable, exudes a more purposeful solidity. Calling it a true sport sedan wouldn’t be fair to cars like Toyota’s own Lexus IS or GS, but as far as midsize four-doors from mainstream volume producers go this new Camry XSE has taken performance up a notch or two.

My tester was unfairly shod in a set of Bridgestone Blizzaks, an excellent winter tire and responsible choice for my mid-January weeklong test, but we’ve had an unusually warm and mild winter on the West Coast this year and therefore these excellent snow tires were not only unrequired but they hampered performance over dry and damp pavement. Coursing through a favourite mountainside twister I could definitely tell the XSE’s chassis was up to task, the car remaining flat through tight high-speed curves, its response to quick back and forth steering input composed and controllable, and overall poise over undulating and less than ideal tarmac impressive, but when pushed as hard as I would have liked to go the tires inevitably gave up grip before the suspension was ready to relent, leaving me begging Toyota for a rerun when the winters come off and regular all-seasons go back on. The only weakness I could ascertain from my circuitous adventure would be the brakes, which while very good as far as midsize family sedans go, aren’t upgraded over their regular size or capability for XSE duty and therefore experienced some fade after repeated application during aggressive driving.

Like all Camrys the XSE gets a set of 297-mm (11.8-inch) front ventilated discs and 282-mm (11.2-inch) solid rear discs with a single-piston sliding caliper on each rotor, information most of us don’t need to know because it only matters that they stop when we put our foot on the middle pedal. And the Camry XSE’s do just that when called upon during regular day-to-day driving and extremely quickly in panic braking situations, at which time they’re aided by ABS, electronic brake-force distribution and emergency brake assist. Traction and stability control intervene when needed too, and if there’s no avoiding an accident the Camry is equipped with all the usual airbags as well as the unusual but welcome addition of rear seat side airbags and dual front knee blockers. These features, plus the Camry’s inherently strong, impact absorbent body structure make it a very safe car.

Likewise it’s also wonderfully practical; another attribute most don’t have a difficult time appreciating when talking about the Camry. It’s as roomy as you’ll probably ever need a four-door sedan to be, and those sporty looking XSE seats are incredibly comfortable, the driver’s eight-way powered controls including very effective powered lumbar support and the front passenger getting a four-way powered perch. The trunk is amply large at 436 litres (15.4 cubic feet) and the rear seats fold 60/40 for stowing longer items.

Along with the XSE’s premium-like interior (much of which can be found in the base Camry LE too, such as the soft-touch plastics I referred to earlier) come top-level features such as a seven-inch infotainment system with navigation, while you can add a $1,900 Upgrade Package to four-cylinder XSEs that includes an auto-dimming rearview mirror with an integrated compass, a universal garage door opener, power glass sunroof and a blind spot monitoring system.

If you order your XSE with a V6 you’ll get a number of those features included as well as a superb sounding 10-speaker JBL audio system, rear cross traffic alert to go along with the blind spot monitoring, and of course a 3.5-litre six-cylinder powerplant capable of 268 horsepower and 248 foot-pounds of torque for a great deal more excitement when taking to those corners, and a nice sounding exhaust note too. The standard six-speed manual gets paddle shifters for a much more engaging hands-on driving experience than the shift-lever manu-matic mode that comes standard, the paddles only shared with the lesser SE, but that model is only available with the base 2.5-litre 178 horsepower four-cylinder.

The 2015 Camry XSE V6 starts at $33,650 plus $1,620 for freight and pre-delivery prep, which is $5,660 more than the four-cylinder XSE model that as noted comes with fewer standard features. Both receive additional gear such as proximity sensing Smart Key remote access and pushbutton ignition, dual-zone automatic climate control, heated front seats, a backup camera, plus great looking red, white and black two-dial primary gauges that are circled in satin silver and bookend a bright, clear multifunction display, while that satin silver trim also improves the look of the steering wheel, dash trim, centre stack surround, lower console detailing and door trim, all adding to the XSE’s sporting image.

That last point would have been where previous sporty Camrys would have left off: image. Rather than offering much in the way of real performance gains the XSE’s predecessors were more about upping the Camry’s styling with sporty design details. This page in the Camry’s playbook appears turned, with a model that delivers a satisfying amount of tangible performance improvements to go along with its spicy styling upgrades, resulting in one of the best performing midsize sedans in its class.

So about those tires, Toyota… Can I rebook the XSE for say, May?
©(Copyright Canadian Auto Press)
Car Shopping Tools