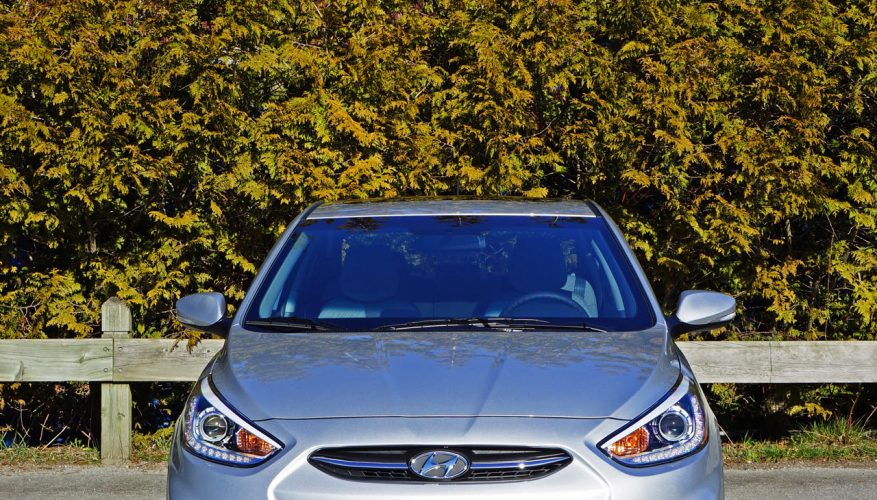 By: Trevor Hofmann
Do you want to try and guess which subcompact car Canadians liked the most last year? You guessed it: the Hyundai Accent (as if I’d start off a Hyundai review by talking up a Chevy or Ford). You might be surprised at the rate we bought up Accents compared to its direct competitors, however. Last year Canadian retail and fleet buyers purchased 23,173 Accent hatchbacks and sedans, and that wasn’t even a record-breaking year (29,751 units in 2008). The next best selling subcompact was the Kia Rio (a Korean brand owned by Hyundai and a model based on the Accent, incidentally) that didn’t even break 15k with sales of just 14,458 units, while the third-place Nissan Versa sold 13,314, fourth-place Honda Fit delivered 11,732 examples, fifth-place Ford Fiesta found 9,312 new homes, sixth-place Toyota Yaris sold 8,530 units, and seventh-place Chevrolet Sonic found 8,036 buyers. Yes, the little Hyundai was bought up at a rate almost three times greater than the Chevy and close to five figures more than its closest competitor in 2014. Do these Accent buyers know something you don’t?

Fact is that the Hyundai Accent is an excellent car at a great value. It also helps that it’s available in two body styles to appeal to different segments of the subcompact market. From a styling standpoint it not only doesn’t break any visually offensive rules, it looks great no matter the trim level. What’s more, as is always the case with Hyundai’s lineup the Accent comes filled with standard features (including some that rivals don’t even offer optionally) and offers many more options than its competitors, while its drivetrain is the most powerful and one of the more advanced in its segment, with excellent fuel economy and better than average expected reliability. Interested yet?

I’m not here to sell you a car, but I won’t hold back when I experience something that truly impresses me either, and the Accent has done that to me over and over throughout the years. For 2015 it gets even better with a redesigned grille and new headlamps that get stylish LED daytime running lights in the top-line GLS that I drove, not to mention a fabulous looking set of 16-inch machine-finished twin five-spoke alloys riding on Kumho Solus KH25 195/50R16 all-season tires that endow it with more fashionable sophistication than last year’s iteration – the base model gets new wheel covers for its 14-inch steel rims.

Inside, the upholstery of all trims have been upgraded, the three lesser models getting Grey Woven Cloth and the GLS featuring a nice light grey fabric with a white wavy thread pattern on the seat and door inserts that Hyundai calls Grey Tricot Cloth. The cabin also gets new brushed chrome door handles to match the brushed metal trim on the steering wheel, centre stack, lower console and surfacing around the door panel switchgear that extends under the armrests for a very classy look, while a new reversed LCD radio display is easier to read. All Accents get a new passenger detection sensor for the airbags too, while an exterior temperature gauge is now standard with air conditioning.

Along with the LED DRLs, the GLS model I tested features new welcome and escort functionality in its unique projection style headlamps, as well as automatic headlight capability. Lastly, three new available colours include Sunflower Yellow, Coffee Bean (brown), and Pacific Blue (navy), the latter replacing Marathon Blue, while Triathlon Grey, Ultra Black and Century White continue forward as the only colours (or rather shades) available with base L trim, the GL, SE and GLS getting the additions of the new brown and blue hues as well as carryover colours Ironman Silver and Boston Red. Sunflower Yellow is exclusive to new SE (Special Edition) trim, which for $1,000 over the second-rung GL auto I tested last year, adds a Sport Appearance package that includes Hyundai’s great looking chrome-enhanced signature fog lamps, the 16-inch alloys noted before, and a powered tilt and slide glass sunroof.

I hope to test the new SE at some point this year and would love it if our example were kitted out in Sunflower Yellow paint, as it would look stunning in photos, but this time around our top-line GLS tester wore a more conservative coat of Ironman Silver. Just the same it looks much more upscale than almost anything else in the mainstream subcompact arena. I’ve made mention of the new GLS improvements, and take note that all of the SE features are standard on the Accent’s top trim level as well, whereas this model also includes turn signals integrated within the mirror caps, its body-colour mirrors and door handles actually grandfathered up from the base model. A nice thick high-quality leather-wrapped steering wheel joins GLS trim too, as does a user-friendly three-dial automatic climate control system.

Additionally I should mention some of the items included in the GLS that are first offered in lesser trims. I’ve already covered the SE, which leaves the base L and mid-grade GL, the latter of which offers remote keyless entry, powered windows with driver’s auto up/down, heated side mirrors, telescopic steering, an additional set of tweeters and satellite radio to the stereo, steering wheel audio, Bluetooth hands-free and cruise controls, air conditioning, heated front seats, 60/40 split-folding rear seatbacks for extending the usefulness of the Accent Sedan’s 388-litre (13.7 cubic-foot) trunk, and a six-speed automatic transmission.

The base Accent L can only be had with a six-speed manual and is the only model that offers this very competent and fairly sporty gearbox, which I must say is a shame. Items my tester featured that come standard with the L included powered door locks, a 172-watt AM/FM/CD/MP3/USB/AUX/iPod capable audio system, driver’s seat height adjustment and sliding sunvisor extenders, plus a host of safety gear including all the usual airbags, active front headrests, three adjustable headrests for the back seat, vehicle stability management with electronic stability and traction control, and ABS, electronic brake-force distribution, plus emergency brake assist for the (are you sitting down) standard four-wheel disc brakes.

The reality that most of the Accent’s competitors don’t even offer safer, quicker reacting and shorter stopping rear disc brakes might come as a surprised to you, but it’s a major safety bonus Accent buyers get at no charge. Improved braking performance makes driving more fun too, because if you can’t stop quickly it’s advised not to drive quickly either, although you’ll have a tough time holding this little sedan back when foot hits the throttle.

Yes, that most powerful and more advanced engine I mentioned earlier is Hyundai’s 16-valve, DOHC, 1.6-litre four-cylinder with direct-injection and dual continuously variable valve timing that puts out a heady 138 horsepower and 123 lb-ft of torque, which overwhelmingly trounces every competitor but the aforementioned Hyundai-owned subsidiary model based on the Accent, while delivering fuel economy that’s easily on par with the subcompact segment average (even matching the tepidly warm 109 horsepower, CVT infused Nissan Versa Note) at 8.7 L/100km city, 6.3 highway and 7.6 combined with the manual or 8.9, 6.3 and 7.7 with the as-tested automatic.

Sitting inside, all of the nice detailing I mentioned before gets highlighted with glossy piano black lacquered plastic on the centre stack and gearshift surround, plus nice large circular Supervision primary gauges for good visibility no matter the lighting conditions, and to the left an ActiveECO button, standard with automatic-equipped models, which retards throttle response by modifying engine and transmission control to get up to seven percent more from each tank of regular unleaded, plus a stability control off switch just in case you find yourself on a racetrack (not likely) or need to extract yourself from a snow bank (very likely on the east coast this year). On the centre stack the new reversed LCD display is indeed easier to read (I wonder who came up with this brilliant idea?), while the upgraded six-speaker audio system sounds excellent for this class, and two-way heated seats were most appreciated during winter’s cold, especially while waiting for the automatic climate control system to warm up. All the switchgear is excellent in quality, especially the power window switches that look stylish as well. Lastly, a centre armrest is covered in cloth and padded for comfort while the driver’s seat is truly comfortable with good support overall, and ditto for the front passenger and rear seats, the latter offering up decent legroom for the class.

The aforementioned power makes the Accent fun to drive as noted, but it also tracks very well at high speed and takes to the corners effectively. Its suspension is tuned a bit too softly for out and out performance driving, Hyundai instead choosing to deliver an extremely comfortable ride that makes the Accent feel larger and more composed than the subcompact class norm. The six-speed automatic is extremely smooth shifting too, and it features the added benefit of manual mode for those moments when you want to hold a given gear through the corners or, alternatively, short-shift to eke out even better fuel economy. All-round the Accent feels safe, secure and confidence inspiring no matter the weather conditions.

Added to the Accent’s numerous attributes is a five-year, 100,000 km comprehensive warranty, the last two years of which would cost you a great deal more if added to one of its competitors, but comes standard for the base Sedan L Manual’s entry price of $13,249 plus $1,595 for freight and pre-delivery prep (at the time of writing Hyundai was showing an additional $500 no-haggle discount on its retail site, too). The well-equipped GL Auto ups the price to $17,149, sporty new SE Auto increasing it to $18,149, and totally loaded GLS Auto that I tested retailing for only $19,199 before discount.

At such a great value and with so many advantages it’s no wonder the Accent sells as well as it does.
©(Copyright Canadian Auto Press)
Car Shopping Tools