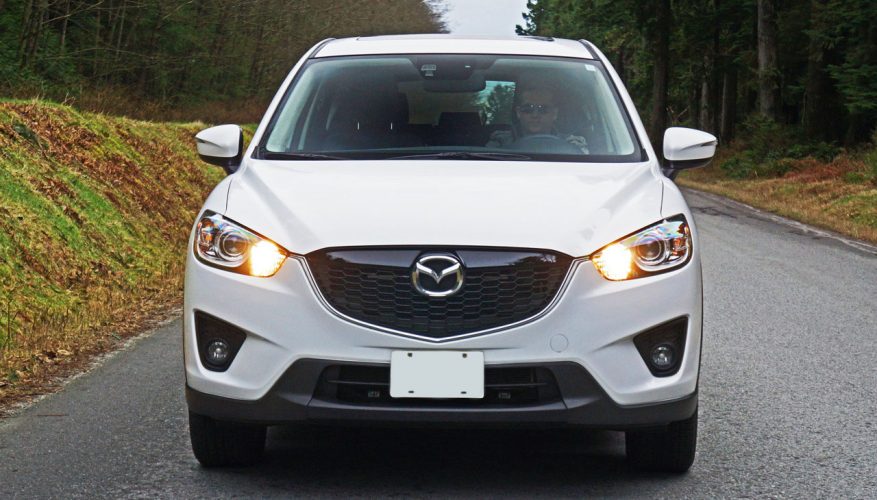 By: Trevor Hofmann
It’s one thing to come up with a good looking well designed car or SUV, and quite another to craft a unique yet attractive design language for an entire brand that transfers just as nicely from the long flowing lines of a sports car or midsize sedan to a compact hatchback or crossover utility. This is what Mazda has done with its new “KODO – Soul of Motion” design direction, first shown in the 2010 Shinari concept, after which the production results have been very intriguing.

Oddly, Mazda’s oldest chassis design, and the only one to still roll on a Ford undercarriage and use blue-oval mechanicals, was the first of its models to get the new Kodo design language, debuting on the 2013 CX-9. Next was the CX-5 that I’m reviewing here, which also arrived in 2012 as a 2013 model, followed up by the 2014 Mazda6 and same model year of Mazda3. The stragglers still to be updated include the subcompact Mazda2 hatchback, Mazda5 mini minivan, and the MX-5 roadster that’s so good looking (and will no doubt perform brilliantly) that it’ll be vying for premium sports car buyers.

There’s a little bit of MX-5 in every vehicle Mazda builds, or at least that’s what they want us to think. Certainly it’s difficult to compare a racetrack-capable rear-drive two-seat drop-top to a front- and all-wheel drive compact crossover SUV, but the Hiroshima-based automaker has worked hard to create and maintain a sporty image despite having to sell within more rudimentary auto segments in order to make a buck. The CX-5 is a good example of following this brand principle.

Before even sliding inside the driver’s seat the CX-5 captures the attention with tastefully elegant good looks. I think it’s especially attractive in Crystal White Pearl paint, the lightest shade offered especially effective in highlighting the darker elements of the upper and lower grilles, fog lamp surrounds, window pillars, hatch/spoiler buttresses, and lower body cladding, not to mention its various lighting elements that visually pop in contrast to the starkness of this unpigmented hue. White is the new silver, now the most popular “colour” on the road, and I must admit to liking this new trend, as it’s a very practical choice if repairs are ever needed, plus it’s especially nice to photograph.

Specific to the design, the big black grille of my tester gets a nice glossy rib across the top, while as part of the new Kodo philosophy a thin strip of chrome highlights the outline of the grille’s bottom half, extending upwards at each outermost point before melding into the headlamp clusters for a particularly artistic approach to industrial design. As much as I like the CX-5’s front end, my favorite angle of this crossover is from the rear where its elegantly shaped taillights join up with a sporty rooftop spoiler and a nice diffuser style bumper cap for a thoroughly stylish backside. A great looking set of 19-inch twin-five-spoke alloys wrapped in Toyo A23 225/55R19 tires round out the look. Most should find the CX-5 attractive, while I happen to like its gracefully subtle understatement more than most of its compact CUV rivals. After all, good design doesn’t need much embellishment to make it appealing.

Mazda follows the same principle inside, where the CX-5 is easy on the eyes, well made and amply filled with features. Like the exterior design its cabin won’t initially wow you with eye candy. The dash layout is pretty straightforward, featuring a nice sporty three-dial primary gauge package with a speedometer at centre, tachometer to the left and multi-information display on the right, while my GT tester’s leather-wrapped steering wheel is a sporty three-spoke design, the top two loaded with controls for audio, voice activation, phone, and cruise functions. Follow the soft-touch dash-top to the right and a full-colour touchscreen infotainment display is nestled into its own somewhat shielded indent, not quite as slick as the 3 GT’s dash-top mounted screen fitted with Mazda Connect graphics and functionality or its BMW iDrive-like HMI Controller on the lower console (much of this kit will be part of the package for 2016), but it was still effective with a user-friendly demeanor that should be easy enough for most to figure out. Mine include the TomTom navigation upgrade that was also pretty good, although the graphics aren’t quite as detailed as some rivals and screen is a bit on the small side, but the backup camera was a useful addition that gave a fairly clear picture out the back. Just below a set of vents is a three-dial dual-zone automatic climate control interface that’s about as easy to use as anyone can hope for, while just underneath are a couple of three-way heated seat buttons that unfortunately didn’t heat up anywhere near as hot as my partner and I like.

The lower console is once again a simple affair featuring a metallic trimmed shift lever finished off with a nice leather knob and stitched leatherette booth, the same treatment given to the handbrake lever, that last item a plausible sign of a car with performance intent. Sporty tones in mind, Mazda finished off my GT tester with a superb looking set of leather bucket seats boasting red contrast stitching, a racy upgrade that only had me wishing they’d applied the same thread to the steering wheel, shift knob and handbrake lever, but at least they added a single stitch of the red stuff along the door panel armrests front and rear, the latter to complement the matching red-stitched, leather-upholstered rear bench seat. The door uppers are hard plastic in the rear albeit soft surfaced up front, which is par for the course in the compact class. The GT sports a strip of black lacquered plastic across its instrument panel and another small panel of the inky glossed surfacing for the gear selector on the lower console. I like the CUV’s use of brushed metallic trim even better, which is applied in just the right amounts throughout the interior.

Mentioning my tester’s GT trim behooves me to go over its various features as well as those that get grandfathered up from lesser models. The leather upholstery, leather-wrapped steering wheel, shift knob and parking brake lever, automatic climate control, and 19-inch alloy rims that I already mentioned come standard with the GT, as does proximity-sensing Intelligent keyless entry, an auto-dimming rearview mirror with an integrated garage door opener, an eight-way powered driver’s seat with powered lumbar support, and a fabulous sounding nine-speaker Bose audio system.

Along with that long list of top-tier features the GT also includes a bevy of GS goodies including the heated front seats, backup camera and fog lights I spoke of earlier, as well as auto on/off headlights, rain-sensing wipers, a powered moonroof, a fold-down rear seat centre armrest with integrated cupholders, an alarm, blind-spot monitoring, and truly convenient 40/20/40 split-folding rear seatbacks that can be dropped via pull handles on the sidewalls of the cargo area, although unlike some in this class the headrests don’t automatically flip downward so you may have to pull the front seats forward to lay them flat. When they’re flat the CX-5 opens up to a sizable 1,852 litres (65.4 cubic feet) for 17 additional litres (0.6 more cubic feet) of cargo volume than the base model that only gets 60/40 split rear seatbacks, while both trims offer up 966 litres (34.1 cubic feet) of luggage space when all five seating positions are in use.

Features from the base GX model that get pulled up into GT trim include the various steering wheel-mounted functions I mentioned earlier, plus expected power windows and door locks, air conditioning, USB and aux jacks, a handy sunglasses holder in the overhead console, and powered and heated body-coloured side mirrors, with the unexpected inclusion of turn signals integrated into those mirror caps, a pushbutton ignition system and dynamic stability control.

A GX-sourced feature that I forgot to mention is its more powerful 2.5-litre, 16-valve, DOHC, direct-injection Skyactiv-G four-cylinder engine that replaces the base model’s 2.0-litre mill. Output increases from 155 to 184 while torque is up from 150 to 185 lb-ft resulting in a compact CUV with a surprising amount of get-up-and-go. The six-speed manual can’t be had with the larger engine, a reality that won’t likely cause a lot of fuss in the crossover class mostly because the six-speed Skyactiv-Drive Sport-mode automatic gearbox is so good. It’s devoid of the 3 GT’s paddles so it’s not quite as engaging during those rare but oh so enjoyable moments when coursing through a snaking stretch of two-lane roadway, but manual-mode can be actuated via the shift lever when required. What’s good about Mazda’s six-speed gearbox is its alertness to input. It shifts so quickly that it feels like an automated dual-clutch system yet so smoothly it could only be a traditional torque-converted autobox. In the GT the power goes down to all four wheels for added traction in all weather conditions, something I’d certainly want despite a slight increase in fuel consumption.

The 2015 CX-5 is rated at 9.0 L/100km in the city and 6.8 on the highway in base 2.0-litre, six-speed manual and FWD guise, while the same engine with the automatic gearbox gets an 8.9 city and 7.3 highway rating. Option out the 2.0-litre with AWD and that automatic-equipped model is claimed to achieve 9.3 city and 7.6 highway, whereas the larger 2.5-litre engine with front-wheel drive is good for an estimated 9.6 city and 7.4 highway. My top-line GT tester with the 2.5-litre engine and AWD was still extremely thrifty on fuel at a claimed 9.9 L/100km in the city and 7.9 on the highway, although you’ve got to go fairly easy on the throttle to eke out these numbers.

I’m not quite in old-man-with-hat territory, but I must admit to slowing down a lot as I’ve aged. Most of the time I had no trouble achieving the ratings noted above, but of course for testing purposes I had to push the CX-5 slightly over the posted limit and slam it through some of my favourite winding backroads. As you might expect the 1,600-plus kilo CUV had no problem getting up to speed, while passing power was always available exactly when needed. Its relative light curb weight aided controllability through the curves too, although much of the kudos need to be reserved for the CX-5’s rigid body structure and stable yet agile fully-independent coil-sprung front strut and multi-link rear suspensions with stabilizer bars at both ends, its electrically powered rack-and-pinion steering offering up fairly decent feel too. Where most compact competitors merely get you from A to B with adequate speed and composure, the CX-5 lives up to those inherent Mazda performance genes I inferred to earlier in this review, only making me wish they went all the way with this little ute for a truly sporting paddle-shift actuated transmission if not the availability of the wonderful six-speed manual in top-level GT trim like they did with the Mazda3 GT, but maybe such a sporting version of this little CUV wouldn’t find enough diehard performance enthusiasts to make it worthwhile financially.

If there ever was a compact crossover within the mainstream volume sector that could pull off a truly sport-tuned variant it would be Mazda’s CX-5, and not just because it’s GT model is so close already. More so, it’s the people who already gravitate to the brand because of its performance-oriented DNA and its sporty yet tasteful, minimalist design. The CX-5 is an excellent choice no matter the trim, whereas this top-line GT model is one of the best to drive in its class.
©(Copyright Canadian Auto Press)
Car Shopping Tools