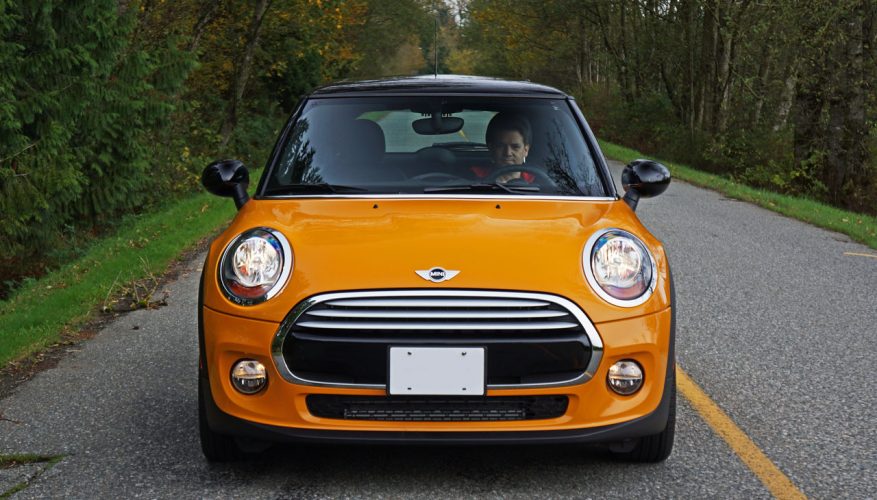 By: Trevor Hofmann
The entry-level Mini Cooper Hardtop was all-new last year, so there aren’t any significant changes for 2015 other than a new name, from the just-mentioned Hardtop designation to 3-Door.

That the Cooper 3-Door was previously dubbed Coupe (and Hatch, Hatchback or Hardtop depending on where it was being sold) before it became the Hardtop (here) is not a sign of any decision-making issues within the British brand’s Bracknell, Berkshire-based leadership (or the leadership of its Munich-based parent company for that matter), but more so the result of its ever-expanding model lineup. When Mini launched its two-seat Coupe in 2011 it had to completely abandon the Cooper Coupe name it had often used for the base hatchback model since the Bini (BMW/Mini) took the market by storm in 2001, whereas the most recent name change is necessary because of a new 5-Door hardtop being added to the lineup. Hence the new 2015 Mini Cooper 3-Door, which I’m sure you’ll agree, is a perfectly fitting name for the smaller hatchback.

I first tested the new 3-Door last year, in similar trim albeit nowhere near as brilliantly noticeable paint. My 2014 Cooper hatch was finished in comparatively conservative Midnight Black Metallic whereas this 2015 version sports an absolutely jaw-dropping Volcanic Orange, the second Mini I’ve had this year painted in this attention-getting hue.

Even more intriguing, where the 2014 model came outfitted with Mini’s optional six-speed automatic, an excellent autobox and even a tad faster than the base transmission off the line, my latest 2015 tester had a six-speed manual mixer between its front seats, the gearbox of choice for most hardcore driving enthusiasts. Despite the automatic’s slight edge off the line, the manual is the best way to get the most out Mini’s brilliant new 12-valve, direct-injection, twin-spool turbocharged 1.5-litre three-cylinder engine, shy one cylinder when compared to its predecessor yet much more capable just the same.

The new engine makes a surprisingly satisfying 134 horsepower and even more soul-stirring 162 lb-ft of front tire-shredding torque, up 13 horsepower and a mighty 44 lb-ft of torque over the old 2013 base Cooper. The result is a zero to 100km/h time of 7.9 seconds with the manual and 7.8 with the auto, plus a top speed of 210 km/h no matter the gearbox, quick enough to put a smile on most peoples’ faces, especially if they’re trading in a previous generation Cooper. While quick, the new three is also more refined than you might expect if experienced with three-cylinder engines, which are inherently off-balance. Mini smooths out what would otherwise be certain roughness at idle with a rotating countershaft, so it feels like a four no matter how low or high it’s revving. And it revs freely past 6,500 rpm, but peak torque comes on at a very low and extremely tractable 1,250 rpm for an engine that feels almost as strong as the outgoing Cooper S powerplant.

Unusual with an engine with significant power gains are improvements in efficiency, but the new turbocharged three in the Cooper 3-Door is good for a claimed 8.1 L/100km in the city, 5.9 on the highway and 7.1 combined with the manual, or 8.5 city, 6.3 highway and 7.5 with the auto. That’s a 19-percent improvement over the previous model (don’t let the new more realistic Natural Resources Canada five-cycle figures fool you into thinking the new car is harder on fuel), which is a very real have your cake and eat it too scenario. Part of its fuel economy gains can be attributed to a standard auto start-stop system that shuts the engine down when it would otherwise be idling. The system can be defeated via a chrome-clad toggle on the centre stack, but I liked its silence while stopped and always appreciate saving money while emitting much less pollution.

Additionally, Mini includes a standard Driving Modes selector for reducing emissions and consumption further, or alternatively for taking advantage of a two-lane stretch of serpentine tarmac. Just below the shifter, a sliding “SPORT << . >> GREEN” switch lets you set the driving experience to match your mood, and the results are exactly what I needed in each respect. When selecting Sport mode the throttle felt more alive and responsive while all the power came on instantly, whereas Green mode purposely made the Mini feel relaxed off the line as it minimized revs and maximized shift intervals to get the most from its 44-litre tank of premium.

Switched to Sport the Cooper 3-Door was as fun to drive as I remember last year’s car being, although my 2015 tester didn’t include the optional Dynamic Damper Control system the last one came with, although it did have a set of Hankook Optimo 205/45R17s in place of that car’s stock Hankook 195/55R16s. I’m not sure if having larger wheels and tires instead of active shocks balances things out equally, but this 3-Door took to the curves with the same verve as last year’s Hardtop, this new car’s 28-mm (1.1-inch) longer wheelbase plus 43-mm (1.7-inch) wider front and 33-mm (1.3-inch) wider rear tracks resulting in the usual go-kart like handling we all expect from Mini.

Despite its considerable growth in size (it’s 114 mm/4.5 inches longer than the old car) the new Cooper 3-Door is only 32 kilos (70.5 lbs) heavier than the outgoing manual-equipped model and just 28 kilograms (61.7 lbs) heavier when equipped with the automatic at 1,182 kg (2,606 lbs) and 1,213 kg (2,674 lbs) respectively. If the engineers had allowed it to get fat it would’ve hampered handling as well as eaten away at any performance and efficiency gains the new drivetrain offered, but rather Mini achieved the car’s lightweight goals through the extensive use of high-strength steel and lightweight alloy components.

Its newfound size does benefit interior roominess, a sizable bonus that’s easy to see from the inside. My tester’s airy cream-coloured roofliner helped make it feel larger and more open too, as did its optional dual-pane panoramic sunroof, but even with the $1,250 Essentials Package scratched off the sales contract (which would sadly remove the cool looking front and rear fogs as well as much-need heated front seats) and the dark anthracite roofliner added, your body would be able to immediately feel the difference in dimensions no matter where you’re seated. The biggest increase in volume can be found in cargo capacity, where there’s now 36.8 litres (1.3 cubic feet) more volume behind the rear seats for a total of 246 litres (8.7 cubic feet), whereas 1,076 litres (38 cubic feet) is available if you fold the rear seats forward. To put this increase in perspective, that’s 85 litres of extra space behind the rear seats when compared to the old Cooper hatch, and a gigantic (in Mini terms) 396 litres more when the seats are laid down. The new Mini’s hatch is larger for better access too, while the rear seatbacks are now split 60/40 instead of 50/50, allowing for more passenger/cargo flexibility.

People in mind, the new Mini is also a much more hospitable environment. The brand has always thought of itself as a purveyor of premium compacts, and while this has long been true when it comes to unique style, performance and features, some of its finishings weren’t always agreeable to the upper-crust crowd. Now there are soft synthetic surfaces in all the expected places, plus loads of chrome detailing to brighten up what would otherwise be a lot of top-grade black plastic.

Mini’s switchgear has long been high in quality and of course novel in a retrospective way, and both attributes carry forward into the new car. My favourite new detail is the standard bright red engine start/stop toggle, a more visible improvement over the tiny black button used on the previous generation, but I must admit to appreciating the new speedometer’s location nearly as much. It now sits directly ahead of the driver instead of on the centre stack, the big circular infotainment cluster in the middle of the dash now merely a design detail that pays tribute to days of yore. I’m sure some diehard Mini fans will quietly lament the change while others will march on the company’s headquarters screaming foul, but most of us who simply appreciate things to work more effectively will be glad they made the change. It sits in a pod-style package above the steering column along with a crescent moon-shaped tachometer on the left and big row of fuel gauge lights to the right. The latter is an unorthodox approach, but once you figure out that the tank is actually full when all the “warning” orange coloured lights are lit up you’ll be fine.

Other than the aforementioned $1,250 Essentials package, the no-cost addition of a black painted roof and side mirror caps, and a $740 set of 17-inch Cosmos 10-spoke silver painted alloys, my Cooper 3-Door was as close to base as any I’ve ever tested. This was no bad thing, as it’s important for me to test the kind of a car you can get for a starting price of $20,990 plus $2,295 for freight and pre-delivery prep. Along with the impressive interior finishings the well-equipped base Cooper 3-Door comes with a fabulously comfortable set of Carbon Black leatherette-covered bucket seats up front and more accommodating albeit still bucket-style seats in the rear, while a nice meaty leather-wrapped steering wheel is also standard, joined by a unique looking leather-wrapped shifter knob. Additional standard items include air conditioning, an AM/FM/MP3/WMA audio system with aux, USB and Bluetooth connectivity, steering wheel controls for phone, audio and cruise (the latter a premium-level dynamic cruise control system that will keep your 3-Door at a preset distance from the vehicle ahead via automatically braking and accelerating when necessary), heated power mirrors, powered windows and locks with remote access, heated window washer jets, driver and front passenger seat height adjustment, a Lights Package that adds cool blue LED ambient lighting tucked away in places like the interior door handle cutouts (a nice little surprise at night), and last but hardly least, Mini Excitement Lights.

Say what? Even automotive engineers want to have a little fun, so when redesigning the new Mini’s centre stack they decided to add a feature that could potentially make up for the lack of a centrally mounted speedometer, but I’m guessing only the grandkids of true Mini purists will appreciate it. Not a purist, I enjoyed it. When choosing one of the Driving Modes, the rim around the radio interface glows one of three colours: red for Sport, green for Green, and yellow for default. Likewise the lights will help you visually identify HVAC temperatures, blue for colder and red for warmer. Finally the disco lightshow also glows along with the audio system, showing red when increasing volume.

What don’t I like? Mini has done such a great job updating the Cooper 3-Door that it’s very difficult to find anything to complain about, although its need for pricier 91 octane gasoline will add about 10-percent to your fuel budget. Fortunately its superb fuel economy makes up for that in spades.

All in all, for just over $20k there’s little on the market that can compete with the Mini Cooper 3-Door’s iconic presence. It’s a car that gets noticed wherever you go, especially in Volcanic Orange, while it tends to put smiles on the faces of people passing by so often that it might change your overall perspective on Canadian’s satisfaction with life index (actually we rate very well in the OECD Better Life Index, but you wouldn’t know on a rainy day in Vancouver, amid the slushy highways and byways of Edmonton or Calgary, while catching sight of drivers peering through Toronto or Montreal’s flailing sleet, or plowing through Eastern Canada’s snow drifts while driving anything other than a Mini Cooper – all tasks that any Mini will handle with ease if shod with the right tires). Of course, the little 3-Door will likely put a big grin on your face each time you get behind the wheel too, and how can anyone possibly put a price on happiness? It’s worth every penny.
©(Copyright Canadian Auto Press)
Car Shopping Tools