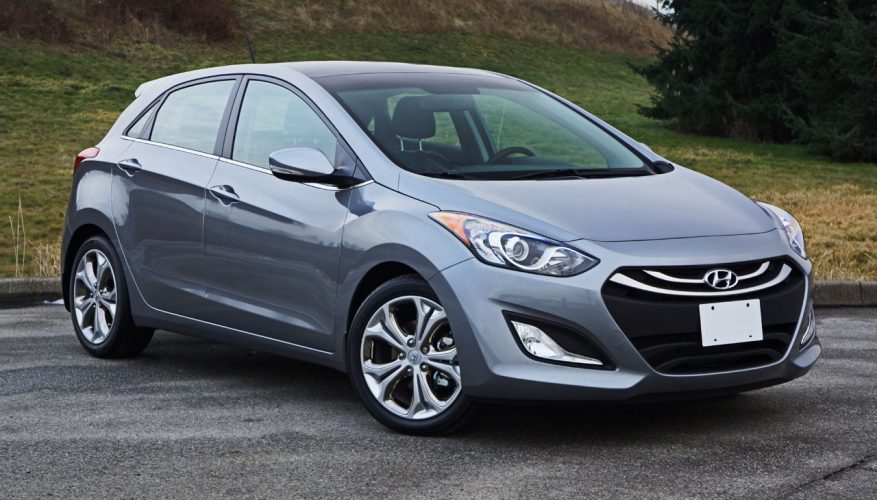 By: Trevor Hofmann
If I had to attribute one element to Hyundai’s impressive rise up through the sales charts over the last half decade I’d choose styling. Of course, there’s been a great deal more than that. From its impressive interiors filled with more features than most competitors, advanced drivetrains that leave the majority of rivals in clouds of archaic dust, improvements in build quality, reliability and fuel economy, to a Hyundai attribute that’s been around since day one, value, the single detail that’s caused more people to sit up and pay attention to the Korean automaker’s cars is how they look.

Consider this Elantra GT. Nowhere near as popular as the four-door Elantra sedan here in North America yet easily outselling the equally attractive yet not as functional Elantra Coupe, the GT is my personal favourite. Like many Canadians I have a thing for five-door hatchbacks and wagons. The GT, which is the spiritual successor to the old second-generation Elantra Wagon, third-generation Elantra Hatchback and fourth-generation Elantra Touring, became even more rakishly sporty in its fifth-generation. The GT name, incidentally, has been in the Elantra lineup since the first generation, but this is the first time Hyundai has used it for a separate model rather than just an Elantra trim level.

History behind us, much of the current GT’s good looks are pulled from its four-door sedan sibling, at least when we’re talking about the swoopy sedan’s design impetus. The GT’s trapezoidal grille is the same shape, yet it’s a blacked out version other than two unique chromed slats curving across its uppermost portion. An opposite set of twinned slats sits within the lower grille opening, but finished in matte black, while a matte black bumper cap bisects the two. Next to the grille, Hyundai’s trademark headlamps are especially detailed in this model, while the brand’s edgy shark’s tooth fog lamps look as sporty as ever. Follow the GT’s sculpted lines rearward and a gorgeous set of twinned five-spoke silver painted and chromed adorned alloy wheels pull eyeballs, their 215/45R17 Hankook Optimo tires framing them nicely. The GT’s steeply raked hatchback-infused rear styling gets finished off with a sporty set of organically shaped taillights that are even more dramatically penned than the shapely pair found on the sedan. From this rear angle it’s also easy to see the elegant character line that circles its way over the front fender before sweeping upwards through both doors and rounding off over the rear wheel cutout as it meets up with the back bumper. A little time spent looking at the car shows that Hyundai named its current design language appropriately: fluidic sculpture.

I like that Hyundai eschews the popular belief that a sports model should be highlighted in matte black instead of chrome – that notion is so passé. This GT has chrome applied to the grille and wheels as mentioned, as well as within the headlight clusters, surrounding the fog lamps, along the lower portion of the windows, and on the badging front to back. It’s a sports model with a little bling, which is a nice change from the often starkly embellished European designs.

Similar can be said of the interior, where a soft-touch dash-top and pliable front and rear door uppers give the car a premium look and feel plus sound absorptive qualities. A nice, thick, comfortably shaped leather-wrapped steering wheel looks the part too, as does a leather-enhanced shift knob, while stitched leather-like armrests on the doors, plus a padded pleather armrest over the console bin add comfort and style. Likewise, attractive satin-silver surfacing brightens up the multifunction steering wheel and vent surrounds, and then flows down each side of the centre stack in unique buttress-style floating pillars before meeting up with the shifter, which gets yet more satin-silver trim as do the cupholders just behind. The door panels are attractively accented with the satin silver treatment to, as are the door handles.

The Elantra GT’s display audio system gets a large full-colour touchscreen after graduating up to SE Tech trim (the non-Tech enhanced SE model has been discontinued for 2015). This is a state-of-the-electronic-art seven-inch infotainment setup with navigation and a backup camera system included, plus AM/FM/SiriusXM/CD/MP3 six-speaker audio with USB and aux inputs, as well as Bluetooth hands-free, while much of the items just noted can be operated via steering wheel controls. Not all of this gear is exclusive to the SE Tech however, some even standard on the base car whereas other items are made available on the second-rung GL.

Additional gear that’s grandfathered up from lower trims to this SE Tech model include a leather-wrapped steering wheel and shift knob, eight-way powered front seats, extensions for the sun visors plus illuminated vanity mirrors, a windshield sunshade band, a panoramic glass sunroof, a handy sectioned-off storage compartment under the cargo floor, and front fog lamps from GLS trim; automatic headlights, steering wheel controls, Bluetooth hands-free, satellite radio, and heated front seats from the GL; and lastly an extensive list of high-grade equipment from the base L model including tilt and telescopic steering, heated power-adjustable side mirrors, air conditioning, driver’s seat height adjustment, the aforementioned audio system with its aux and USB jacks, a rear spoiler, and Hyundai’s class exclusive Driver Selectable Steering (DSS) system, plus of course a full suite of safety features including four-wheel discs with ABS and electronic brake-force distribution, Vehicle Stability Management with stability and traction control, and seven airbags including one for the driver’s knees.

The Elantra GT’s standard features set is impressive for a car that starts at only $18,449 plus freight, but it’s items like the standard knee-blocker airbag and DSS, the latter previously not available in base trim, which truly set it apart from the class average. DSS lets you to customize your driving experience between Sport, Normal and Comfort steering modes, the kind of feature normally only offered by premium brands costing at least twice as much as this little compact. All you need to do is press a steering wheel-mounted button to add more steering “weight” in Sport mode or more assist in Comfort. I found Comfort a bit too light-weighted for my tastes, but I can see how it might prove useful over rougher roads where the steering might otherwise get jostled from someone’s grip, while some folks might like it for parking. I found the Sport setting ideal for my driving style, which is European influenced (hence my last name). To have such a system available on the standard equipment list in a mainstream compact five door is unusual indeed.

Another pleasant surprise is the GT’s standard powertrain, a direct injection-enhanced 2.0-litre four-cylinder with dual continuously variable valve timing that’s good for a stimulating 173 horsepower and 154 lb-ft of torque. This is one of the better engines in the compact class, and a wonderful mate to the GT’s standard short-throw six-speed manual, a fabulous little mixer that’s truly fun to row through the gears.

But this last point brings up my only complaint about the Elantra GT; you can’t get the six-speed manual with the sportiest, highest-tech version of this rakish five-door model, or with GLS trim for that matter. Rather, Hyundai’s six-speed automatic with Shiftronic manual mode is the only transmission offered with the car’s two priciest trims. Don’t get me wrong as this is an excellent autobox, shifting very quickly and, thanks to manual mode, allowing for a fair bit of driver engagement, but on that last point it’s not as involving as a manual gearbox and therefore not as sporty. Of note, Mazda corrected this same mistake with its 3 GT for 2015 (a sporty five-door compact that targets the same market), having dropped its six-speed manual last year and now adding it back to the lineup for 2015 after customer (and journalist) complaints. If Hyundai wants to be taken more seriously by the sport tuner market and by diehard performance drivers (the types who tend to spend more for top-tier trims), its excellent six-speed manual should be available across the line, or if that’s not financially feasible due to low take-rates in mid-grade trim, it should at least be made available for this sporty SE Tech model, if for appearances alone.

The manual is a tad thriftier than the automatic too, at a claimed 9.8 L/100km in the city, 6.9 on the highway and 8.5 combined, compared to the auto’s rating of 9.7 city, 7.2 highway and 8.6 combined, although if you spend more of your time in the city the automatic wins the efficiency competition. Take note that these numbers reflect Natural Resources Canada’s new five-cycle testing method and not last year’s less accurate two-cycle process, so you’ve got a better chance of actually matching the estimated figures.

The figures I like best about the GT over its similarly powered Elantra sedan sibling are cargo carrying capacities. Compared to the four-door’s ample trunk space of 420 litres, the five-door GT boasts 651 litres behind the 60/40-split second row seatbacks and a commodious total of 1,444 litres when those seats are lowered.

This is one of the most obvious reasons to choose the Elantra GT over the more conventional sedan, but for many Canadians it’ll be styling. The choice is yours, of course, but either way Hyundai’s compact model is one of the best in its segment and, like all Hyundai models, a leader in value. You can’t go wrong with either.
©(Copyright Canadian Auto Press)
Car Shopping Tools