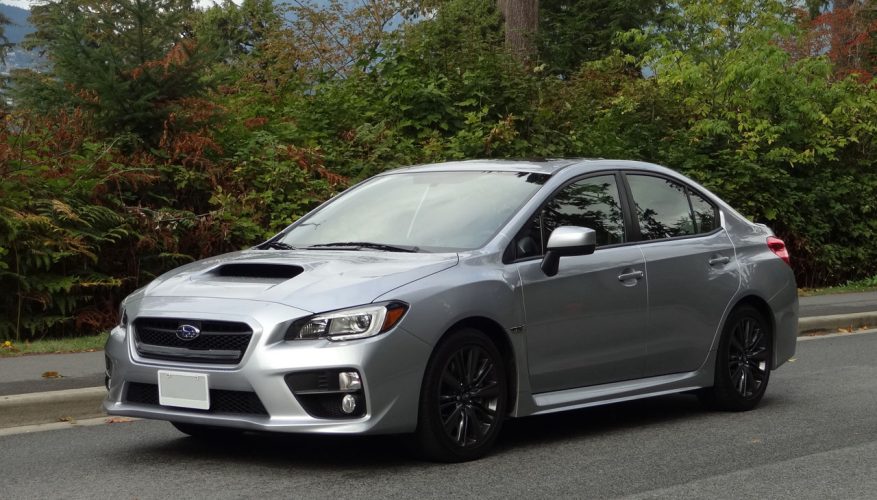 By: Simon Hill
Redesigned for the 2015 model year, Subaru’s performance-oriented WRX compact sedan has pulled away from its Impreza roots to become a separate model in its own right, with a more powerfully efficient new engine and a pair of new transmissions.

While the old WRX was marketed as a high-performance version of the Impreza and as such was sold only with a five-speed manual transmission, the new WRX has dropped the Impreza name entirely and now offers either a six-speed manual gearbox or a CVT automatic. The good news here is that the slingshot acceleration and grippy, road-hugging handling of the WRX can now be enjoyed by a much wider audience.

Naturally Subaru wanted to showcase its newly available automatic-equipped WRX, and therefore set me up with an Ice Silver Metallic WRX Sport model fitted with the Sport Lineartronic CVT.

Styling-wise, the WRX is still based on the Impreza sedan, but for 2015 it moves further away from its bread-and-butter sibling than it has in the past. The body shell and overall silhouette are shared between the two models, but the WRX gets its own treatment up front with different fenders, hood, fascia and grille, while the rear fenders are likewise re-sculpted with unique lower cladding and subtle changes to the rear door skins to tie everything together. Overall, the look strikes a nice balance between aggressive and incognito: The big hood scoop, bulging fenders and dramatic-looking rocker panels will leave your friends and neighbours in no doubt that this car means business, but unlike the higher-spec WRX STI there’s no shouty rear wing or blingy race wheels to attract unwanted attention from the local constabulary.

Whichever transmission you select, the 2015 WRX replaces the previous version’s 265-horsepower 2.5-litre boxer engine with a smaller but more powerful 2.0-litre turbocharged four-cylinder boxer that develops an impressive 268 horsepower and 258 lb-ft of torque. The real magic of this engine is the fact that the torque comes on early and stays near its peak across a broad rev range. Combined with a quick-spooling turbocharger, this means the engine provides near instantaneous response, and at full chat the WRX will accelerate from 0-100km/h in just under six seconds regardless of which transmission is installed. Fuel economy for the new engine, using the new five-cycle test method, is rated at 9.8 / 7.0 L/100km (city/highway) with the CVT, although thanks to generous applications of throttle during my week with the car I managed to use somewhat more than that, averaging 12.5 L/100km in mostly city driving.

The CVT automatic offers three driving modes: I, S and S#. In I mode (which stands for Intelligent) it operates as a traditional CVT transmission, varying the gear ratio to keep the engine "on tap" at the optimum revs for fuel economy and power. S mode (for Sport) provides six pre-programmed virtual gears, and you can either shift through these gears using the steering-wheel mounted paddle shifters or let the transmission do its thing. In practice, I found that S mode felt much like I mode at lower revs, with the programmed shifts only becoming noticeable at higher throttle settings. S# mode (for Sport Sharp) provides eight preprogrammed virtual gears with remarkably crisp shifting intervals. My one complaint is that the transmission takes a moment to hook up off the line, so there’s a tendency to push deeper into the throttle and then suddenly take off like a scalded cat.

Speaking of cat-like tendencies, the WRX grips in the corners like a cat on carpet thanks to its low centre of gravity and all-wheel drive system with active torque vectoring. This system measures lateral g-forces and applies braking force to the inside front wheel to virtually eliminate understeer and help the car bite into the corner. The WRX uses MacPherson struts up front and a double-wishbone setup in the back, and for 2015 Subaru has stiffened the car’s frame by 40 percent, increased the spring rates, increased the size of the sway bars and installed more rigid suspension bushings. The net effect is that the WRX feels more responsive and connected to the road than ever before, with 16 percent less body roll in corners and seven percent more grip, backed up by big, confidence-inspiring brakes. The downside is that the ride is decidedly firm, but then those looking for plushness over performance should probably be looking at the Impreza.

One area in which the WRX has long received criticism is the interior, and Subaru has addressed this in the redesigned 2015 WRX with updated styling and improved materials that together create a much more refined environment. There’s good use of soft-touch materials, with soft-skinned door uppers front and rear and a soft-top dash and instrument binnacle. Genuine-looking carbon fibre trim and red contrast stitching on the seats and leather-wrapped steering wheel hint at the car’s performance intent.

Passenger space and trunk room have been slightly improved over the previous version, and I found both to be excellent for a compact car. At 5-foot-11 I could set the supportive cloth-upholstered driver’s seat to my preferred position and still have lots of room to sit comfortably behind myself in the rear seat. One area in which Subaru deserves a special shout-out is the WRX’s excellent outward sightlines, which are far less encumbered than most rivals thanks to carefully designed roof pillars (the careful design extends to the rest of the structure, which earns an IIHS Top Safety Pick award with good crash ratings across the board). The trunk offers 340 litres of space and 60/40 split-folding seatbacks for easy carriage of skis or other unwieldy items.

While the interior is much better than before, it still leaves some room for improvement: It’s not as quiet as one might hope, especially at highway speeds where a fair bit of tire and wind noise intrude into the cabin. Around town the brappy quad-tip sport exhaust takes over, thrumming rather loudly at idle. Combined with a downpour of rain beating against the windshield, the ambient noise inside the cabin made it impossible for the WRX’s voice command system to understand what I was saying. Trying to dial a number on my Bluetooth-connected phone while driving along a suburban causeway turned into a comedy routine, with the system constantly ignoring digits or adding extraneous ones – eventually I gave up and pulled over to dial manually. Lastly the base stereo is, as my driving notes put it, "a bit weak-sauce" – thin sounding and muddy, with poor bass response. There’s an available nine-speaker 440-watt Harman/Kardon system, but it only comes with the top-of-the-range Sport-tech model.

The Subaru WRX is available in three trim levels: base, Sport and Sport-tech (the higher-spec WRX STI is also available in the same three trim levels). The base WRX starts at $31,645 including its $1,650 destination fee and comes well equipped with 17-inch alloys, automatic climate control, a leather-wrapped sport steering wheel, aluminum pedals, a colour multifunction display, heated front seats, a rearview camera, and a six-speaker AM/FM/XM/CD audio system with USB input and Bluetooth connectivity. The Sport model, as tested, starts at $34,145 destination in and adds an eight-way powered driver’s seat (instead of six-way manual adjustment), a power sunroof, automatic LED headlights, fog lights, trunk lid spoiler, and welcome lighting. The Sport-tech model starts at $37,145 destination in and ups the ante with the nine-speaker Harmon/Kardon audio system just mentioned, voice-activated GPS navigation within a 6.1-inch touchscreen display, proximity entry with pushbutton start, and leather upholstery.

No matter how you outfit it, the WRX offers an immensely engaging driving experience with track-worthy performance that’ll put many more expensive cars to shame. And it’ll do it all without sacrificing the practical qualities of its bread-and-butter Impreza stable mate. Ultimately this is what really makes the WRX stand out, especially when equipped with the Lineartronic automatic – driven casually around town it’s a pleasant and useful conveyance with a sporty edge, but bottled up inside is a sharply-reflexed performance machine, a race car concealed within a family sedan. While the VW Golf GTI and Ford Focus ST offer similar blends of performance and practicality, neither delivers Subaru’s all-wheel drive capabilities, leaving the WRX with few real peers.