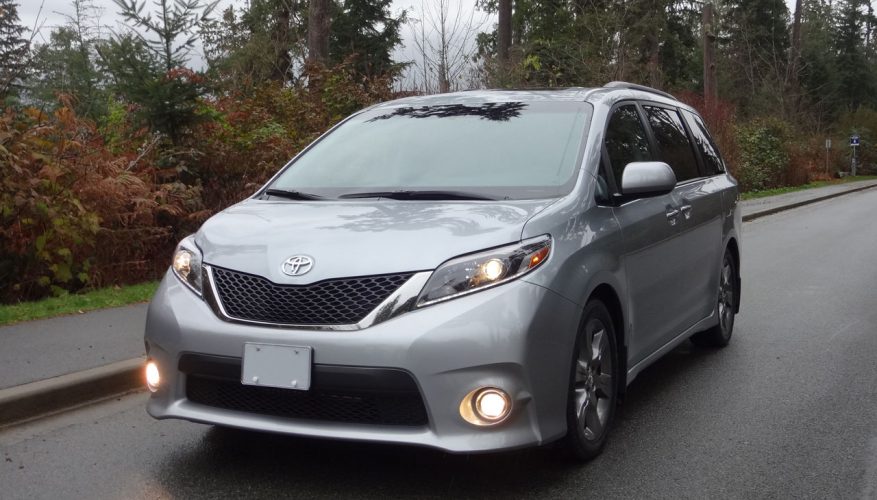 By: Simon Hill
While minivans aren’t the red-hot commodity they were a decade or two back, the segment remains both important and hugely competitive. Dodge, Chrysler, Toyota and Honda sold 83,779 minivans between them in Canada during 2014, and over half a million vans in the US. In both markets, Toyota’s Sienna has been in a virtual dead heat for second place against Honda’s Odyssey, while in the US it’s almost a four-way tie for first (Dodge’s Grand Caravan is the runaway leader in Canada, but the model is slated to be retired in 2016). With Kia recently releasing a new Sedona, things look to heat up even further going forward.

To help the Sienna retain an edge in this evolving marketplace, Toyota has refreshed its popular people-hauler with some key changes for 2015, while retaining its traditional strengths including spacious and comfortable seating, easy access, a robust powertrain, available all-wheel drive and reasonable pricing.

Key amongst the changes is an all-new interior, one area where the Sienna has lost points to its rivals in the past. The 2015 Sienna gets a completely restyled dash, with upgraded interior materials, a new control layout and nicer trim. Hidden from sight, but immediately apparent when you carve the Sienna into a corner, Toyota has also revised the suspension and stiffened up its body structure to provide more assured handling. Outside, the changes are subtler and include an updated grille and taillights.

My test vehicle was a front-wheel drive SE model fitted with a comprehensive optional Technology Package. The SE trim lends real credence to the concept of a sporty minivan thanks to its big fender-filling 19-inch five-spoke alloy wheels, unique mesh grille, and aggressively styled SE-specific front and rear fascias, which combine to give the van a hunkered-down look. The SE also gets LED taillights and front running lights, fog lights, smoked headlight surrounds, unique sport gauges, leather upholstery and a few other bits and pieces, while the Technology Package adds such things as a power moonroof, navigation system, proximity entry with pushbutton start, blind spot monitoring with cross traffic alert, a wide-screen rear entertainment system and theft alarm.

In terms of ride and handling the Sienna has always been competent, and by stiffening the van’s underpinnings and tweaking the suspension Toyota has given the 2015 model an even more assured feel. On top of this the SE has a sport-tuned suspension and the bigger alloys I mentioned earlier, giving it handling chops that aren’t merely on par with the average crossover but actually better than many, all while maintaining a comfortably compliant ride. The only downside is that the van’s low ride height gives you less ground clearance than you might expect from such a big vehicle, resulting in me noisily (but harmlessly) scraping the passenger’s side rear mud flap across the curb when pulling into a driveway.

Safety-wise the Sienna gets traction control, stability control, ABS brakes, active head restraints and a comprehensive array of airbags, and its structure is robust enough to garner "Good" ratings in most IIHS crash tests, and an "Acceptable" rating in the challenging new small overlap front crash test. Combined with the available driver-assist technologies this earns the Sienna an IIHS Top Safety Pick+ award.

Inside, the 2015 Sienna is as functional as ever and now a whole lot nicer. The new dash design follows the path already established by the Camry, Corolla and RAV4, which means there’s a padded leather-look dash panel with contrast stitching, pinstriped trim (woodgrain in Limited and XLE models), and a big seven-inch touchscreen display providing central control of all the infotainment functions. The front door panels have padded inserts and soft-skinned rigid uppers, while the back doors get rugged, well-matched rigid plastic uppers. Cabin storage is taken care of thanks to a floor mounted tray and a big console bin (my only remark with this being that its large size rather begs some sort of organizer inside, because as it is I can imagine it becoming a bit of a disorganized mess). Overall the look is modern and sophisticated, and a big step up from the previous interior.

Ergonomically, all the controls are laid out in a logical manner, and I found the infotainment interface to be reasonably intuitive. All Siennas now get three-zone automatic climate control, with a separate small climate control display and individual temperature control knobs for each zone (the control for the rear is smaller and centrally mounted – all very logical). Back seat passengers can also take matters into their own hands thanks to a local climate control panel in the left-side roof panel.

The front seats are roomy and plenty comfortable, with eight-way power adjustments for the driver in all but the base van (it gets six-way manual adjustment), and four-way adjustment for the passenger. In the second row the removable centre seat is actually much more comfortable than it looks, while the outboard seats are downright cushy, and both sides of the centre row can slide fore and aft to share legroom if necessary with the third row. That said sharing legroom shouldn’t be a problem – at 5-foot-11 I could set the second row with gobs of legroom to spare and still sit comfortably in the third row. Slide-out cupholders, a 120-volt outlet and RCA-style video inputs for the rear entertainment system means that older kids can drink their pop and play video games, or of course you can pop in a DVD and let them watch a movie. And if they can’t agree on their entertainment choice, Toyota’s 16.4-inch wide rear display incorporates a split screen so that two programs to be played simultaneously.

Passengers in the third row get a couple of cupholders per side, a pair of headphone jacks, closable cubbies for holding snacks or what-have-you, and pop-open vent windows. If they start misbehaving back there (or if you want to point out some passing point of interest) there’s no need to shout, as Toyota has equipped the Sienna with a "Driver Easy Speak" system that when activated via the infotainment screen picks up the driver’s voice and broadcasts it through the rear speakers. Access to the third row is reasonably easy thanks to the second-row seats’ ability to clamshell forward, but I found that they are fairly heavy and awkward to move back into position, so if you’re loading a van-full of six-year olds you’ll probably have to help out with this task. The third-row seats are easy to stow and deploy when standing at the rear hatch, but less so from within the van.

Cargo space behind the third row is a usable 1,107 litres, which rises to 2,466 litres with the third row stowed. When you need to haul a lot of stuff you can either clamshell the second-row seats forward to get them mostly out of the way, or you can remove them entirely, presuming you’re able to manhandle them around and have somewhere to put them. When totally extracted maximum cargo space is 4,248 litres.

Pricing for the base front-wheel drive Sienna starts at $32,380 (including the $1,690 destination fee) and tops out with the Limited at $47,565, destination in. The base van includes three-zone automatic climate control, cloth upholstery, AM/FM/CD/MP3 audio with the aforementioned seven-inch display, Bluetooth connectivity, backup camera, power locks and windows, tilt and telescoping steering, cruise control, keyless entry, 12-volt power outlet, 17-inch alloy wheels, and more. Higher trim levels add features such as leather upholstery, a leather-wrapped steering wheel, upgraded audio with satellite radio, power sliding doors, a power tailgate, proximity entry with pushbutton start, an auto-dimming mirror, backup sensors, larger wheels, moonroof, rain-sensing wipers, and so on. My SE test van carried a base price of $39,185 destination in, plus $5,355 for the Technology Package, bringing its as-tested price to $44,540.

Whichever trim you choose the Sienna offers a solid powertrain, good road manners, a spacious cabin and practical seating plan, all wrapped up in a well-executed overall package. My SE test van impressed me with its genuinely sporty appearance modifications backed up by effective wheel and suspension upgrades, while the Technology Package, although pricey, offers good value with a wide array of the most desirable optional equipment. With its well-rounded character and competitive pricing the Sienna always was a solid minivan value, and the changes for 2015, especially the updated interior, have only made it better.