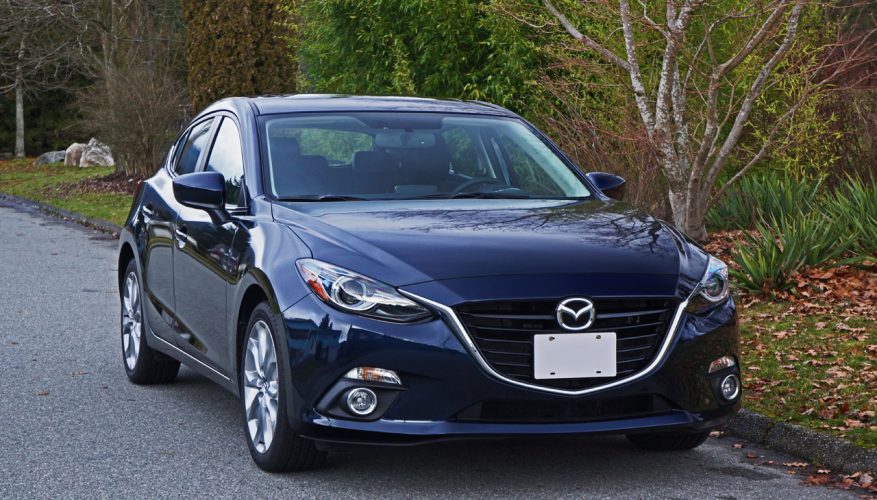 By: Trevor Hofmann
Mazda answered many a pundit’s pointed question as well as myriad performance enthusiasts’ prayers by adding a manual transmission to its revered 3 GT this year.

Yes, strange that a manual gearbox wasn’t part of the 2014 Mazda3 GT’s standard package in the first place, this being the sportiest trim level currently available for one of the zoomiest cars it produces. The powers that be at Zoom-Zoom nation were evidently not congruent with their performance-oriented brand principles when they made this decision, but now they’ve righted this wrong and all is forgiven. And please don’t misunderstand my point: They did include standard paddle-shifters with their impressive Skyactiv-Drive six-speed automatic last year and still do, showing that the brand’s performance principles were at least being adhered to in some respects, but Mazda’s superb short-throw Skyactiv-MT six-speed manual transmission deserved to be next to GT driver’s seat too.

As you can imagine, Mazda wanted to get the word out about its repentance and therefore added a 2015 Mazda3 GT MT to its fleet as soon as one was made available, and yours truly immediately booked it, tested it, had it photographed so you can see proof of the gearbox mods yourself, and now, just a week later is reporting my findings to you, dear reader. Of course, as you might expect, replacing the autobox with Mazda’s brilliant little lightweight shifter makes a world of difference to the car’s performance. The Mazda3 was already made substantially lighter last year, not to mention wider with a longer wheelbase, lower and arguably much better looking, while the five-door Sport model chosen for this test car made the experience all the more enjoyable, at least when it comes to visuals.

You can get the GT in four-door sedan or five-door Sport guise, both standard with the six-speed manual or optional with the paddle-shift actuated six-speed auto. I prefer the Sport body style, although only slightly more so than its sleek saloon shape, and tend to lean towards cars with hatchbacks instead of trunks due to ease of hauling taller cargo. Then again I once had my laptop stolen out of an SUV despite having its rear tonneau cover hiding my belongings in back, so there’s something to be said for the security of a trunk. I’ll leave such decisions up to your tastes and lifestyle however, and only say that it’s nice Mazda has given us the choice.

The choice of gearboxes is even nicer. If there’s a better six-speed manual on the market I don’t know what it is. I’d like to spend an hour (or three) on Mazda Laguna Seca Raceway (which I’ve done on numerous occasions – thank you WAJ) to see how this DIY gearbox would perform against the six-speed manual standard-bearer in Honda’s Civic Si; the 11-turn, 3.602-km (2.238-mile) ribbon of twisting, undulating, off-camber, vertically challenging paved nirvana an ideal location for a sport compact shootout, but no such luck this time around. Rather, I took it to the hills around my part of the world. Unfortunately, public roads were the only course of action available for testing the 3 GT’s mettle, being that no worthwhile racetracks can be found within a 13-hour drive of my home, within Canada at least, and closest ones in the U.S. (in Washington state and neighbouring Oregon) are a fair distance at best.

You can learn a lot about a car’s driving dynamics on a decent stretch of winding roadway, even without breaking the law (very much). There’s no Mazdaspeed3 version of the new model quite yet, so I didn’t experience Civic Si trouncing straight-line performance, but the 3 GT is masterful at making curved roads seem straight. It comes standard with a lightweight set of 18-inch 10-spoke rims wrapped in 215/45R18 Dunlop SP Sport 5000 all-season rubber, a nice compromise tire that handled well in the dry as well as in the rain (although customer reviews are negative on their ability in snow and overall longevity), the 3 Sport GT delivering a level of point and shoot confidence that few in the compact class can even come close to approaching let alone matching.

The 16-valve, DOHC 2.5-litre Skyactiv-G four-cylinder under the hood puts 184 horsepower at 5,700 rpm and 185 lb-ft of torque at 3,250 rpm down to the front tires, ample for spirited takeoff from standstill and more than enough for quick passing on a two-laner, and while its fuel economy isn’t as economical as with the 3’s base 2.0-litre four it’s still impressive at a claimed 9.3 L/100km city and 6.4 highway with the manual or an even thriftier 8.4 city and 6.1 highway with the automatic. If you want to cheat the pump even further you can opt for Mazda’s innovative i-ELOOP regenerative braking system, albeit only with the automatic GT, but with a rating that only ekes out an extra 0.2 L/100km city/highway at 8.2 and 5.9 respectively it’s going to take a long time to pay off the extra $4,000 required to have it added on.

Then again you get a lot more than just the i-ELOOP regenerative braking system for that money, in fact it’s more of an icing on the cake issue when you start adding up all the features that come with the two requisite packages. i-ELOOP comes as part of the $2,500 Technology Package that also boasts automated high-beam assist, adaptive headlights with auto-leveling, blind-spot monitoring with rear cross traffic alert, lane departure warning, Smart City brake support, and satellite radio, but choosing the Technology Package also necessitates the addition of the Luxury Package, which for $1,500 and adds leather upholstery with stylish red stitching to match the red stitching on the leather-wrapped steering wheel, the handbrake lever and all three front leatherette-covered armrests, plus leatherette door inserts, a six-way powered driver’s seat with lumbar support, and an auto-dimming rearview mirror with an integrated garage door opener. So as you can see, opting for i-ELOOP regenerative brakes just to save money on fuel isn’t wise, but it’s a nice add-on for those who want to raise their Mazda3 experience to near-premium levels of features and refinement. Of course, choosing this option would mean that your 3 GT would be fitted with an automatic transmission, and while this has its advantages in stop-and-go traffic it was never the impetus for this review.

So far all of this info has been good and it’s quite possible that you’re all smiles about the idea of getting your hands on a sporty compact with near-premium levels of luxury and equipment, so I’m a bit concerned that the rest of the 3 GT MT story will leave you somewhat perplexed about why Mazda has still decided to reward its automatic buyers more than its manual fans. That Technology Package, which sounds so good even without the i-ELOOP system, isn’t available to Mazda3 GT buyers want to stick with the stick shift. Rather, all that’s on the menu is the Luxury Package, exactly how Mazda outfitted my Deep Crystal Blue Mica painted tester. Do they know something I don’t about buyers who prefer manuals? Don’t these folks like automated high-beam assist, adaptive headlights with auto-leveling, blind-spot monitoring with rear cross traffic alert, lane departure warning, Smart City brake support, or satellite radio? I can’t answer that question, but I’m sure you can.

I suppose the silver lining in this news is that your fully-loaded Mazda3 GT will cost $2,500 less than the fully-loaded version with the autobox (the automatic is a no-cost option), which means you’ll have more money to buy accessories like the $1,990 aero kit, $255 metal pedal set, $544 roof rack and/or $245 ski/snowboard carrier, or you can just put the money into oil stocks (they’re low right now).

The 2015 Mazda3 GT sedan with the six-speed manual starts at $25,995 plus $1,695 for freight and pre-delivery prep, while a 3 Sport GT manual can be had for $26,995 plus freight, while adding the Luxury package moves that price up to $27,495 and $28,495 respectively, and simultaneously moves you into a compact car that is easily capable of competing with many premium-badged compact models. In fact, its beautifully finished soft-touch dash-top and front door uppers, great looking full-colour primary gauges, cool dash-mounted head-up display system, BMW 3 Series-style infotainment display with superb graphics and simple easy actuation via an xDrive-style rotating knob on the lower console, dual-zone climate control interface, fabulously comfortable and supportive leather-clad sport seats, comfortable and commodious interior and so much more makes it a nicer, more alluring and arguably better looking compact than many that wear fancier and pricier brand names. Go ahead and put the Mazda3 GT up against an Acura ILX, Buick Verano or Mercedes-Benz CLA and you’ll see what I mean.

Now that all this Mazda3 GT goodness is available with such a brilliantly capable six-speed manual gearbox it’ll be difficult not to become a true zoom-zoom devotee.
©(Copyright Canadian Auto Press)
Car Shopping Tools