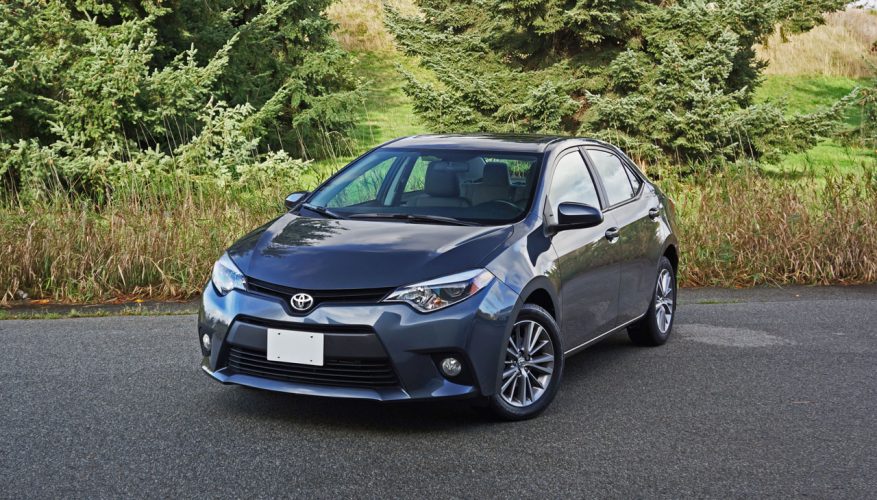 By: Trevor Hofmann
Have you seen the new Corolla? No doubt you have, because Corollas are just about everywhere, but then again it’s so good looking you might not realize that the attractive four-door passing by is actually Toyota’s legendary compact sedan.

The Corolla has always been a superb car in search of styling to match its capability, but last year the ultimately dependable four-door doffed its light blue button-up shirt, beige corduroys and brown “dress” sneakers and instead put on a white button-up shirt under a thin grey sweater, slim-fit blazer and identically coloured jean-like dress pants adorned with a simple silver-buckled black leather belt, and black leather loafers. Yes, the Corolla went from Mark Zuckerberg to Justin Timberlake in an instant. From the ultimately style-less to 2014’s best dressed list.

It remains just as fashionable for 2015, my most recent Corolla tester suited up in tasteful Slate Metallic and well-equipped LE trim, plus this model’s Upgrade Package that adds a sporty yet functional set of front fog lamps and stylish 16-inch alloys all-round, not to mention a leather-wrapped steering wheel, automatic climate control (new to the LE Upgrade Package this year), and a powered tilt and slide glass sunroof overhead. All of this goodness gets added to a car that’s already endowed with a premium-like full-colour, high-resolution 6.1-inch touchscreen infotainment system complete with a backup camera, six-speaker AM/FM/CD/MP3/WMA stereo, steering wheel-mounted audio, cruise and Bluetooth controls, two-way heated front seats, air conditioning, an Eco driving indicator, and (are you sitting down?) luxury-class LED headlamps, all standard with the $19,785 Corolla LE. The Upgrade Package costs $1,750 resulting in a total of $21,535, while all Corollas require payment of a freight and pre-delivery preparation charge that totals $1,520.

I would be remiss not to mention that you can get into a base Corolla CE for just $15,995 plus freight, that you can add air conditioning to that model for $1,695, or pay another $770 for an automatic transmission and have A/C thrown in. I’d also be in your debt if I didn’t tell you that the sporty Corolla S can be had for $360 less than the Corolla LE, and while it gets a completely unique and more menacing looking front fascia that includes standard fogs, it isn’t equipped quite as well as the LE. Still, it gets a standard six-speed manual that’s great fun for performance enthusiasts and can be upgraded with 17-inch rims and rear discs, kitted out with a Technology Package complete with proximity-sensing access and pushbutton ignition, navigation, automatic climate control, a powered driver’s seat and much more, or dressed up in 50th Anniversary Special Edition trim.

I mentioned some of the features earlier, but the new Corolla is much more than the sum of its parts. The upscale interior includes a soft-touch dash top, a really nice two-tone black and light grey motif highlighted with a thin blue pinstripe that’s complemented by classy silver finish trim that runs across the entire width of the dash and doors, adding a splash of unique integrity to a car that lacked character before. The light grey accents matched the light grey cloth upholstery in my tester, while the black cloth armrests are finished off with upscale light grey stitching.

A simple yet elegant three-dial primary gauge package is trimmed in chrome, while a handy multi-information display is nestled into the lower half of the centre speedometer. This is accessible via steering wheel controls, as is the audio system, cruise and Bluetooth phone system. The automatic HVAC interface looks high-tech and is ultra-easy to use, with a large rotating temperature dial to the left, a long LCD display to the upper right and a row of buttons just below. All of these features go a long way to show that today’s Corolla is all the car most people need with a host of extras that also fulfill a lot of peoples’ wants.

Yes, the new Corolla is a massive improvement over the old one, yet it retains much of its predecessor’s mechanicals so it remains one of the most reliable cars on the planet, let alone within its compact sedan class. That dependability comes at a cost mind you, mild mannered performance. It does what it needs to, living up to most compact sedan buyers’ expectations, but it’s not about to woo a lot of import tuner aficionados away from any of the usual hot hatches. Despite racy new duds, all Corollas but the top-line LE Eco make do with a DOHC, 16-valve 1.8-litre four with dual variable valve timing with intelligence (VVT-i) packing 132 horsepower and 128 lb-ft of torque, whereas the LE Eco ups the ante with Toyota’s Valvematic continuously variable valve train mechanism that allows for 140 horsepower and a slightly diminished 126 lb-ft of torque. The base transmission is a state of the art six-speed manual, but the entry-level CE model soldiers forward with just four gears when fitted with the optional automatic. You need to step up to my LE tester to get the all-new continuously variable transmission (CVT), which comes standard in this trim and is optional in the S.

This is a very impressive CVT that Toyota gives the sophisticated sounding CVTi-S name due to its Intelligent Shift technology. It’s a completely new design that adds seven stepped “gears” for a more engaging driving experience, although LE buyers might be a bit miffed to find out that the hands-on steering wheel-mounted paddle shifters and thrill-inducing Sport mode are only available with Corolla S trim.

Just the same my Corolla LE was an enjoyable car to drive, its straight-line performance more than adequate for quick takeoffs and highway passing power plentiful to say the least. These days, when I read numbers such as 132 horsepower and 128 lb-ft of torque I try to remember that the cars I fell in love with as a young man only made a fraction of that output, particularly the absolutely wonderful first-generation Toyota MR-2 and even more legendary rear-drive Toyota AE86 (known here as the Corolla GT-S) that only made 112 horsepower and 96 lb-ft of torque apiece. Compared to these past “performance” models, today’s base Corolla is a supercar.

A supercar that can seat five comfortably, mind you, as well as transport a lot of gear in its 368-litre trunk, which can be increased in size for longer items via standard 60/40-split rear seatbacks. Not to mention a supercar that gets truly super fuel economy at a claimed 8.2 L/100km in the city, 6.2 on the highway and 7.3 combined when outfitted like my LE CVT tester, and even better mileage in LE ECO CVT guise.

When comparing four-door compact transportation, it doesn’t get any better than the new 2015 Toyota Corolla. No matter the trim the Corolla looks great, has a beautifully designed interior that’s well finished for the class, boasts impressive standard and optional features, drives well, is priced right, gets great fuel economy and cannot be beaten when it comes to reliability. Enough said.
©(Copyright Canadian Auto Press)
Car Shopping Tools