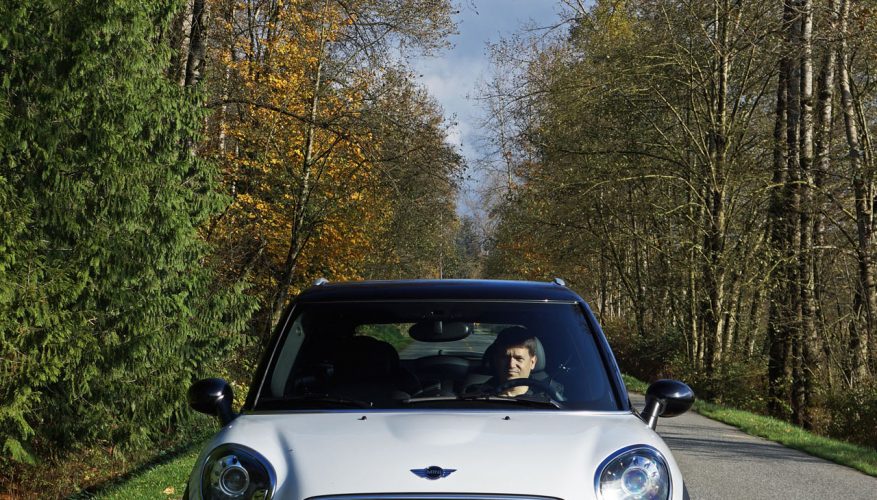 By: Trevor Hofmann
What’s your favourite Mini? With so many different models to choose from even diehard fans of the diminutive brand will have trouble coming up with an answer. Mine used to be the Clubman, but it’s temporarily unavailable while undergoing a wholesale six-door transformation so I’ll reserve judgment on the finished product until I’ve spent time with it. I also have a soft spot for new 5-Door, but if I’ve got to choose just one it’ll have to be the Paceman.

The Paceman is Mini’s version of the BMW X6, or maybe I should say the more recently added compact X4, or better yet the upcoming X2 that will be based on the same platform architecture as the next-generation Countryman. BMW created the sport activity coupe segment when it introduced the X6 eight years ago, a vehicle dreamed up by combining the idea of a rakish four-door coupe with a crossover SUV. Critics panned it for its tighter rear quarters and lack of cargo space, but fans bought them up by the boatload because they were cool, unique and great looking. After such great success it was only natural that Mini, which is owned by BMW, would want a slice of that pie.

Enter the Paceman. Arriving on the market in 2012 as a 2013 model, the Paceman follows the X6 and more recent X4’s example by riding atop its CUV counterpart, albeit in a three-door configuration instead of five. With the Countryman SUV, Mini introduced its ALL4 all-wheel drivetrain along with more rugged styling that includes a larger frowning grille, bigger ovoid headlights, a deeper front spoiler with a black plastic lip extension that continues rearward around each muscled up wheel cutout, down each rocker panel and finally around the rear quarters, and the Paceman followed its beefed up lead. Also paying tribute to the Countryman’s unique design, thick chromed engine vent/trim slants down the aft section of the front fenders, while a bigger winged Mini emblem combines with bold chromed block letters spelling out the PACEMAN model name across the rear liftgate. Last buy hardly least, a larger set of horizontal wrap-around tail lamps add a sporty touch. All in all the Paceman is a wee little ute with some serious spunk.

For 2015, Mini made even more spunk standard, the base Cooper trim relegated to history books and the sportier Cooper S now the entry-level model. What that means is the Paceman’s heavier body shell no longer gets held back by the old non-turbo 1.6-litre four’s 121 horsepower and 114 lb-ft of torque, but instead comes standard with a direct injected and twin-scroll turbocharged version of the same engine resulting in 181 horsepower and 177 lb-ft of torque. What’s more, it will deliver up to 192 lb-ft of torque to all four wheels via overboost. The only optional engine makes 208 horsepower and 192 lb-ft of torque, or 207 lb-ft on overboost, and comes standard with top-line John Cooper Works (JCW) duds. The JCW can accelerate from zero to 100 km/h in just 6.9 seconds and on to a top speed of 226 km/h or 224, depending on whether fitted with the six-speed manual or six-speed automatic, where as the Cooper S requires 7.8 seconds to 100 km/h with the manual or 8.1 with the automatic and tops out at 205 km/h no matter the transmission choice.

Of course, I would’ve loved to get my hands on a JCW Paceman (and still hope to later this year), but I’d be lying if I said time spent with my Cooper S ALL4 Paceman tester was anything but grin inducing. This car is a blast to drive with immediate response to throttle input and even more impressive high-speed passing power. Likewise the six-speed automatic provides quick and fairly smooth shifts, the latter completely automated or can alternatively be provoked via the shift lever or steering wheel-mounted paddles. They’re not the traditional types of paddles where you pull the right one to upshift and tug on the left one to downshift, but rather require you to push via the thumbs at either side to upshift and pull back on either paddle to downshift, which takes a little getting used to if you’re more familiar with a true racing setup, but work just as effectively once acclimatized. In fact, the paddles add such a high level of driver engagement through twists and turns, where the Paceman forgets all about its slightly raised ride height and SUV-like off-road styling and instead zigs and zags as effectively as one of its smaller, lighter front-drive siblings (or at least I never noticed any less road-holding capability), that I’d be inclined to consider them over Mini’s particularly wonderful manual gearbox, just because of the automatic transmission’s convenience in city traffic.

If driven more moderately the Paceman can produce some very satisfying fuel economy numbers too, but so far the brand hasn’t advertised any new five-cycle Natural Resources Canada numbers. Rather, its outdated two-cycle ratings are still up on the website and unfortunately being quoted by all the online Canadian buyers’ guides I was able to research, showing 8.1 L/100km in the city, 6.4 on the highway and 7.3 combined with the manual, or 8.7 city, 6.5 highway and 7.7 combined with the automatic. Digging through the brand’s Canadian press site only resulted in EU cycle information, which showed 8.0 L/100km urban (city), 5.5 extra urban (highway) and 6.4 total (combined), so we all know how realistic the European numbers are (not), therefore for a true reality check we need to go south to the U.S. where the EPA estimates a metric-converted 10.2 L/100km city, 7.8 highway and 9.0 combined. Let’s use these numbers, shall we?

Speaking of numbers, you might be surprised to find out the three-door Paceman is longer than its five-door Countryman brother. The sleeker coupe measures 4,120 millimetres from nose to tail compared to 4,108, the result of longer bumpers. The two models’ 2,596-mm wheelbase is the same and widths come very close at 1,786 mm for the Paceman and 1,789 for the Countryman, but the Paceman is significantly lower than the Countryman at 1,518 mm tall compared to 1,561, a difference of 43 mm.

That tapering roofline initially looked damning for rear seat passengers, but after climbing back there myself in a 2014 model and then doing the deed again in this 2015, I was once again reminded that ample headroom remained above my five-foot-eight frame. The Paceman’s twin buckets reduce total occupancy to four, but these perches are comfortable and almost as supportive as the front sport seats while providing large enough side bolsters to keep those in the rear from flying about during hard cornering.

Another surprise lurks behind those rear buckets, and yes I’m talking about the Paceman’s sizable cargo hold. A total of 330 litres (11.6 cubic feet) of luggage space allows for an average compact sedan’s trunk capacity of what-have-you, and when you drop the rear seatbacks forward it opens up to a considerable 1,080 litres (38.1 cubic feet). What’s more, Mini incorporates a cargo floor divider that’s really handy, plus rubber tie-downs atop the floor that also proved useful.

Roominess is always appreciated, but there are a number of sporty hatchbacks on the market with as much or more space at their disposal. Most of these can’t be called premium compacts, however, but take a seat inside the Cooper S ALL4 Paceman and you’ll immediately see it’s a serious step above mere mainstream wannabes. Soft-touch synthetics cover most surfaces that aren’t specifically glossed over in piano black lacquered plastic, chromed metal or glass covered and electronically infused. With respect to the latter, the Paceman continues forward with Mini’s classic centrally located speedometer, although in my navigation-enhanced tester the speedo spins around the outer edge of the massive dinner plate-sized interface, its inner core incorporating Mini Connected, which is one of the best infotainment systems in the industry.

This doesn’t come standard, mind you, but rather is part of the optional Wired Package, available for an additional $1,450 over the base model’s $31,200 starting price, plus $2,295 for freight and pre-delivery preparation (such a big freight charge for such a little car), while the Wired Package also includes voice recognition, Bluetooth and USB audio, plus smartphone integration.

My tester’s Light White exterior paint forgoes the $590 cost of a metallic coat, and it should be noted its black mirror caps and roof don’t add a surcharge either. A set of black bonnet stripes could have spiffed up the hood to the tune of $150, but these weren’t included, although looking upward at the dual-pane panoramic glass sunroof made it immediately evident that Mini’s Essentials Package (also $1,450) was chosen. Yes, I can guess what you might be thinking: Since when did a panoramic sunroof become essential? But hey, we’re talking compact luxury here, not simple A-to-B transportation. Also included in this package are heated front seats (they are essential in Canada), LED fog lights (ditto) and a Sport button (double-ditto)!

On that last point, some might consider rain-sensing wipers essential Canadian fare, not to mention automatic headlamps, automatic climate control, an auto-dimming rearview mirror, a front centre armrest, HID headlamps, and proximity sensing remote keyless Comfort Access, let alone the $1,150 Loaded Package’s white-lensed turn signals, and fortunately all of these were added to my tester, as was the $1,400 automatic transmission I mentioned earlier.

You may have also noticed a sweet set of gloss black alloys rounding out this particular Paceman, these 17-inch rims dubbed 5 Star Black Spoke Alloy Wheels, wrapped in 205/55R17 Pirelli Cinturato P7 all-season tires and costing only $200 extra. There are loads of other available options too, from various hues of leather hides to a number of alternative trims in varying colours, plus parking sensors and Harman/Kardon audio to alarm systems and a sport suspension upgrade; your wish is Mini’s command.

Whether the Paceman is your personal favourite Mini or not, the very fact that it exists proves that the Brits at Bracknell, Berkshire think completely outside of the box, not to mention are a very brave bunch. The Paceman doesn’t exactly sell at a blistering pace. It’s not one of those Minis you’re likely to see passing by on a daily or even weekly basis, which gives it a certain exclusive cachet. If you want something very different and very special, consider this wonderfully fun and totally useful little car that’s not really a car at all. It’s a Sport Activity Coupe (SAC)… Or maybe it’s a Crossover Utility Coupe (CUC)? Either way, the Cooper S ALL4 Paceman certainly doesn’t SUC.
©(Copyright Canadian Auto Press)
Car Shopping Tools