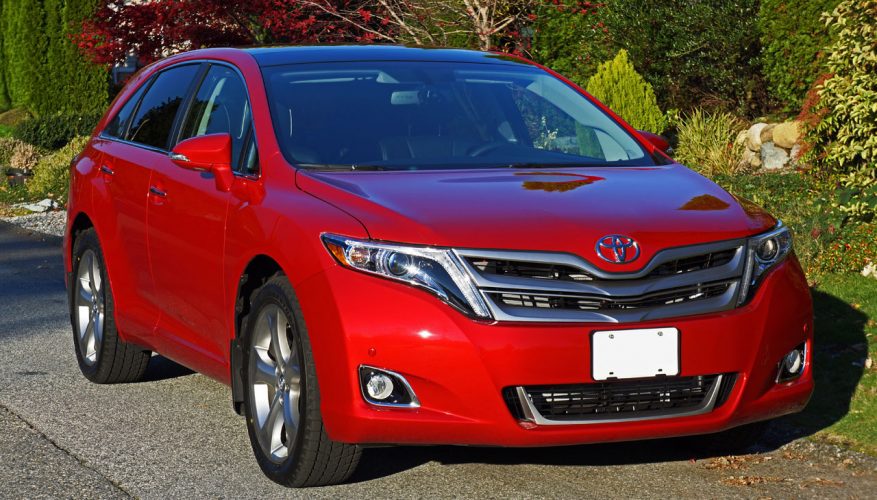 By: Trevor Hofmann
So you want to buy a new vehicle, but a mid-size sedan isn’t versatile enough for your active lifestyle and not really your style anyway, minivans are hardly mini anymore and don’t even begin to fit your image, and most of the mid-size crossover SUVs are simply too large and truck-like. Fortunately for you Toyota has been busy filling forgotten niches over the last number of years, one of which was a void left by its long-departed Camry Wagon. Rather than elongate the Camry’s roofline and add a liftgate to the rear the company rethought the entire wagon concept and in the process reinvented it, the result being a low-slung crossover-like five-door dubbed Venza.

For those in the know the Venza is nothing new. Toyota brought it to market in 2008 as a 2009 model and it’s been selling strong ever since. Even after six years on the market with only minor updates its design remains fresh and unique, mostly because there’s nothing else quite like it on the road. Certainly the idea of a crossover wagon isn’t original, but those carmakers that offer such a beast have merely muscled up their regular wagon offerings and rechristened them crossovers. Alternatively Toyota started with an entirely clean slate design that looks nothing like the Camry or any other product that shares the brand’s K platform architecture. In the end they created a real winner, popular for all the right reasons.

My tester’s gorgeous coat of Barcelona Red metallic paint didn’t lose it any style points, although the Venza’s standard satin-finish upper and lower grilles, chrome trimmed circular fog lamps, body-colour mirror caps with integrated turn signals (added to the standard menu this year), sporty rooftop spoiler, and tastefully applied chrome accents, including twin chromed tailpipes, have it looking good in each and every one of its six additional colours and shades. Base models even include 19-inch alloy wheels on meaty 245/55R19 all-season tires, although my tester looked even better in a set of five-spoke 20s on 245/50s, a substantive wheel and tire package that ideally fills out the Venza’s profile.

These wheels come standard on the V6, while my tester’s optional Limited trim adds auto-leveling HID headlamps with de rigueur LED daytime running lights, clearance and backup sensors (that you’ve got to look a little closer to see), as well as a panoramic glass sunroof that blackens out much of the rooftop, the latter actually standard on the mid-range XLE model. All in all it’s a great looking five-door with just enough bulk and height not to be mistaken for a station wagon and ample car-like style not to be lumped into the SUV category. Truly, it’s the crossover of crossovers.

In order to keep pace with competitors and others within the Toyota fold that have been recently updated, the Venza gets a number of interior upgrades for 2015 that should be welcomed by would-be buyers. First, all models get Toyota’s latest 6.1-inch display audio system with a full-colour touchscreen incorporating a back-up camera system, Bluetooth hands-free connectivity, and an upgraded AM/FM/MP3/WMA/CD audio system with aux and USB inputs, satellite radio, automatic sound levelizer technology, and a multifunction steering wheel with redundant controls for all of the above as well as setting the cruise control. Additional standard features include bright and colourful Optitron primary gauges, tilt and telescopic steering, heated powered mirrors with integrated blindspot mirrors and puddle lamps, a multi-information display, dual-zone automatic climate control, an eight-way power-adjustable driver’s seat, powered windows with one-touch auto up/down functionality all-round, and faux woodgrain trim.

On top of this are standard finishings that spiff up all Venzas, such as a soft surfaced dash top and front door uppers, a really nice large speedometer with a cool aquamarine blue ring circling around it and large tachometer to the left, while the woodgrain trim on the base model was replaced with a sportier looking silver carbon patterned gloss surfacing on my test vehicle. If it sounds like I was driving a premium-level luxury CUV, the Limited comes pretty close.

Part of the premium feel came from its 3.5-litre V6 powerplant, a significant move up from the base model’s 2.7-litre four-cylinder. Both aluminum block engines feature dual overhead cams and four valves per cylinder, as well as dual variable vale timing with intelligence (VVT-i in Toyota-speak) that help them achieve identical Tier 2 Bin 5 emissions ratings, while both come with a heavy-duty battery, heavy-duty starter, alternator and heater, plus stainless steel exhaust systems. The V6 sports a dual exhaust, however, not to mention the obvious addition of a lot more power. Compared to the 2.7, rated at an even 182 horsepower and 182 lb-ft of torque, the 3.5 boasts 268 horsepower and 246 lb-ft of torque resulting in quick acceleration whether leaving a stoplight, powering up a highway onramp or passing slower traffic on the freeway.

While powerful, I’m not going to go so far to say the Venza’s driving experience rivals sport models, but rather its power delivery is smooth and shifts from its six-speed automatic seem more purposefully calculated than quick and snappy. This said it includes manual mode for DIY shifting, whether using the shift lever for maintaining higher revs during a twisting bit of backcountry roadway or for short-shifting early in order to save on fuel, it’s all good. The Venza’s electric power steering is fairly light and therefore easy to use in parking lots and around town, but felt firm enough on the highway for confidence-inspiring high-speed motoring, aided of course by the car’s front and rear strut and stabilizer bar infused fully-independent suspension. All in all it’s a nice car to drive, balancing a comfortable ride with just enough performance-tuned sport for a little fun behind the wheel when opportunity arises.

No matter whether you’re hypermiling or flogging the throttle the Venza will accommodate you and four guests in absolute comfort, my tester’s leather-clad driver’s seat ergonomically ideal for my backside and the car’s surrounding roominess likely good for much larger body types as well. The variable temperature front seat-heaters warm up quickly and can be set at simmer or near scalding – good enough for therapeutic heat treatment. Another Venza bonus is visibility, which is enhanced via small triangular windows ahead of the door pillars, nice big windows all-round and of course its taller than average ride height. Its standard convex blindspot mirror-ettes are helpful too, expanding visibility where it’s needed most.

That standard rearview camera helps too, while a host of standard safety gear will give Venza owners an additional dose of emotional comfort. Along with the expected ABS-enhanced four-wheel disc brakes with electronic brake-force distribution, emergency brake assist, VSC stability control and traction control, the Venza gets hill start assist to stop the car from rolling back while taking off from an incline, plus Toyota’s unique Smart Stop Technology (SST) that reduces power to the engine when the car is braking, plus in addition to the normal assortment of dual-front, front side-impact and front and rear side-curtain airbags the Venza gets a knee blocker-bag for the driver. Lastly, height adjustable front shoulder belts not only fit the body better to improve crash protection, but they’re a lot more comfortable too.

Critically important in a crossover buyer’s decision process is overall functionality, and to that end the five-seat Venza benefits from its large mid-size footprint. Cargo space measures 870 litres (30.7 cubic-feet) behind the 60/40-split seatbacks and up to 1,990 litres (70.1 cubic-feet) when these are laid flat, which should be ample for all but the largest of loads.

Cargo convenience in mind, an absolutely giant bin resides underneath the front centre console, which can be found by sliding the cupholders, phone holder and all backwards. That phone holder is extremely handy, by the way, and I should also mention that having a sunglass holder fitted to the overhead console is a big bonus as well.

Now that I’m heaping accolades on the Venza, I might as well continue by telling you how much I like the tight and compact automatic HVAC interface. Everything needed is set within a tiny four-by-three panel, curved at the upper left corner where a large rotating driver’s side temperature knob makes adjustments easy even while wearing winter gloves – the passenger’s temperature knob is slightly smaller but still large enough for glove-clad hands too. Then again, just above, within the infotainment/audio system interface, the rotating volume knob felt a bit loose, especially the surrounding chromed ring. It may have been a one-off problem with my tester alone, but needs to be mentioned.

With a vehicle as good as the Venza it’s difficult to find fault, and no car is perfect. For the most part Toyota has ironed out any major wrinkles over its long tenure, and what we’re left with is an impressively accommodating and capable mid-size five-door endowed with a good blend of comfort and performance. Feature-filled like my V6 AWD Limited model, it’s a veritable luxury CUV, although the base Venza is still well equipped with an impressive list of standard features. Pricing for that model starts at $29,610 plus $1,690 for freight and pre-delivery preparation, while the top-line V6 AWD Limited version I drove stickered at $40,150. Either price is competitive, making the 2015 Toyota Venza a good value as well as a great choice in the mid-size CUV category.
©(Copyright Canadian Auto Press)
Car Shopping Tools