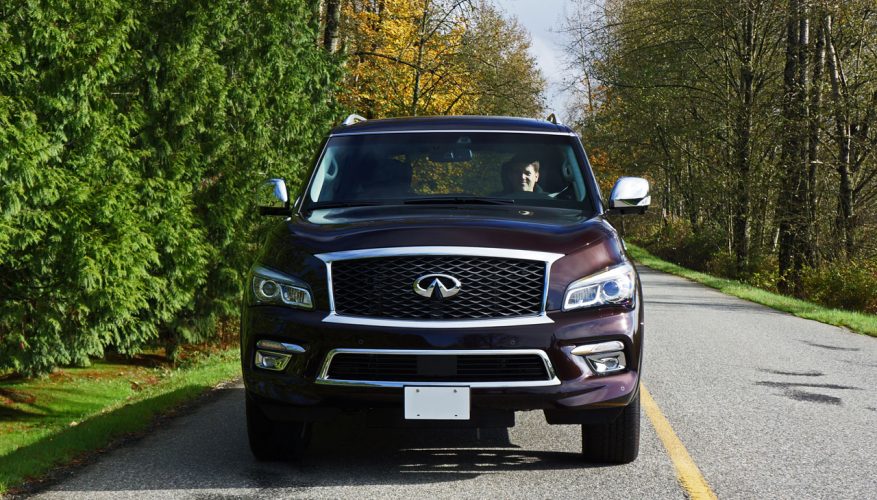 By: Trevor Hofmann
For those of us who love true 4×4-capable SUVs, the pickings are thinner than they’ve ever been from volume brands. Then again, add a willingness to pay for a premium nameplate and a wider variety of top-tier off-roaders become available. Amongst these the full-size Infiniti QX80 is not only one of the nicest, but also one of the segment’s best overall values.

The QX80 has been given a refresh for 2015, which includes a slightly updated grille with Infiniti’s sportier new trademark diamond-pattern mesh insert replacing the six chromed ribs of last year’s version (it already received the Infiniti’s newly reshaped grille surround two years ago for its 2013 update), plus new LED-infused headlamps, a completely reworked front bumper and lower fascia with a chrome-rimmed secondary grille and glitzier set of combination LED fog lights set within multifaceted brightwork surrounds, while from the rear the changes are less obvious, including a new fully integrated bright metal bumper protector and new flush-mounted sonar sensors set within the rear bumper caps (ditto up front). Additionally, if you upgrade to the Technology package as per my fully equipped tester, the body-colour mirror caps get replaced with a set of chromed covers for an even more upscale appearance, while underpinning all the updates on my Technology-trimmed model was a gorgeous set of 22-inch multi-spoke alloy rims on 275/50R22 Bridgestone Dueler H/T tires, ultra-large on most anything else but looking ideally sized on this substantive Infiniti (20s are standard). Yes, to say the QX80 has presence after seeing it in photos doesn’t even come close to the awe-inspiring effect it has in person.

It’s the difference between watching someone like six-foot-five Hollywood star Christopher Lee on a late night movie channel and abruptly turning around only to see chest hair (shorter folks like me will be able to relate); the QX80 is big. Unlike most of Lee’s characters, however, such as Saruman the White in the Lord of the Rings trilogy, Count Dooku in Star Wars: Episode II – Attack of the Clones, James Bond villain Francisco Scaramanga in The Man with the Golden Gun, or title monsters in horror films like The Curse of Frankenstein, The Mummy and Horror of Dracula, the XXXL-sized Infiniti is actually quite friendly.

This immediately becomes evident upon stepping up and into the QX80’s opulent cabin via its standard running boards. Planks of new Stratford Burl wood trim look decidedly rich, while brighter aluminum trim adds flash to the steering wheel and white contrast stitching more effectively highlights the leather surrounding the centre stack as well as the leather-wrapped door pulls, leather-covered door uppers and armrests. Like last year’s QX80, softly padded stitched leather surfacing is everywhere. In addition to those places already mentioned, you can find leather covering the steering wheel (unless it’s optionally trimmed with a thin strip of wood), the shifter knob and boot, and the seats of course, the latter finished in soft semi-aniline leather. Their inserts are perforated for standard forced ventilation along with the usual heat, adjustable via a set of rotating knobs on the lower portion of the centre stack, part of a switchgear package with a level of fit, finish and finely tuned damping that makes many in the premium set look shabby. The centre stack alone features pull buttons for automatically sliding the second-row seats forward in order to let third-row passengers aboard without the need of getting out of your seat, plus a heated steering wheel button and covered 12-volt socket between those seat warming/cooling dials, while just above is a row of tightly fitted HVAC buttons nestled between individual driver and passenger automatic temperature dials. Above these are knobs for the audio system surrounding yet more buttons and a slot for CDs, all hovering around one of Infiniti’s most beloved trademarks, a gorgeous analog clock. A row of infotainment controls sits below a slightly recessed eight-inch colour touch-screen display, finishing off the topmost portion of a centre console, which stretches down below to meet up with a leather, chrome metal and aluminum-finished gearshift lever as well as an elegant assortment of buttons surrounding a large rotating dial, controls for Infiniti’s All-Mode AWD system that connects through to a computer-controlled transfer case with settings for Auto, 4H and 4L.

The infotainment system, incidentally, allows access to navigation with lane guidance and 3D enhancements, an Around View monitor with moving object detection, audio functions, climate-control, fuel economy and maintenance info, plus comfort and convenience features, the latter including NavTraffic, Zagat restaurant guide, and Infiniti Connection telematics. A standard rear entertainment system features dual seven-inch headrest-mounted monitors, the sound coming from a standard Bose audio system featuring 15 speakers including two subs for truly impressive sound quality, whereas the usual AM/FM/single-CD/DVD setup is part of the package, as is satellite radio, RDS and speed-sensitive volume. Bluetooth hands-free phone connectivity is standard too, as is wireless audio streaming from your personal device, while you can also plug in your smartphone or iPod via a USB port or multiple auxiliary audio/video inputs on the centre console. Redundant controls can be found on the steering wheel spokes, and they’re conveniently illuminated for use at night.

On that note the standard pushbutton ignition is illuminated too, just part of a proximity sensing system that allows keyless access to get inside. You can alternatively prestart the QX80’s engine with remote start, warming up or cooling down the interior as best suits the time of year. The steering wheel features powered tilt and telescopic capability, while two-way driver’s seat memory brings it back to your chosen position at the touch of a button when reentering, along with the driver’s seat and exterior mirrors, the latter which are also auto-dimming, power folding, and heated, plus include integrated turn signals, courtesy lights and reverse tilt-down.

The last two features are standard because most buyers purchase the QX80 with intentions to tow a large trailer carrying a boat or camper. Of course, a tow mode feature is standard as is its substantive 3,855-kilo (8,500-lb) tow rating. I never had opportunity to haul an Airstream Flying Cloud 28 up a steep grade or pull an Allante 825 out of the water via a heavily raked boat launch, but I’m quite certain it would manage such duties with ease.

The QX80’s standard 5.6-litre V8’s 400 horsepower and 413 lb-ft of torque made no qualms about motivating the SUV’s 2,500-plus-kilo (5,633-lb) curb weight along with my partner and my added girth. The big rig charges off the line with surprising energy, its seven-speed automatic wonderfully smooth if not as multi-cogged as some rivals.

Like the gearbox the QX80’s ride is impressively smooth, one of the benefits of big, traditional body-on-frame SUVs. What wasn’t expected however was how well Infiniti’s largest manages corners, totally living up to the brand’s performance-oriented image as it stays loyally planted to the tarmac through fast-paced curves, begging to go faster and totally confidence inspiring throughout the process.

To think that the QX80 is also one of the more capable luxury utes available when pavement turns to gravel, and gravel turns to dirt, mud, sand, rock, snow or even ice, is just another impressive quality inherent in its design. As mentioned, all 4×4 functions can be administered via an interface on the lower console just behind the gearshift lever, allowing you to set Infiniti’s computer-controlled All-Mode AWD to Auto mode, 4-high or 4-low. Auto is all that most people will ever need, which apportions torque to each wheel as conditions require and sends up to 50 percent to those up front when needed.

I’m guessing if fuel prices continue to remain low, large SUV sales will grow despite less than appealing fuel economy ratings. In this respect the QX80 is no worse than its full-size peers and better than some, receiving a National Resources Canada estimate of 16.9 L/100km in the city and 11.9 on the highway. Noteworthy, these numbers reflect the new five-cycle testing protocol which is much more accurate than the previous two-cycle process, while even better news is the QX80’s requirement for only regular unleaded fuel, which saves about 10 percent when refilling its 98.4-litre tank.

I’m going to step out on a limb by assuming most full-size luxury SUV buyers aren’t as worried about fuel economy as the economy car set, which makes sense as purchasing a QX80 begins at $73,650 plus $1,995 for freight and pre-delivery prep (incidentally only $450 more than last year’s model despite its many upgrades). The price is the same whether going for a seven- or eight-occupant version, making it the full-size luxury SUV segment’s best deal by far.

I should mention something that some others in this class don’t do quite as well as Infiniti, treat those in back as well as those up front. The rear doors are as nicely detailed as the ones just ahead, while the fold-down centre armrest gets dressed up in the upscale wood treatment too. The seven-occupant model’s second-row passengers get standard heated captain’s chairs while eight-passenger QX80s incorporate a 60/40-split bench with heated cushions in the outboard positions. Access to the third row is ultra-easy via those automated forward flipping second-row seats I mentioned earlier, complete with front-seat controls, while those riding in back will want to be shorter in stature (kids being ideal) to maximize comfort; par for the course with most vehicles in this class.

Open the powered rear liftgate and you’ll likely appreciate how easy it is to drop that third row into the cargo floor, a set of buttons allowing the power folding mechanism to increase cargo capacity from 470 litres to 1,405 behind the second row. Lay the middle row flat and a total of 2,694 litres is at your disposal, ideal for weekend trips to the building supply store.

In summary, Infiniti’s 2015 QX80 continues to offer superb quality and refinement plus loads of useful features in a very well priced package. To pass by this impressive machine without giving it the respect it’s due would be a mistake.
©(Copyright Canadian Auto Press)
Car Shopping Tools