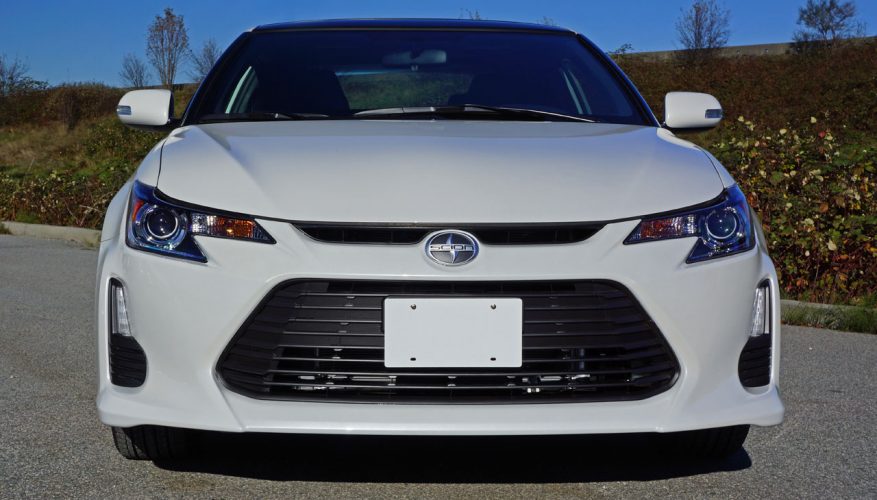 By: Trevor Hofmann
Last year Scion gave us a much better tC, with aggressive new styling, a reworked interior and suspension upgrades to improve handling. I drove it, really liked the improvements and therefore was delighted to give it a second run this year. After all, there aren’t many compact sport coupes still available on today’s market and I certainly wouldn’t want to miss an opportunity to drive something as unique as the tC, even if it hasn’t changed since its 2014 remake.

I shouldn’t make it sound as if the tC hasn’t changed at all, that is if you count special editions as change. For 2015, in partnership with California-based Cartel Customs, Scion has created the tC Release Series 9.0, a black and orange street machine that’s so brazenly bold that it will either be a must-have addition to your sporty car collection or end up in the “no way am I going to be seen in that” category (it’s the perfect accessory for ardent BC Lions fans, however).

While I happen to love most things orange, my 2015 tester was much less noticeable in its premium coat of white Blizzard Pearl ($225 extra and well worth it). Other than the paint, this year’s tC was outfitted much the same as the Absolutely Red example I had last year, right down to the choice of an optional six-speed automatic transmission instead of the standard six-speed manual. The advanced autobox sports paddle shifters to enhance the driving experience as well as Dynamic Rev Management technology, a system adopted from the much-lauded FR-S’ optional automatic, which upon downshifting immediately blips the engine to match revs with the next gear, reducing driveline shock and making you sound and feel like a racing pro.

Behind the new tC’s more intimidating grille lies a very familiar Toyota powerplant, namely the automaker’s 16-valve, DOHC, 2.5-litre four-cylinder also found in the base Camry and RAV4. It features dual variable valve timing with intelligence and a 10.4:1 compression ratio, resulting in a very motivating 179-horsepower and 172 lb-ft of torque. That’s ample output for quick getaways and sufficient highway passing power, even when powering up a long, steep stretch of freeway as I experienced, while the transmission’s paddles react to input twice as quickly as those on the old 2013 models’ autobox, and the driver involvement they add in Sport mode where the transmission holds its gear right up to redline before shifting on it’s own, along with the rev-matching downshifts, turns what could otherwise be a relaxing sporty two-door into a true performance machine.

Then again, the tC is ideal for laidback cruising too. When so doing it’s good for a claimed 10.2 L/100km in the city, 7.7 on the highway and 9.0 combined with the manual or 10.2 city, 7.6 highway, and the same 9.0 L/100km combined with the auto. If you notice that these numbers are significantly higher than what Scion advertised last year, take note that it’s no fault of Scion’s but rather the result of Natural Resources Canada’s change from a very unrealistic two-cycle testing process to a new much more useful five-cycle protocol, which means the manufacturer claimed fuel economy ratings can now be believed.

Sport coupes don’t exactly bring out the green in most people, however, tempting some of us to use a heavier right foot more often and others to wait a bit longer to brake before taking to corners a little faster. Fortunately the tC is up to the task, with ABS-enhanced four-wheel discs incorporating electronic brake-force distribution and emergency brake assist as standard, plus Vehicle Stability Control (VSC) and traction control (with a button to turn it off, no less) to keep the tC’s beefy 225/45R18 Toyo Proxes A20 tires in complete contact with the road no matter the weather conditions.

Scion offers a dealer-installed brake upgrade kit that would produce even stronger response without doubt, which is something to consider for those who regularly hit the autocross course. Beefier sway bars for the tC’s fully-independent MacPherson strut front and double wishbone rear suspension are available too, not to mention a lowering kit, but the tC’s rigid chassis would be just fine for my requirements. It’s firm but hardly uncomfortable, ideal for a car that appeals to the performance set but still finds many buyers just looking for a sporty two-door commuter. No matter its daily purpose, tC buyers will enjoy an electric powered rack-and-pinion steering system that was effectively recalibrated last year to provide much better feel and more confidence-inspiring turn-in, making a lot better use of the aforementioned rims and rubber.

Those tires wrap around a very stylish set of machine-finished twin-five-spoke 18-inch rims with dark metallic grey-painted inserts, impressive rolling stock for a compact model. While aiding performance, these might even add more to the tC’s visual presence, although anything less would look out of place. When Scion restyled the car last year, its new projector style halogen headlight design was the first element to grab my attention. The lenses’ jagged shape gave the tC a mean new attitude, made even more pronounced by a longer hood which leans into a much larger, more assertive grille that noticeably inherits styling influence from the fabulous FR-S. Other stylish details include little grillettes at each corner of the lower front fascia; these filled with a vertical stack of LED accent lights. Body-colour side mirror caps display integrated signals on the outside and incorporate power-adjustable heated mirrors within, while at the rear its valance also appears influenced by the FR-S, and includes great looking clear-lensed LED taillights as well as a sweet set of vertical corner reflectors.

Those looking for as many updates to the tC’s interior as the exterior received last year might have been disappointed, but I certainly find little to complain about. The theme of my new 2015’s cabin was identical to last year’s tester, replete with the tC’s new lighter grey subtly striped fabric seat inserts surrounded by grippy black cloth bolsters. The sport buckets look good and feel great, totally comfortable and quite supportive, although height-adjustable shoulder straps would be appreciated. This said the whiplash protecting active headrest technology hidden within is a comforting bonus.

On another note I particularly like the car’s flat-bottomed steering wheel, which not only looks cool but also allows for more legroom when tilting the steering column lower down for a better view of the gauges. Its rim is wrapped in a perforated stitched leather for a very upscale look and nice feel complemented by comfortable thumb spats, whereas attractive metallic grey plastic covers each of its three spokes, the leftmost one the only place you’ll find redundant switchgear for the audio system (its standard cruise control functions can be found on a stalk just below the right spoke).

If you need to answer your Bluetooth-connected phone just press the “button” on the Scion/Pioneer-branded 6.1-inch “Organic Electro-Luminescence Display” infused infotainment system when prompted to do so, and Bob’s your uncle. Embedded within this system is the usual AM/FM radio and single-CD player with MP3/WMA/AAC capability, while aux and USB ports allow wired connectivity to phones and personal players. The eight-speaker system sounds great, better for big-bass trance and dance tracks as well as straight-ahead rock than the subtle nuances of classical or even the mid-range tones needed for talk radio, but no doubt this type of system appeals to the tC’s target market. If you take a little time to get to know it you can adjust the system to your needs via some impressive “sound-shaping” programs, but I must admit its touch-sensitive interface can be a bit tricky to use.

On the other hand the tC’s simple, clear and large primary gauges will be welcome for those who appreciate traditional two-dial tachometer and speedometer readouts, and ditto for the simple manual HVAC system on the lower centre stack that combines three rotating dials with buttons at their centres to modulate airflow/recirculation, fan speed/rear defrost, and temperature/air conditioning. They’re large enough to use with winter gloves, and finished with nice chromed rims.

Where the tC’s cabin might be lacking a bit compared to more recently updated rivals, is its complete lack of any soft-touch surfaces other than the attractive fabric-lined door panel inserts and armrests, plus the centre armrest/storage bin lid. Nevertheless the tC offers up an attractive interior design with some truly nice textures, particularly its dimpled grey dash surfaces. The car’s fuzzy roofliner is a lighter grey shade like the seats below, and surrounds one of the car’s most appealing standard features, a double-pane panoramic sunroof.

Whether enjoying the view out the roof or from the surrounding windows, tC occupants will also find themselves more comfortable than in most other two-door coupes. Head and legroom bests every rival, while the rear seats can actually accommodate three real adults side-by-side. Just the same it’s better to keep it to just two as the rear centre position has been raised somewhat higher than the deeply sculpted outboard seats, in sport coupe fashion. The rear seatbacks can recline up to 45 degrees if back passengers decide to snooze, while these can also be laid flat for extra cargo if the tC’s 417-litre (14.7 cubic-foot) trunk isn’t large enough (or more specifically long enough) for all your gear.

While Scion is more of a well-kept secret than parent company Toyota would like, much of what makes the Japanese giant good is integrated into the tC. I’ve mentioned some of the safety features that come as part of the automaker’s Star Safety System, but have yet to point out its Smart Stop Technology (SST) that cuts power to the throttle when the brakes are being pressed, not to mention its eight total airbags including two blockers-type airbags for front occupants’ knees.

A Scion trait that is very different to Toyota is the way the brand packages its cars. In an unusual move the youth-oriented division only offers a single trim level stuffed full of features except for transmission choice, the tC’s base price of $21,490 plus $1,495 for freight and pre-delivery prep just needing $1,300 for the automatic option. Rather than selling options, the brand offers a long accessories list including leather upholstery and front seat heaters for $2,075, a $477 security system, a Bongiovi Acoustics DPS upgrade for the stereo that’s easily worth the $320 extra if you’re an audiophile, and a premium display audio system with navigation for $1010. The difference between when Scion began and now is that these features are actually options added at the manufacturer’s production plant in Tsutsumi, Japan even though they show up in the accessories menu of the brand’s website, rather than dealer-added accessories. There’s plenty of dealer-added kit too, mind you, such as a larger 19-inch TRD wheels and tires, TRD aerodynamic kits, a TRD shift knob, doorsill plates, remote engine start, cargo accessories and more, so tuning your tC exactly the way you like remains part of Scion’s appeal.

On that note the 2015 Scion tC remains a very intriguing choice in the two-door coupe market. Fans of the FR-S aren’t likely to be swayed down-market for this more entry-level two-door, but those who want a fastback design with good road manners yet totally livable functionality should consider the tC seriously. What’s more, along with all of its sporty goodness comes Toyota’s legendary dependability, which should be reason enough to make the tC number one on your list.
©(Copyright Canadian Auto Press)
Car Shopping Tools