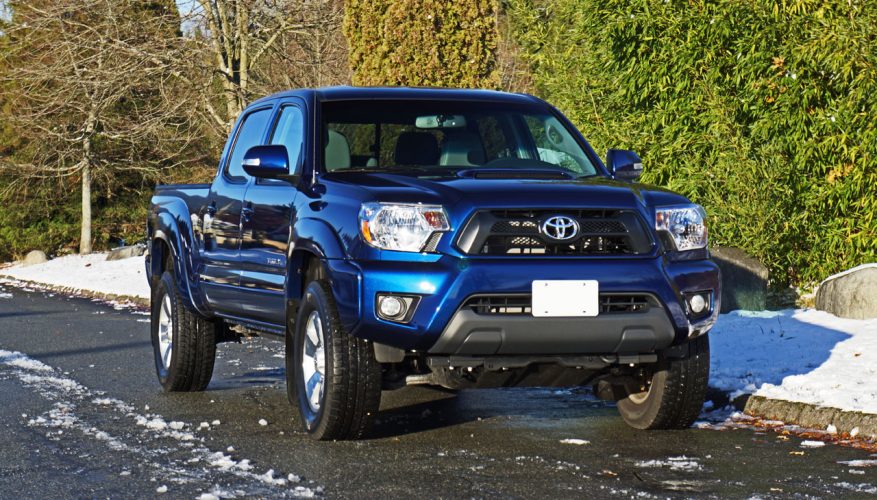 By: Trevor Hofmann
If there’s a perfect example of how to do the light-duty pickup truck market right, Toyota and its midsize Tacoma is it. Consider for a moment that the Tacoma once played third fiddle to the Ford Ranger and Dodge Dakota, two models that it has since completely displaced from the North American compact/midsize market, and currently outsells its most prominent competitor two to one, and it’s easy to appreciate that the Tacoma deserves respect.

Honda has tried to do battle against the Tacoma with its unorthodox Ridgeline since 2005 and suffered such poor sales last year that it recently pulled the model off the market with a promise to return with a totally redesigned attempt for 2016, but this is when Toyota will punch back with a completely revamped Tacoma. Until then, the well-proven battle warrior will need to duke it out with two fresh remakes from General Motors, the Chevrolet Colorado and GMC Canyon twins reborn from the ashes of identically named trucks that were abandoned in 2012.

These returning foes pose no real threat to the Tacoma, its ultimately loyal fans not likely taking a risk on a domestic brand after being served so faithfully for so many decades. The Tacoma has been produced for 20 consecutive years, albeit in a more compact format during its first generation, and before that its predecessor (simply dubbed Toyota Pickup here in North America) steadily built up the Japanese brand’s reputation in the compact truck market over a 36-year tenure. That’s 56 years of continual compact/midsize pickup truck success, a lot of history to build on.

Even after all these years, with only subtle tweaks to the truck’s styling in 2012 since its 2009 facelift, the Tacoma continues to look great. Rugged, tough and solid looking, it’s not trying to be a car like Honda’s unibody Ridgeline and looks downright meaner than Chevy’s slick new Colorado and GMC’s upscale Canyon. Nissan’s aging Frontier hasn’t changed much since 2009 and won’t likely for a couple of years to come, so it certainly won’t be stealing sales from Toyota, and Ford, despite offering an impressive new Ranger in other markets, isn’t even trying to play ball in the compact/midsize pickup truck segment, so Toyota’s reign as sales leader doesn’t appear to be in much threat.

My 2015 Tacoma tester came in 4×4 Double Cab V6 TRD Sport trim, which meant its four-door cab could easily house five full-size adults in comfort, and stylishly get them where their going quickly no matter the road or trail surface. The Tacoma can be had in two cab styles, the base Access Cab providing two rear-hinged “suicide” doors opening up clamshell style, and the Double Cab featuring two regular front-hinged rear doors for much friendlier rear seat access along with more rear legroom. The Access Cab can only be had with one 1,866-mm (73.5-inch) bed length, but option it out as a Double Cab, which incidentally only comes with four-wheel drive, and a shorter 1,531-mm (60.2-inch) bed can be had as long as you get it with the base six-speed manual gearbox, whereas 4×4 Double Cab V6 models with the automatic come with the longer bed, extending the entire length of Toyota’s “little” pickup from 5,285 mm (208.1 inches) to 5,620 mm (221.3 inches). Just why the Japanese brand’s Canadian division has chosen to fit out its Tacoma like this is anyone’s guess, but it’s the way it is and the result was a very long, albeit very accommodating midsize pickup truck, that is until it came time to park it on a busy city side street. Of course, it’s still not anywhere near as long as a four-door Tundra or any of that model’s full-size competitors, but then again there’s no way we can mistake the Tacoma for a compact truck anymore.

For this reason the brand’s 159 horsepower and 180 lb-ft of torque-rated DOHC, 16-valve, VVT-i-enhanced 2.7-litre four-cylinder engine is only available with the smaller Access Cab using either 4×2 or 4×4 drivetrains, the much stronger DOHC, 24-valve, VVT-I 4.0-litre V6 boasting 236 horsepower and 266 lb-ft of torque getting the nod as an option with the Access Cab 4×4 and coming standard with all Double Cab models. This engine pulled well despite my tester’s not so compact 1,914-kilo (4,275-lb) curb weight, and despite only utilizing a five-speed automatic. The standard gearbox in the same trim is a six-speed manual, whereas the base Tacoma gets fitted with a five-speed manual and has the option of a four-speed automatic; Toyota would use the term “proven” for such a gearbox, but I prefer old.

Nevertheless the Tacoma performs well in fuel economy tests, the base engine achieving a new five-cycle rating of 11.3 L/100km in the city, 9.5 on the highway and 10.5 combined when mated up to the manual transmission in 4×2 guise, while the same truck using the aforementioned somewhat antiquated automatic gets a claimed 12.2 city, 9.9 highway and 11.2 combined. Add four-wheel drive to the equation and the Tacoma’s four-cylinder economy estimates rise to 12.9 city, 11.5 highway and 12.3 combined with the manual or 13.1 city, 11.3 highway, and an identical 12.3 combined with the automatic, whereas the V6 4×4 gets a claimed 15.3 L/100km city, 12.3 highway and 14.0 combined with the manual or 14.8, 11.6 and 13.4 with the automatic. That last number is almost exactly what I experienced after a week behind the wheel of my Tacoma 4×4 Double Cab V6 tester, which while high for a Tacoma was still pretty efficient as far as pickup trucks go.

On that note I just returned from a trip to Manila, Philippines, where the very similar Toyota Hilux gets fitted with a much more efficient turbo-diesel that makes me wonder why Toyota doesn’t offer such an engine here at a time when the full-size Ram 1500 EcoDiesel is enjoying so much success, and the Tacoma’s new GM rivals will be available with diesel power. Toyota may feel that such an oil-burning diesel image might not suit its ultra-clean, eco-friendly persona here in North America, but if it were a clean-burning diesel that truly added mileage and therefore economy, it would likely prove better for the environment in the long run. Either way, truck buyers would line up for it just for its performance advantages, diesels inherently offering a lot more torque than their gasoline counterparts, resulting in benefits off-road and tremendous pulling power advantages.

Empty except for my significant other/photographer extraordinaire at my side, our Tacoma 4×4 Double Cab V6 was plenty powerful off the line and easily capable of keeping up with fast-paced traffic on the freeway, while its long wheelbase helped smooth out any rough patches of pavement for what was a surprisingly compliant ride, at least as far as smallish pickup trucks go. Likewise the Tacoma handles well for a body-on-frame machine riding on 265/65R17 Michelin X-Ice studless snows, a great tire for managing slippery winter conditions but not exactly optimized for high-speed cornering in the dry.

There’s also a handy lidded cubby next to the power outlet for storing small what-have-you items and a larger one directly across on the driver’s side cargo wall, and the cargo box itself is fully lined in rugged plastic. Cargo convenience items in mind, Toyota might also want to consider some of the useful new features showing up in the full-size segment when it introduces its production-ready 2016 model (none of these features appeared available on the show truck or any of the associated press photos), such as foot-steps inserted in the sides of the rear bumper, a pullout step hidden within the liftgate, pop-out steps hidden at each side of the box, not to mention optional lidded bins built into the cargo box walls.

The current Tacoma’s rear seats fold flat in a 60/40 configuration, mind you, with a hard plastic backing that’s good for sliding heavy items on top of when rain looks likely, whereas the rear cab wall includes formed plastic storage bins to keep smaller items from rolling around the cab floor.

When upright those seats are quite comfortable for three adults, with ample legroom and what should be enough hip, shoulder and headroom for larger folks too. Up front the well-designed seats don’t need a lot of adjustment to be supportive, the current Tacoma as comfortable inside as it’s ever been. Interior detailing on my tester included a two-tone grey and black theme with a unique dimpled pattern across the black dash facing and door uppers for a high-tech look. Lots of metallic surfaces, featuring a unique pattern on the lower console, added to the classy cabin, while the aforementioned thick leather-wrapped multifunction steering wheel boasted grippy perforated portions and nice thumb spats for sporty comfort, while the leather-wrapped shift knob endows this TRD Sport model with more sport.

On that note my tester’s black and white faced primary instruments looked great and added to its sporty appeal, while the display audio system sounded good and included Bluetooth phone connectivity along with Toyota apps, including messaging.

The seat heaters offered variable control allowing the ideal temperature for any winter occasion, while the unusually intelligent integration of double sunglass holders took care of my Ray-Bans as well as my partner’s Bvlgaris.

To think that all of this comes in a truck that’s due to be replaced within the year is impressive, today’s Tacoma hardly dated inside and out. No wonder it remains a top seller despite new competition, a position it will likely hold on to for decades to come. Tacoma isn’t just the longest uninterrupted nameplate available in the compact/midsize pickup business, but its name is now legendary for delivering superb functionality and bulletproof reliability. Good luck dethroning this one Detroit.
©(Copyright Canadian Auto Press)
Car Shopping Tools