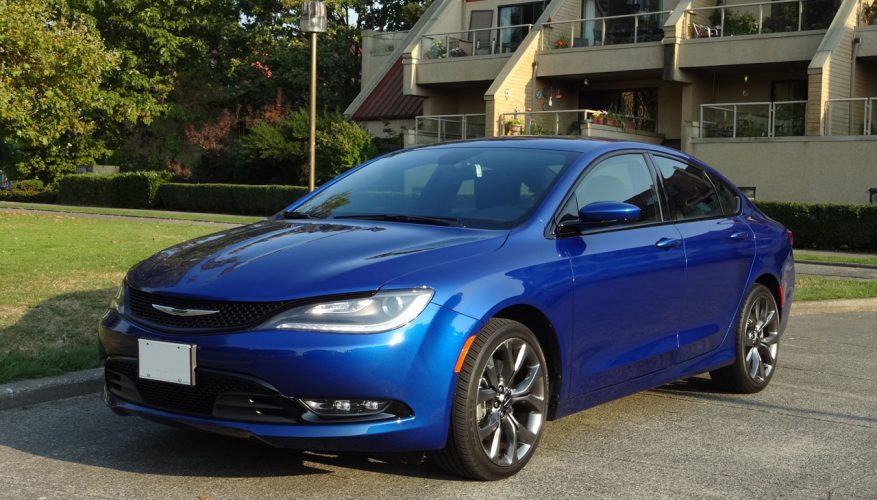 By: Simon Hill
Fully redesigned for 2015, Chrysler’s 200 seems to be on a roll. It grabbed the number-one sales spot in Canada when it first hit showrooms, beating out the Honda Accord, Toyota Camry and Ford Fusion that month. Continued strong sales the following month saw it hang onto third place behind only the Camry and Hyundai Sonata. In the US the 200’s change of fortune hasn’t been quite so dramatic, but it has climbed several notches in the sales hierarchy, going from an also-ran to a top top-six contender.

But it’s more than just that. The new 200 is based on an enlarged version of the architecture underpinning the new Dodge Dart and Jeep Cherokee, which was in turn developed by Alfa Romeo, and this gives Chrysler’s new mid-size sedan something like the soul of a four-door coupe, especially when fitted out in my test car’s 200S AWD trim.

Certainly the 200 has the look down pat, with a nicely proportioned hood, muscular front fenders, gracefully curving roofline, and almost no discernible trunk line at all. Add to this my tester’s bold rear diffuser panel, oversize twin exhausts, 19-inch Hyper Black aluminum wheels, and Vivid Blue Pearl paint, and it adds up to a car with real street presence, a perfect blend of aggressive and sophisticated.

Under the hood, where lower-trim versions of the 200 get a 184-horsepower 2.4-litre four-cylinder engine driving the front wheels, AWD models get a soulful-sounding 3.6-litre V6 that cranks out 295 horsepower and 262 lb-ft of torque. In either case the engine is hooked up to a nine-speed transmission, with the 200S and 200S AWD getting paddle shifters (the model lineup includes the LX, Limited, S and C, with the option of AWD for the S and C).

The 200S AWD gets a sport-tuned suspension to match its big motor, so in addition to sprinting from 0-100 km/h in an impressively quick 6.5 seconds it also carves up the corners with aplomb, offering quick reflexes and good grip – although I did notice it could feel a little unsettled during abrupt transitions. Overall, the 200S AWD’s willing demeanour makes it a distinctly more engaging car to drive than most in the segment. Fuel economy is rated at 12.8 / 8.1 L/100km (city/highway) and my test car averaged about 13.8 L/100km in mostly city driving. For those wanting better economy, the four-cylinder is rated at 10.2 / 6.4 L/100km.

Inside, the new 200 has received plenty of industry praise, including picking up a coveted Wards 10 Best Interiors award. Certainly parts of it are genuinely innovative and overall it’s quite well executed, but I found it a bit plain looking at first glance, with a large expanse of featureless black dash padding and similarly black switch panel surrounds. You also pay a real cost for those swoopy four-door coupe looks, with noticeably less rear seat space than in other mid-size sedans (the trunk on the other hand is well sized at 453 litres and benefits from 60/40 split-folding rear seatbacks). At five-foot-eleven I found my hair brushing the roof in the back, and my six-foot-two teenage son could only fit by slouching, which landed his knees into the front seatback. Even if you clear the curving rear roofline, you’re sure to notice the rather closed-in feel of the rear seat, with the double C-pillar blocking your view both to the side and upward. On the other hand, if you’re trying to escape the paparazzi, a Chrysler 200 might be perfect.

Up front, just like in a real coupe, things are much better. The 200 features soft touch door uppers front and rear, and good quality materials are used wherever you’re likely to come in contact with. The front seats in my test car proved very comfortable and amply adjustable, with tilt and telescoping steering helping to ensure you can find just the right driving position.

The split-level centre console has an open-sided lower shelf for quick and easy storage of small items, and integrates the cupholders into a nifty sliding lid for a hidden bin with the USB port, auxiliary jack and 12-volt outlet inside, and a wiring port to the lower shelf. The only challenge that might arise would be trying to access this bin when the cupholders are in use.

The gear knob is a space-saving rotary dial that looks like it could have been lifted straight off the Jaguar and Range Rover parts shelf, and the blue-lighted round analog speedometer and tachometer flank a big multi-information display. It’s all very current and nicely done, with the only real complaints from an ergonomic point of view being that the A-pillars restrict outward visibility to some extent, and that while the shift paddles look good-sized from the front, they are actually quite small as they share real estate behind the spokes with the radio tuning and volume controls. Trying to shift gears mid-corner invariably resulted in my changing stations or cranking up the volume.

While a 5.0-inch infotainment display is standard, Limited and higher trims are available with a big 8.4-inch touchscreen (included on the 200C) running Chrysler’s UConnect interface, which is slick and intuitive – a good thing given that various climate and comfort controls (such as the seat heaters) can only be accessed through the infotainment interface. Personally I’d like to see a few more well organized switches for direct access to such functions, but then I’ve always been a little old school.

The six-speaker audio system itself (four speakers in the base LX) is suitably powerful and sounds great, plus it features satellite radio (except in LX), AM/FM, USB connectivity, an auxiliary input and … no CD player. That’s right, the CD player, which killed the cassette player soon after it was introduced in 1982, has itself finally been killed off by Chrysler some 33 years later thanks to the ubiquitous usefulness of digital media. I didn’t miss having a CD player in the 200, and I doubt many owners will either (and there’s always the auxiliary or USB inputs for a remote player if you really must play CDs).

At $24,190 (destination in and not including discounts) the base 200 LX comes with a solid lineup of standard equipment, including such things as air conditioning, power windows, power locks, keyless entry, pushbutton start, cruise control, automatic headlights, ambient interior lighting, an electrically-actuated parking brake, tilt and telescopic steering, a tire pressure monitor, and 17-inch steel wheels with covers.

With its stylish looks, willing drivetrain and excellent chassis dynamics the new Chrysler 200 is a family sedan with distinct character in a segment loaded with capable but sometimes indistinguishable offerings. While the Ford Fusion provides attention-getting style and features and the Mazda6 offers a sporty driving experience, buyers who are willing to trade a little rear-seat functionality for a more engaging driving experience would do well to give the Chrysler 200 a close look.
©(Copyright Canadian Auto Press)
Car Shopping Tools