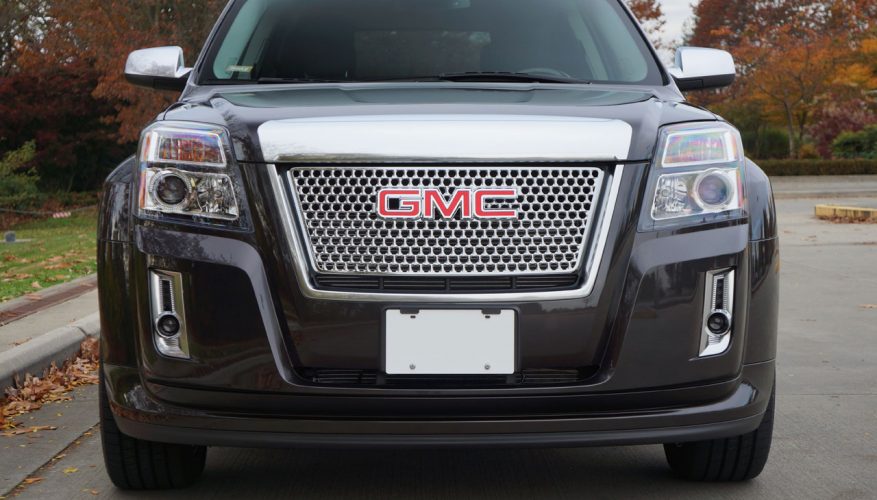 By: Trevor Hofmann
Fifteen years ago GMC had a good idea. Create a high-end near-luxury sub-brand within their SUV line for buyers who want a little more style and luxury. Hence, the Yukon Denali arrived in 1998, a near identical twin of the 1999 Cadillac Escalade and therefore somewhat unique from the regular GMC Yukon, which as most people know shared almost everything behind the grille and headlights with the Chevy Tahoe. The original Yukon Denali’s grille, headlight assemblies, bumpers, fender flares and body cladding were different from the Yukon, while inside it featured high-grade Nuance leather upholstery, heated front and rear seats, a Bose audio system, and real Zebrano wood accents. In comparison, today’s Denali and other GMC models that wear the Denali badge are merely top-line trim levels of mainstream trucks and SUVs. As for GMC’s compact Terrain, which first showed its bold chrome-clad grille in late 2009 as a 2010 model, the Denali model introduced for 2013, makes even less of a visual statement as even the lowest base SLE1 models still manage to grab eyeballs after five years of service.

Yes, no matter the trim level the Terrain’s grille lives up to the Denali moniker, which incidentally was derived from the native Koyukon Athabaskan name for “The High One” in reference to North America’s tallest peak, Alaska’s Mount McKinley. It’s a true mountain of a grille, taller, wider and just plain bigger than anything else in the compact CUV class. In Denali guise it hasn’t changed one iota from 2013, which should be expected after only a year on the market, and won’t be changed for quite some time being that the next-generation D2XX-based Terrain is at the very least one, and quite possibly two years away. This is good for you if you’re planning to purchase one, as its “shelf life” hasn’t gone completely stale, although a great deal has happened within the compact crossover segment since the Terrain was first introduced and therefore simply adding some slightly nicer trim and a few more features doesn’t necessarily add up to true premium status or the Terrain Denali’s suggested asking pricing, let alone help it to measure up to its top-line mainstream peers.

Jump into a new Hyundai Santa Fe Sport Limited, Jeep Cherokee Limited, Nissan Rogue SL or Volkswagen Tiguan Highline and you’ll be double-checking the steering wheel to make sure it’s not branded with a premium badge. On the contrary, other than the nice soft-touch dash pad with contrasting red stitching the Terrain Denali doesn’t effectively hide its Chevy Equinox roots. A hard plastic dash surround and door uppers immediately infer volume brand status, and while the wood on the steering wheel, shifter knob and door panel trim appears as authentic as the SUV’s marketing material says it is, a little more density would make it feel authentic too. Like the exterior there’s a lot of bright chrome detailing inside, some of which trims the knobs and buttons on the centre stack. These are nice and tightly fitted, but there’s a little bit of wiggle and slop that could be better damped. Up above, the roofliner is a nice woven fabric that melds ideally into the sunroof for a finished look, and the roof pillars, while plastic, look like the same woven fabric. They’ve really done a nice job of this, although anything in the premium class has a real cloth wrapping. The steering wheel is very nice however, with excellent quality leather nicely stitched together. It feels good in the hands too, while the perforated leather seats look and feel superb, only topped off by some of the best seat heaters in the business.

Then again, a lot of mainstream competitors let alone premium players include features like ventilated front seats in top-line trim too, plus heated rear seats, a heated steering wheel, automatic climate control with separate passenger settings (some even offering separate rear passenger settings), adaptive HID headlights, LED daytime running lights, and a panoramic sunroof overhead, while almost all offer proximity sensing remote access with pushbutton ignition in top trims, each of these items is not even available with the Terrain Denali. I could go on, with features such as automatic high-beam assist, automated parking assist, and even an electronic parking brake, all available in top-tier volume branded crossovers, but I think I’ve made my point. The Terrain Denali can’t be considered premium if it doesn’t even measure up to many of its mainstream peers, yet it’s the most expensive vehicle available in its class with a base price of $39,935 for front-wheel drive and $41,885 for all-wheel drive, plus $1,550 for freight and pre-delivery prep. My V6 AWD, navigation and trailering package equipped (etc.) tester came to $44,680, which made it more expensive than the new Lincoln MKC, the Audi Q5, BMW X3, and Volvo XC60, not to mention the much larger seven-passenger Infiniti QX60. My Terrain Denali was even pricier than the Cadillac SRX that shares a more robust premium version its Theta platform architecture.

Of course, these true premium utes will quickly exceed the $50k mark and go much higher when equipped with some of the features found on the Terrain Denali (although some come stock with very impressive lists boasting features that can’t be had with this GMC). On that note the Terrain Denali’s standard kit includes high-grade leather upholstery than the SL2, an eight-way powered passenger seat, mahogany wood trim, illuminated sill plates with the Denali logo in bright red, and blind zone alert to go along with some of the other items already mentioned, while it incorporates items already included on the SL2 model just below, specifically driver’s seat and side mirror memory, a powered glass sunroof, ambient lighting in door handles and door storage, a remote garage door opener, a powered liftgate, rear parking assist, lane departure warning, collision warning (with overly sensitive sensors), a chrome grille, chrome mirror housings, chrome door handles, chrome roof rack side rails and a chrome rear skid plate, plus chromed 18-inch wheels.

Features from SLT1 trim that are carried forward include heated front seats and remote engine start, while items from the SLE2 model include the aforementioned leather-wrapped steering wheel, automatic climate control (but only with a single mode), a powered eight-way driver’s seat, IntellilLink infotainment, an eight-speaker audio system with subwoofer, Siri Eyes Free (new for 2014), ambient interior lighting, and tire pressure monitoring.

Lastly, features from that base SLE that are grafted onto the Denali include a chrome grille surround, chrome exterior accents, deep tinted glass on rear doors and cargo area, fog lights, automatic headlights, tilt and telescopic steering, power-adjustable heated side mirrors, air conditioning, steering wheel-mounted audio, cruise and Bluetooth controls, a multi-function trip computer, a backup camera integrated into a seven-inch full-colour touchscreen display (although rear and side visibility is already very good), auxiliary and USB inputs, satellite radio, OnStar (including its useful turn-by-turn navigation system), three-way heated front seats, rear seats that slide and recline, and more. I should also mention that all Terrains come with the usual safety features, such as ABS-enhanced four-wheel disc brakes, traction and stability control, tire pressure monitoring, and the normal count of airbags (which means no front seat knee blockers or rear side-impact airbags).

The 3.6-litre V6 is absolutely silent at idle without any shake or shimmy, and while it doesn’t sound particularly sporty unless in manual mode at high revs, it has a nice note just the same. It certainly pulls well thanks to 301 horsepower and 272 lb-ft of torque at your beck and call (substantially more than the base 2.4-litre four’s 182 horsepower and 172 lb-ft of torque), and the six-speed automatic shifts smoothly, but once again most in the premium sector and many mainstream rivals offer quicker-shifting and more efficient seven-, eight- and even nine-speed automatics. Manual mode is on hand, with a rocker switch on the shifter knob that’s easy to use. Handling is pretty good unless you really push it hard, then again its bias is towards comfort and therefore doesn’t come anywhere close to the sport sedan agility many of its volume branded competitors and most of its premium rivals offer. Like the engine it’s quiet, however, GMC having done a very good job of minimizing road and wind noise.

As mentioned my tester had navigation, and although the infotainment system’s touchscreen isn’t quite as high-resolution as some of its competitors I liked the point of interest capability the system offers. It even shows the logos of Dairy Queen and other fast food chains, not to mention more important locations such as gas station brands. The rest of the GMC IntellilLink infotainment system is easy to use, and the pioneer audio system has excellent sound quality.

As mentioned the seats are very comfortable up front and the same can be said of those in back, plus interior roominess won’t be a problem even for large or tall occupants. The rear seat/cargo system is serviceable if somewhat rudimentary, in that the 60/40-split seatbacks don’t fold complete flat but leave a very big hump where the seatbacks meet up with the load floor (this really isn’t acceptable these days). The cargo tonneau cover is also extremely basic, although it looks rugged and should stand up to the test of time.

The Terrain Denali’s stowage capacity is a major bonus, being on the large side, with a total of 1,810 litres (63.9 cubic feet) available with the rear seats down or 895 litres (31.6 cubic feet) when they’re upright. Its payload allows a maximum of 520 kilograms (1,146 lbs), so if you need to haul more on a regular basis take note that the four-cylinder Terrain can only manage the usual 680-kilo (1,500-lb) trailer this class of vehicle allows. The V6-powered Terrain can tow up to 1,588 kilograms (3,500 lbs) mind you, so it’s the optimal choice if you regularly bring along a small boat or camper.

Fully loaded with passengers and cargo you won’t be able to eke out anywhere near the Terrain Denali’s claimed fuel economy rating of 9.2 L/100km in the city and 6.1 on the highway with front-wheel drive or 10.1 and 6.9 with all-wheel drive in the four-cylinder model, or for that matter the V6 which uses an estimated total of 12.4 city and 8.1 highway with FWD or 13.2 and 8.4 with AWD, although both benefit from less expensive regular fuel.

All in all the Terrain Denali offers a lot of top-drawer features in a brave, brawny design that no doubt appeals to many buyers, but if GMC wants to pass it off as a true luxury player like its hefty price implies, it has a lot of work to do in order to be taken seriously. There are just too many mainstream competitors doing a better job of applying near-premium features, finishings and refinements to their more modern compact CUVs.
©(Copyright Canadian Auto Press)
Car Shopping Tools