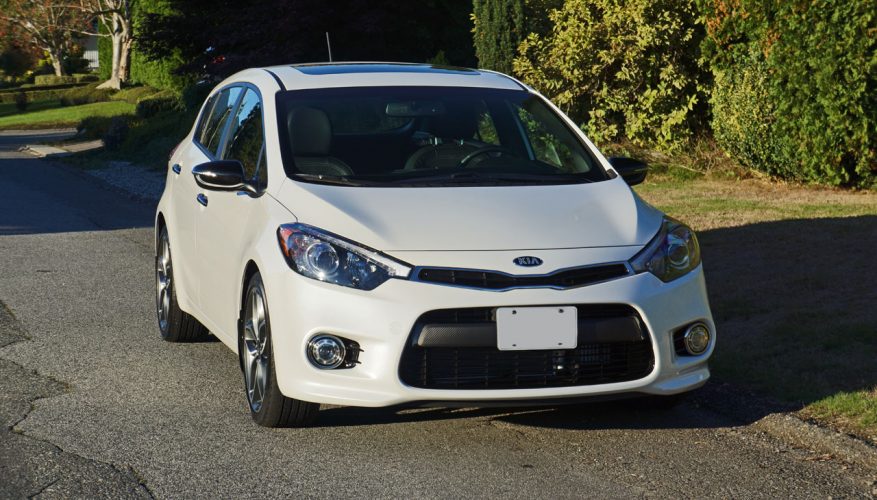 By: Trevor Hofmann
I read in December that Hyundai Motor Corp. and affiliate Kia Motors Corp. just hired Albert Biermann, now ex-chief engineer for BMW’s M performance division, to develop the automaker’s performance models and improve ride and handling overall. Now the South Korean dynamo won’t only have one of the best designers in the industry making some of the best looking cars available, but Peter Schreyer’s rolling sculpture will likely soon get the same wow factor when it comes to driving dynamics.

As for the Forte5, it’s already a pretty impressive performer, especially in top-line SX Luxury trim. That’s the way Kia suited up my tester, and whoa does it look fabulous. Put the Forte5 SX Luxury next to any of its hot hatch competitors and it’ll pull its fair share of eyeballs. A deeply sculpted front fascia filled with multiple chrome and faux-carbon detailed grille openings plus a sweet set of chrome-rimmed LED ‘halo-style’ projection fogs immediately sets the tone, followed up with dazzlingly jeweled HID headlamp clusters encrusted with upscale LED DRLs just above, nothing less than 18-inch twin-five-spoke machined-finish rims wrapped in 225/40 Nexen rubber all-round, plus gloss black LED-enhanced mirror housings that contrast sharply against my tester’s Snow White Pearl paint, chrome-garnished gloss black door handles at all four doors, and finished off by a sleek integrated rooftop spoiler, LED-infused multi-angle lightbar taillights, and black CRP-stylized rear diffuser framing twin chrome-tipped exhaust pipes. This is one superb looking five-door.

What I like most about the Forte5 SX’ design is that it’s not trying too hard to grab your attention. It’s completely devoid of go-fast boy racer aero add-ons, loud racing stripes or any other types of look-at-me kit, but rather it goes about making a good impression by following good, solid design principals that ultimately result in a sporty yet classy styling statement from front to rear.

Opulence in a compact produced by a volume producer? That’s right. Kia is shaking up the status quo big time, delivering the kind of features that would make a compact premium branded car push upwards of $50k, and delivering more luxury-level refinement than most of its mainstream peers. The Kia Forte5 SX Luxury doesn’t even break $30k, mind you, hitting the road at $28,795 plus $1,485 for freight and pre-delivery prep, whereas a well-equipped base Forte5 LX can be had for only $19,495.

If you think everything you’ve heard so far sounds good, just wait until I list off all of the gear you get added on from the regular SX trim level. How does proximity sensing Smart Key with a pushbutton ignition system sound? A dual-zone automatic climate control system? Yeah, I thought you’d like that. I’ve already mentioned some of the SX model’s other features, but neglected to tell you that those 18-inch rims surround a set of larger 300-mm (11.8-inch) front brakes and ride on a sport-tuned suspension setup. I’ve told you about the sport front bumper with larger lower air intake, gloss black mirrors and exterior door handles, fog lights, LED taillights and dual stainless steel sport-tuned exhaust system, but didn’t mention the aero blade wipers, welcome lighting system, alloy pedals or cooling glove box. Does the Forte5 SX seem like the kind of place you’d like to spend your daily commutes? Thought so.

Along with everything above, SX Luxury models also get a lot of the equipment that comes standard on the EX, such as a really nicely shaped leather-wrapped steering wheel, a leather-wrapped shift knob, an auto-dimming rearview mirror, automatic power-folding exterior mirrors, the UVO infotainment system which integrates a rearview camera, plus automatic headlights, a rear centre armrest, LED positioning lights, and Kia’s FlexSteer customizable steering system.

Feel free to exhale a collective whew! When Kia decided it wanted to make a major dent in the market, it wasn’t messing around. There isn’t another volume manufacturer in the compact five-door segment that comes anywhere near as well outfitted as the Forte5 SX Luxury, except Hyundai and its top-line Elantra GT, but the fun doesn’t stop here, it’s only just beginning.

Behind the Forte5’s trademark grille is a very potent turbocharged, direct-injection, 1.6-litre four-cylinder engine with dual cam variable valve timing that makes a maximum of 201 horsepower at 6,000 rpm and 195 lb-ft of torque between 1,750 and 4,500 rpm for extremely spirited acceleration no matter where the motor’s spinning within its rev range. It comes mated to a six-speed automatic transmission when the SX Luxury trim is checked off, which is right about where I’m hoping Herr Biermann enters the picture and says something along the lines of, “Vut ver you tsinkingk?!” to his new product planning teams. Yes, it’s a crime you can’t get the wonderful six-speed manual that comes standard with the regular SX with the top-line SX Luxury, but at least Kia has added a nice set of properly sorted paddles to the Forte5 SX Luxury’s assortment of steering wheel switchgear so that a healthy dose of hands-on engagement can be employed. It’s a very good six-speed automatic too, shifting quite crisply for the class without being the slightest bit harsh, but it’s the aforementioned steering wheel’s FlexSteer customizability that might cause more to sit up and take notice.

Yes, once again we’re talking about a compact Kia here, not a BMW M car or any other performance-oriented premium machine. EX models and above come standard with the FlexSteer customizable steering system as part of the standard electric power steering setup, and it’s an impressive bit of kit. It features three selectable modes, Comfort, Normal and Sport, all accessible via a button positioned just above the group of cruise control switches on the right side of the steering wheel. Comfort is possibly good for some of the poorly paved highways I’ve driven in various parts of the world (Quebec maybe?) that almost have the ability of yanking the steering wheel from your hands when really big potholes and frost-heaves (bumps) come in contact with the front tires, but I certainly never found a use for it where I live. Normal is just fine for tooling around town or meandering down our near perfectly smooth highways, but any performance driving requires the more reactive qualities of Sport mode, where I left it most of the time.

On that note the Forte5 SX is a hoot around corners, although there are others in this class that can be pressed harder with less tire squeal and more poise. For the majority of drivers its handling will be more than good enough to impress, but for those just hopping out of a VW GTI, Honda Civic Si, or glory be a Subie WRX STI or Mitsu Evo, just enjoy a relatively quick ride and all the fabulous features your cars can’t be had with. While Mr. Biermann might be primarily working on performance models, and to that end I’m thinking rear-drive near-luxury cars, here’s hoping that his influence, at the very least, will trickle down to the automaker’s lesser front-drive lineup. Don’t get me wrong as the Forte5 SX is very good through the corners, but how great it could be.

It’s a practical car too, by the way. The Forte5’s four doors and rear hatch make for good passenger and cargo flexibility, the front and rear seats plenty roomy for four and easily wide enough for three abreast across the rear as long as you’re loaded up with middleweights instead of super heavyweights. As per usual the rear seats fold 60/40, allowing its minimum of 657 litres (23.2 cubic-feet) of cargo space to expand into the passenger compartment for longer items.

Practicalities in mind, the Forte5 SX Luxury is EnerGuide rated at a claimed 9.7 L/100km in the city and 6.7 on the highway, but don’t expect anything close to that in real-world driving. My results were closer to the U.S. EPA’s combined rating of 9.8 L/100km, which is par for the course in this hot hatch class.

As you may have gathered from my enthusiastic tone, the Forte5 SX Luxury is anything but par for the course in most other capacities. It’s a leader in design, interior refinement, features and more, while delivering fun-filled performance and good economy. A little suspension tuning by the automaker’s new engineering maestro and the availability of a manual gearbox in top trim will make it just about perfect. All I can say is for all the aforementioned hot hatch legends to keep their eyes on their rearview mirrors, because a superior Kia will soon be gaining on them.
©(Copyright Canadian Auto Press)
Car Shopping Tools