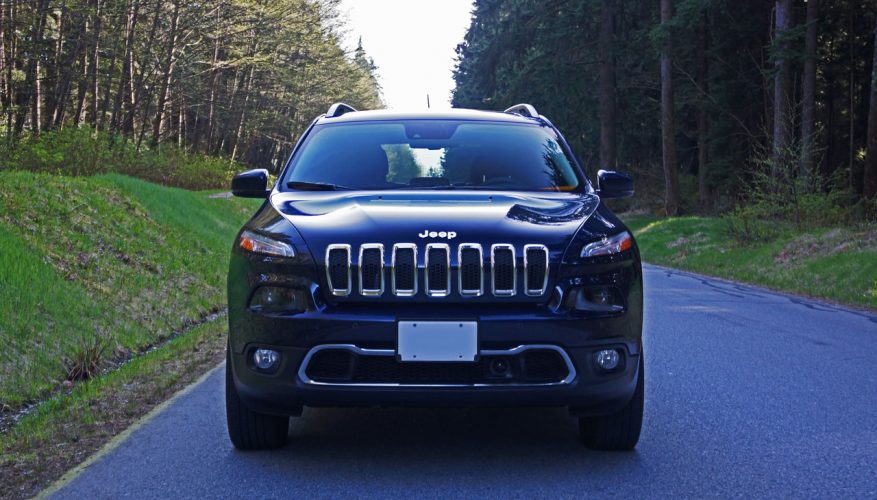 By: Trevor Hofmann
Now this is a fresh looking design. From its windswept seven-slot grille to its unique LED-enhanced headlights that sit high atop the front fenders, there’s really nothing else anything like the new Jeep Cherokee on road. Likewise from the rear, where its taillights are positioned high, just below the rear window, it stands out from the regular compact CUV crowd. The same goes for the Cherokee’s interior, especially in Limited trim where it looks more akin to something from uppity Range Rover than down to earth Jeep.

I remember the days when you slid behind the wheel of a compact Jeep and things were much more rudimentary. I worked for an AMC (American Motors Corporation) Renault dealer way back in 1984, and the big sellers then weren’t the French brand’s cars, its then-new Alliance impressive compared to a Chevy Chevette, but lagging behind Japanese competitors, and certainly nothing branded with the AMC logo sold very well (although a V8-powered, manual-shifted “sub-compact” Spirit AMX hatchback was loads of fun to drive), but rather the “new” Cherokee was all the excitement back then.

Prior to compact 1984 Cherokee (XJ), the previous SJ Cherokee was based on a full-size J-series pickup truck just like sport utes from Ford (Bronco) and GM (K5 Blazer and Jimmy) and shared most of its styling sans side wood paneling with the Grand Wagoneer, so the new advanced unibody XJ Cherokee was a breath of fresh air, a lightweight design that combined Jeep’s legendary off-road performance with decent get-up-and-go and either of its GM-sourced engines, which started with an “Iron Duke” 2.5-litre four and was topped off by a 2.8-litre V6, plus of course it achieved much better fuel economy than the old SJ. Even better, in 1987 Jeep introduced a 4.0-litre inline-six that was a real powerhouse for the time, with stump-pulling levels of torque.

Jeep has changed hands multiple times since its AMC Renault ownership, having become part of Chrysler Group in 1987, which bought up all that was left of AMC when Renault eventually abandoned it, mostly to acquire the Jeep brand of course. Daimler wanted Jeep so badly it “merged” with Chrysler Group in 1998 to form DaimlerChrysler, and after purging the U.S. division for its cash reserves and pretty much leaving it for dead it was handed off to Cerberus, a venture capital firm, after which its parent company was restructured and renamed Chrysler LLC as it emerged out of bankruptcy in 2007 and was purchased by Fiat in 2009, which now goes by the name of Fiat Chrysler Automobile. Jeep remains the star of FCA’s U.S. component, and the new Cherokee shows just what the two companies are capable of when they combine forces.

It certainly doesn’t look like it rides on the components of an Alfa Romeo, but just like the recently introduced Dodge Dart this new Jeep Cherokee’s heart is Italian, if not its soul. Then again the heart of a car is usually referred to the engine, and the wonderful 3.2-litre Pentastar V6 in my tester is American through and through, although the base Cherokee’s 2.4-litre Tigershark MultiAir four-cylinder is Italian, pulled from the very same Alfa Romeo brand that underpins the Jeep’s overall architecture. It makes 184 horsepower and 171 lb-ft of torque compared to the V6 engine’s 271 horsepower and 239 lb-ft of torque, which is good for a base engine but I’m never one to say no to more power. The 3.2-litre V6 engine’s performance is refined and seemingly relentless, while shifts from the highly efficient nine-speed automatic transmission are unperceptively smooth when cruising around town or on the highway, and immediately reactive to throttle input when passing power is needed.

This is a good place to mention that the new Cherokee has improved on the old Cherokee’s fuel economy, which wouldn’t be too difficult to do considering the numerous advancements made to the internal combustion engine and all other automotive components (multi-speed electronic transmissions, electric power steering, etc.) since that now classic model left the market in 2001 (note that the Cherokee never really left the market outside of North America, where our Liberty wore the classic Jeep moniker). Despite leaving the market only last year, the Liberty’s fuel economy wasn’t all that hard to beat either, the new Cherokee rated at 9.6 L/100km in the city and 6.4 on the highway in its most efficient four-cylinder front-wheel drive layout; 9.9 city and 7.0 highway with the same engine and four-wheel drive; or 10.0 and 7.3 with the identical engine and Jeep’s Active Drive II four-wheel drive system. The best V6 fuel economy is also with the front-drive version at 10.8 L/100km city and 7.0 highway, while the 4×4 model achieves a 11.1 city and 7.4 highway rating, and the V6 with Active Drive II, the same model I drove, is the least efficient at a claimed 11.1 L/100km city and 7.7 highway. Keep in mind that these ratings will look less optimistic for the 2015 model year due to the new Transport Canada five-cycle testing process, although a new start/stop system that will shut the engine down when it would otherwise be idling, standard with the V6, should help improve the model’s real fuel economy.

Where Jeep’s old French owner heavily influenced the classic 1984 Cherokee’s unibody design, the new Cherokee’s unibody hails from Italy. The Fiat Compact platform architecture was first used to underpin the Alfa Romeo Giulietta in 2010, albeit later in 2012 it was put into use for the aforementioned Dart and Fiat Viaggio/Ottimo, plus more recently the Chrysler 200. It was conceived to be used for small family cars and large family cars (compact and midsize cars) with front-wheel or four-wheel drive layouts, and will soon be the basis for a yet to be named compact Jeep crossover expected to replace the Compass and Patriot models in 2016, while a long-wheelbase version will carry the weight of the next-generation Chrysler Town & Country (the Dodge Grand Caravan is being phased out), Dodge Journey replacement and likely another Chrysler branded crossover SUV. Future FCA plans aside, the Fiat Compact platform (or C-Evo as it’s also known) works perfectly under the new Cherokee, producing an extremely smooth ride that’s as ideal for irregular inner city pavement as it is trekking over gravel roads and even more adventurous trails. It’s also confidence inspiring around corners, at least for a relatively tall crossover with off-road capabilities.

On that note, in my Active Drive II equipped tester a rotating dial dubbed Selec-Terrain sits next to the console-mounted shifter allowing you to flick from Auto mode through Snow before hitting Sport, after which a Sand/Mud setting can be initiated for tougher terrain. Atop the dial there are two buttons, one for hill decent control and the other for a 4WD Low setting, necessary to overcome the really rough stuff.

No matter how challenging the outside environment gets, those inside the Cherokee will feel properly pampered, my Limited trimmed tester looking and feeling more Solihull (Land Rover/Range Rover) than Toledo. The luxuriously lined Cherokee is built next to Jeep’s stalwart Wrangler, but other than the seven-slot grille and its carrying on a tradition of off-road worthiness the two have very little in common. Where the Wrangler is purposely back-to-basics, the Cherokee is about as refined as compact SUVs get in the mainstream sector. It sounds cliché but, with such impressive near luxury brands like Jeep putting out such excellent machinery such as this Cherokee Limited, why pay tens of thousands more for a premium badge? The Jeep name has plenty of cachet all on its own, and this little SUV is impressively finished with soft-touch surfaces everywhere you’d hope them to be, plus its hardly short on features, even including a number not available on luxury models.

Along with these upscale features the Cherokee included some unusually helpful conveniences such as a fold-flat front passenger seat for loading extra-long cargo, not to mention passenger in-seat storage for hiding away valuables. Additionally, the Cherokee included a cargo management system on the driver’s side rear cargo wall that lets you securely attach an available cargo bin, cooler, first aid kit, off-road accessory kit, etc.

My tester went a couple of steps further by adding every available option, such as the $1,495 Luxury Group that includes HID headlamps, premium leather upholstery in a unique two-tone dark blue and brown design, ventilated front seats, two-way driver’s seat, radio and side-mirror memory, and a powered liftgate; the $1,795 Technology Group that adds rain sensitive wipers, adaptive cruise control with Stop & Go, automatic high beam control, parallel and perpendicular park assist with an auto-stop feature, Advanced Brake Assist, Blind Spot & Cross Path Detection, Forward Collision Warning, and Lane Departure Warning Plus; the $495 Trailer Tow Group with its seven and four pin wiring harness, Class III receiver hitch, and full-size spare tire; $100 wireless charging pad; a $1,495 CommandView dual-pane powered glass sunroof with powered sunshades; and finally a $550 navigation system, $225 single-disc CD player and nine amplified speakers with a subwoofer for $400. The total bill, which included $9,300 in options, brought the Cherokee Limited 4×4 into premium territory at $41,695 plus $1,695 for freight and pre-delivery prep. Note that the Cherokee Limited starts out at just $30,195, while the base Cherokee Sport can be had for $23,695; the latter number impressive considering that the inherent goodness of this SUV is included.

You might have noticed that the price of my tester and the Limited model’s starting price is more than the $9,300 in options I quoted, which occurred because the final options tally didn’t show the V6 engine and Active Drive II four-wheel drive system, a $2,745 upgrade. On that point, I appreciate that you can purchase a Limited model with either the fuel-efficient four-cylinder engine or the more powerful V6, both available with front-wheel drive or four-wheel drive, which means that a full measure of luxury can be had without the need to pay extra for fuel if you don’t need all the power of a V6 or the all-weather, go-anywhere advantages of a 4×4. Incidentally, the other 4×4 system is Jeep’s Active Drive I with a single-speed power transfer unit and automatic 4WD, likely all most Canadians will need. It features the Selec-Terrain controller with Auto, Snow, Sport and Sand/Mud settings just like the top-tier system, but forgoes a low gear ratio.

I’ve probably gone too far in detailing out the new Cherokee, but truly it deserves all the attention I’ve doted on it and much more. It was good enough to earn the Automobile Journalists Association of Canada’s 2014 Canadian Utility of the Year Award, and while I’ve only just lived a week with the Limited 4×4 V6 model, I have a pretty good feeling the rest of the lineup has a lot to offer too. More than worthy of the legendary Jeep and revered Cherokee nameplates, the new 2014 Cherokee is a very impressive SUV.
©(Copyright Canadian Auto Press)
Car Shopping Tools