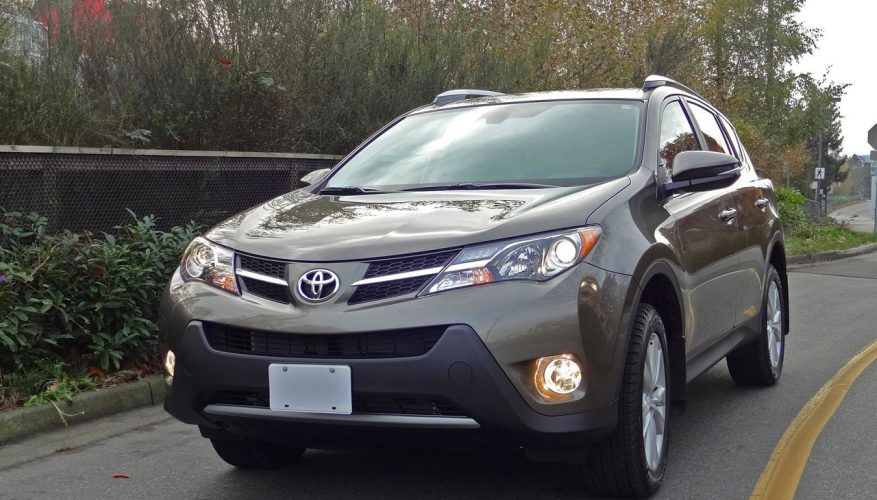 Chasing after these sales is a wide array of rivals including heavy-hitters like the Nissan Rogue, Hyundai Santa Fe Sport, Jeep Cherokee, Mazda CX-5 and, of course, the Toyota RAV4, which by mid-December was tracking for a solid second-place finish in the 2014 sales race, ahead of the Honda CR-V and just behind the top-selling Ford Escape.

That kind of success depends on doing all of the important things right, and the Canadian-built RAV4 certainly delivers where it matters. It’s roomy, comfortable and nicely thought out, its proven powertrain offers reasonable performance with decent fuel economy, and ultimately it has very few real flaws. If words like "practical," "sensible," "dependable," and "value" grab your attention, the RAV4 has lots to offer.

On the other hand, if words like "engaging," "sporty," "powerful," and "distinctive" are what pique your interest, you may find that the RAV4’s easygoing demeanour leaves you wanting more. Toyota’s little CUV offers one sensible engine choice to the Escape’s trio of available powerplants. Its handling is composed rather than dynamic (yes, it’s a CUV, but so are the Mazda CX-5 and Volkswagen Tiguan, and they both manage to ladle up a fair helping of sportiness). Its styling is pleasant and unobtrusive instead of eye-catching.

The current, fourth-generation RAV4 debuted for the 2013 model year and has carried on essentially unchanged since. While the previous-generation RAV4 offered a V6, the sole engine offered in the current generation is Toyota’s ubiquitous 2.5-litre inline four with VVT-i variable valve timing. This engine is shared with the Camry and Scion tC, and in the RAV4 it churns out 176 horsepower and 172 lb-ft of torque. It’s hooked up to a six-speed automatic transmission and will haul the 1,600-kg CUV to 100km/h in about nine seconds. So it’s not slouchy, but it’s not fast either.

On the road, I found the powertrain willing and generally well refined, although the engine’s exhaust note is perhaps a bit hollow sounding. The electronically controlled transmission offers three modes: Eco, Sport and Normal. As might be expected, in Eco mode the transmission upshifts early for the best possible fuel economy and resists downshifting unless you prod fairly deeply into the throttle. Sport mode creates a sharper and more responsive driving experience with later upshifts, eager downshifts, and quicker throttle response – again, no surprise there. What I did find a little unexpected was that Normal mode, which straddles the middle ground between Eco and Sport, was actually my least favourite setting, mostly because it’s neither fish nor fowl, and constantly switches between trying to be economical and responsive. So in Normal mode the transmission upshifts quickly for economy, but then downshifts at the slightest prod of the throttle, making the drivetrain feel indecisive.

Unfortunately it’s not really an option to leave the transmission in Sport mode because it then reverts to Normal mode on restart. Eco mode, on the other hand, will stay selected even after restarting, so I just left it there and enjoyed the ability to urge the RAV4 gently forward without prompting an immediate downshift (it’ll still drop a gear and get its hustle on if you really give it the boot). This netted me fuel consumption of about 11.5 L/100km in the city and 9.3 L/100km on the highway – not quite as good as the rated five-cycle figures of 10.7 / 8.3 L/100km (city/hwy) for the AWD model, but not too far off.

In terms of ride and handling, the RAV4 leans towards the comfort side of the spectrum. It tracks well and has decent road-holding abilities, but there’s a certain amount of roll in the corners and pitch under heavy braking. Most drivers won’t notice this during normal driving though, and will instead appreciate the RAV4’s ability to absorb bumps and smooth out rough pavement. Get an AWD model and those abilities extend to include easily powering through snowplow drifts and scrabbling out of slippery spots. The RAV4 uses Toyota’s Active Torque Control AWD system, which runs in front-wheel drive mode most of the time, and feeds power to the rear wheels as conditions dictate. A switch on the dash lets you lock in power to all four wheels below 40 km/h in low-traction situations.

Inside, the RAV4 is well assembled and nicely finished for this segment, especially in my test car’s Limited trim, thanks to its padded centre dash section with contrast stitching (this part of the dash is a urethane rubber material on LE models). The armrests are also padded, while the rest of the interior is built from (mostly) good-looking rigid plastics. The one exception in my mind is the fake plastic carbon-fibre trim on the console and door pulls which looks, well, fake and plasticky.

Ergonomically speaking, most of the controls are right where you expect them to be and fall easily to hand. Again there’s an exception, that being the controls under the RAV4’s prominent dash pad – they’re a bit of a reach, and they can be well hidden in the shadows during the day, making it a bit of a fumble to control your seat heater or change transmission modes.

I found the driver’s seat perfectly comfortable for my five-foot-eleven frame, even after three hours behind the wheel. The back seats offer plenty of legroom so I could "sit behind myself" with ease, and it has 60/40 split-folding and reclining seatbacks. One shortcoming compared to the Honda CR-V is that there’s no seatback releases within reach of the hatch, so you have to go around and open the rear doors in order to fold the seats (and you also have to remove the rear headrests unless the front seats are adjusted well forward).

On the subject of the rear hatch, the optional power liftgate takes a good long time to open and close (seven seconds to open, and eight seconds to close) and you can’t override it by shoving on it manually. You can, however, easily set the opening height if you’re in an area with restricted headroom, so that’s good. Also good is the roomy cargo compartment, which provides 1,090 litres of space with the rear seats in place and 2,080 litres with the rear seats folded. A retractable tonneau cover keeps your luggage hidden from prying eyes, and my test car included a handy cargo net to hold small items up out of the way.

The base RAV4 LE starts at $25,695 including the $1,690 destination fee for the front-wheel drive model, and includes air conditioning, power locks and windows, cruise control, tilt and telescoping steering, 17-inch steel wheels, and a four-speaker AM/FM/CD/MP3/WMA audio system with Bluetooth connectivity, auxiliary input and USB plug. Choosing AWD raises the price to $27,960 with destination.

The XLE starts at $30,030 (destination in) for FWD, and $32,230 with destination for AWD. It adds features such as dual-zone automatic climate control, power moonroof, heated sport bucket front seats, soft-touch dash pad, backup camera, cargo cover, alloy wheels, rear privacy glass, automatic headlights, fog lights, and an upgraded 6.1-inch display audio system with six speakers and satellite radio. My one comment regarding the display audio system is that many of the touch point controls are quite small, with the rectangular radio preset buttons being among the worst – it would make a lot more sense to have six square buttons in a two-by-three array rather than a stack of six excessively wide but extremely thin buttons, which are difficult to press accurately in a moving vehicle.

Overall, for shoppers seeking a small crossover the RAV4 is a must-see contender, a well-rounded and thoroughly practical yardstick against which other small crossovers continue to be measured. With its spacious interior, comfortable ride and reasonable efficiency it continues to win over buyers looking a family vehicle that will prove itself not simply during a brief test drive, but over years of road trips, grocery runs, commuting and whatever else you throw at it.