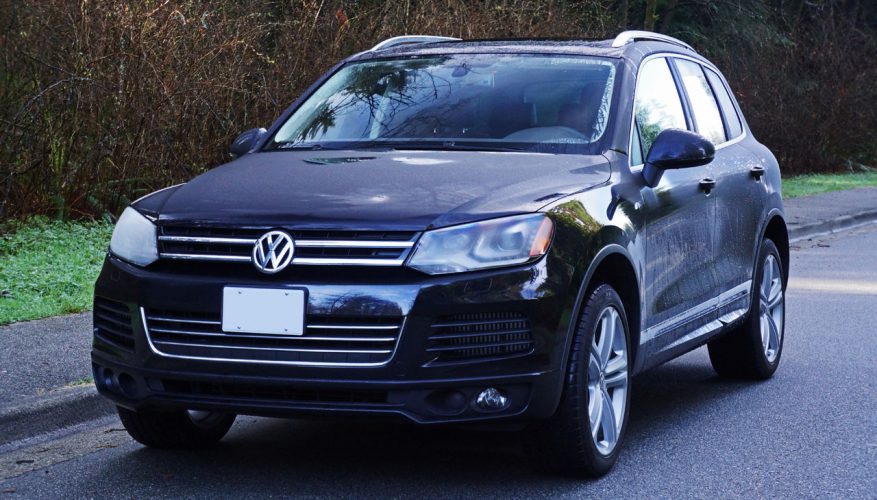 By: Trevor Hofmann
My partner and I stepped up into our Volkswagen Touareg TDI test vehicle and both breathed out a collective “Whew!” It’s beautifully finished inside. This is nothing new for the Touareg, however. It shares underpinnings with the Audi Q7 and Porsche Cayenne after all, a platform architecture that will soon host ultra-premium marque Bentley’s upcoming SUV and may also bear the weight of an off-road capable Lamborghini. That’s quite the fraternity to belong too, but humble VW wears its pin well.

For all points and purposes the Touareg is Volkswagen’s flagship model in North America, the six-figure Phaeton (which incidentally shares its undercarriage and more with the Audi A7 along with the Bentley Continental and Flying Spur) long since eliminated from this market. Starting at $50,975 plus $1,600 for freight and pre-delivery prep, the Touareg’s base price nudges up against the Volkswagen CC’s full-load price of just under $52k. The little Tiguan, which starts at a hair under $25,000, barely breaks through the $40k threshold in top-tier trim. My Touareg TDI Execline with the sporty R-Line package, on the other hand, was appropriately flagship priced at $69,350 including freight.

At first thought you might utter under your breath something along the lines of, “70 grand for a VW?” And to anyone unfamiliar with that aforementioned Phaeton, or for that matter the Deutschland-exclusive VW Transporter T5 van with a Bentley-fitted interior that sold new for around $160k, it might seem like a lot for one of the peoples’ cars. Granted the majority of VW Canada’s sales are made up of Jetta, Golf and Passat models as far as sedans, hatchbacks and wagons go, with Tiguan following close behind the Passat (or just ahead depending on the year). Touareg sales are tiny in comparison, less than a tenth of the Jetta’s numbers and only 37 units from being as exclusive as the Porsche Cayenne last year. So let’s just say the Touareg is special and totally deserving of its lofty price tag.

Using Volkswagen and Porsche in the same sentence might be ok when referencing shared components, but usually that’s where we draw the line. I might have compared these two in previous years, but the new Cayenne is a brilliant piece of performance-luxury engineering and therefore deserves to be left out of this conversation. Just the same, the fuzzy lines between mainstream volume brands and luxury or premium marques is getting more and more difficult to distinguish these days, Volkswagen one of the forerunners in this regard, upsetting the status quo years ago with absolutely brilliantly finished vehicles that are accepted by those in the know as full-fledged premium models, like that Phaeton I mentioned a couple of times already, and of course this Touareg. If the Phaeton hit the market today it wouldn’t only be up against the German luxury sedan standard bearers that include Mercedes-Benz, BMW and Audi, but also Porsche with its Panamera at the top end and new rear-drive V8-powered full-size luxury flagships from Hyundai and Kia at the lowest end, not to mention Lexus and Jaguar in the middle. We can only hope VW brings the Phaeton back, albeit at a price aligned more so with the Koreans, but I digress.

Blurred lines between mainstream and premium aside, Volkswagen’s Touareg is one of the best crossover SUVs you have the opportunity to own at any price. For 2011 the Touareg was completely redesigned, adopting VW’s new corporate face that replaced the model’s heavily chromed semi-oval grille with a narrower albeit much wider opening filled with two chromed slats. The headlights lost their centre bulges and became sharply creased and accented with LED DRLs, while the general shape of the crossover became longer, lower and leaner looking. Nobody complained about the updated model’s styling, although some were miffed by its lack of true low-range off-road gearing.

Take a look at those previously mentioned sales numbers, however, and it’s clear that the majority of buyers could care less about trekking through the wild unknown. Sales more than doubled the first year of this generation to 1,618 units, grew again in 2012 to 1,975 units, and improved once again for 2013 with 2,087 more Touaregs on Canadian roads. And after 11 months of 2014 its YTD sales of 2,114 units have already exceeded last year’s total resulting in another banner year.

As far as luxury flagships go, the Touareg is somewhat understated, even with the optional R-Line upgrades. These include a front, side and rear aero package, a unique rear rooftop spoiler, chromed oval tailpipes, and a sport suspension riding on a set of twinned five-spoke 20-inch Mallory alloy wheels, plus inside it gets a three-spoke sport steering wheel with paddle shifters, alloy foot pedals, genuine aluminum interior trim throughout, and aluminum doorsills, although it removes the handy foot-activated Easy Open function from powered tailgate.

That powered tailgate is standard, by the way, but before I delve into the long list of standard Touareg items it’s best I point out some features on this top-tier Execline. First off, my tester included a powered steering column with memory, a fabulous sounding 620-watt 12-speaker Dynaudio digital audio system, heatable rear seats, rear side sunshades, LED taillights, and 20-inch alloy wheels on 275/45 R20 all-season tires.

The Touareg includes all of the expected safety gear too, although it doesn’t offer all the airbags that some rivals do. Intelligent Crash Response System (ICRS) is standard, though, as are anti-whiplash front head restraints, tire pressure monitoring, ABS-enhanced four-wheel discs, traction and stability control, hill descent control, and engine brake assist.

All of these features come in handy during cold winter months and their often-slippery road conditions, the Touareg one of the most capable of its kind in inclement weather. Part of any vehicle’s overall safety net of features is its ability to avoid potential accidents via good road manners, and along with the electronic driving aids shown on the list above is a chassis replete with inherently adept handling. My test week was wet and soggy every day, as noted by this review’s accompanying photos that show a rain-soaked version of what would otherwise be a very classy black Touareg TDI Execline. The weather, while hardly conducive to outdoor activity, was an ideal backdrop for the Touareg’s all-season capability.

If you want a midsize crossover that eggs you on when the road starts to wind, VW’s entry is one of the near-premium segment’s most sporting, with real performance sedan-like handling from its fully independent double-wishbone front and four-link rear suspension setup, aided by VW’s adaptive torque distribution-infused 4Motion all-wheel drive and backed up by a braking system that won’t fade away after multiple full-stomp applications, like most others do in this class.

The optional TDI power plant is an ideal companion to such agility, its 406 lb-ft of torque so relentlessly powerful, its maximum twist available from as low as 1,750 rpm, and brilliantly smooth Tiptronic manual mode, Dynamic Shift Program (DSP) and sport mode enhanced eight-speed automatic transmission so readily capable of maintaining ideal engine revs to maximize acceleration, that it’s no wonder a gasoline-powered V8 is no longer on the Touareg options menu. The engine makes 240 horsepower too, but I only mention this as a side note because it hardly matters. Torque is king amongst heavy crossover SUVs, and the Touareg TDI is totally and completely dominant in the near-premium midsize CUV segment.

A feeling of utter confidence is what you’ll get from behind the wheel, while everyone else aboard will just be enjoying the scenery as it blurs past, ensconced in a serenely quiet cabin that exudes quality in every detail. It’s sizable too. Amply comfortable for five with plenty of room for cargo in back, the luggage area measuring 909 litres (32.1 cubic feet) with the 60/40 split-folding rear seatback upright and 1,812 litres (64.0 cubic feet) when laid flat. A centre armrest with a centre pass-through offers rear outboard seating for two while skis or other long items are placed in the middle, while a standard retractable cover hides valuables from prying eyes.

Practicalities in mind, one of the Touareg TDI’s most appealing features is its overall efficiency at the pump, and while fuel prices might be low for the time being, most of us don’t expect Christmas to last forever. Compare the TDI’s rating to competitive gasoline-powered midsize SUVs and you’ll immediately understand what I’m talking about, this model’s claimed Transport Canada rating estimated at 10.8 L/100km in the city and 6.7 on the highway, and unlike most 2014 ratings the diesel can actually deliver close to its as-advertised promise.

The Touareg TDI on the whole, however, delivers on a much higher scale than you’ll likely expect unless you’re already familiar with its premium-level experience, but it does so at a price that comes in at thousands less than its similarly featured German “rivals”, due to its commoner peoples’ car status. That’s a formula that makes sense for me, and as it appears thousands of other Canadian consumers.
©(Copyright Canadian Auto Press)
Car Shopping Tools