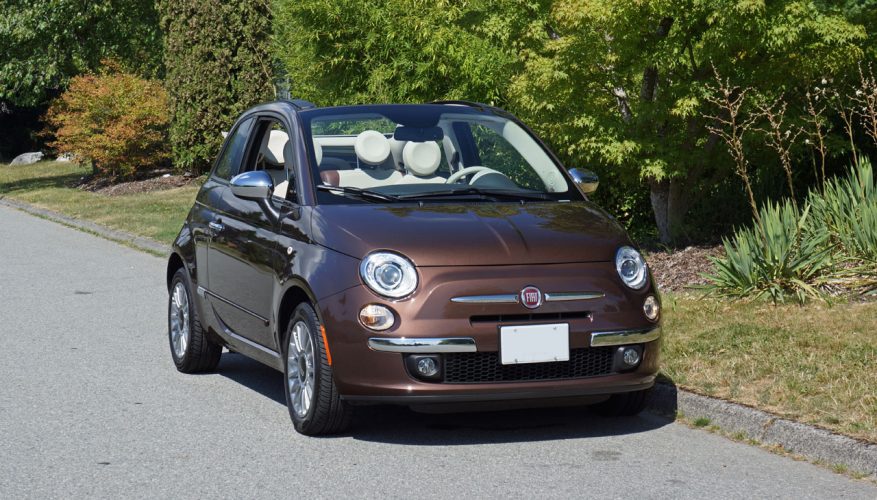 By: Trevor Hofmann
What’s the cutest car available in Canada? Some might point to the Smart Fortwo, simply because it’s outrageously small, or Scion’s more oddly angular shaped although slightly larger iQ for the same reason, but the even larger yet still tiny Fiat 500 would probably be most peoples’ first choice.

Fiat got the proportions just right when the Dante Giacosa-designed Cinquecento initially hit the European market in 1957, helping to make the impish rear-engine two-door one of the best selling cars on the Continent with 3,893,294 units sold throughout its 18-year tenure, and did so once again albeit 50 years later in March of 2007 when it presented the current completely redesigned Type 312 retro version at the Geneva auto show. I was there to witness (and ride on the ultimately-cool indoor rollercoaster with 500-styled cars that Fiat created for the show), and saw first-hand how even jaded journalists went gaga for the adorable little city car.

Ahead of 500s hitting European dealerships, on July 4 of the same year Fiat gave the little car the biggest launch party that any automaker had thrown in more than a decade, displaying it in the main squares of 30 Italian cities with more than 250,000 people in attendance. The 500 went on sale in September 2007 and then arrived on our shores much later in 2011 as a 2012 model, after first being shown at the 2010 North American International Auto Show in Detroit and then getting a production start almost a year later in December. The semi-convertible 500C tested here arrived in North America the same year, although hit the European market in 2009.

Fiat 500 history lesson accomplished, just what makes the 500 so appealing? As mentioned its styling somehow straddles the fine line of cute as a puppy adorability and really cool sport compact depending on how its coloured, trimmed and packaged, with some appealing more to the fairer sex and others, especially the sporty Abarth editions, even enticing the overly machismo Y-chromosome gene-set – the Euro-only 2009 Barbie version, not so much. My 2014 500C tester took a classier route that will likely work for average types of either sex, finished in Espresso with a no-cost Beige cloth top and Marrone (brown) and Avorio (ivory) interior trim, a metallic brown and cream combination giving the little drop-top more elegance than anything of its pint sized dimensions should be capable of.

This elegance might have as much to do with its non-standard Lounge trim, mind you, an upgrade that’s so thorough it leaves little on the options menu. Added to standard Pop trim, which starts at only $16,495 plus $1,695 for freight and pre-delivery prep making the 500C Canada’s lowest priced convertible, and includes powered locks with remote access, powered windows, powered and heated side mirrors, tilt steering, six-speaker AM/FM/CD/MP3 audio with aux and USB ports, a rear spoiler, bi-functional halogen projector headlamps, a tinted windshield and windows, chrome door handles and exhaust tip, rear park assist (because it’s a bit challenging to see out the back when the top is down), a power-retractable soft-top and more, the Lounge gets the standard leather upholstery already mentioned, plus a leather-wrapped multifunction steering wheel featuring cruise and audio controls, the latter connecting through to an upgraded Alpine audio system with satellite radio including a one-year subscription as well as Blue&Me hands-free phone communication, plus a seven-inch customizable in-cluster multi-information display ahead of the driver, automatic temperature control, an auto-dimming rearview mirror, heated front seats, a chrome shift knob, a bright chrome insert on the front fascia, chrome side mirror housings, body-side mouldings with the ‘500’ logo, fog lamps, standard 15-inch nine-split-spoke Tech Silver aluminum wheels, and more, all for a mere $20,495 plus freight.

My tester also featured the great sounding Beats premium audio upgrade for $495 and an additional $495 for a TomTom navigation system that’s about as aftermarket looking as anything I’ve ever seen from a manufacturer, appearing more like a smart phone in its handy dash-top mounting system. It’s placed perfectly for easy viewing while driving and is a highly functional navigation system, but the ability to integrate a person’s smartphone into the same holder might be a more appreciated option.

No matter the trim level the 500C’s interior is a breath of fresh air compared to most small cars that don’t go as far to make each stint behind the wheel feel like a special occasion. My tester included the usual 500’s body-colour instrument panel bezel ahead of the front passenger for a retro-inspired look, the metallic brown Espresso paint looking fabulous beside the various ivory-toned details. Ivory was a popular interior trim colour back in the original 500’s heyday, so this new model looks classically Euro-chic. Truly, Fiat should be selling purses, accessory bags, sunglasses, collars for similarly fashionable Chihuahuas and Pomeranians, and even nail polish to match the 500’s interior motif, what could be a smart moneymaking side business and endearing way to keep Fiat owners attached to the brand. Fiat doesn’t spend a lot softening up plastics on the dash or door uppers, but the door and centre armrests are suitably comfortable and the seats, the driver’s of which includes height adjustment and both front seat mechanisms allowing for memory return after someone climbs into the rear, are very comfortable.

Not so for the rear seats, however, where regular complaints about their overly upright backrests and poorly placed headrests, which push into the back of the head causing an unnatural and uncomfortable kink in the neck, left my kids with sour attitudes after initially being wowed by the cute little car (removing them solved the problem and put smiles back on their faces). There are two floor-mounted cupholders back there, useful enough for smallish bottles, while the two up front were ideal for the Rubbermaid water bottle that never leaves my side.

Those rear seats split and fold 50/50 for stowing longer items in the little trunk, but it’s not a completely flat loading floor so keeping larger items horizontal is a challenge if not impossible. Still, people don’t buy a Fiat 500C for hauling cargo, and I found its available luggage space suitable to everyday use and a lot more accommodating than some in its convertible class, the trunk measuring 153 litres (5.4 cubic feet) with the rear seats in use and 662 litres (23.4 cubic feet) when folded. And by the way, when you open the trunk lid while the roof is down, the rear portion automatically powers partway up and out of the way to allow access.

Under the stubby hood of either Pop or Lounge trims is a fun-loving little 16-valve, DOHC 1.4-litre MultiAir four-cylinder engine that makes 101 horsepower and 98 lb-ft of torque, ample for a car that weighs just 1,093 kilos (2,411 lbs), which is just 22 kilograms (48 lbs) more than the hatchback model. That my tester was fitted with the standard five-speed manual transmission didn’t hurt performance matters either, the easy to shift short-throw gearbox combined with equally effortless clutch take-up for a sporty feel that matches the free-revving engine. A Sport button on the dash, which is also standard, instantly modifies the throttle response (and the shift points of the optional six-speed automatic) for more engaging acceleration, while firming up steering feel for getting the most out of the already adept suspension, which includes a McPherson strut front setup, torsion beam rear axle, and front and rear sway bars.

Adding to performance are standard rear disc brakes, unusual for such a small car, the four rotors binding well during spirited driving for a level of control few in the 500’s class can match. The standard safety kit also includes four-wheel ABS with electronic brake-force distribution and emergency brake assist plus traction and stability control for even more control during slippery conditions, as well as hill start assist, tire pressure monitoring with displayed info, reactive front head restraints, a full assortment of airbags including front and rear side-curtain bags (unusual for a convertible) and even a driver’s knee-blocker airbag. Those in Canada’s colder climes will appreciate a standard engine block heater, while its standard Sentry Key antitheft engine immobilizer can be appreciated anywhere and tire service kit is a lot easier to deal with while stranded on the side of the highway or byway than changing a tire (although a $295 compact spare is available). All of these features add up to a Top Safety Pick by the Insurance Institute for Highway Safety (IIHS), which is pretty impressive stuff for such a small car.

By the way, the only options my tester didn’t include was that spare tire I just mentioned, a $200 windscreen and a $75 Smoker’s Group that replaces the 12-volt charge outlet with a “cigar” lighter and adds a removable ashtray to one of the front cupholder locations. A set of 15-inch Premium Satin Carbon aluminum wheels can be added too, but they’re no bigger than the stock Lounge rims, only different.

The spare tire, smoker’s package and windscreen can be added to the base Pop model too, as can a $175 security alarm, $235 Canadian Maple Leaf Stripe package (must be on a white car), plus satellite radio for $350, Blue&Me Handsfree Communication Package that comes with hands-free wireless phone connectivity, a leather-wrapped steering wheel and steering wheel-mounted phone, audio and cruise controls for $525 (the latter added automatically costing an additional $400 with this package or available on its own), 15-inch oval-five-spoke Tech Silver alloy wheels for $600 on the same 185/55R15 standard tires that come with the standard 15-inch steel wheels with wheel covers, Katzkin upholstery in Ash/Black, Black/Cardinal or Camel for $1,050, air conditioning with micron filtration for $1,200, and a six-speed Aisin automatic transmission with manual mode for $1,495.

After a week of daily errands, evening nights out and weekends trolling through the downtown core and travelling to our favourite parks (that last word reminding me just how easy the 500C is to park), the fun-to-drive yet ridiculously efficient Italian came out smelling like roses, rear seat foibles aside. My 6.9 L/100km average wasn’t quite as optimal as its claimed 6.7 city and 5.2 highway rating, although it was a lot more in-line with the 2015 model’s new five-cycle test results of 7.9 and 6.3. Either way, when it came time to fill up it made me smile even wider than the usual grin the car produced while driving.
©(Copyright Canadian Auto Press)
Car Shopping Tools