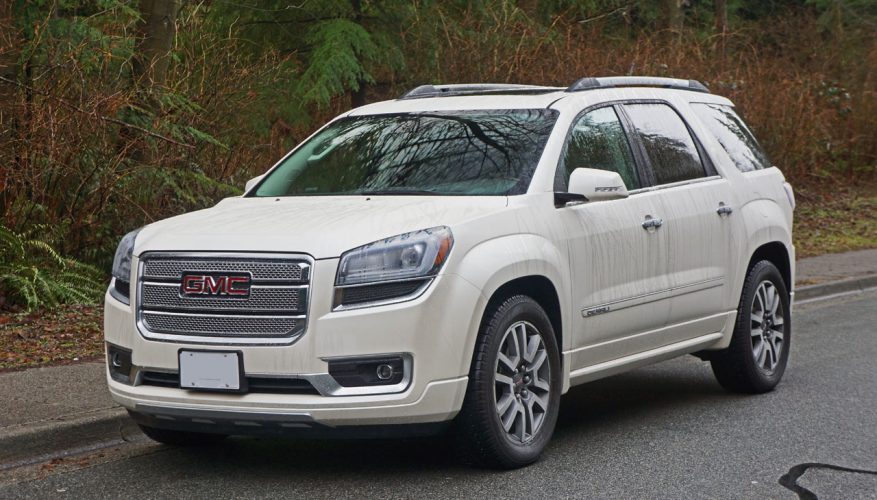 By: Trevor Hofmann
The GMC Acadia Denali is one hot looking family hauler. Proportionally it’s better looking than the comparatively portly Audi Q7 that it appears to be trying to emulate, with a brusquer more truck-like chromed grille, a more elegantly detailed lower valence, a more aggressive stance thanks to bulging fender flares, a longer, lower and leaner profile, and a cooler looking chrome-enhanced rear bumper with integrated rectangular tailpipes. By its styling alone it deserves the ardent following it garners, but let’s get something straight right off the bat: the Acadia Denali is no premium CUV.

General Motors would like us to mentally position all of its Denali models within the premium sector, and within the pickup truck sector at least I have no problem with this. After all, other than the now defunct Cadillac Escalade EXT (the crested wreath brand’s take on the also discontinued Chevy Avalanche) there isn’t much finer within the full-size pickup truck class. Amongst large crossovers and SUVs, however, premium pickings are riper than they’ve ever been, with top-tier brands like Bentley and Lamborghini about to mix it up with stalwarts like BMW, Land Rover, Mercedes-Benz and Porsche, not to mention the aforementioned four-ringed brand from Ingolstadt and GM’s own Cadillac division. The list is long and goes on and on, while simultaneously brands like Ford, Toyota and Hyundai are producing near full-size seven-passenger CUVs with levels of performance, materials quality and finishing, plus features that cross over the mainstream volume sector’s invisible line into premium territory, rubbing shoulders with Acura, Infiniti and Lexus crossovers as well as wannabes from Buick and yes, GMC.

Truly, all we’re left to do is pick apart entries for what they are, dissect them feature for feature and compare perceived and real quality levels, because the lines between mainstream and luxury are forever blurred and therefore a company’s claim to premium status simply isn’t good enough anymore. If they don’t deliver the goods, it’s simply a bright and shiny mainstream volume model that’s priced higher than it should be. Is this how the new Acadia Denali measures up?

GMC has done a lot to improve the Acadia in recent years, and I’m not just talking about its styling. It’s always been a good looking SUV, but previously its interior refinement and feature set wasn’t competitive with others in the mainstream crossover class, let alone anything from a premium brand. GM suffered the same problem with its last Buick Enclave, and like the Acadia it was also improved significantly for its 2013 refresh with new soft-touch leather-like interior surfaces on the dash and door uppers, accent stitching in key areas, and ambient lighting throughout, but both SUVs are nevertheless missing a lot of the types of features expected of vehicles that reach up into the price range GM is asking for these utes.

When fully equipped like the Acadia Denali loaned to me for a weeklong test, it’s priced higher than similarly sized crossovers from Acura and Infiniti yet doesn’t deliver the same level of refinement or features. Heck, its starting price of $55,995 isn’t much lower than the aforementioned Audi Q7, priced at $58,200, while a fully loaded Acadia Denali passes the $60k threshold on to a grand total of $61,310, plus $1,600 for freight and pre-delivery prep. Of course, the Audi’s price will escalate into the outer stratosphere if options are added on, but it’s not like the Acadia Denali is particularly rife with premium gear.

A similar list could be found on a high-end Honda Pilot, Hyundai Santa Fe XL or Toyota Highlander, all of which remain below the $50k threshold and two that only reach up into the mid-$40k range, but these would also include proximity-sensing access with pushbutton ignition systems and their key fobs are all much nicer (my notes stated: “Cheesy five and dime key fob still looks like it comes out of an entry-level car, although oddly GM does a better job with key fobs in its small cars.”), the power windows would include auto up/down for all positions instead of just the driver with one of these competitors (and include the front passenger with the others), the infotainment systems would feature significantly larger touchscreens (my notes said: “Small infotainment display with rudimentary nav graphics.”), SMS-to-speech and email-to-speech would be included, the powered driver’s seat of two of these rivals would have between 10 and 12 adjustments, the audio systems would include up to 12 speakers and/or 650 watts of power depending on the manufacturer, two of the competitors mentioned would provide more soft-touch surfaces (although one has less) (my notes stated: “Additional door panel and lower dash and lower console plastic is cheap.”), the imitation woodgrain would feel more natural (my notes said: “The woodgrain looks real, and is real on the steering wheel. For the price, however, it should be real throughout, or at least real enough feeling imitation.”), the A-pillars would be wrapped in cloth in one, the second-row seats would be more comfortable, the second-row window seats of all would be heated, rear window sunshades would be included, an overhead sunglass holder would be fitted, one would boast a right-side lane change camera, two would get an airbag for the driver’s knees, and critically Transport Canada fuel economy ratings would be much better.

One of the reasons for its poorer fuel economy is its larger overall size, the Acadia, like the other Lambda SUVs within GM’s “midsize” crossover fleet (including the aforementioned Buick Enclave and Chevrolet Traverse) the largest in its class. This results in the roomiest interior, capable of seating real adults in the third row, accessible via very nifty forward sliding second-row seats, plus a sizable cargo hold when all seats are in use. The numbers speak for themselves, the Acadia capable of hauling 682 litres of luggage behind its third row compared to 589 litres for the Pilot, 383 litres for the Santa Fe XL, and 390 litres for the Highlander. Likewise, there’s a total of 1,985 litres available when the GMC’s third row is folded flat, while the Honda only offers 1,351 litres, the Hyundai 1,159 litres and the Toyota just 1,198 litres. Fold all rows flat and the Acadia is the only one in the pack that can almost pass off for a minivan, with 3,286 litres of maximum stowage created compared to 2,464 for the Pilot, 2,265 for the Santa Fe and 2,370 for the Highlander. Incidentally, all but the Pilot have the same tow rating of 2,359 kilos (5,200 lbs), the Honda rated at just 2,045 kg (4,508 lbs). Therefore, if you need passenger and cargo space above all, including the ability to carry up to eight of the former, the Acadia or any one of its platform-mates is the way to go.

The heavier Acadia is also endowed with the highest overall engine output, its 24-valve, DOHC, direct-injected 3.6-litre V6 with variable valve timing good for 288 horsepower and 270 lb-ft of torque, tromping the imports with torque although the Hyundai makes a hair more horsepower at 290. All of these CUVs except the Honda utilize six-speed automatic transmissions with manual mode, while ride and handling is also similar all-round, in that they corner better than traditional SUVs but don’t perform as sportily as their manufacturers want you to believe; they all feature fully independent suspension set-ups with comfort being top priority. My notes stated: “Handling is surprisingly good for such a large SUV,” and, “Rides and drives beautifully, with plenty of power and smooth easy shifts.”

Another nod in the Acadia Denali’s favour is its list of active safety features, particularly its standard forward collision alert, lane departure warning, side blind zone alert, and rear cross traffic alert, features that are normally allocated to premium brands. Only one of these competitors offers anything remotely as comprehensive. Now before you start telling me that these few differences (and its inclusion of heads-up display, which is pretty cool) qualify the Acadia Denali for premium status and thus relegates these others to the volume brand sector, keep in mind that arguably more acceptably premium branded models like the Infiniti QX60 offer these items and much more for less money when both are fully loaded. Yes, a top-line QX60 with the Premium, Theatre, Deluxe Touring & Technology packages can be had for only $59,500, which is $1,810 less than the Acadia Denali. Is it possible that GMC has too high an opinion of itself?

By this point you might think that I don’t like GMC and am especially not fond of the Acadia Denali, but both assumptions are far from the truth. I actually like this SUV a lot. I love its styling, am fairly impressed with its interior, while I’m a bit put off by its lack of certain features and quite elated by the unexpected inclusion of others. It’s reasonably powerful off the line and on the highway and its ride and handling compromise surprised me in all the right ways. I can live with its so-so fuel economy too, because its passenger and cargo capability is class leading. If you haven’t guessed already, it’s the Acadia Denali’s price that has me dumbfounded, hovering at $10-$15k above its real competitors. If you can talk your local dealer down by at least the former sum then by all means take this lovely ute home and enjoy every minute behind the wheel, but if you pay full pop be prepared for a bigger hit than most rivals when it comes time to resell, as pre-owned buyers are even stingier about value.

A little research on Canadian auto classified sites shows that the Acadia Denali will lose about 45 to 50 percent of its value in three years, with 2011 models asking around $30,000 to $33,000, whereas the top-line Honda Pilot Touring, which starts about $10,000 less than the Denali boasts higher asking prices of between $33,000 and 38,000. The Toyota Highlander Limited is an even better deal, fully loaded when new for about $15,000 less than the Acadia Denali yet 2011 models are priced between $33,000 and $36,000 now, while the Santa Fe XL hasn’t been on the market long enough to rate.

In summary, the 2014 GMC Acadia Denali is a very good SUV in need of much more refinement, luxuries and features to belong to the premium sector or a much lower price to compete with seven-passenger CUVs from mainstream volume brands. It sits in a void that GM has created, along with its dizygotic twin, the Buick Enclave. The reality shows up in the sales charts, where even Honda’s rather outdated Pilot sells in bigger numbers than the Acadia, and Toyota’s new Highlander is on track to double the Acadia’s sales tally by the end of this year.

At the end of the day you won’t go wrong if you purchase a new Acadia Denali, just make sure you work out the best price possible.
©(Copyright Canadian Auto Press)
Car Shopping Tools