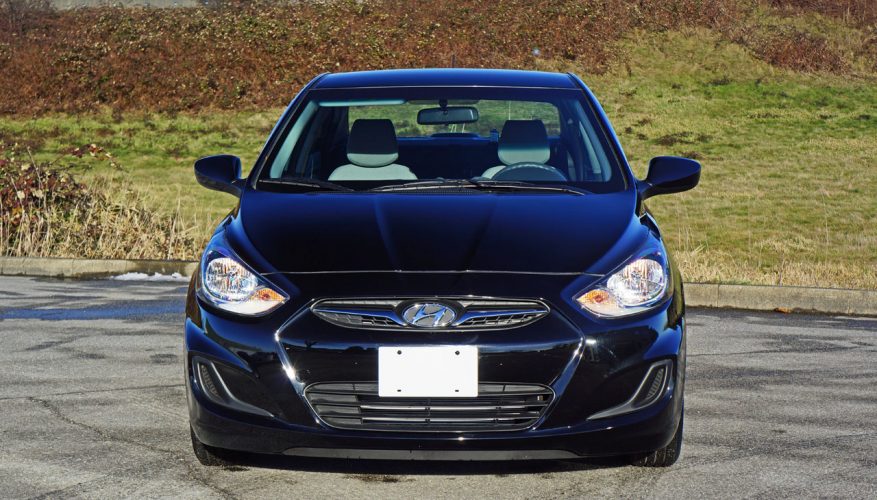 By: Trevor Hofmann
I recently drove a fully loaded Accent Sedan GLS and must say I was extremely impressed, so when opportunity knocked and a mid-grade Accent Sedan GL asked me if I could come out to play I happily agreed.

Yes, while classy looking for a subcompact four-door, there’s a playful attitude residing inside. It comes from one of the most powerful standard engines in the compact class, not to mention an advanced set of standard six-speed transmissions. That direct-injected, 16-valve, DOHC 1.6-litre four-cylinder engine puts 138 horsepower and 123 lb-ft of torque down to the front wheels via a six-speed manual gearbox or an optional six-speed automatic, the latter being le mode de faire in my GL tester.

In a car that weighs a mere 1,124 kilos (2,400 lbs) I’m sure you can imagine how these components combine together for quick takeoff and great highway passing power, while the autobox’s shift lever-mounted manual mode gives even greater control through the corners, but probably more important in this class is fuel economy, something else the Accent exceeds at.

Transport Canada rates the 2014 Accent Sedan at just 7.6 L/100km in the city, 5.2 on the highway and 6.5 combined with the manual, or 7.5 city, 5.3 highway and 6.5 combined with the automatic. I don’t know about you, but I could certainly live with these numbers. Then again we should remind ourselves these figures will change when the near identical 2015 Accent arrives, likely crossing the Pacific in a gigantic Hyundai PCC (Pure Car Carrier) as I scribble out one of the last 2014 model year reviews ever – Hyundai Heavy Industries is the world’s largest shipbuilder if you weren’t already aware. That car will feature the exact same drivetrain within a carbon copy of the body and completely carryover interior, but a more stringent Canadian fuel economy testing method involving five process cycles instead of just two lifts our country into the modern era and will simultaneously give the 2015 Accent a new less efficient-looking rating when that car is available. When this happens, ignore the negative optics and appreciate that this outgoing 2014 model gets identical real-world mileage. It’s all in the name of good, honest, transparency.

Such a move must sit well with the folks that run Hyundai Canada, because the brand has always been about delivering good value to Canadian consumers. If you didn’t already know, Hyundai was in our land of black ice and frost heaves many years before it showed up in the mostly balmy U.S. (northern states aside). Maybe they can relate to our cold winters (it hit –8 Celsius in Seoul last week when I was passing through), but either way we sidled up to the Korean automaker and bought tens of thousands of little Ponys and then after that many more Excels, and while the automaker might want us to forget these comparative dark years (especially with respect to reliability and rust), it was a fruitful beginning that, after 30 years has resulted in one of the more respected mainstream motoring nameplates available in our country and around the world. These days more and more people are putting Hyundai on their automotive shopping lists next to Toyota, Nissan and Honda, while the domestics seem to be playing catch-up.

And Hyundai should be on that list. Consider the Accent Sedan: for only $13,549 plus $1,595 for freight and pre-delivery prep you can own a very nice little subcompact sedan, replete with stylish sheet metal including standard body-colour door handles and side mirror caps, the powerful engine and sophisticated transmission I already mentioned, good road manners, a quality interior, and more features than you might expect. The base car comes equipped with standard powered door locks, a tilt steering column, driver’s seat height adjustment along with front seatbelt height adjustment (important so the seatbelt doesn’t cut into your neck), four-speaker AM/FM/CD/MP3 audio with aux and USB connectivity plus iPod/iPhone integration, active front headrests, three rear headrests, six airbags, four-wheel discs with ABS (in a subcompact segment that normally makes rear drums standard), electronic brake force distribution and brake assist, stability and traction control joined up with Vehicle Stability Management (VSM), and more.

The base model uses the same 14-inch steel wheels on 175/70R14 Hankook Optimo tires as my GL, with twinned four-spoke wheel covers that look like alloys from a distance, but this mid-rung model gets a long list of standard features that makes it a favourite amongst Accent Sedan buyers. These include keyless entry with an alarm, Bluetooth hands-free phone connectivity, telescopic steering, air conditioning, heated front seats, heated exterior mirrors, powered windows with driver’s side auto-up/down, an upgraded six-speaker stereo with steering wheel-mounted audio, cruise and phone controls, satellite radio, a deluxe centre console with an armrest, and 60/40 split-folding rear seatbacks.

These expand the use of a large trunk that already measures 388 litres (13.7 cubic feet), keeping as much gear hidden away in the boot as possible so as not to mar the upscale ambiance within the Accent Sedan GL’s cabin. OK, I admit that I probably use the word “upscale” too much, because this is a pretty basic economy car we’re talking about, not a Genesis Sedan or Equus, both premium-level Hyundai-badged performance-luxury cars capable of duking it out head-to-head with the top volume luxury models. Just the same, for a subcompact sedan the Accent Sedan GL delivers a high level of respectability.

First off it feels more like a larger compact model than most the subcompact four-doors it competes against and is certainly a great deal larger than the current crop of sub-subcompact city cars hitting our streets, while the two-tone grey interior motif of my tester was really attractive with lots of satin silver metallic trim for a cool, sophisticated look. These metal accents highlight the multi-function steering wheel, infotainment interface and centre stack, shifter surround, door handles and door panel trim, that latter which is especially attractively designed. The car’s switchgear looks great too, and is very well made with solid-feeling plastics, nicely damped actuation and almost zero wiggle, just another example of the high level of quality I’m learning to expect from this Korean brand. My tester’s seats were covered in attractive fabrics, with woven light grey bolsters and sides plus inserts in a grey and white dotted pattern that looked great. They’re extremely comfortable, and while not powered should be adjustable enough for most peoples’ needs. As mentioned the detailing on the doors was especially nice, with the same seat insert material padding the door panel inserts, plus the aforementioned silver trim that flows underneath the armrest, and really nicely designed and finished power window and power mirror switchgear. Even including the armrests, soft-touch plastics are pretty well non-existent, but the quality and texturing of the hard surfaces is excellent.

The multi-function steering wheel features full controls for the audio system cruise, phone and voice command, while the entertainment system includes a simple, straightforward display and good sound for an entry-level car, with bright highs and surprisingly resonant bass tones. Likewise the HVAC system is made up of three large dials in this segment’s usual function-first fashion, and they’re large enough to use with gloves, as are the large two-way front seat heater buttons.

As mentioned the Accent Sedan is a good looking four-door even without the fog lights and aluminum wheels of the GLS, and together with its impressively designed and constructed cabin, smartly packaged feature-set, strong performance and good fuel economy is a car that will continue to reward its owner many years after its purchase. Its good initial value will be part of that feel-good factor, the well-equipped car I tested priced at only $17,200 plus $1,595 for freight and pre-delivery prep.

If a high-quality yet inexpensive subcompact is your target car, don’t hesitate to check out the Accent Sedan. I’m quite certain you won’t be disappointed.
©(Copyright Canadian Auto Press)
Car Shopping Tools