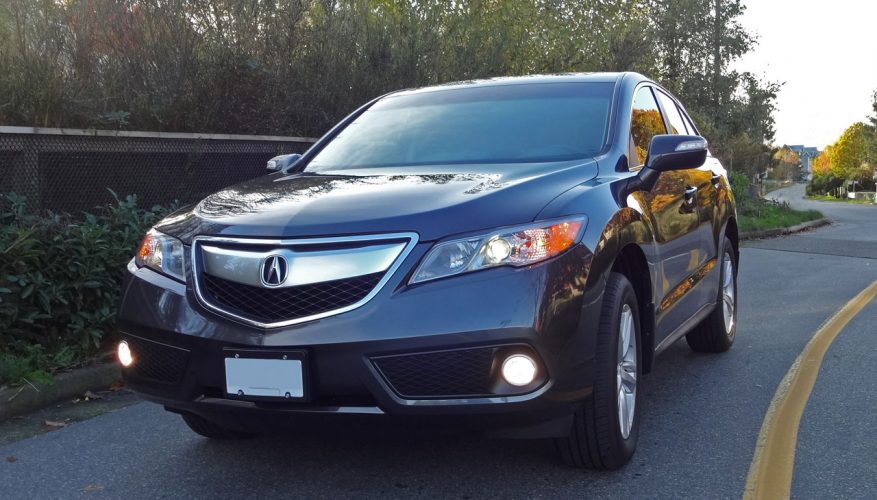 By: Simon Hill
Introduced for the 2013 model year, the current second-generation Acura RDX quickly established itself as a top seller in the small luxury SUV segment, with only the Audi Q5 outselling it during 2014. Not wanting to mess with success, Acura has mostly avoided tinkering with the formula, with updates to the RDX restricted to a new Kona Coffee colour for 2014 and no further changes for 2015.

From the moment you climb aboard the RDX, it’s easy to see the appeal: The doors close with a muted thud, and the interior is a hushed, cocooning space. The standard-equipment AWD system and extra ground clearance compared to a sedan make tackling winter roads easy and relaxed. The decent-sized luggage area and split-folding rear seats make carrying cargo a snap, aided by an intelligently-designed power tailgate that lets you easily override it for quick manual operation, and convenient seatback release levers in the cargo area.

On the road, the RDX delivers positive driving impressions thanks to a willing and capable engine, responsive suspension, and awesome-sounding 10-speaker audio system included with my test vehicle’s Tech package. The RDX isn’t as plugged-in feeling through the curves as a good sedan, nor even as some of the more performance-oriented crossovers out there for that matter, but it’s still rather good in a nice middle-of-the-road kind of way, and it’s just the right size to be genuinely functional yet not unwieldy around town.

Under the 2015 RDX’s hood, Acura eschews direct injection, turbochargers and even dual overhead cams, instead sticking to a simple, tried-and-true one-engine formula, fitting all RDXs with a 3.5-litre 24-valve SOHC V6 that cranks out an ample 273-horsepower and 251 lb-ft of torque. The engine is hooked up to a six-speed automatic transmission driving all four wheels, with power distribution monitored and adjusted by Acura’s AWD with Intelligent Control system. This normally runs things in front-wheel drive mode for efficiency, and shifts up to 50 percent of the power to the rear wheels as needed if the front wheels begin slipping (it’s essentially the same system as in the Honda CR-V).

From behind the wheel the V6 has a deep, mellifluous exhaust note and a pleasantly willing nature, and it’ll haul the 1,749-kilo (3,855-lb) RDX from 0 to 100 km/h in just under seven seconds. The six-speed automatic transmission shifts crisply and smoothly, with Drive mode favouring higher gears for better economy and Sport mode offering more aggressive shift timing. There are also paddle shifters for when you want to take more active control. The transmission is sporty enough during manually-initiated downshifts (it makes nice rev-matched gear changes), but it auto upshifts from first to second whether you want to or not, and there’s a bit of lag between when you click the shift paddle and when the shift executes (maybe a half-second, so not bad, but definitely noticeable).

Thanks to the Intelligent AWD system and Acura’s Variable Cylinder Management (which can shut down three of the engine’s cylinders during low load operation to conserve fuel), fuel economy is reasonably good, with the 2015 RDX rated at 12.1 / 8.7 L/100km in city/highway driving using the new five-cycle test process. I averaged somewhat worse than the rated city number, using 13.5 L/100km in purely city driving, but I should point out that this was mostly in the cold and rain while often stuck in stop-and-go traffic. Colleagues of mine have reported getting much better mixed fuel economy averages of around 9 or 10 L/100km under more reasonable circumstances. I should also mention that you really don’t notice the Variable Cylinder Management doing its thing as it operates seamlessly in the background.

The suspension (MacPherson strut up front and multilink in the rear) provides a ride that’s taut but not harsh, with decent handling for this segment. Helping in this regard is the RDX’s low centre of gravity compared to most crossovers, and its Amplitude Reactive Dampers. These feature two piston valves per shock absorber rather than just one, with the primary piston absorbing minor road irregularities and the stiffer secondary piston reigning in larger suspension motion. So you get a soft response if the wheel encounters a small, sharp bump, and a firmer, more controlled response if the wheel is moving through a larger range of motion such as when negotiating an undulating corner.

Inside, there’s soft touch materials on every surface you might expect, including the front and rear door uppers, armrests and dash top, with rigid plastics making up the lower dash and door lowers as expected. One thing that could use an upgrade would be the A-pillars that would create a more premium feel if the hard plastic were replaced with a cloth wrapping.

Trim choices are limited to the base RDX (starting at $43,385 including the $1,995 destination fee) or the RDX Tech (starting at $45,385 destination in), which is a good few thousand dollars below the Mercedes-Benz GLK (which starts at $50,675 delivered with the diesel engine) and a little less than the Audi Q5 (which starts at $43,895 with destination, provided you’re okay with black or white paint, and $890 more if you want a metallic colour).

Missing from the features and options lists are things like blind spot detection and lane departure warning (which is a bit ironic considering you can get them on a Honda CR-V), or active cruise control with collision mitigation. Frankly that’s just fine with me as I prefer the less costly and less complicated approach, but if these types of driver assist technologies are important to you then you might want to consider competitors such as the Volvo XC60 or Audi Q5.

I appreciated the RDX’s comfortable seating and abundance of onboard features, although I did find that operating some of said features took a little getting used to (possibly because I was trying to learn while driving in the dark during a monsoon-like rainstorm). The centre stack controls are reasonably well laid out, but there’s a lot of information to take in and the controls and display are mounted fairly low, with the result being that I initially struggled to find the heater mode switch, for example.

I also found the infotainment interface to be a little confusing. It has several layers of menus and different main selections depending on whether you push up or down on the main controller knob, and on several occasions I found myself scrolling hopelessly through the wrong menus while trying to locate a function. It’s true that I tend to take a "press-lots-of-buttons-and-hope-for-the-best" approach to learning new system interfaces, but I’m usually pretty good at sussing them out, and this one baffled me more than most.

Other nitpicks include the somewhat restricted rearward visibility (no surprise there as the RDX is hardly unique among crossovers in this regard), the lack of retained accessory power when you shut off the engine (unless you remember to shift into neutral before shutting down), the lack of a cargo cover, and the pedal-actuated park brake (in this segment it really ought to be either a leather-wrapped handbrake or an electronically actuated setup). Last but not least, I was unable to get Acura’s Bluetooth system to work properly with my phone (not the first time I’ve had this trouble with an Acura). I’ll admit my three-year-old phone is a less-than-popular model, but still, most other systems have no problem with it. At any rate it’s worth checking that your own phone is compatible, just in case.

In most other regards the RDX really serves up exactly what most small luxury crossover shoppers are looking for, with a good balance of features and value. It’s a straightforward and solidly built design that’s undemanding yet reasonably responsive to drive, and it has all the features and comfort most really need without unnecessary complexity and resultant added cost. For those seeking practical yet luxurious daily transportation, the RDX delivers with its comfortably serene cabin and a versatile 739-litre cargo-carrying capacity (2,178 with the seats folded), all for an attractively competitive price. And that makes it well worth a look.