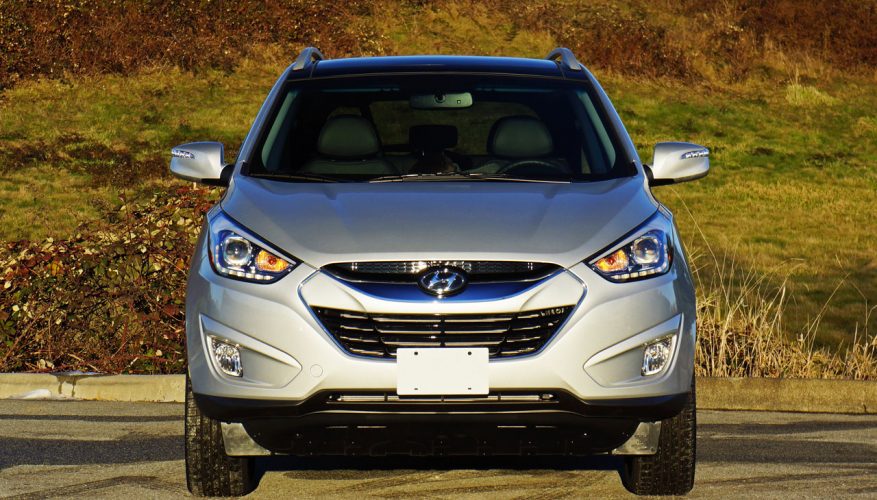 By: Trevor Hofmann
Earlier this year I had opportunity to test Hyundai’s refreshed 2014 Tucson, but in mid-grade GLS AWD trim. This time around a top-line Limited model made itself available, and this model truly hits the high life.

It wears most of the same exterior upgrades as the lower priced GLS, such as the better looking hexagonal grille with upscale chrome trim, beautifully detailed headlight clusters with their strips of premium-like LED DRLs, updated front and rear fascias, and newly shaped tail lamps, although over and above these shared changes the Limited infuses those rear lights with prettier LED-enhanced lenses, as well as a set of turn signals integrated into the side mirror housings, both giving the SUV a more premium look, while larger 18-inch alloy wheels wrapped in 225/55R18 Kumho Solus KL21 tires combine for a more capable looking stance with better road holding.

Inside, the same dual-pane panoramic sunroof featured in my last Tucson GLS once again sheds winter’s precious light on the new Tucson’s very attractive interior, albeit the Limited model boasts a higher level of luxury than the lower grade CUV. After stepping over this model’s deluxe door scuff guards, eyes immediately gravitate to Hyundai’s sporty yet classy twin-circular gauge package rimmed in chrome and stuffed full of bright, colourful Supervision primary dials, which are easier to read in all lighting situations. At centre is a 4.2-inch LCD multi-information display highlighting vital info directly ahead of the driver. Additional details can be viewed in a large seven-inch high-resolution colour touchscreen infotainment system featuring navigation and an integrated rearview monitor, whereas music lovers will truly appreciate the Limited model’s upgraded stereo that boasts 360 watts of power and resultantly rich bass tones (Lauryn Hill’s now classic Doo-Wop -That Thing was playing on the radio and it sounded especially sweet). Below that is a two-dial, five-button display-enhanced dual-zone automatic climate control system, ideal for just setting and leaving at your (and your partner’s) favourite temperature.

I was equally taken aback by the Limited model’s extremely supple leather upholstery, much richer feeling than most optional hides in this class, while the seat inserts were perforated for better breathability in summer. The seats were complemented by a stitched leather-like armrest overtop the central storage bin, along with matching armrests on the doors. These were joined by soft padded surfaces ahead of the front passenger and on the door uppers, front and rear, the pliable treatment extending halfway down the door panels as well, although I should mention that the GLS included this high-quality soft surfacing too. All other surfaces not already mentioned are harder, but they’re very nicely textured with a matte finish and therefore look great. Titanium coloured metallic trim accents the steering wheel, the infotainment interface, each dash vent, surfaces around the shifter, and the door handles.

Getting comfortable in a Limited is easy thanks to an eight-way power adjustable driver’s seat with lumbar, whereas moving down the road was made more enjoyable due to Driver Selectable Steering, which lets you customize your driving experience between Sport, Normal, and Comfort steering settings. I left it in Sport mode other than for testing, where it suits my taste for more reactive response to input.

Of course, both Limited and GLS models include many of the standard features offered in the base GL, such as that model’s power windows and door locks with remote access, two-way heated front seats, steering wheel-mounted audio, cruise and Bluetooth phone controls, iPod, USB and auxiliary plugs for the audio system, variable intermittent wipers, an intermittent rear wiper, body-colour door handles, downhill brake control, hill start assist, active front head restraints, Vehicle Stability Management (VSM) with stability and traction control, six airbags including one for the driver’s knees, and much more.

That base model goes for a very accessible $21,499 plus $1,760 for freight and pre-delivery preparation, whereas the GLS ups the price point to $26,899, plus $2,000 more if you want yours with all-wheel drive, while my top-tier Limited AWD tester starts and ends at $33,599, plus destination charges. Keep in mind that many in this class reach up nearer to the $40k threshold when all features are added on, and some even surpass it.

As far as powertrains go, there’s a difference between base and higher end models too. That GL trim level I just itemized includes a smaller 16-valve, DOHC, direct injection 2.0-litre four-cylinder engine with dual continuously variable valve timing (CVVT) that produces 164 horsepower and 151 pound-feet of torque. In the Tucson’s most basic form it comes mated up to a six-speed manual gearbox driving only the front wheels, the combination resulting in a claimed fuel economy rating of 10.0 L/100km in the city, 7.2 on the highway and 8.7 combined. Add the six-speed automatic with Shiftronic manual-mode to this engine and efficiency numbers get a bit better at 8.9 city, 6.9 highway and 8.0 combined, while stepping up to all-wheel drive will cost you a tad more at the pump with a rating of 10.0, 7.8 and 9.0. No matter the transmission choice the 2.0-litre is the way to go if you want to save on fuel, and of course save at the time of purchase.

The 16-valve, DOHC, direct injection 2.4-litre four comes standard with the GLS FWD, GLS AWD and my Limited AWD tester, and at least when it comes to performance is the engine of choice. It puts out 182 horsepower and 177 lb-ft of torque for much more spirited performance off the line and on the open road where it really moves along nicely, while its fuel economy rating is 9.9 L/100km in the city, 7.0 on the highway and 8.6 combined with FWD trim level or 10.2 city, 7.8 highway and 9.1 combined with AWD. While the previous numbers are useful for comparing the Tucson’s efficiency to other compact 2014 model year CUVs in the industry, a better example of real-world fuel economy can be found south of the 49th where the U.S. EPA rates the 2.4 with AWD at a metric-converted 11.7 L/100km city, 9.4 highway and 10.7 combined.

The 2.4 moves the Tucson away from stoplights briskly and gets quite fun on the open road, the six-speed automatic shifting through its gears with a more positive feel than rivals with CVTs, while the chassis feels lithe and confidence inspiring in the corners, the 18s on my tester aiding the process. The Tucson Limited feels as at home on the highway as it does trolling around town, a terrific little CUV for zipping in and out of inner city traffic. Braking is strong as long as you don’t overcook the four discs on a curving mountain road, which more often than not causes noticeable fade, but during regular use they bind well and amid panic situations are more than adequately supported with ABS, electronic brake force distribution and emergency brake assist.

As capable as the Tucson Limited is through corners I found it even more agreeable as a comfortable day-to-day family hauler. The front seats are roomy and quite supportive, aided by the adjustable lumbar controller I mentioned earlier, and kept me toasty warm during a particular cold spell via two-way seat heaters up front and ditto for the rear window seats, while those rear perches were amply accommodating for a couple of large adults or three smaller ones abreast.

The only items blatantly missing from top-line trim were first, proximity sensing access with pushbutton ignition, a feature offered on many models across the Hyundai lineup and on rival compact crossovers, so I expect it will show up in the upcoming next generation Tucson, and lastly a powered liftgate, available with some segment competitors.

After manually lifting that tailgate, which granted is a very easy process, you’ll find a sizable 727 litres (25.7 cubic feet) of cargo space, which can be made even larger by dropping the standard 60/40-split rear seatbacks flat for a total of 1,580 litres (55.8 cubic feet). If that’s not enough Hyundai sells crossbars for the roof rack, or you can tow up to 907 kilos (2,000 lbs) behind.

A practical runabout for sure, although in Limited AWD trim the Tucson becomes a little luxury CUV of the first order. Never once uncomfortable and, proximity sensing access aside never feeling like I was missing out on any requisite feature (and I must admit to being a bit of a hedonist), the Tucson Limited is an impressive compact crossover that should be positioned high on your must-drive list.