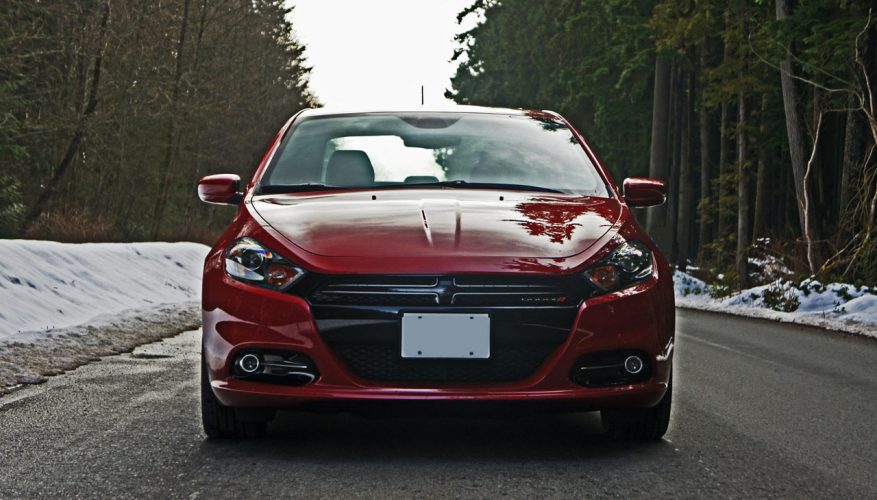 By: Trevor Hofmann
Remember when Chrysler was attempting to be a premium brand and Dodge was targeting a more mainstream market? The company’s Auburn Hills team, then under the DaimlerChrysler umbrella, came out with some very nice models including the 300C full-size sedan, which was based on the mid-2000s Mercedes-Benz E-Class, plus the pricey albeit impressive Pacifica crossover-like tall wagon that used a combination of Mercedes and Chrysler minivan underpinnings, and the Crossfire coupe and convertible, a concept turned reality thanks to the Merc SLK it rode upon. Fortunately the 300 sold very well, but unfortunately the others didn’t and DC abandoned Chrysler’s premium aspirations along with all of its American brands in 2007, leaving the domestic automaker to fight it out on its own with much depleted cash reserves. To make a long story short Chrysler is now under Fiat’s umbrella and that Mercedes’ based 300 now underpins the Lancia Thema in Europe, a model that previously shared its unibody with an Alfa Romeo, while the latter Italian brand’s Giulietta is the basis for our new Dodge Dart.

Recent automotive history aside, the Dart is a very good car that deserves a great deal more attention than it gets. Part of the current problem are the cars that preceded: the Neon which was pretty good when it hit the market was somewhat outclassed when it finally left, and the crossover SUV-styled Caliber that was never a serious contender against the imports and, most critically, was never offered as a four-door sedan.

At first glance the Dart reminds me of the Neon, but more the second-generation car that was rebadged SX 2.0 here in Canada. But let’s leave that at first glance, because the car itself is so much better than its compact predecessor that it might as well be from a different company. Jabs to Auburn Hills aside, the Alfa-based Dart is good looking, impressively finished inside with loads of available features, plenty powerful no matter the engine chosen, and brilliant fun through the corners. Truly, if more people parked their Civics, Corollas and Cruzes and took a spin in a Dart, they’d soon forget their allegiances and embrace the little Italoamericani.

Before you head down to your local Chrysler, Dodge, Jeep dealer, a brief overview of the Dart’s available trim levels is in order. Unlike most compacts that only offer a few trims and one or two powertrain choices, the Dart can be had in five trim levels and no less than three engine choices plus three transmissions. Talk about variety! Base SE models come fitted with the 2.0-litre Tigershark four-cylinder mated to either a six-speed manual or optional six-speed automatic, while the model’s fuel miserly Aero trim gets a tiny 1.4-litre turbocharged four conjoined to the same six-speed manual albeit a different six-speed automatic dual dry-clutch transmission (DDCT). Mid-grade SXT trim uses a larger 2.4-litre Tigershark MultiAir four hooked up to the six-speed manual or conventional six-speed auto, which is the same set of powertrain combinations incorporated into my Dart GT tester featured here in this review. Lastly, the more luxury oriented Dart Limited gets the same engine with a standard six-speed automatic.

To put things into perspective, even the base 2.0-litre engine makes a heady 160 horsepower and 148 lb-ft of torque right out of the box, whereas my 2.4-litre powered GT put out an even more generous 184 horsepower and 171 lb-ft. I suppose I should also mention that the most fuel-efficient Dart Aero also makes the most twist with 184 lb-ft of torque available, while it produces the same 160 horsepower as the base model, but that’s another review for another time, my Dart GT tester deserving of all the attention from hereon in.

The 2.4-litre MultiAir engine loves to rev all the way up to 6,500 rpm, pulling strongly throughout, and as expected of its European parentage the six-speed manual fitted to my tester boasted a nice notchy short-throw shift quality and progressive, ideally weighted clutch take-up for good straight-line performance and a fun-loving attitude through the corners, the latter helped out by good steering feel with direct turn-in, although not too much to be twitchy. There’s so much power at the front wheels it chirped as I let out the clutch in second. In the wet the chirp was instead a momentary loss of traction, but the car’s standard traction and stability control grabbed hold and forward momentum continued.

In a word, the Dart GT is sporty. I won’t go so far to say it can do battle in the sport compact segment like its predecessors’ SRT-badged variants, but all-round this is a much more stable car through the corners and possesses a drivetrain that’s infinitely more refined, so a side-by-side fight on a twisting track might give the nod to the new Dart despite its engine output disadvantage. While the engine looks much the same as other 2.4-litre powered Dart models on paper, the automaker has given it a unique calibration in GT guise, while its pedal mapping is also set up exclusively. Likewise the six-speed gearbox incorporates performance-oriented ratios, while a sport version of the car’s fully independent suspension, complete with a rear stabilizer bar, hides below.

Ahead of a Dart SRT, which according to the Dodge Brand Product Plan released last May is set to arrive in late 2016 as a 2017 model, this Dart GT is the model’s performance leader. Therefore, along with the most powerful engine currently available it gets a gorgeous set of flared five-spoke alloys on 225/40R18 Yokohama Avid all-seasons, a good all-round tire with decent performance and most importantly, inexpensive replacement.

Visually the GT coats the Dart’s crosshair grille in gloss black, while giving the same shiny treatment to the grille surround, bumper section and fog lamp bezels, while LEDs set into the painted side mirror housings are mere precursors for the stunning LED-infused “racetrack” taillights that reside above a sporty set of dual chrome-tipped exhaust pipes poking out from behind a matte black diffuser-style lower valance, the final component to the GT’s underbody aerodynamic treatment. From nose to tail the Dart GT looks the part of a sport compact, a theme that continues inside.

Perforated Nappa leather upholstery is unexpected in the Dart’s compact class, but it’s standard equipment with the GT. A cool (literally) satin silver shift knob announces this car’s performance aspirations while a leather-wrapped steering wheel enhances the sporting ambiance, although it isn’t stitched in red thread like the sport bucket seats, the driver’s which is ten-way powered for superb comfort and support. Bright red accents abound, mind you, surrounding the one-piece instrument panel and door pulls; great matchups to the usual red details also found in most other cars, such as the gauge needles, heating controls and seatbelt unlatch buttons. Red seatbelts would look just about perfect in this car, but possibly we’ll have to wait until the SRT for such over-the-top raciness.

Until then, the GT’s seven-inch customizable multi-information display is unheard of large for the compact class. It’s a bright, highly legible design that sits square in the middle of the “gauge” cluster. Maybe we should rethink that term, as the half-tach is the only real gauge included, the speedometer a Formula 1 style digital readout with massive numerals.

Speaking of massive, the centre stack is topped off with a Uconnect infotainment system measuring 8.4 inches in diameter, easily the largest in the segment and fully featured with everything you will likely want to do with one of these. The obvious audio and phone controls are included, but the integrated climate controls allow you to adjust the seat heaters via the touchscreen, while an easy-to-use Garmin navigation system was also part of the upscale package. Bluetooth phone connectivity was easy to set up and worked flawlessly throughout my test week, even incorporating wireless audio streaming from my smartphone, while an integrated reverse camera system is always appreciated, even in the compact class.

I should mention that the navigation system isn’t standard in the GT, but comes as a standalone option for $525, while the $1,295 Sun and Sound package was responsible for my tester’s powered tilt and slide glass sunroof and glorious sounding 506-watt nine-speaker Alpine audio system. Lastly, my almost fully loaded Dart GT also featured the $1,495 Technology package, packed full of premium features including HID headlamps, automatic high-beam assist, rain-sensing wipers, rear parking sonar, blind spot and cross path detection, plus an intrusion alarm system.

The only option my tester didn’t include was the $1,495 six-speed automatic, and while I’d love to test out this transmission together with this larger engine, I spent a week with it in last year’s 2.0-litre powered SXT and it made the most of the smaller engine’s output, so I can only imagine it would prove more capable with 2.4-litre Tigershark MultiAir.

As far as practical applications go, the Dart doesn’t offer the largest interior in the class but it’s still plenty accommodating with ample room up front and reasonably good rear seating. I fit in back very well, although I’m hardly tall. With a hands-width of headroom above my five-foot-eight frame I’m guessing the rear seats will accommodate six-footers with ease too. Trunk space is ample for the class at 371 litres, while the 60/40 split rear seatbacks fold nearly flat for longer cargo.

And what about all important fuel economy? You pay the price for the larger more powerful engine, its Transport Canada rating being 9.1 L/100km in the city and 5.6 on the highway with the manual and 8.8 and 5.6 with the automatic compared to the base 2.0-litre powered car’s 8.1 city and 5.4 highway manual or 8.4 and 5.8 automatic estimates. That ultra-efficient Aero model ekes out a claimed 7.3 city and 4.8 highway rating with the manual and 7.2 and 4.9 with the auto, incidentally, which gets pretty close to hybrid territory on the open road. Then again we’ll have to see how these numbers stack up against the competition with Transport Canada’s new five-cycle testing protocol that takes effect for the 2015 model year, although their real-world results will be identical no matter what. After a week’s worth of spirited driving my results were closer to the U.S. EPA’s metric-converted 8.7 L/100km combined results, which is still very good.

All in all I have nothing to complain about with the Dodge Dart GT. It’s an excellent car and an impressive performer, if not a full-blown sport compact. Then again its $21,995 starting price is much lower than the Civic Sis and VW GTIs of the world, so let’s not compare apples to oranges. Speaking as a car enthusiast, amongst similarly priced compacts the Dart is a car I’d seriously consider. I sincerely hope Dodge finds as much traction on the sales charts as the GT gave me on the road.
©(Copyright Canadian Auto Press)
Car Shopping Tools