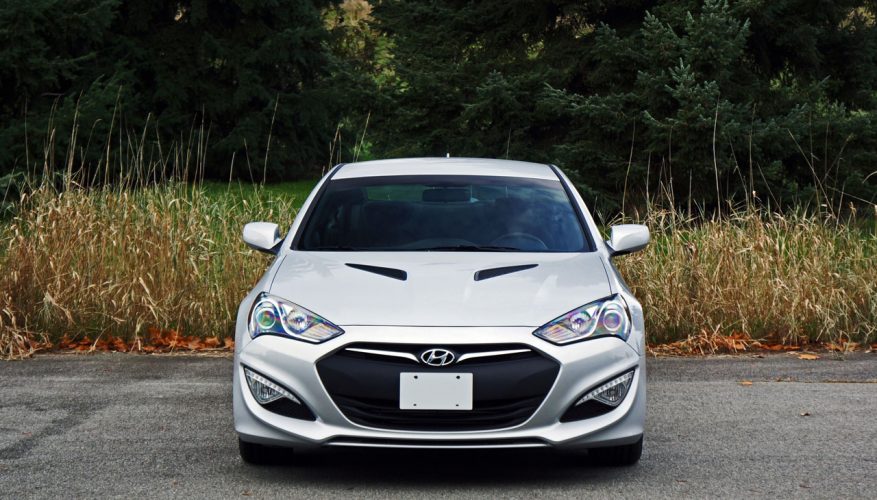 By: Trevor Hofmann
What you’re looking at here is the last of a dying breed. Don’t get me wrong, Hyundai won’t be giving up on the 2+2 sport coupe segment, but like its four-door Genesis luxury sedan the Korean brand’s next generation Genesis Coupe will grow into a more sophisticated premium-level car.

The first sign of this will come in model year 2015, when the 2.0-litre turbocharged model tested in this car will no longer be available. Some will find this a shame, as the 2.0T is lighter than the 3.8-litre V6 and therefore the car is a bit nimbler while still plenty powerful and of course easier on fuel. I once blasted back from Whistler, BC along the famed Sea-to-Sky Highway in a 2.0T with the R-Spec package and made it in record time, a trip that indelibly stamped the Genesis Coupe’s handling brilliance on my cerebral cortex. I’ve since had numerous GCs and enjoyed every minute in them (except a V6 GT that came to me with a bent tie rod which Hyundai Canada humbly fixed and returned), and have recommended the car to many who might otherwise be considering a premium sport coupe.

Since the Genesis Coupe hit the market in 2008 Hyundai has refined the mission of its performance and luxury cars, mind you. In similar fashion to how its Genesis sedan is hitting top-tier luxury brands right where it hurts, the automaker plans to target these same pricey players in the sport coupe segment with a more luxurious and likely larger version of its Genesis Coupe. This is why the four-cylinder will be gone for 2015 and the V6 will become standard, while a new V8-powered version is once again rumoured to be in the works. Oddly, this comes at a time when longstanding premium brands like BMW and Infiniti are adding more turbocharged four-cylinder models to their lineups, so I’m a bit confused as to why Hyundai is taking this tact and I’m guessing that you might very well feel the same after driving this 2.0-litre turbocharged coupe.

The engine sounds fantastic, with a low growl that gets throatier as revs rise. Likewise its pull from standstill is much more enthusiastic than you might expect, although few four-cylinder models offer as much output as Hyundai’s Genesis Coupe 2.0T. A full 274 horsepower at 6,000 rpm and 275 lb-ft of twist available from only 2,000 rpm makes sure that takeoff is brisk, the Korean upstart’s 16-valve, DOHC, dual CVVT-enhanced, twin-scroll turbocharged entry-level mill tromping even the BMW 4 Series’ most powerful four by 33 horsepower and 17 lb-ft, while Hyundai sources the Genesis Coupe’s superb eight-speed automatic from the same Baden-Württemberg-based gearheads that supply the two-door Bavarian; ZF. Shifts are lightning-quick and the steering wheel-mounted paddles add a level of control appreciated with a sports coupe as capable through the corners as the Genesis Coupe.

Under its still sleek and graceful sheetmetal rides a suspension as sophisticated as the engine that powers it, a dual-link MacPherson strut setup with sport-tuned springs and monotube gas-charged dampers up front and a five-link design with the same sport-tuned springs and monotube gas-charged dampers in the rear, the base car’s front benefiting further from a 24-mm stabilizer bar while a 19-mm version maintains stability in back. This base automatic is devoid of the R-Spec’s strut tower brace, which improves handling even further, but both cars’ body structures are made from advanced high strength steel and my tester didn’t even include a sunroof to potentially weaken torsional rigidity, so its taut unibody only aided the chassis designers in their quest for ultimate balance and poise. I also like that the GC’s steering is conventional hydraulic rack and pinion. Feedback is excellent and of course there’s no drivetrain interfering with input in a rear-wheel driven car, so it goes exactly where you point it unless you wag its tail, at which point opposite lock steering enters the fray and the fun meter moves up a notch or three. I know Scion’s FR-S and Subie’s near-cloned BRZ have received the lion’s share of sport coupe limelight in recent years, but Hyundai’s Genesis Coupe paved the way amongst volume brands and remains a serious contender despite measuring a bit more from nose to tail.

Its bigger dimensions mean more room inside, however, a nod to practicality that makes life with a Genesis Coupe a whole lot easier. While both cars offer a spacious front cabin, rear quarters are much more accommodating in the Hyundai, my five-foot-eight frame easily slotting into the rear buckets with room to spare. I’ve tried that trick in both FR-S and BRZ and it’s not ideal to say the least. Ditto for trunk space, the Genesis Coupe good for 332 litres whereas the FR-S can only load up to 196 litres of cargo, while both models feature a single folding seatback.

What’s more, the Genesis Coupe delivers a more upscale and refined environment for driver and passengers, with stitched leather-like soft-touch dash-top and instrument panel plastics plus door uppers that are also soft to the touch, as are the door inserts and nice leather-like stitched armrests. The soft-touch dash plastics extend down each side of the centre stack as far as the lower console too, while attractive gunmetal grey metallic surfaces cover the sporty motorcycle-style binnacles that surround the twin circular dials ahead of the driver, the steering wheel trim and paddles, inner door handles and door pull trim, the gearshift lever accents, and the centre stack and lower console facings, the two surfaces melding almost seamlessly into each other.

That centre stack includes the usual audio interface and automatic HVAC controls, but the tri-dial row of performance-style gauges is an enthusiast’s treat, the leftmost a traditional fuel meter, the centre one for turbo boost, and the right dial for oil temperature – how classic. Classic in mind, the only detractor inside this cabin is an infotainment display that’s a bit on the small side, although this can be upgraded with a larger one if you move up through the Genesis Coupe ranks. All the same, the current Veloster comes standard with a seven-inch full-colour display audio system so it would be nice to see such a system added to the base GC. Back in front of the driver, a thick leather-wrapped steering wheel gets nice thumb spats as well as multi-function capability for the MDI that resides between the tachometer and speedometer, the latter items encircled in cool blue backlighting, all bright and clear.

As mentioned, other than the automatic gearbox my tester was a base Genesis Coupe 2.0T, which starts at $26,699 plus $1,695 freight and pre-delivery prep for the six-speed manual and $28,499 for the eight-speed auto, but as you can surmise by what I’ve just relayed it was hardly without near-premium levels of quality, refinement and features. On top of what I’ve already mentioned the standard features list includes auto up/down powered windows, keyless remote access, heated and powered side mirrors, automatic headlights, automatic climate control, six-speaker AM/FM/MP3 audio with satellite radio, aux and USB jacks, iPod/iPhone connectivity, and Bluetooth hands-free, while many of these latter features can be accessed via steering wheel-mounted controls. Outside, a pretty set of chrome-enhanced shark tooth styled fog lamps and red and clear lensed LED taillights join a gorgeous set of 18-inch rims on Bridgestone Potenza 225/45R18 rubber, these last items framing large four-wheel discs with ABS and electronic brake-force distribution, while the car also benefits from traction and stability control, active front headrests, and a full assortment of airbags.

It all comes together in a sport coupe as attractive as it was when it debuted, although we all know how important “new” is to any segment let alone fashionable sports coupes, and therefore Hyundai will need to update it soon to keep buyers excited. Still, when they do I’ll miss the elegant yet aggressive styling of this car as much as I’ll miss this brilliant 2.0T engine when it gets discontinued for 2015. Here’s hoping we’ll see it show up in the Veloster Turbo or some other hot Hyundai hatch, but right here and now I recommend that you snap up one of these Genesis Coupe 2.0Ts up while you can.
©(Copyright Canadian Auto Press)
Car Shopping Tools