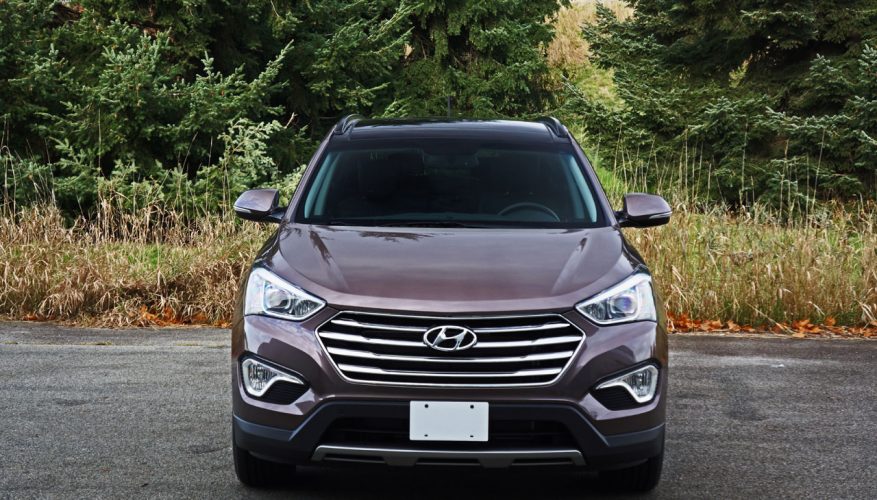 By: Trevor Hofmann
Back in 2007, Hyundai entered the near-luxury crossover segment with its 2008 Veracruz, and while I wrote the CUV up after a particularly impressive national press launch, the Veracruz completely rewrote the auto sector rulebooks about exactly what connotes a luxury vehicle. Since then the South Korean brand has continued to shake up the premium status quo with cars like the Genesis sedan and Equus, while the Veracruz was replaced last year with the even more enticing Santa Fe XL.

I must admit I was a bit concerned when I heard that Hyundai was replacing its then new Veracruz with a longer wheelbase Santa Fe, but I hadn’t seen it yet. The new Santa Fe’s completely reworked styling easily had me forgetting the Veracruz, while newfound size and substantive road presence targeted it directly at other large-midsize crossovers such as Honda’s Pilot and Toyota’s Highlander. Hyundai’s reasoning for dropping the Veracruz made sense, the model hardly showing up on the radar of family shoppers while the Santa Fe had long been a household name, the change reducing Hyundai’s overall product development costs as well as its localized marketing budgets, while more importantly bringing a sense of familiarity to Hyundai’s seven-passenger CUV before it even hit the road.

To make sure the popular five-seat Santa Fe didn’t lose any fans by forcing would-be buyers into a larger seven-passenger CUV, Hyundai split up the offering into two sizes, the smaller model being the Santa Fe Sport and the larger one getting the apropos Santa Fe XL moniker. The XL’s wheelbase is stretched 100 millimetres while its overall length expands by 215 mm for a longer, leaner look and a much more accommodating cabin.

Before I delve into the expected interior roominess aspects of the XL design, I thought I’d touch a bit on the unexpected styling differences between the two Santa Fe models. It would’ve been easy for Hyundai to have simply stretched the five-seater by the aforementioned parameters and called it a day, but they understood the larger ute is targeting a different, often more mature and slightly more conservative family buyer replete with three-plus children, the oldest of which are at least tweens if not teens. Therefore the grille, while still framed in the brand’s now familiar trapezoidal shape, gets four narrow chromed slats instead of three thick ones, losing some of its truck-like brusqueness for a classier appearance that likely appeals more to women, whereas the fog lights are shaped similarly to the chrome-embellished shark’s tooth-styled lenses on the Genesis Coupe than the five-angled knife blade fogs on the Santa Fe Sport. Most everything else looks the same from the front until partway through the rear section, at which point the elongated Santa Fe XL utilizes a more conventionally shaped rear quarter window and wraparound taillights with fewer hard angles. To look at both from the rear you wouldn’t think they’re from the same family of CUVs, but their fraternal sameness is readily apparent up front.

Likewise, once inside the two sport utes are more than just kissing cousins ahead of the second-row seatbacks. I recently drove and reviewed a Santa Fe Sport 2.0T SE, and the similarities between the two were blatant, although that model’s turbocharged four-cylinder engine and unique SE trim line are not available with the XL. Rather, the larger CUV comes standard with Hyundai’s 3.3-litre V6 in base FWD, Luxury and Limited trims, as well as variations on these that include a six-seat option with twin second-row buckets on Luxury and Limited models, and a Limited with Saddle Leather upholstery and trim.

My tester was dressed up in one of the most popular trims Hyundai Canada sells, Luxury, which along with its $39,899 price tag (plus $1,795 for freight) includes many of the types of features expected as standard and optional equipment in premium-level crossovers, such as all the usual powered accessories including powered and heated side mirrors, plus automatic headlights, an auto-dimming rearview mirror with an integrated HomeLink garage door opener and compass, a leather-wrapped tilt and telescopic heated multifunction steering wheel, a leather-wrapped gearshift knob, leather upholstery, a 12-way powered driver’s seat with four-way lumbar support and memory, heated front seats, dual-zone automatic climate control, a multifunction trip computer, a display audio system with an integrated reverse camera system, satellite radio, aux, USB and iPod/iPhone connectivity, and Bluetooth hands-free, plus sliding and reclining second-row seats with heated outer cushions, rear side window sunshades, third-row HVAC vents and controls, a powered tailgate, a handy 115-volt power outlet in the cargo area, a panoramic sunroof, LED positioning lamps, turn signals integrated into the side mirror housings, lots of chrome exterior detailing, 18-inch alloy wheels on 235/60R18 Kumho Crugen all-season tires, downhill brake control and hillstart assist control, rear parking sonar, blind spot detection, Vehicle Stability Management with electronic stability control and traction control, ABS-enhanced four-wheel disc brakes with electronic brake-force distribution and emergency brake assist, plus all the usual airbags including one for the driver’s knees.

All of these features wouldn’t be half as impressive if the Santa Fe XL wasn’t able to measure up to near-premium levels of fit, finish and materials quality, but Hyundai does a credible job of delivering the types of feel-good surface treatments expected in the class above. For instance, the dash-top is completely soft to the touch, which isn’t the case with all premium-branded seven-passenger CUVs, while that attractive, nice feeling and sound absorbing material flows down the front of the instrument panel too, as well as along the door uppers front and rear. The armrests are covered in a very upscale leather-like material with contrast stitching highlighted by great looking satin silver finished door panel trim, resulting in one of the most attractive door panel designs in the industry. The door handles and power window switches get the satin silver treatment too, and the latter are exquisitely detailed, while the same metallic surfacing coats other areas through the XL’s cabin, including the primary gauges, steering wheel accents, dash and vent trim, lower console trim, and more. It’s all tastefully applied and only upstaged by the beautiful woodgrain trim to the left of the instrument cluster and right of the centre stack ahead of the front passenger. It’s not real, but I had to investigate to make sure. Hyundai has done an extremely good job creating this faux wood, even giving it a substantive feel that passes the “knock test”. Normally I don’t like fake wood, but the Santa Fe’s is done so well I was wishing more could be found throughout the cabin.

That 12-way powered driver seat I mentioned previously is ultra-supportive, while all the seating positions offer a high level of adjustability and comfort. Even the third row allowed my five-foot-eight frame inside, but it’s not the roomiest rear seat in the industry and should probably be reserved for kids unless you minimize adult use to short hops around town.

Driving in mind, the Santa Fe XL moves along at a fast pace thanks to its standard 3.3-litre direct-injection V6. The engine sends a ready and willing 290 horsepower and 252 lb-ft of torque through a smooth shifting six-speed automatic transmission with Shiftronic manual-mode, culminating at the front wheels in base trim and all four wheels in any trim above. The ride is smooth and comfortable yet handling is similar to others in this class, not particularly sporty but totally capable through twists and turns, while braking is more than adequate unless hard-charging down a mountainside road where fade will make itself known.

Of course that’s not the way most will drive the XL, parents more concerned with fuel economy than slamming through curves or straight-ahead acceleration. To that end Hyundai includes their Active Eco indicator switch to the left of the steering column, helpful in eking out as much efficiency from big family hauler as possible. Transport Canada rates the XL at a rather optimistic 11.8 L/100km in the city, 8.0 on the highway and 10.1 combined, although you shouldn’t expect to achieve these numbers without using hypermiling techniques. A new five-cycle testing protocol replaces our government’s embarrassingly unrealistic two-cycle system for 2015, so expect more accurate real-world estimates when the new model year XL debuts.

The 2015 Santa Fe XL will remain more or less the same as this one by the way, along with its practical tri-row layout and much-improved cargo capacity. It includes 383 litres of gear hauling space behind the third row, which is about the size of a Hyundai Accent Sedan’s trunk, and when you lay that third row flat there are 240 additional litres of cargo space over the five-passenger Santa Fe Sport, the new total measuring 1,159 litres. With both rear seatbacks tumbled forward the XL can load a maximum of 2,265 litres of life’s baggage, not to mention 51 litres of hidden storage below the cargo floor. Those rearmost seatbacks are configured in the usual 50/50 split, incidentally, but the second row gets the same 40/20/40 split as the Sport for truly versatile passenger/cargo capability.

I could only come up with a single complaint during my test drive, and it has more to do with current trends to push mainstream volume models into premium territory, a business model Hyundai has been responsible for creating with the aforementioned Veracruz and others. Where some manufacturers have just started adding large full-colour infotainment displays in their base models, Hyundai is still charging extra for the nicer system. My Luxury model had a rather small 4.3-inch display audio touchscreen that also housed the reverse camera system, making it look a little less advanced and not function at quite as high a level. This said, moving up to the trim level that includes the larger screen costs less in the Santa Fe XL than many competitors, and at that level you’ll be driving a CUV with premium levels of equipment, so my complaint really turns into a moot point by the time you add up the numbers.

The base FWD Santa Fe XL starts at only $31,099 plus freight, while a totally loaded Limited with Saddle Leather can be had for just $43,499. Compare that to a many of its peers and it will quickly become apparent you’ll save anywhere from thousands to tens of thousands if you opt for the Korean brand’s seven-passenger crossover.

That value proposition is what causes many buyers to investigate Hyundai in the first place, and once they purchase few ever go back to the brand they came from. Vehicles like the Santa Fe XL are testament to why they stay, while brand reliability is better than average and Hyundai’s five-year, 100,000 km comprehensive warranty is one of the best in the industry.