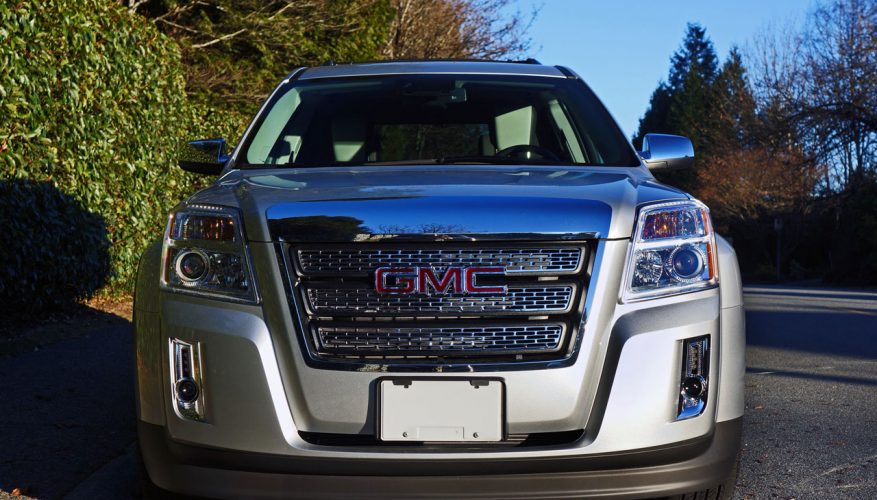 By: Trevor Hofmann
Despite GMC’s compact crossover SUV showing up just about everywhere you look, it really hasn’t been with us that long. The General’s truck and SUV brand brought it out in late 2009 as a 2010 model, and it’s sold very well since then despite not having any significant upgrades over a five-year run. No major changes are planned for the 2015 model year either, so those looking to save a little on a 2014 model of this near midsize CUV don’t have to worry about their new ride looking dated shortly after driving off the lot. Actually, the next-generation D2XX-based Terrain is at the very least one, and quite possibly two years away.

The Terrain’s solid sales numbers are a good sign that GMC endowed it with a look people like and all of the features they need and want, not to mention a price point they can live with. One thing the 100-plus year old marque understands is how to position its products to appeal to its loyal owners, and to that end the Terrain can be had in five trim levels with either front- or all-wheel drive, the list including SLE1, SLE2, SLT1 and SLT2 trims, as well as the top-line chrome-embellished Denali.

I drove a Denali recently too, but I’ll reserve comment on this model until later as I really want to fill you in on the fully featured SLT2 model I spent a week in. For starters, the only compact SUV that could make my Terrain SLT look anything less than the bold and daring design it is would be a Terrain Denali, both models hitting the road with big, brash, brawny chromed grilles and equally muscular squared-off fender swells, making me pretty sure the ghost of Hummer continues to reside within the glass walls of 100 Renaissance Center, albeit only haunting the GMC division. The truck and SUV unit made nice big chrome 18-inch five-spoke alloys standard on SLT2 models for 2014, riding on Michelin Latitude 235/55R18 rubber for a meaty look that matches the rest of the crossover’s dramatic styling elements.

Inside the drama continues, although the Terrain seems to be conjuring up the ghost of GM’s old performance-oriented Pontiac brand with a tri-tone dark and light grey combination boasting red stitched highlights on the leather-like primary instrument binnacle shroud, seat bolsters, and door panels. It’s a custom look that suits the Terrain’s exterior styling to a T, enhanced by a bright red LCD cluster between the big analog tachometer and speedometer dials that also feature red needles, while red backlit switchgear on the centre stack and overhead console, plus red RNDM selections below the lower console-positioned gear lever (P is in white) continue the “We Build Excitement!” theme. Plenty of silver-finish metallic and chromed detailing gets added for level of bling that befits a SEMA show SUV, while nice leather seating surfaces complete the near-luxury experience.

As you can imagine, GMC doesn’t exactly give the Terrain SLT2 away, with 2014 pricing starting at $38,995 plus $1,700 for freight and pre-delivery prep. My Silver Sky Metallic finished tester also included GMC’s fully featured IntelliLink seven-inch touchscreen infotainment system with navigation, reasonably priced at $795, plus a $1,750 rear entertainment system with dual flip-up displays integrated onto the backs of each front seat, plus a $345 Cargo Management Package that includes a roll-up cargo cover, cargo net and roof rack. My tester didn’t include the optional V6 engine at $1,725, or the trailer-towing package at $420, yet the price still climbed to $43,585 including freight.

While this MSRP is high for a compact SUV that doesn’t wear a premium badge, GMC doesn’t hold back on premium features either. All SLT2 trims come with a chrome-enhanced grille, chrome mirror housings, chrome door handles, chrome roof rack side rails and a chromed rear skid plate, plus those chromed 18-inch rims I mentioned before, while convenience features include driver’s seat and side mirror memory, ambient lighting inside the door handles and door storage bins, a powered glass sunroof overhead, a remote garage door opener, rear parking sonar, a powered liftgate, forward collision warning and lane departure warning. I should mention here that the forward collision alert system in my tester was a bit too sensitive even when set to its longest most unobtrusive setting, its most annoying moment occurring when it went off in the middle of a curve after detecting a parked car off to the side.

Along with these exclusive SLT2 upgrades come items from the SLT1, including the leather seating surfaces I mentioned a moment ago, plus three-way heated cushions up front and remote engine start. SLE2 features that also come as part of the pricier SUV include a leather-wrapped steering wheel, an eight-way powered driver’s seat (but no powered passenger seat, even in my near top-line SLE2), automatic climate control (but only with a single mode), and IntelliLink infotainment sans navigation but including eight-speaker audio with a sub, plus new for 2014 is the Siri Eyes Free system.

This model and all Terrains include the usual safety features, such as ABS-enhanced four-wheel disc brakes, traction and stability control, tire pressure monitoring, and the normal count of airbags. GM’s OnStar telematics with handy turn-by-turn navigation comes standard too.

I mentioned way back that a V6 was optional, and while my tester never included it I’ve driven this engine in the Terrain before. It’s GM’s well-proven 3.6-litre six-cylinder that’s good for 301 horsepower and 272 lb-ft of torque in this state of tune, but the more fuel-efficient option is the 2.4-litre four fitted to my Terrain SLT2. It makes a reasonably potent 182 horsepower and 172 lb-ft of torque, ample for quick response off the line and good enough on the highway, while the six-speed automatic that transfers power to the front or all wheels from either engine is another time-tested component, not as advanced as some competitors’ eight-speed autos yet nevertheless up to the challenge of delivering nearly unnoticeable smooth steady shifts.

As mentioned the 2.4 is the more fuel-efficient of the two, its claimed rating equaling 9.2 in the city and 6.1 on the highway with front-wheel drive or 10.1 and 6.9 with all-wheel drive, whereas the V6 uses an estimated total of 12.4 city and 8.1 highway with FWD or 13.2 and 8.4 with AWD, while both benefit from less expensive regular fuel. We should all know by now that these numbers are anything but realistic estimates, Transport Canada having modified the testing process from a two-cycle protocol to a new more rigorous five-cycle system, so don’t go comparing this 2014 model’s rating to any other 2015 model or you’ll end up being disappointed by its real-world results.

You won’t be disappointed by the Terrain’s stowage capacity, mind you. It’s large inside, with a maximum of 1,810 litres (63.9 cubic feet) available when its 60/40 split-folding rear seatbacks are lowered into their semi-flat positions (the load floor has a sizable bump where the seatbacks meet up with the load floor), or 895 litres (31.6 cubic feet) when all five seating positions are in use. Its payload is a maximum of 520 kilograms (1,146 lbs), so if you need to haul more on a regular basis take note that the four-cylinder Terrain can only manage the usual 680-kilo (1,500-lb) trailer this class of vehicle allows. The V6-powered Terrain can tow up to 1,588 kilograms (3,500 lbs) mind you, so it’s the one to go for if you have a small boat or camper.

Soon going into its sixth year the GMC Terrain has held up very well. Its bold styling is one of the reasons the current design has staying power, resulting in a compact crossover that makes a strong statement about its owner. Still, the interior needs to be upgraded with more soft-touch surfaces to compete head-to-head with newer, fresher competitors, and despite offering a lot of nice features it’s falling behind a bit in the tech department having no proximity-sensing access, pushbutton start or full-colour multi-information display, while it should really offer more of the items expected of a vehicle cresting the $40k barrier such as that powered front passenger’s seat I mentioned earlier or for that matter a panoramic glass sunroof. A five-year, 160,000 km powertrain warranty is a big free bonus that would cost you a lot if added to a different brand, mind you, plus the Terrain’s sheer size delivers loads of real substance most competitors simply can’t measure up to. Small wonder it sells so well.
©(Copyright Canadian Auto Press)
Car Shopping Tools