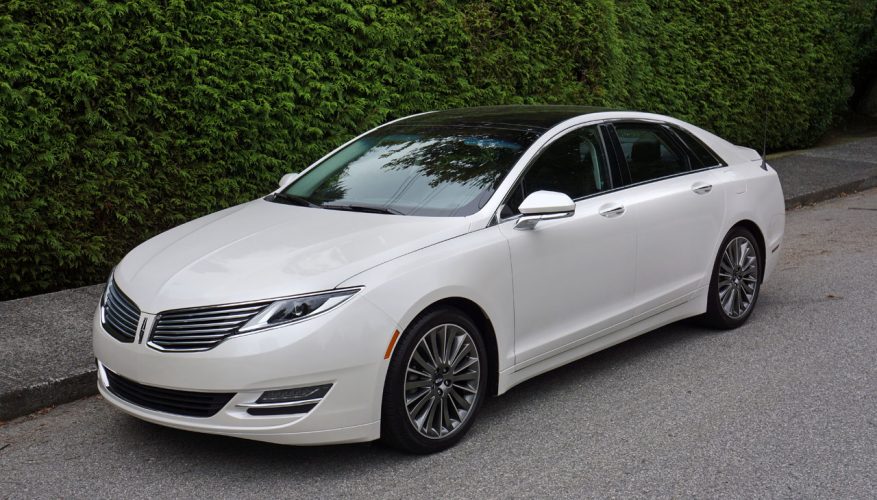 By: Trevor Hofmann
This car should be black. Then it could silently whir through the set of Andrew Niccol’s 1997 sci-fi thriller Gattaca almost unnoticed, its retrospectively futuristic stylings seemingly perfect for this über-kool art noir modern-day classic.

Do you think the new Lincoln MKZ Hybrid is a modern-day classic? Is it a car we’ll aspire to own 45 years from now, like the ’69 Mk III? I adore the Mk III and really like the new Lincoln MKZ, particularly from its rear quarter view, but I’m not one to prognosticate about future collectables.

While a Ford Fusion underneath, the MKZ’s genetically engineered skin doesn’t look anything like its mainstream cousin, not unlike how the old Mk III didn’t look anything like the equally stunning Thunderbird it was based on. And rather than no-cost Tuxedo Black my tester wore White Platinum paint, a $600 option that’s well worth the money as it makes this Lincoln look positively radiant.

Inside, the MKZ Hybrid is shaped with similarly smooth surfaces as its exterior sheetmetal, and the result is a look that uses minimalism to dramatic effect. This car is almost completely devoid of sharp surfaces, and thanks to touch-sensitive controls the matte grey centre stack is so efficiently simple that it nearly seems unfinished. The obvious lack of a gearshift lever makes a person wonder why we still bother with such antiquities. Instead, a set of dash-mounted buttons is used for selecting the usual PRNDL modes. Lincoln eschews the usual steering wheel-mounted paddles that no doubt would offer a more user-involved experience for greater control through the corners, or at least allow short shifting to save on fuel. I’m guessing they know their clientele, not to mention are wise enough to realize that any money used for prodding a continuously variable transmission through a set of mock gears could be better spent elsewhere.

Those dash-mounted transmission buttons certainly help to differentiate the MKZ from the Fusion that lies beneath, but unfortunately they’re not enough to hide its blue-oval roots. Details such as the interior door handles along with the power window, power mirror and door lock switches are identical to those used in the Fusion, whereas the steering column stalks don’t only carryover from the lesser Fusion but are exactly the same as used by the compact Focus. Less noticeable, the MKZ’s upper door panels look similar to those found in the mainstream midsizer, as are the dash and instrument panels, and both steering wheels as well. Fortunately for the premium-badged car, all the blue-oval-sourced components are very well executed.

Helping to separate these two models, Lincoln has wrapped all the roof pillars in the same attractive woven cloth as the roofliner, while luxury-level soft-touch plastics cover just about every other surface that’s not finished in brushed metal or genuine wood. What’s more, Lincoln even went so far to apply the pliable plastic down to the lower dash and lower door panels, not to mention the glovebox lid. The MKZ Hybrid’s nearest rival, Lexus’ ES 300h doesn’t raise itself above its common Camry character quite as well.

In much the same way, the MyLincoln Touch infotainment system takes the best of what’s in the MyFord Touch system and makes it better, thanks to the touch-sensitive switchgear I mentioned earlier. Likewise, for the excellent multi-function display directly ahead of the driver and primary gauges surrounding that, not to mention all of the other shared technologies incorporated into both cars. The infotainment system, for instance, uses a bright and clear eight-inch touchscreen for its full menu of capabilities.

My tester was fully dressed in the appropriately named Preferred trim package, the other three options being Reserve, Select and Premiere in a descending order of desirability. Additional Preferred items include a heated steering wheel, heated rear seats, and a 110-volt power point for plugging in a laptop, electric toothbrush, shaver, hairdryer or any other household device you might need to use in between meetings or on a road trip, while other luxuries such as my tester’s thick wood enhanced powered tilt and telescopic steering wheel, dual-zone automatic climate control, heated and cooled 10-way powered front seats with two-way lumbar support and driver’s seat memory, ambient lighting, parking sensors, auto-dimming rearview mirror and driver’s side auto-dimming mirror, blind spot information with cross-traffic alert, and powered trunk lid added a great deal to the MKZ Hybrid’s high level of luxury. Additionally, the big display on top of the centre stack housed a rearview camera and navigation system, as well as exclusive use of Lincoln’s top-line 700-watt 14-channel THX II audio system with satellite radio, and believe me when I tell you it can shake (but not rattle) this four-pointed star adorned car’s doors when the touch-sensitive volume controller slides towards the right.

When the music’s not thumping the MKZ Hybrid is an extremely quiet car, much thanks to a tight overall structure that aids in the feeling of overall refinement. While capable in the curves, partial credit going to a big meaty set of Michelin Green X 245/40R19s on 19-inch polished alloys, the MKZ Hybrid feels best around town and on the highway, where it’s silky smooth operation makes driver and passengers feel comfortable and coddled despite ample roominess in all directions.

Unlike the previous MKZ I tested, the Hybrid doesn’t incorporate all-wheel drive or a six-speed automatic with paddle shifters, but instead drives the front wheels via the electronic continuously variable transmission (e-CVT) I commented on earlier. That more conventional model also employed an optional 3.7-litre V6, good for 300 horsepower and 277 lb-ft of torque, while my tester’s electrified drivetrain was comprised of a less energetic Atkinson-cycle 2.0-litre four-cylinder matched up to a permanent magnet AC synchronous electric motor powered by a 1.4kWh Lithium-ion (Li-ion) battery pack. This is not a powertrain designed for performance first, being that combined output hums along at 188 horsepower, but torque feels strong off the line and it certainly holds its own on the highway. Where the MKZ Hybrid shines is at the pump, of course.

Its fuel economy numbers are actually quite shocking. The 2014 estimates are 5.1 L/100km in the city, 5.3 hwy and 5.2 combined, and despite being tallied up using the now outdated two-cycle testing method that has since been replaced by a five-cycle process, they’re fairly accurate. My 6.2 L/100km combined average, experienced via equal parts city and highway plus ample hills and dales, was close to the new 2015 average of 5.7 L/100km city, 6.0 hwy and 5.8 combined. These figures also fare quite well when put up against the MKZ Hybrid’s main competitor, the aforementioned Lexus ES 300h, which is rated at 5.9 L/100km city, 6.0 highway and 5.9 combined for the 2014 model year and 5.8 city, 6.1 highway and 5.9 combined for 2015.

Now that we’re being pragmatic, the MKZ’s cargo carrying capacity, while down a bit from the conventionally powered MKZ at 314 litres compared to 436, is nevertheless more flexible than the aforementioned Lexus. First off, the ES 300h doesn’t offer folding rear seatbacks, the MKZ Hybrid’s split 60/40 for ample cargo/passenger utility, while secondly Lincoln goes a step further by including a separate pass-through behind the rear seat folding armrest for narrower items. This allows four people seated and some skis in between the rear two, or even more practically speaking, the ability to pick up long items from the hardware store (like mouldings) on the way back from a family event.

Soaking in the MKZ Hybrid, it’s hard to believe it was only a decade and a half ago that the first hybrids came to market. These were nicely outfitted (for the time) economy cars, nothing like what Lincoln pampers us with here with this fully featured luxury sedan, and while efficient, the first four-door hybrid didn’t offer fuel economy numbers that were much better than this big premium sedan’s impressive rating.

As good as the MKZ is, especially with this hybrid drivetrain, Lincoln sells them at less than half the rate as Lexus does ES models, this last month of October resulting in three times the take-rate by the Japanese model. This just doesn’t make sense, and goes to prove that most buyers don’t spend the time needed to research all that’s on the market in a given segment. I’m not going to say the MKZ Hybrid is a better car than the ES 300h, but having driven both numerous times in various states of trim I can attest to the American being is every bit as good, while delivering a higher level of interior refinement, more advanced in-car technology, greater passenger/cargo flexibility, and measurably better fuel economy at a much more reasonable price point, 2014 models which incidentally start at an MSRP of $38,460 plus $1,750 for freight and pre-delivery prep for either the conventionally powered MKZ or the MKZ Hybrid. If more people did their homework there would be more MKZs on the road.

Styling will be the deciding factor for many, the Lincoln anteing up with an avant-garde design that immediately sets itself apart from the midsize mainstream, and the Lexus offering up a more conservative yet still attractive shape. My leanings are towards the more interestingly penned MKZ Hybrid, which also benefits from an exclusivity factor, it’s slower sales meaning that you won’t see one coming around every corner.

I’m not going to even try to tell you what to buy, but I do recommend you give the Lincoln MKZ Hybrid a good long look and an even longer test drive. It’s totally worthy of your attention.
©(Copyright Canadian Auto Press)
Car Shopping Tools