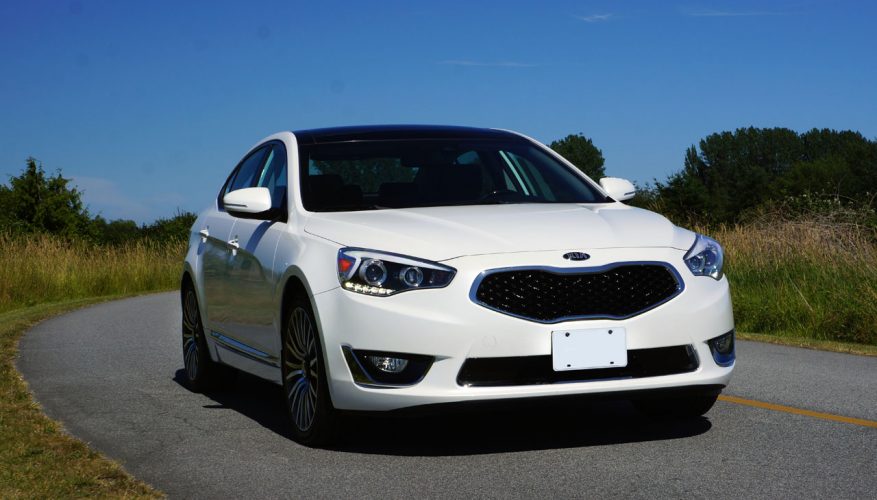 By: Trevor Hofmann
With all the talk surrounding Kia’s latest K900 luxury sedan it might be easy to forget about the slightly smaller front-wheel driven Cadenza, but that would surely be a mistake. Not only will the Cadenza easily outpace the pricier K900 on the sales charts but it’s an especially refined luxury car all on its own, and likewise does a similarly excellent job of imitating, or should I more appropriately say emulating its premium-badged luxury competition.

Where the softly sprung K900 most decidedly targets the pampering perfection offered up by the Lexus LS 460 instead of the autobahn-born German class originators, the Cadenza hones its HID headlights in on top sellers like the same Japanese luxury brand’s ES 350 and Lincoln’s MKZ. It’s not the first up and comer to target the comfortable front-drive Lexus, the MKZ also falling into this camp, and won’t likely be the last, even Toyota’s own Avalon making a credible case for staying with a mainstream nameplate, but as with each and every one of Kia’s models the Cadenza delivers more premium features than expected for a lot less money than the competition.

Truly, cars like the Cadenza are why once popular brands such as Saab don’t exist anymore and previously strong luxury marques like the aforementioned Lincoln and to some extent Volvo are now on life support. Case in point, for a mere $45,095 plus $1,485 for freight and pre-delivery prep my Cadenza Premium test model came so heavily outfitted with top-tier features that many premium brands would be better off hiding away for fear of embarrassment. The menu includes auto-leveling adaptive HID headlamps, an electric parking brake, and a three-way ventilated driver’s seat with memory, that latter of which also adjusts the heated and powered tilt and telescopic steering column and power-folding side mirrors. A powered knee extension for the driver’s seat is also included, along with two-way heated rear window seats and premium Nappa leather covering all seating surfaces for soft supple comfort, while a powered rear window shade makes the car’s only negative anomaly, the lack of side window shades, all the more apparent.

This oddity aside, the Cadenza Premium’s Supervision TFT LCD primary instrument cluster makes for the latest in colour-enhanced style and user-configurable functionality, while intelligent cruise control follows form with the type of function that can make the difference between arriving at your destination filled with energy or tired out from concentrating too much on things you shouldn’t have to, such as speed limits and having to personally hit the brakes to slow down for cars ahead; instead the system takes care of such manual labour on your behalf.

Surrounding traffic in mind, the Cadenza Premium includes blind spot detection and lane departure warning, while a sweet looking set of 19-inch alloys riding on 245/40R19 Hankook Optimo rubber make sure it stays planted to the tarmac during high-speed cruising. That this model also includes self-cleaning hydrophobic front door glass puts it over the top in my books, a sign that Kia isn’t merely looking to wow its customers with me-too features for a better price, but rather show would-be buyers and rivals alike that its innovations clearly set it apart from the competition.

What Kia is doing even better than its key mainstream competitors as well as relative newcomers to the premium sector like Acura is offer a defined brand identity that’s truly attractive. Thanks to ex-Audi designer Peter Schreyer and some of the many additional talented staffers in the Korean company’s now global design department, Kia’s new sense of style sets it apart in an otherwise bland or overreaching mainstream sector. Where some brands bounce back and forth between safe albeit yawn-inducing designs and sometimes outlandishly futuristic stylings, Kia seems to have found its way with a nicely balanced look that’s at once modernistic and classically elegant. Its brand-wide design language is no better illustrated than with the Cadenza, a car that stylistically fits nicely in between the more imposing K900 and edgier Optima, appearing somewhat like a full-size Forte sedan from front to rear.

Unlike its smaller siblings the Cadenza offers no four-cylinder variant, but rather a powerful V6 comes standard. With 3.3 litres of displacement the dual-cam variable valve timing-infused direct-injection engine makes a sizable 293 horsepower and 255 lb-ft of torque sent to the front wheels via a six-speed automatic transmission with steering wheel-mounted paddle shifters. Its already more exciting sounding than its front-drive premium competitors, and you haven’t even heard it wind out at full song. This engine is a jewel, with strong linear power delivery and the associated exhaust note of six-cylinder mills found in premium German and U.S. brands, but also benefiting from fuel economy similar to some four-cylinder sedans at 11.2 L/100km in the city and 7.4 on the highway. Even when factoring in new more realistic 2015 model year five-cycle Transport Canada testing the Cadenza shines, the revised rating now claimed to be 12.7 in the city and 8.4 on the highway, it’s hard to knock this big sedan’s performance at the pump or off the line.

One of the reasons its fuel economy numbers are so good comes down to overall mass, the Cadenza weighing in at a rather svelte 1,664 kilograms (3,668 lbs), which places its curb weight between the slightly smaller Lexus and Lincoln models I mentioned before, and makes it considerably lighter than most similarly sized vehicles in the luxury class.

It would therefore make sense that the Cadenza is competent around corners too, which I’m happy to report it is. A fully independent suspension with MacPherson struts up front and a multi-link setup in the rear, complemented by stabilizer bars at each end does a fine job of keeping the big four-door mostly flat through the curves and comfortably within its chosen lane, even when pushed harder than most will likely ever drive this car. The electric power steering is amply numb, but Lexus has proven that most luxury buyers want the pampering feel of dead on-centre feel, so good on Kia to provide what the customer wants. Like with all front-wheel driven cars the Cadenza tends to understeer at the limit, a good thing because it means you’ll be able to safely ease off on the throttle when push comes to slide, although standard electronic stability control with Vehicle Stability Management (VSM) joins traction control, Hill Assist Control (HAC), and ABS-enhanced four-wheel discs for as much active safety kit as you’ll likely ever need; albeit premium brands like BMW and Mercedes-Benz would no doubt beg to differ.

Their $37,895-priced cars are relative compacts with nowhere near the standard features this big Kia offers in base trim, mind you. Along with the previously listed active safety items come passive safety features such as eight airbags with the unusual inclusion of two in the rear thorax area, while additional standard kit includes a long list of the usual luxury fare including automatic headlights, rain-sensing wipers, dual-zone automatic climate control, illuminated door scuff plates, power-folding and heated side mirrors with integrated LED repeaters, additional LEDs for the daytime running lights, positioning lights and light bar taillights, and much, much more, whereas the differentiators between the Cadenza and its similarly priced German competitors (other than size) include standard proximity sensing access and pushbutton ignition, standard leather upholstery, an eight-way powered driver’s seat and four-way powered front passenger’s seat, infotainment with standard navigation, 12-speaker Infinity audio, a rearview monitor, and standard rear parking sonar.

Along with this is a cabin that’s so quiet it’s eerie, with noise, vibration and harshness levels almost totally absent whether sourced from ahead in the engine compartment, underneath where the tires meet the road or around the greenhouse via howling high-speed winds. No doubt the soft touch dash top does its part in absorbing sounds, as do the pliable door uppers front and rear, but the centre dash panels and glove box lid plus all the lower dash and door panels are made from harder plastic, albeit nicely textured in a way that they’re not immediately noticeable as sub-premium standard. Kia makes up for this with roofliner material that wraps down each padded pillar, but then again its high quality “mouse fur” rather than the attractive weave we’ve come to appreciate from premium brands. Then again, as I wrote in my notes, “If the wood isn’t real I’ll be shocked, because it looks and feels as good as anything in the industry,” making me glad to report that I’m not losing my senses, the wood is genuine both on the steering wheel and across the dash and doors.

Truly, my only complaint was that the rear seatbacks don’t fold, something I require due to an active addiction to skiing. Kia does provide a pass-through above the rear armrest when folded down, sizable enough for two or possibly even three pairs of skis in a pinch. The trunk is otherwise large, measuring some 450 litres (15.9 cubic feet) in volume, which incidentally makes it 14 litres (0.5 cu ft) larger than the Lincoln MKZ’s boot and 20 litres (0.7 cu ft) more accommodating than ES 350’s luggage compartment, although the Lincoln’s cargo hold at least offers split-folding rear seatbacks.

On the positive the Cadenza features one of the best TFT gauge packages I’ve ever seen, with a clear, crisp attractive graphic display. I loved how the preset cruise control speed is highlighted in orange around the speedo, and shows you where you are relative to the speed when the brakes are automatically applied. I also liked how the throttle comes back on progressively when traffic clears in order to get the car back up to speed, instead of being hell-bent on getting the car back up to its preset velocity no matter the cost to fuel economy or luxurious serenity, a problem with some premium branded luxury cars.

No, you might find this difficult to believe, but Kia thoroughly understands luxury, proven with this very impressive Cadenza Premium. While it delivers strong performance for the class, it’s a bonafide luxury sedan through and through, equal to its front-wheel driven premium-branded competitors and better than most of its fully featured premium wannabe rivals in the mainstream sector. That it’s not trying to copy the styling of one of the premium brands it emulates in most every other way is another feather in Kia’s red and white oval-badged cap, allowing you to roll up in a unique and creatively styled luxury ride that will have people asking, “What is that?” in a clearly positive open-minded manner, followed by a look of shock and awe that must make Kia ownership an all-round delight. I certainly enjoyed my week with the Cadenza. It’s a truly remarkable luxury car from a very unlikely source, and I can’t help but to highly recommend it.
©(Copyright Canadian Auto Press)
Car Shopping Tools